Our elliptical broke a month back, which was pretty much my only source of low impact exercise other than yoga.  I’d been doing 30 minutes of elliptical after Julius went to bed, when it was too dark to do anything else.  I’m really desperate not to end up with the crazy amount of swelling I had last pregnancy and I’m hoping exercise will help.  (I’m not sure it is though because I’m already getting carpal tunnel again…but I’m trying to remain positive.)  Either way, I also don’t want to gain 50 pounds again (even if 1/4 of it was water).  I started looking for other ways to exercise while we waited a couple weeks to get a new one.  First I tried power walking with a headlamp, but we don’t actually have any sidewalks around us which made me nervous (well that and paranoid thoughts about insane pregnancy fetishists).  Next I started doing stair walking – I found I can walk up and down the stairs about 75 times in 25 minutes.  (As boring as it sounds I actually didn’t mind that one.)  I also dug out my bike and the ancient Kiddie Kart bike trailer my parents gave to us.  Julius loved it!

We only used the trailer for one weekend when Julius was a little guy and we went to Block Island.  (Sidebar – when this pandemic is over, I am going to Block Island no matter the time of year.  Have I mentioned how it is my favorite place on Earth?)  While trying to find alternate forms of exercise I took him (and sometimes Dany) in it on rides around the neighborhood, to nearby hikes, on picnics, to the ice cream shop and even to our favorite local fruit farm – George Hill Orchards!  The trailer is one that my parents pulled me and my siblings around in when we were little.  It used to have a canopy on it, but that was long lost or torn to shreds.  Before our trip to Block Island I made a new shade canopy out of some waterproof material from an old EZ-up tent whose frame broke.  The material inside the trailer was also torn to shreds, being 3 decades old, so after Julius asked me to fix it, I also replaced that.  A little bit more elbow grease and I don’t think the thing looks half bad!

Getting ready for the maiden voyage. He’s such a little guy. (Before – except with a canopy)

For this portion I took the old waterproof material I had from an EZ-up tent canopy and quickly made a pattern by measuring out the back of the trailer, how far I wanted the canopy to cover and calculating a half circle size to make up the canopy.  It looked like the diagram below.  I added ties at the red x’s to attach it to the bike frame, and folded and stitched the long edge under 1.5″ so I could slide a piece of 1/2″ PVC inside to form the hoop structure.  I stitched each end of the hoop enclosure closed, and attached a small length of clothesline rope.  To attach the canopy to the bike I tied the back ties onto the bike trailer poles, and drilled holes to thread the clothesline rope through on either end of the trailer, knotting each side to keep it in place. 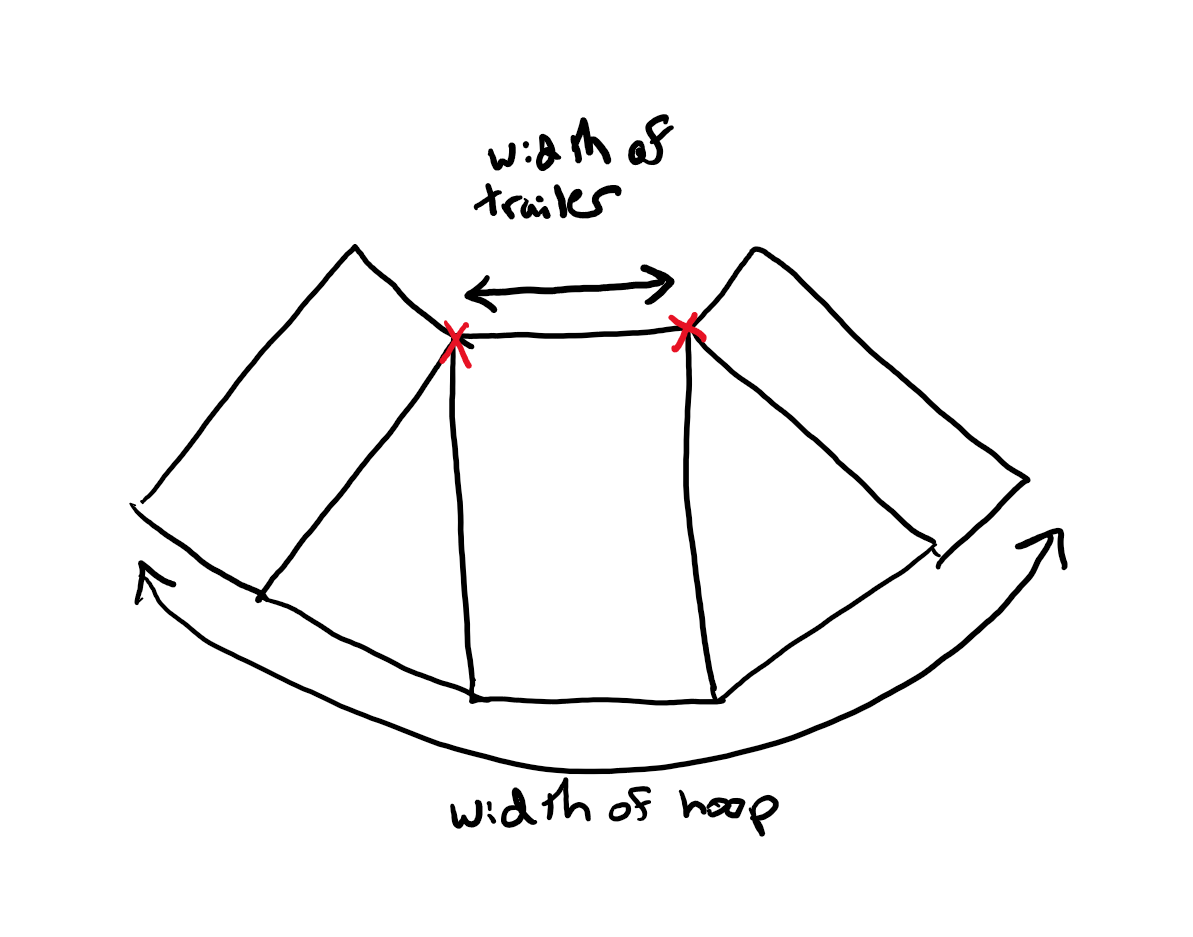 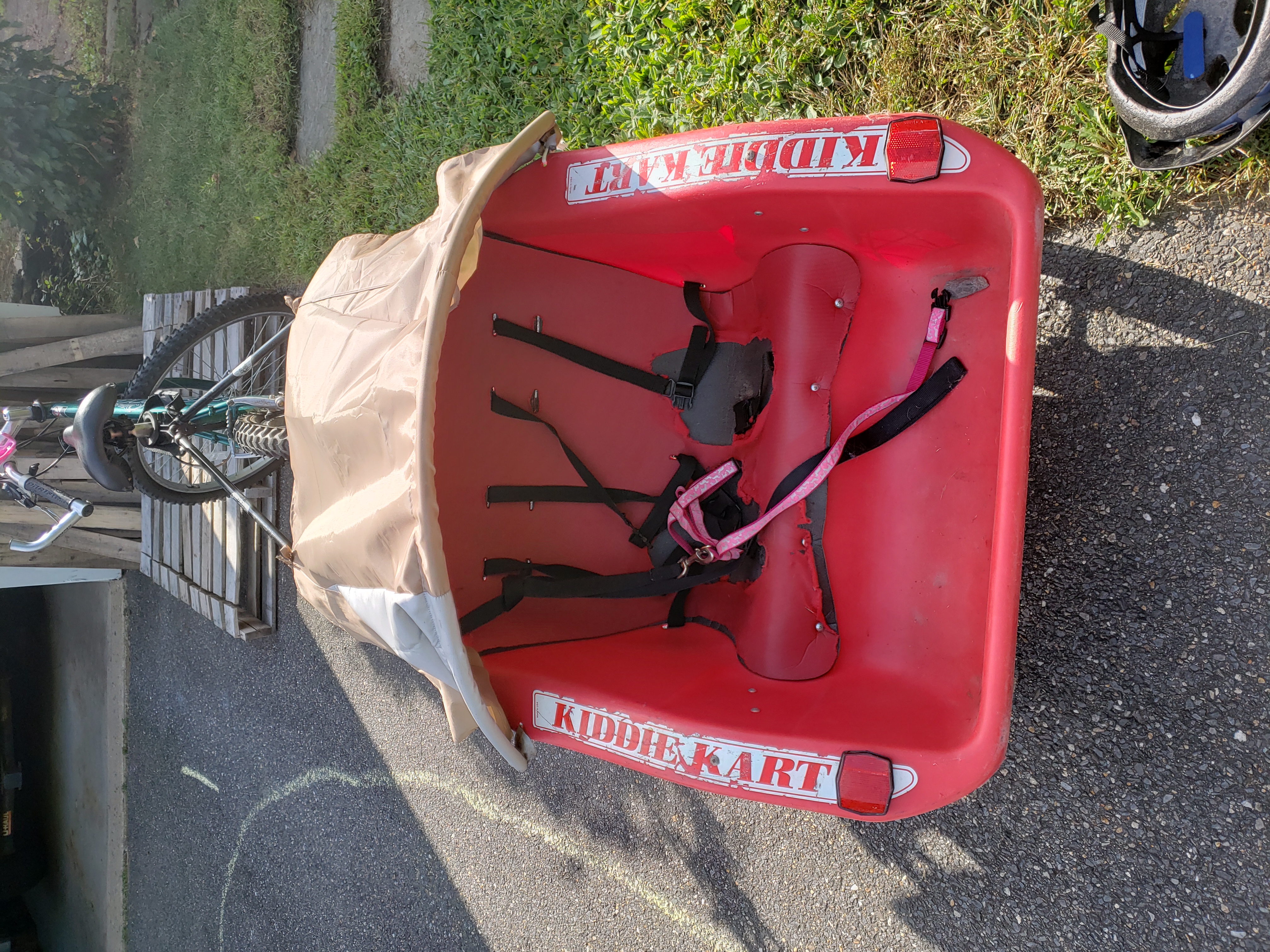 The seat was composed of a squishy mousepad-like material covered in a thin fabric layer.  The fabric layer was peeling, so I simply unscrewed the seat from the trailer and peeled the rest of the fabric layer off.  I used the rubber layer to draw a template on some grey upholstery material I had left over from my hatmaking days.  The material was perfect in that it would not fray after being cut.  I cut it out, clipped it to the rubber layer, and stitched around the perimeter of the two pieces.  To attach it to the bike trailer, I used a seam ripper to cut holes for the screws, and lines for the straps.  Then I reattached it using the original screws. 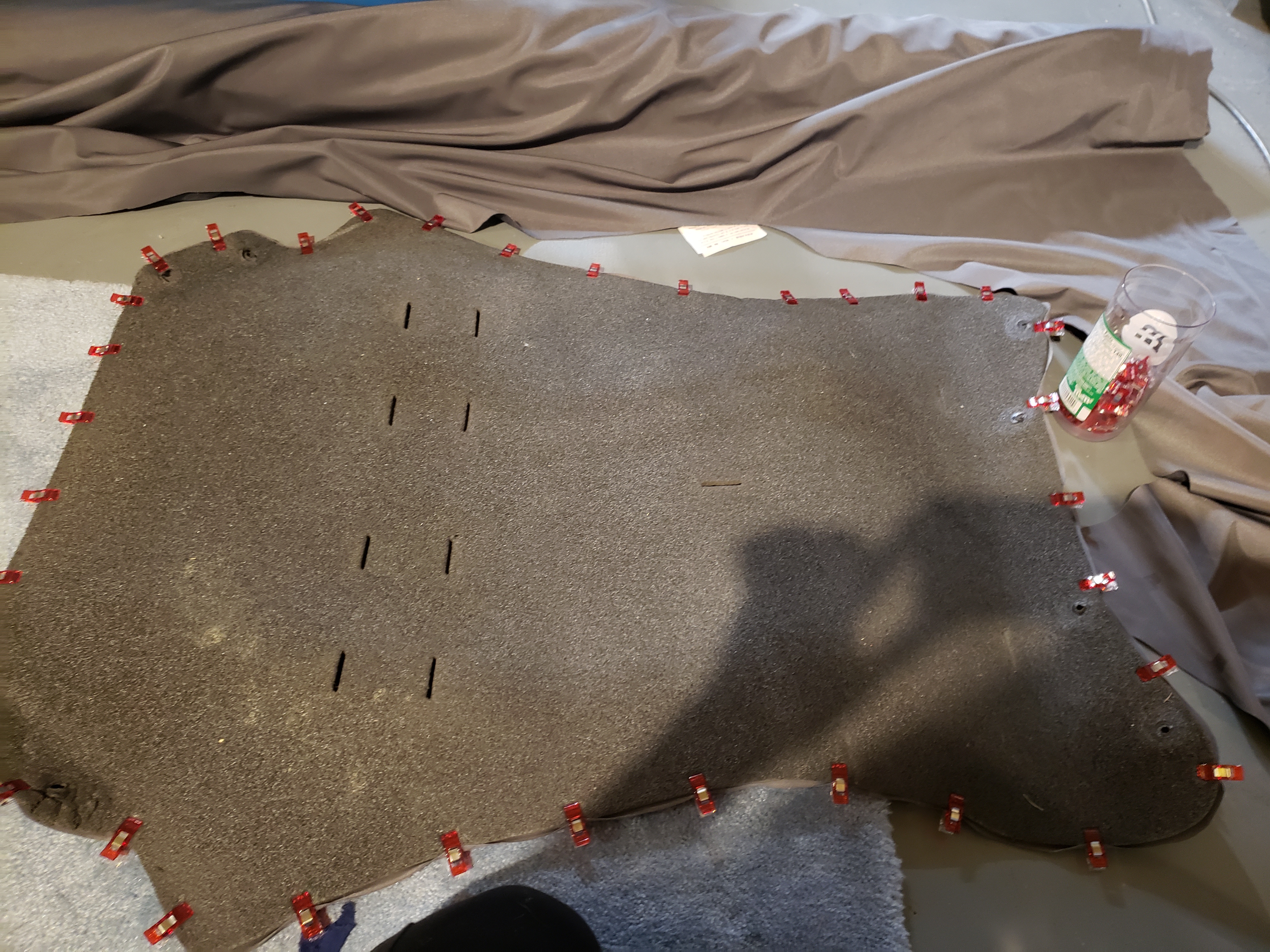 Pinning the rubber/foam backing to the new upholstery. 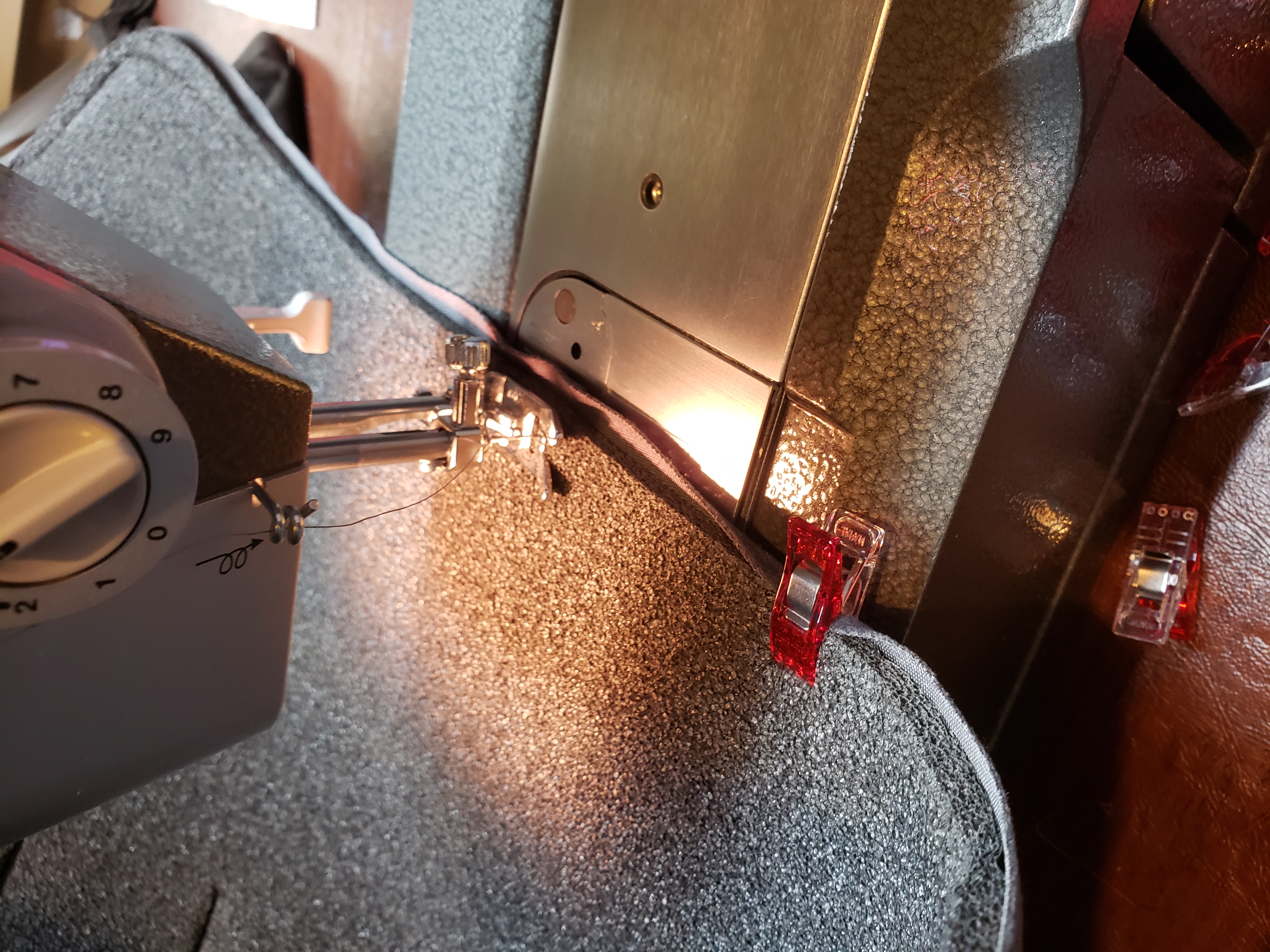 Stitching around the perimeter of the new upholstery 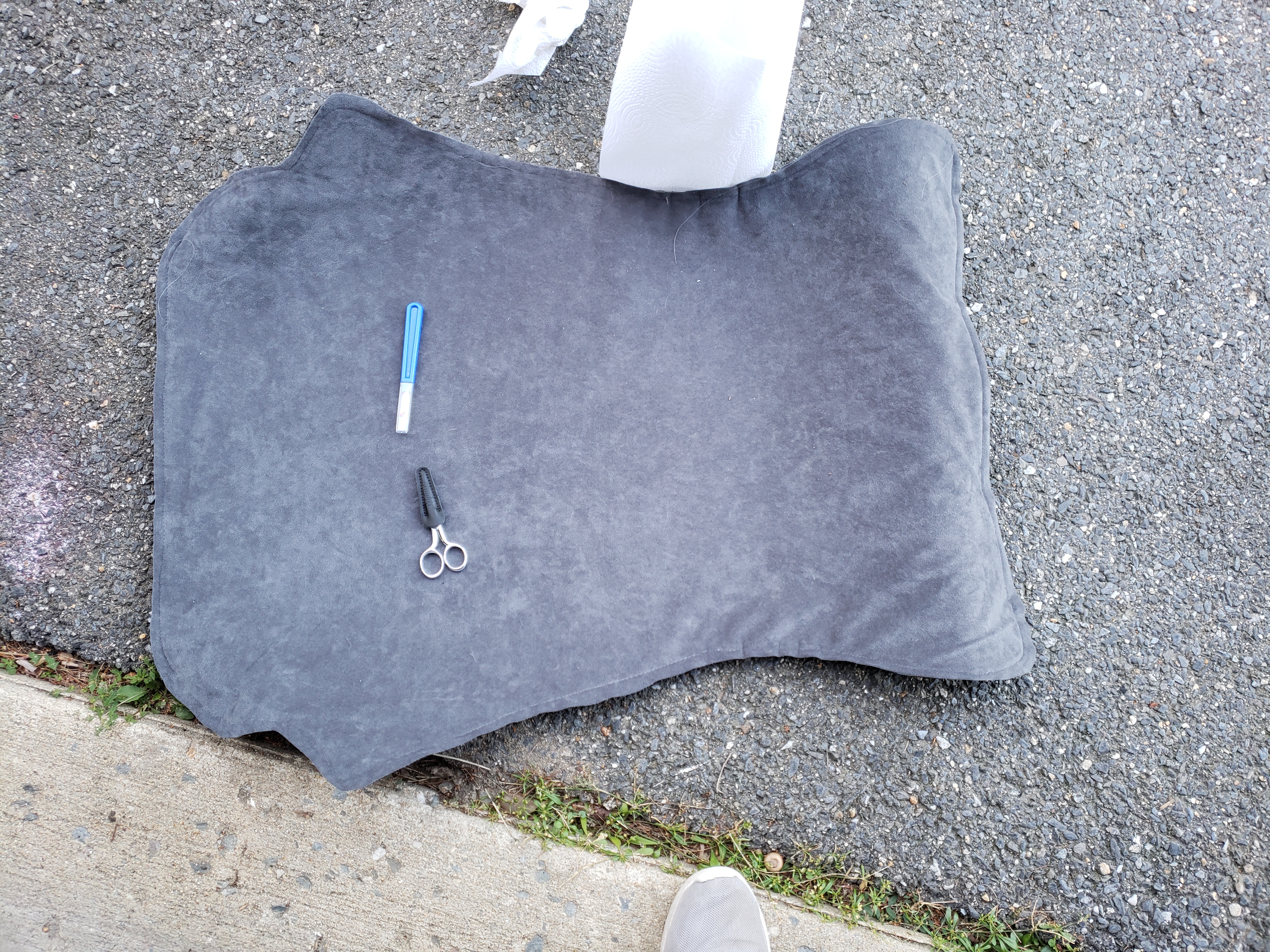 New upholstery! Ready to be stitch-ripped and attached. 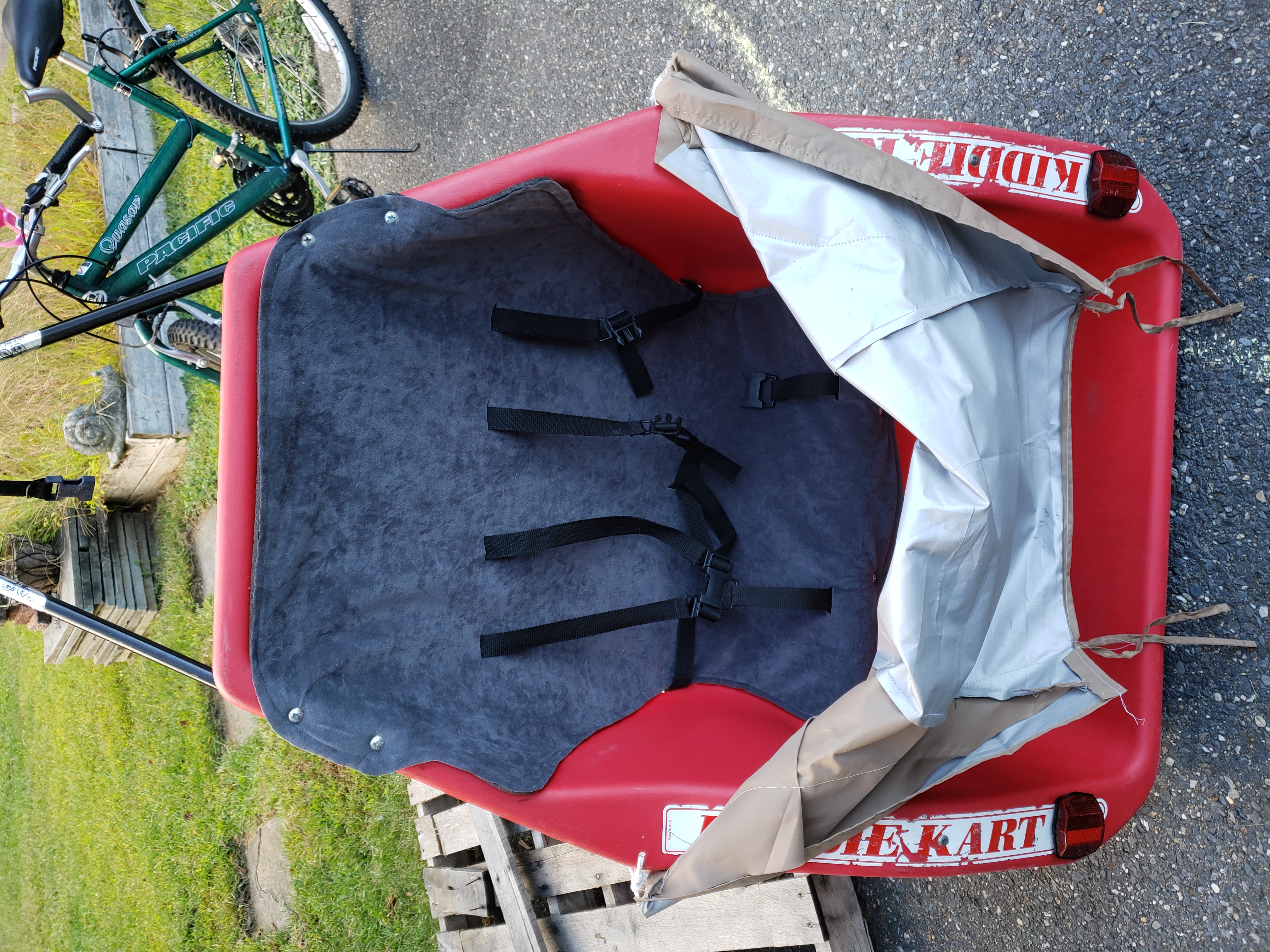 Check out that sweet new interior

Lastly I thought about painting the bike trailer but I’m trying to limit my exposure to paint right now, and I’m lazy.  Instead I decided to remove the ugly stickers on the side that were wearing off.  I just had to use a putty knife and some elbow grease.  Afterwards I slapped on some new bumper stickers that I would put on my car if I were a bumper sticker kind of person and called it good!  I’m pretty proud of how the whole thing came out! 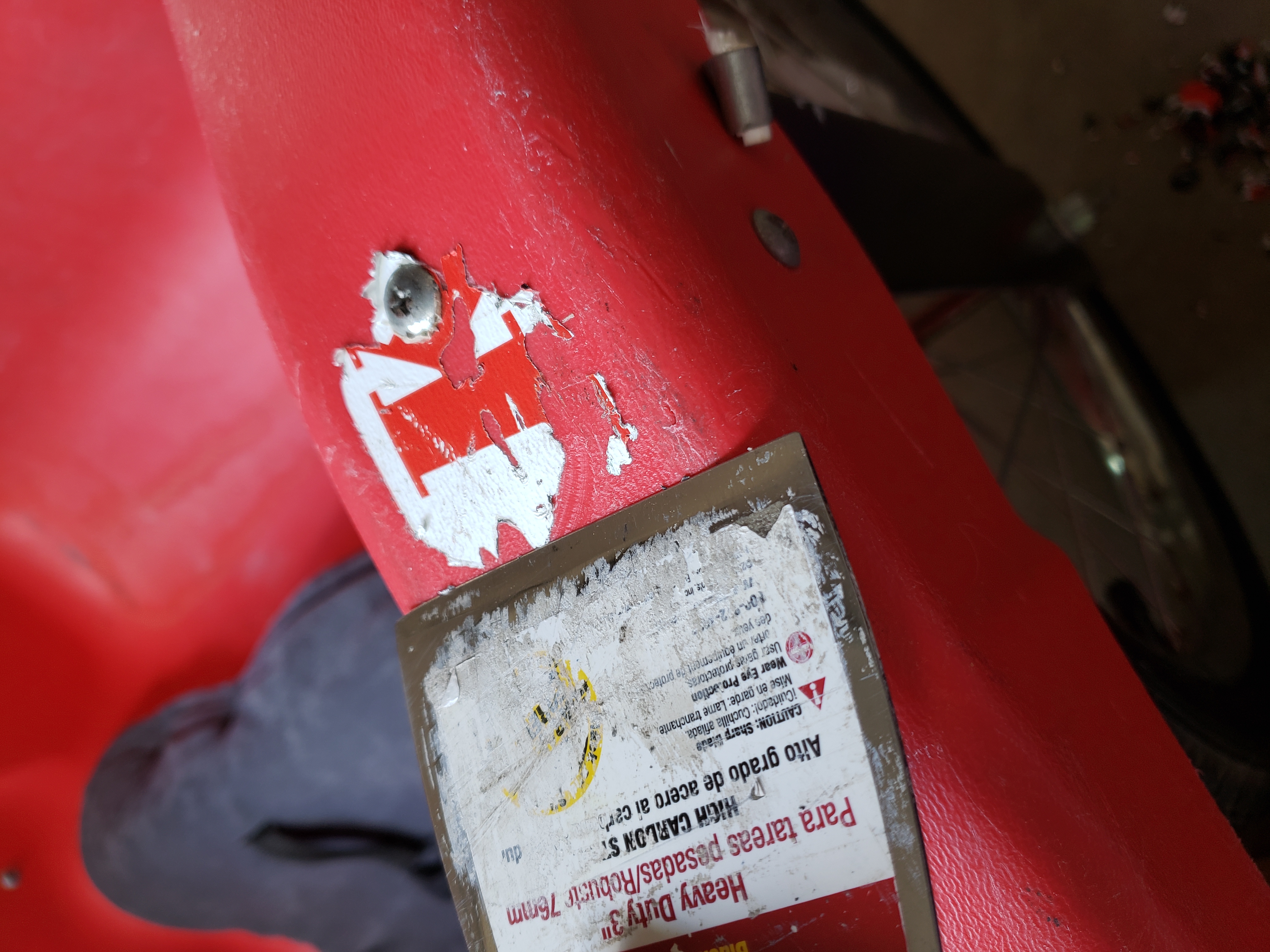 Scraping off the last remnants of the scratched up “Kiddie Kart” lettering. 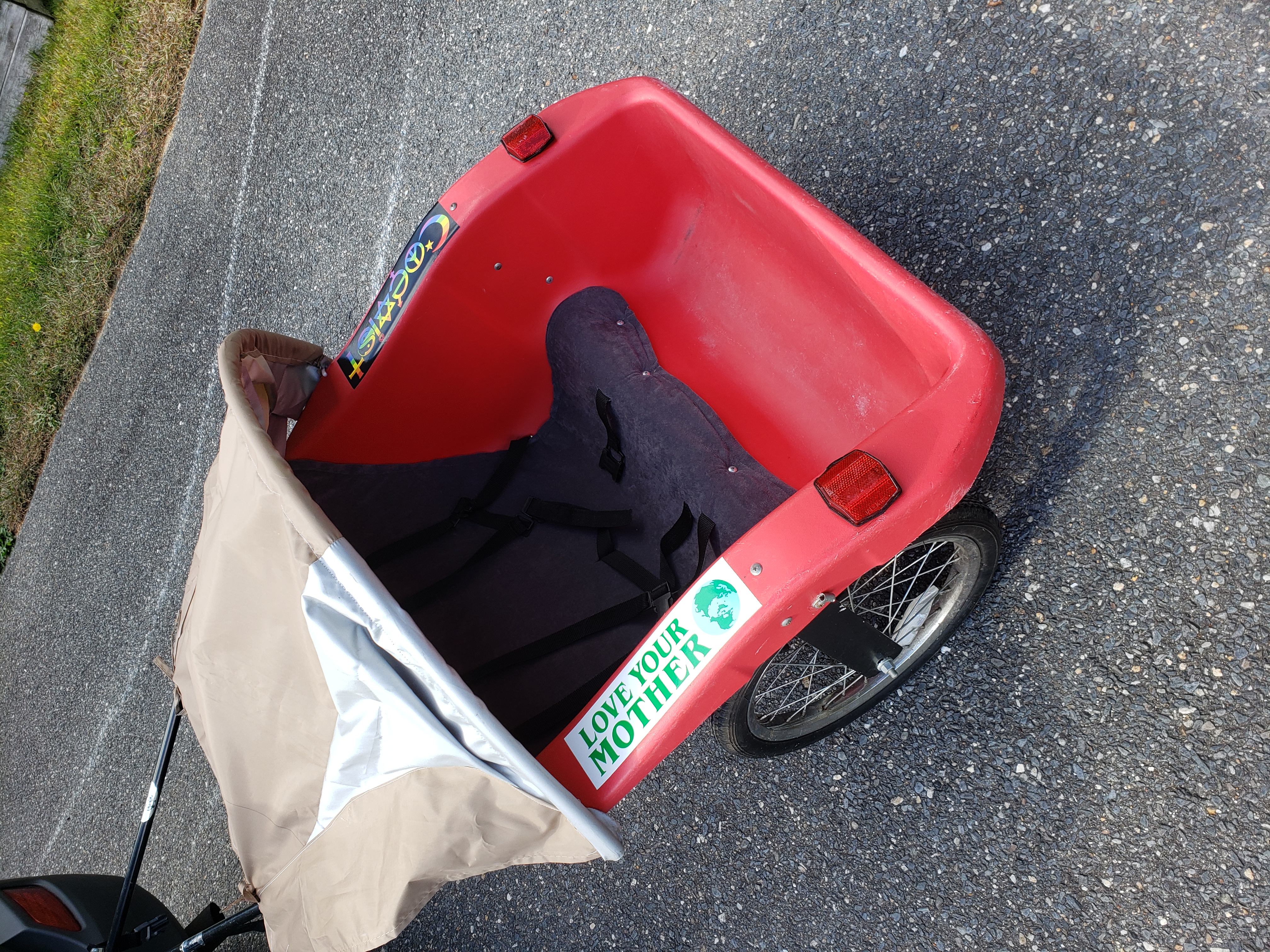 These stickers pretty much sum up my life views.  Will wanted to get one that said “my other car can do the Kessel run in less than 12 parsecs”.  Maybe I’ll find a spot. 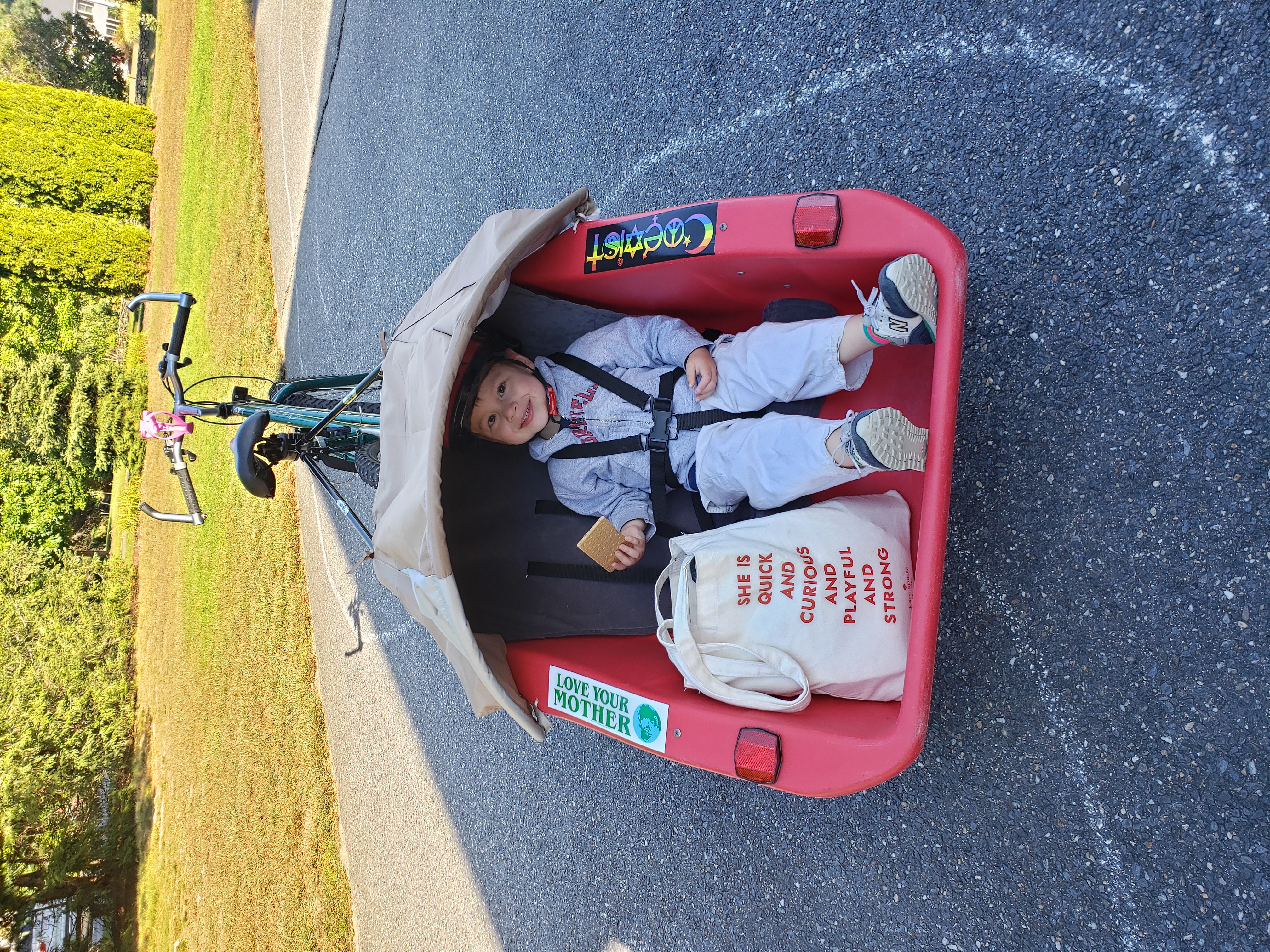 Julius in the new spruced up bike trailer!