We had fun celebrating our generic spring bunny themed holiday this past weekend.  Julius has started to remember holidays from years past, which is amazing.  Last year, you may or may not remember, I made Julius all the presents in his Easter basket because it was the start of the pandemic.  At that point in time virtually no stores had curbside pick up so it was very difficult to get things without getting them shipped to you, or risk going into a store.  I was also in my “no buying anything online to save the planet” phase, before I had to let that cave a few months later when we decided not to leave our house.  Julius remembered for some reason that the bunny brought him cookies, so that is what he expected from the Easter bunny again.  I decided this year to make him everything in his basket again and envisioned a puzzle, sugar egg, cookies and stuffed animal.

For the stuffed animal I envisioned using up some of the leftover foam from Julius’ climbing wall padding to make an animal that looked like one of those Squishmallows.  I thought a dragon would look pretty cute and would be fairly easy.  Skip ahead to the day before Easter.  Envision me telling Will at around 7:30pm that I should have just bought a stuffed animal because I hadn’t drafted or made anything.  Will suggested I just skip the stuffed animal.  But how could I skip the stuffed animal?  My son loves stuffed animals.  So I compromised and told him instead of making the dragon I would make a bunny which had a lot less pieces and should be easier.

Skip ahead an hour and I had a pattern drafted to test out.  I was copying the photo of this bunny who is pretty darn cute.  I created the embroidery pattern quickly and looked through my fabric stash for some fabric to use.  I really don’t have a lot of nice stuffed animal fabrics so I decided to use some dark grey fleece for the body, and after much deliberation decided to use some black faux fur for the inside of the ears and the belly.  I cut out my pattern and got to work.

The face came out darn cute so I thought I was in good shape.  That’s when it all went wrong.  It pretty quickly became clear that using the fleece with the faux fur was a bad idea.  The faux fur was stiff.  Not your usual soft stuffed animal faux fur but something more like a beard… At this point I was committed, so I kept at it and sewed the ears together and the body together.  The ears were a nightmare.  The thick faux fur, which was supposed to be the underside of the ear, pulled the fleece and made the ears contort in weird ways.  Okay, bad.  I thought maybe I’ll just go with it and see what it looks like.  At this point Will is downstairs with me, stuffing Easter eggs while I sewed.

It didn’t look too bad, so I decided to stuff it.  This is when I realized that the foam I had was way too stiff.  Obviously even the soft foam core for a crash pad is going to be way firmer than something inside a stuffed animal called a squishmallow…  I started kicking myself for not realizing this and debated using the stiff foam anyway.  Ultimately I decided that giving Julius a rock was probably worse than just stuffing it with ordinary polyester batting.  So I stuffed the whole thing with batting.  It looked ridiculous.  I wish I had taken a picture of it, but I was so annoyed with the whole thing by this point that there was no documentation going on.  Will looked up from his egg stuffing to see what all the cursing was about and burst out laughing.  His comment, “that bunny had the weirdest beard I’ve ever seen”.  Darn it, I’d been paying so much attention to the demented ears and lack of shape due to the foam form missing that I didn’t notice that the too-stiff fur on the chest of the bunny looked like the chest hair of some burly lumberjack. 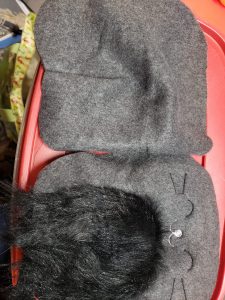 In retrospect this is when I should have noticed the bunny had chest hair.

Okay so now I’m assessing this lumpy, hairy, lumberjack bunny thing and all I can see is that the underside of the ears is also this too-stiff fur, and not only is it contorting the ears, but it reminds me of armpit hair.  GAH!  So now I have this burly testosterone heavy, hairy, lumpy bunny with the cutest darn face you’ve ever seen.  It is midnight and I am tired.  I spent several more iterations trying to get the ears to stick out less weirdly and the body to be less lumpy.  The ears won’t cooperate.  I decide in a moment of brilliance that I will just cut the ears down and make it into a cat.  Cats have furry tummies, maybe it won’t look so weird.

Except not really.  I didn’t do the right thing and remake some ear triangles out of leftover fabric because now it’s 12:30.  I just cut off the tips of the bunny ears and set them in as ears.  They don’t really look like cat ears.  So who the heck knows what animal this thing is.  I assess my creation.  Too late to make a new one, it is only mildly disturbing, into the Easter basket it goes. 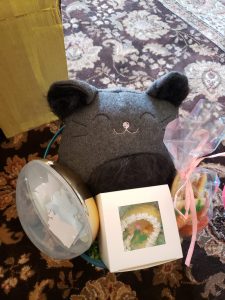 What was the Easter bunny thinking?

Easter morning Julius looks for his Easter basket.  He had just hunted for Easter eggs and gotten some really great stickers, yogurt raisins, fruit snacks and a few candies in his eggs. He is pretty excited.  He finds the Easter basket and he grabs the bunny/cat/? out of the basket, takes one look at it and literally throws it over his shoulder.  This is the boy who hugs every stuffed animal he has ever gotten.  Confirmation of this creature’s uncanniness.  Will asks Julius, “what was that animal the Easter bunny brought you?”  Julius responds, without even glancing over his shoulder, “some sort of bear”. 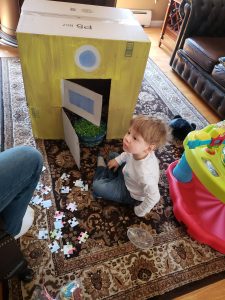 That is indeed the bunny/cat/bear behind him after he threw it.

Needless to say, I will not be posting the instructions for the Franken-bear (unless someone begs me).  But you can have my face embroidery file because that was darn cute.

Here’s something that is actually cute: 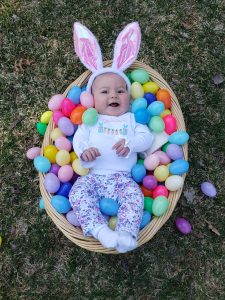 UPDATE!  Patricia loves the creature!  He has the perfect amount of chest hair that makes him easy for infant fingers to grab! 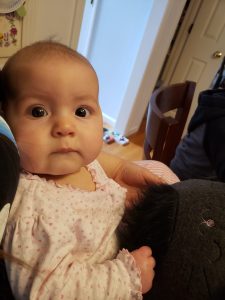 One Response to April Fools?