Wow it is late.  In the interest of me going to bed at a reasonable hour, I’ll tell you a Julius story, and then let you in on a secret.

I am still eating vegetarian, which means Julius and Will (and Patricia) eat vegetarian for dinner too.  After my year of vegetarianism I decided to have fish once a month or so.  Some internet research has lead me to believe that eating farmed bivalves is actually pretty good for the environment as far as eco impact goes.  Sorry I digress – today we were making coconut shrimp (I know these aren’t bivalves) and Julius really wanted to help me cook.  I suggested that he wash and dry the shrimp.  He got right to it and started telling a story about how the shrimp were getting washed and ready for bed.  I didn’t have the heart to tell him we were going to eat the shrimp and they were already dead, so I played along and asked if they were all shrimp brothers and sisters.  He responded instantly, “no they are all cute little baby shrimp”.  Will and I looked at each other horrified for a second.  If you want someone to go vegetarian just have Julius help you with meal prep.

Okay, now for the secret.  I love chia seeds.  It started by me trying to find a healthy snack to eat in the evenings. (Okay it probably really started with the chia pet I got when I was a kid…)  I was kind of over-doing it on Siggi’s yogurt, which actually has quite a bit of sugar in it.  I had a bunch of chia seeds leftover from who knows what in my closet.  I’ve tried chia seed pudding before and thought it was good, but remembered it contained a bunch of sugar. (The version I made for Ladies’ night had four times the amount of sugar as my current version!!)  Here’s the version I’ve settled on for my go-to late night snack.  Since it doesn’t have dairy it provides a significant amount of vegetarian iron, as well as protein! 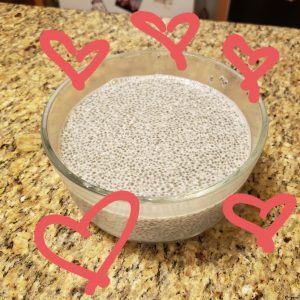 **coconut milk has almost no nutritional value but it is low in fat.  I find the shelf stable version tastes a teensy bit creamier.  Almond milk is higher in calories, but has a lot more nutrients.  I also think it tastes much creamier. 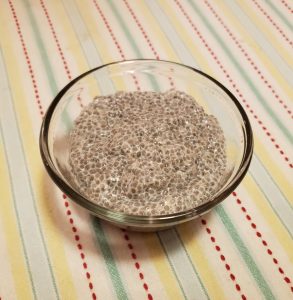