It is completely bizarre how Julius cannot identify colors.  Remember when I told you about the bug game where Julius was supposed to pick out the blue bug, and 90% of the time picked the white one instead – even after showing him just before the blue one?  Well that trend continues.  He has become quite enamored with my sad excuse for a garden, when I showed him how to pick tomatoes.  Every day he’s been helping me pick the ripe cherry tomatoes, and we take them inside to wash them, then Julius gets to eat them.  He loves tomatoes so he always wants to pick them.  The weird thing though is that he ALWAYS picks the green ones.  I have explained to him dozens of times that we eat the red ones, and yet he still picks the green ones.  Today there were more red than green tomatoes on the vines, and so I walked away for a bit to see what Dany was doing.  When I turned back around he’d picked 4 green tomatoes only.  I really have no idea what to do about that.

He told us this weekend that a horse is his favorite animal.  Who knew?!  He’s been hanging out with bunnies, doggies, and sheepies for his whole existence but horses are the ones he really wants to spend time with.  No wonder he loves the pony rides at David Farmland!  My parents neighbor has a horse (named Colton – no relation) so we walked over to chat with Colton.  Julius was too scared to pet him but he did smile a bunch at him and say “hi” in both English and horse.  Future equestrian?  I always wanted to learn to ride a horse (and swordfight) so that if I were thrown back in time I would be able to hold my own.  Very practical I know.

Speaking of practical, check out this extremely practical craft I made.  It’s supposed to look like  a pussy willow, but in multi colors, but it really doesn’t.  Will calls it the Dr. Seuss tree, and Julius calls it “mama tree” because I told him I made it and it is my silly tree.  Every morning of the first week it was in the upstairs landing he would go over to it and feel all the pom poms laughing at it.  (Because clearly it was silly.)  It was incredibly easy to make, so I’m almost embarrassed to post it, but hey, here it is. 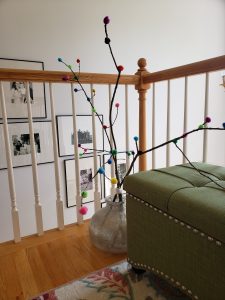