Every year for Valentine’s Day I cook something fun for dinner and try to make a craft or treat as a present for Will.  (I guess basically I boycott consumerism to the dismay of Hallmark.)  Last year I made him some Han Solo in Carbonite Reese’s.  Will usually just buys me fancy chocolates but this year Will tried to be extra nice and watched Julius for a whole night, which unfortunately for Will ended up being a bit of a disaster.  When he sticks with his usual gift, our favorite chocolates are the crazy concoctions they come up with at Hedonist Chocolates in Rochester.  We like them so much that we even made a pilgrimage to Hedonist last time we drove up to Niagara Falls for the Gathering.

My favorite of their chocolates are the lavender truffles which are white chocolate centers flavored with lavender and dipped into a heavenly compliment of dark chocolate and cocoa powder.  Since I wasn’t getting these chocolates this year I thought I’d create some truffles myself.  Not only that, but I’d do one better and host a truffle making Galentine’s Day party!

The party was a huge success (in my humble opinion) and one of my favorites so far.  I will definitely be doing it again!

The day before the party I made three types of ganache fillings; white chocolate lavender, dark chocolate (this recipe minus the liquor) and dark chocolate mint (same recipe but add 1/2 tsp peppermint extract in place of liquor); and stored them in the fridge.  I also prepared Shepherd’s Pie and a Garden Salad for dinner (both gluten free since we were expecting someone with a gluten allergy this time around).  Lastly I printed out a couple dozen of my Chinese take-out box truffle boxes on fancy paper.  (See the link here for full instructions.)

On the day of the party I removed the ganache fillings from the fridge several hours before and did some additional setup.  I laid out 6 cookie trays covered in waxed paper, dark and white chocolate chips for melting and en-robing, bowls and spoons for toppings and a station for do-it-yourself packaging and box setup.   I also, at the last minute, realized that I don’t own a normal double boiler and candy thermometer setup and spent the better part of an hour creating what I thought was a very clever contraption to melt and monitor chocolate.  Will told me the device should be featured on redneck contraptions on reddit which was both flattering and insulting.  Finally I put the Shepherd’s Pie in the oven 30 minutes before guests were supposed to arrive. 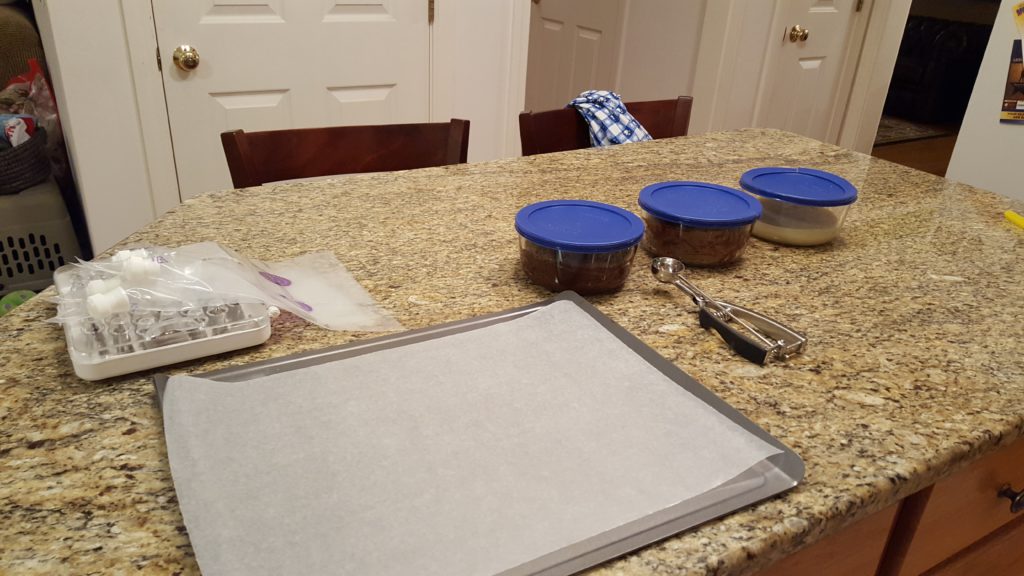 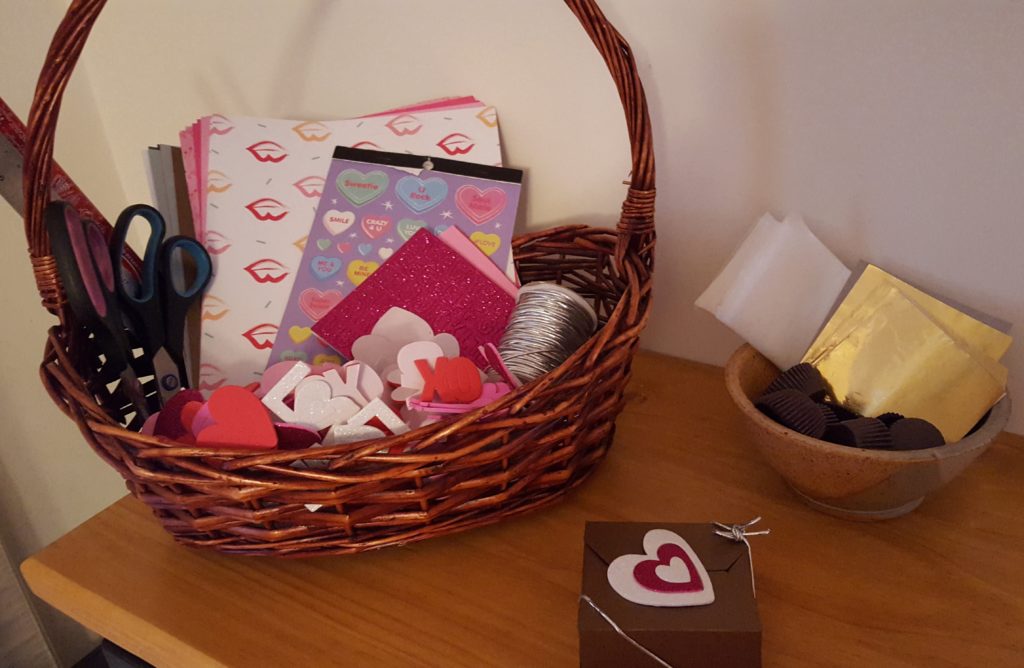 My box making and wrapping setup with heavyweight paper box templates, scissors, rulers and decorations in the basket. In the bowl I have truffle wrappers, foil and waxed paper. 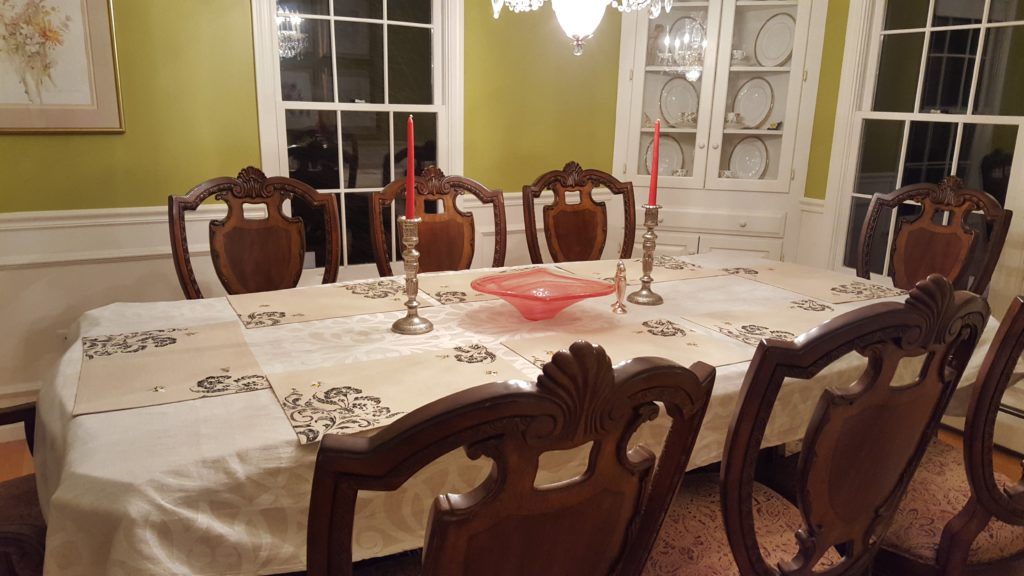 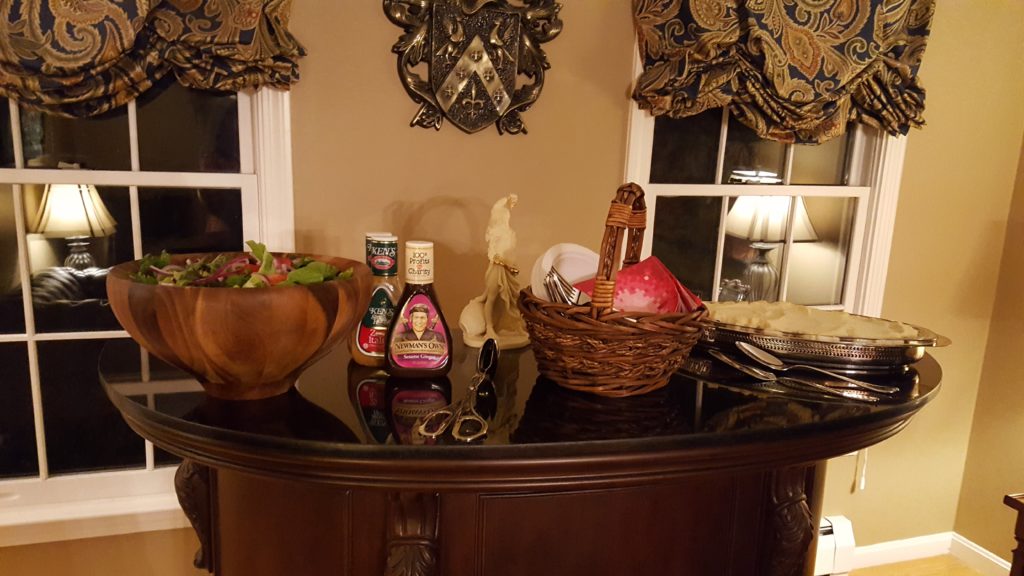 Since the kitchen was prepared for truffle making, I set up the dinner buffet on the bar. Dinner was simple: salad and shepherd’s pie. 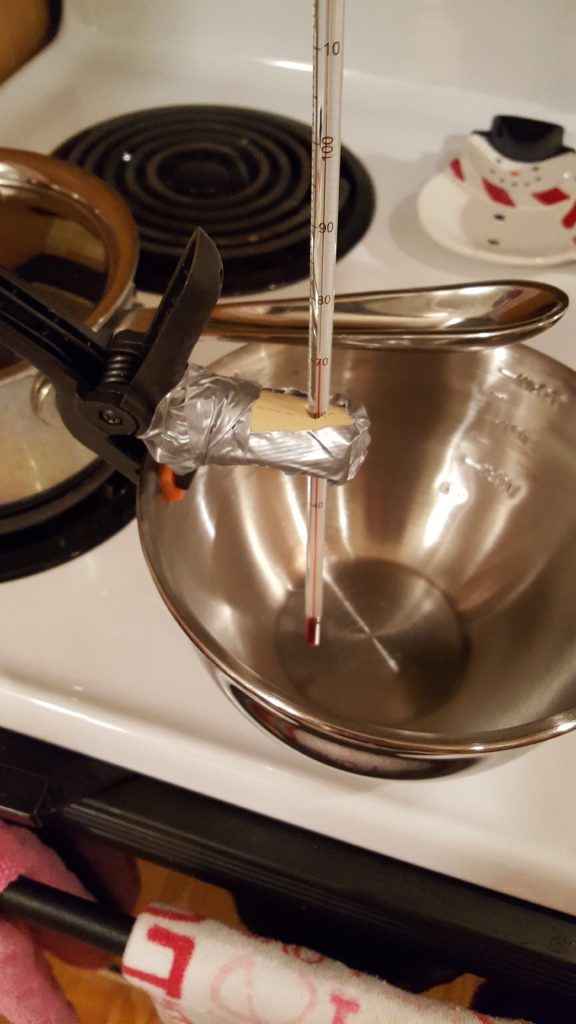 My redneck double boiler apparatus – I drilled a hole in a cork to insert the candy thermometer so it wouldn’t touch the side of my curved mixing bowl.

We ate dinner as soon as the guests arrived and then got down to business.  Two guests had bought truffle fillings, and others brought items to decorate the truffles with including sanding sugar, nonpareils, coffee beans and nuts.

First we put on aprons, rolled all the fillings into tiny balls, placed them on the waxed paper lined trays and then chilled them in the fridge and outside on the porch (it was 30 degrees out).  Next we tempered chocolate for dipping using my redneck invention.  Using plastic forks with the two center tines removed we dipped the chilled filling balls in the tempered chocolate and set them back on the waxed paper lined trays.  Before the chocolate set someone sprinkled on decorations.  With so many hands (7 people!) the process went fairly quickly and we made a couple hundred truffles in less than 3 hours.  Whenever anyone needed a break they went over to the wrapping station and made themselves a box.  I think the party was a huge success and I can’t wait to do it again!  I can even imagine adapting this for a kid’s birthday party (assuming a parent does the chocolate melting). Frankly the only problem with the whole party was that the next day Will and I ate 20 truffles between us and were nearly ill from chocolate overload. 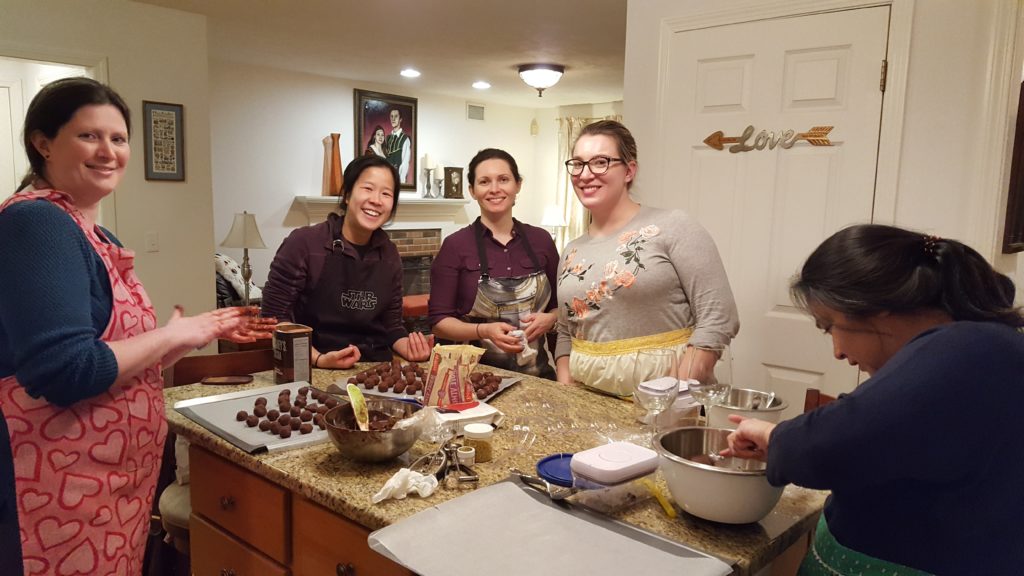 Here is the small army of ladies rolling truffles. 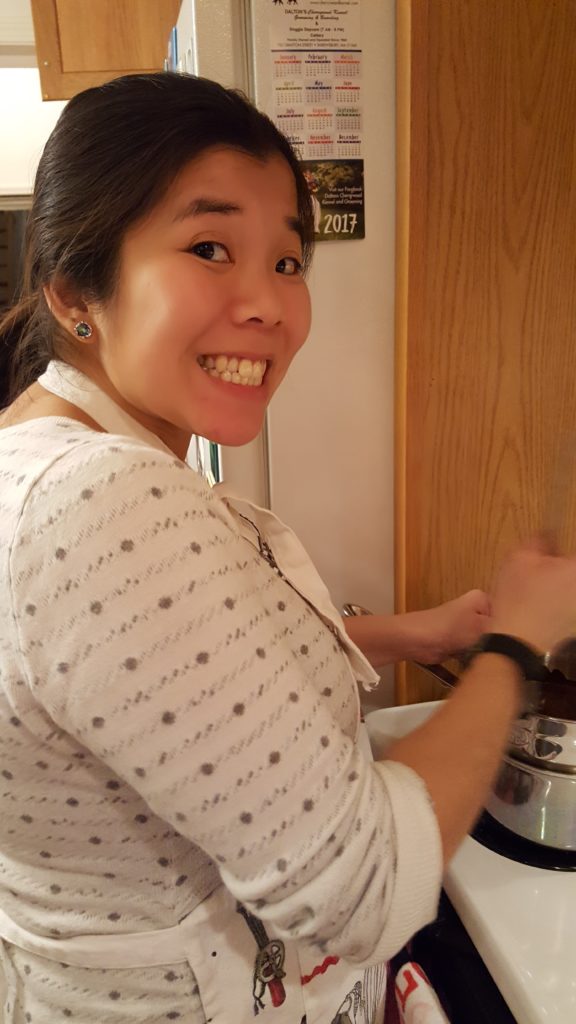 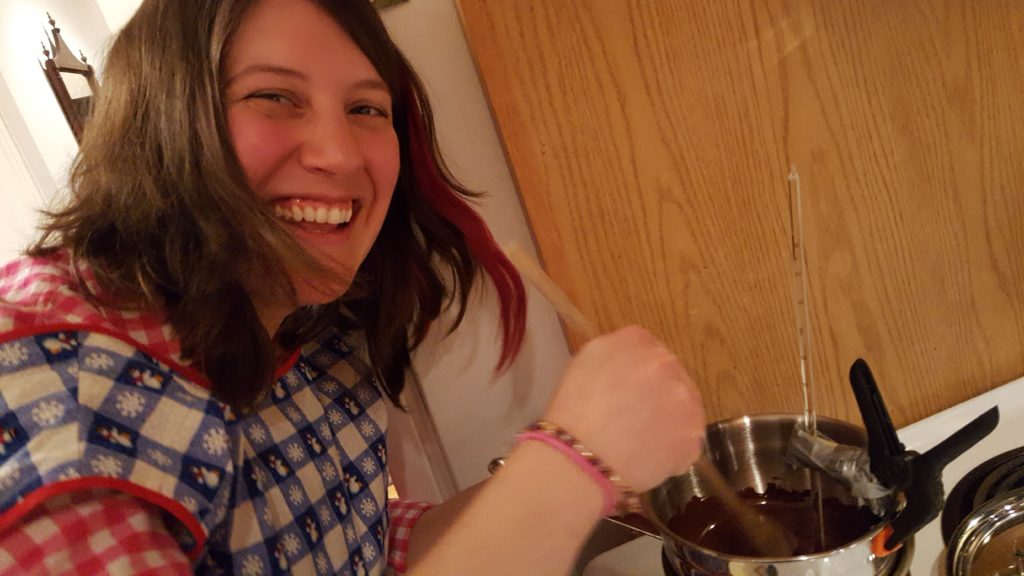 Here I am tempering chocolate.  I look a wee bit crazy. 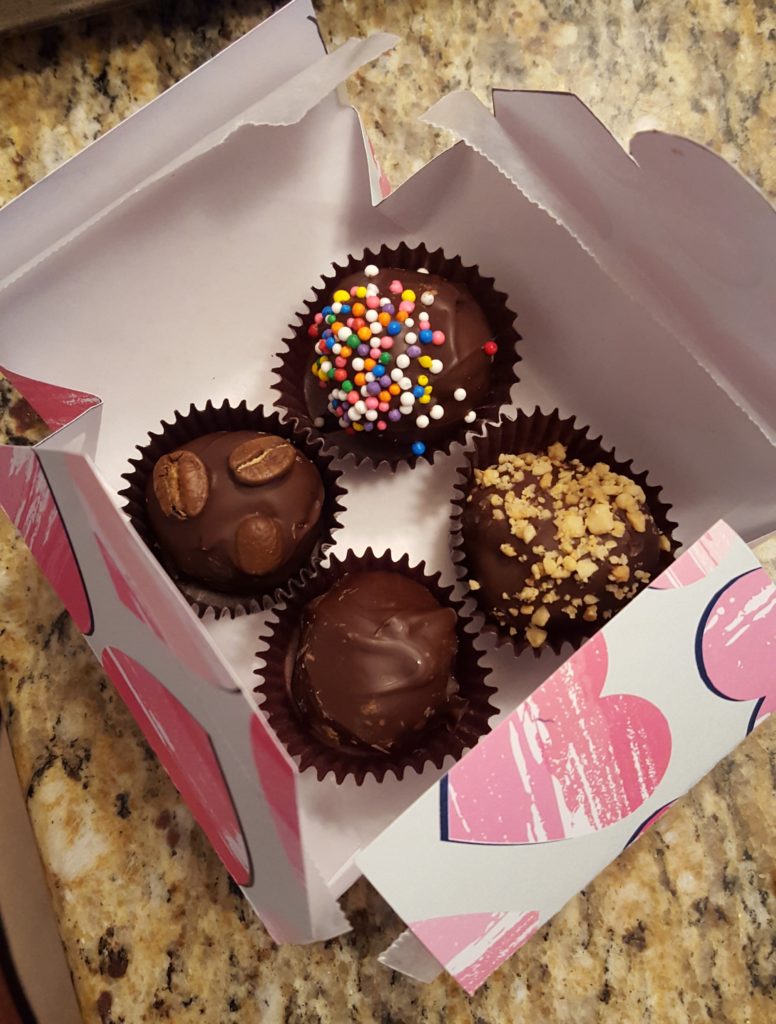 A box of truffles. 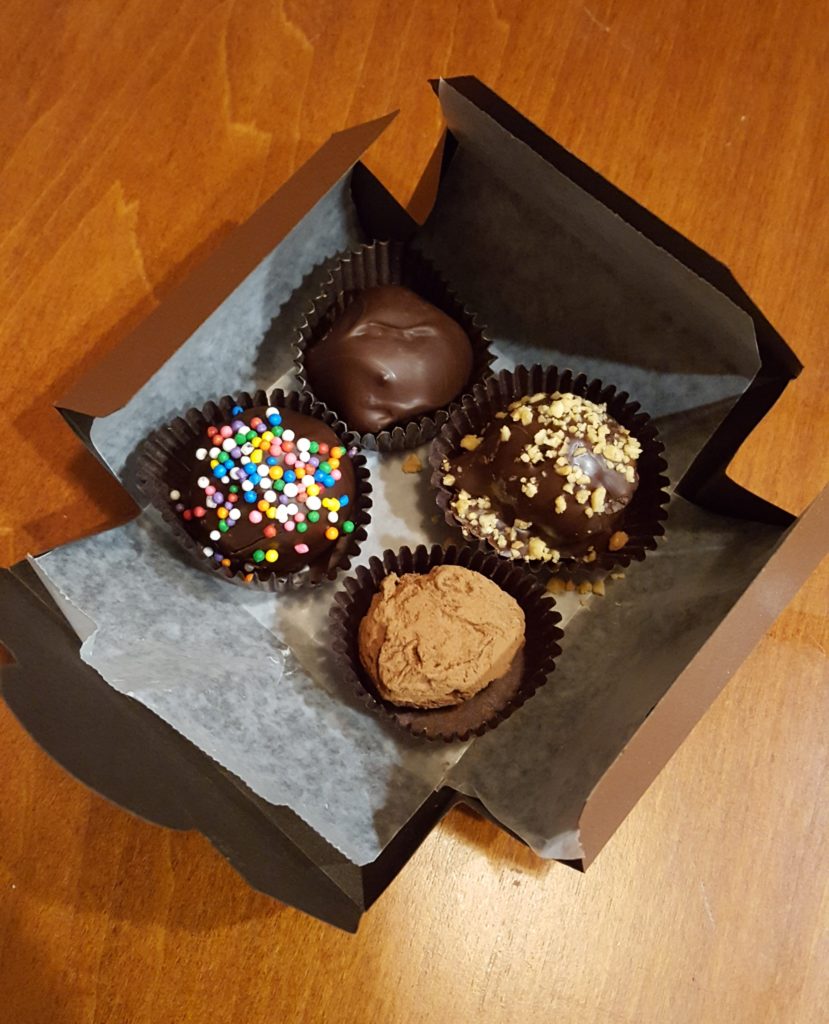 Look at how shiny that chocolate is! It was worth tempering it! 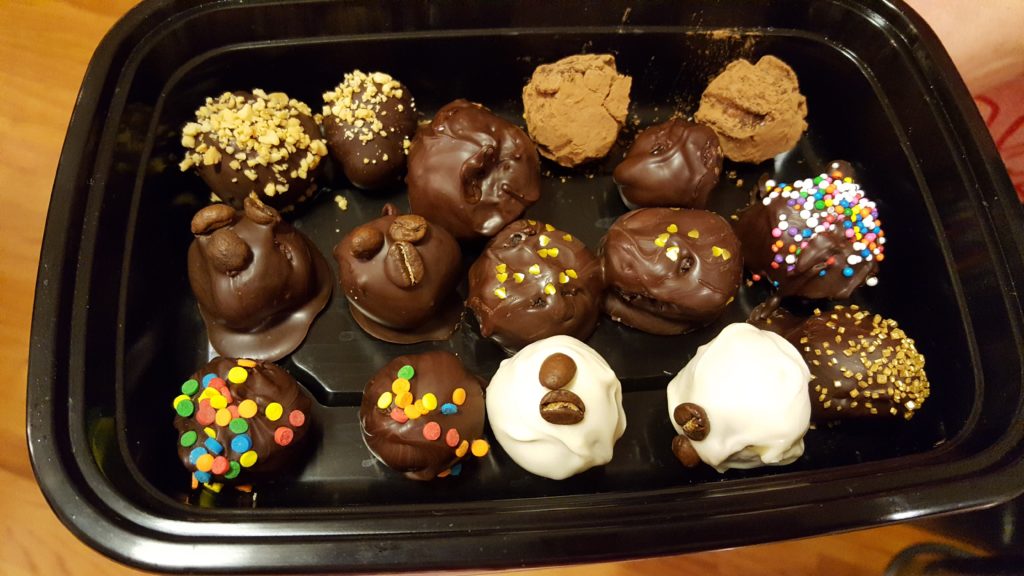 Being a hippie I wash and save plastic take out containers. I gave everyone a container to fill with chocolates. 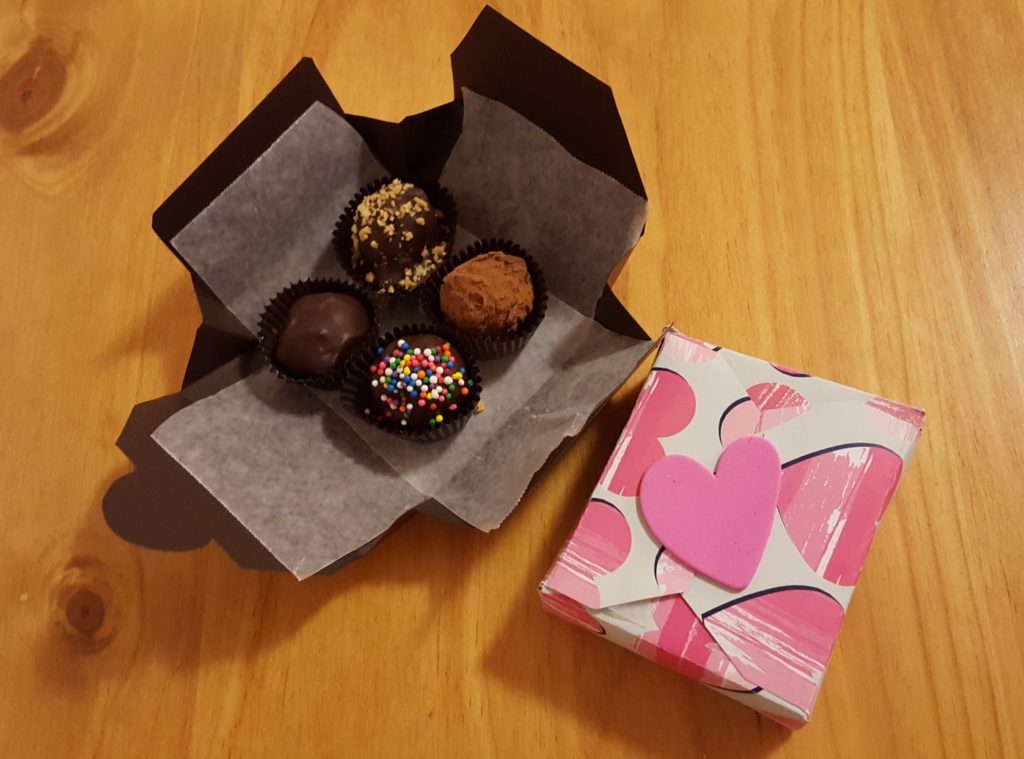 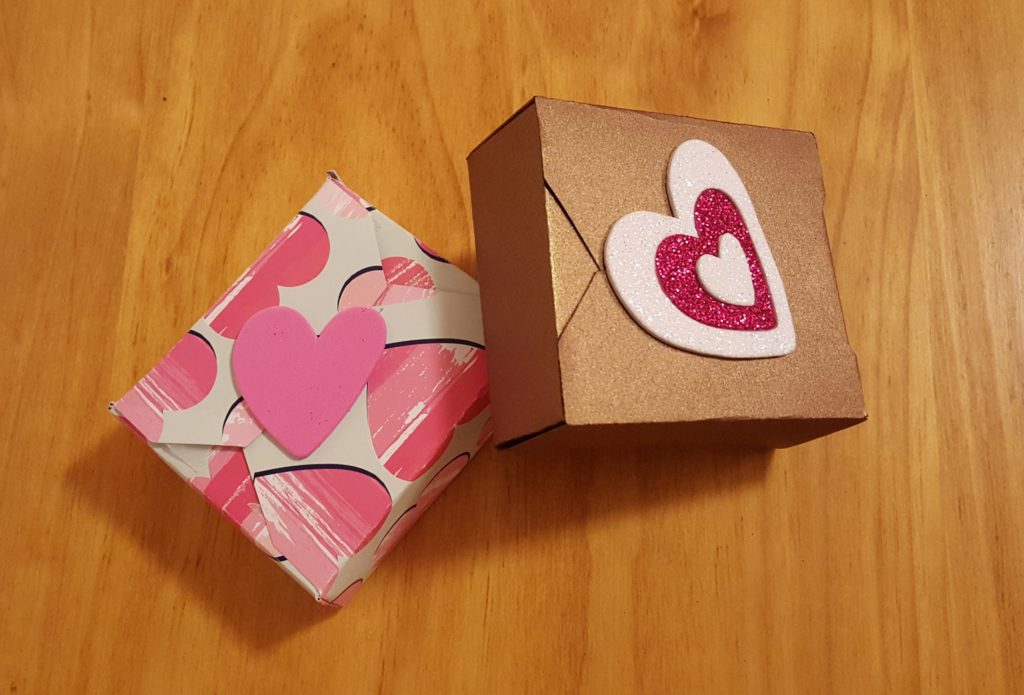 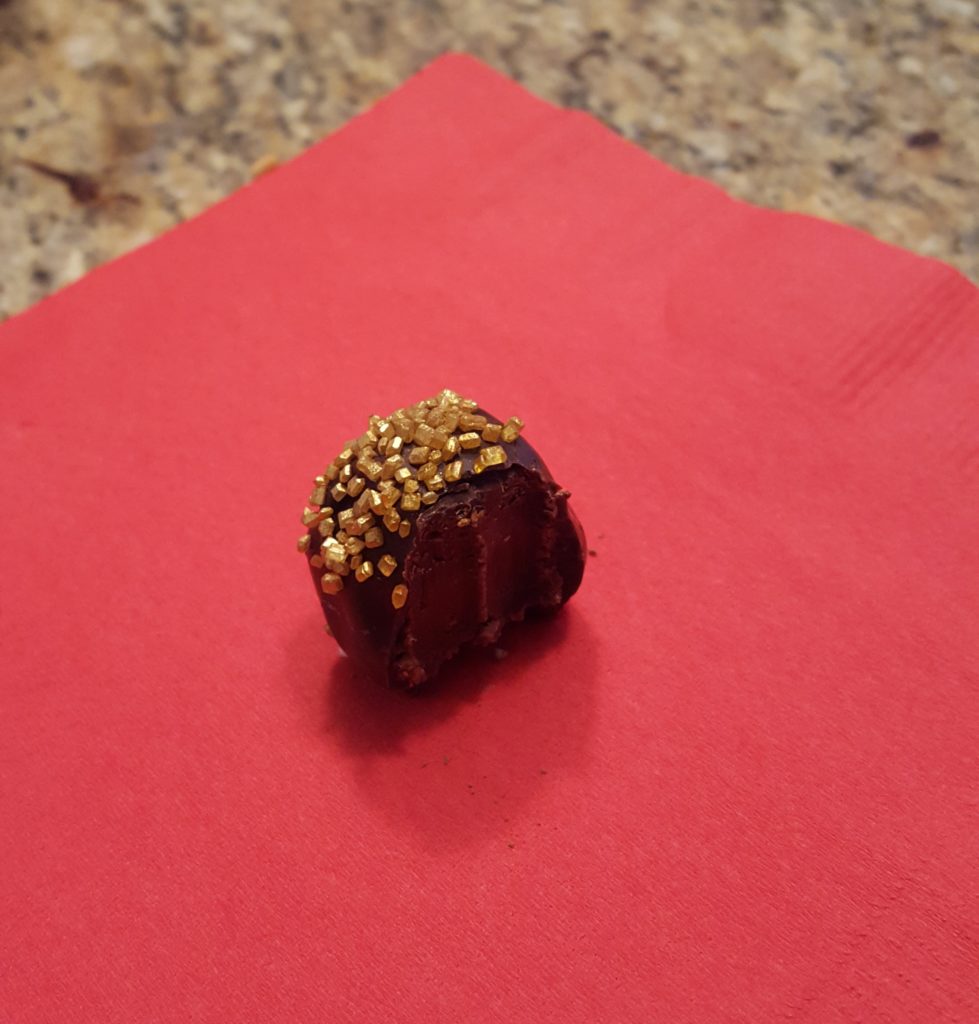 Here’s the inside view of a mint truffle!  Nom!