Today Julius collected a dozen acorns on our walk with Dany.  He was getting extremely frustrated because every time he’d drop one, Dany would crunch on it and try to eat it.  When we got home he didn’t want to eat dinner and just wanted to play with his acorns.  He really just wanted to hold all his acorns at the same time, but his little hands did not allow that, and thus he was unable to do anything but drop and pick up acorns for a solid 15 minutes.  I finally convinced him to put them into a bowl, which he carried around.  Eventually I coaxed him to the sink to wash his hands by asking if he wanted to wash his acorns.  He did, and I snuck some hand washing in.

Eventually I got Julius to sit in his high chair, but only if the bowl of water and acorns sat on his tray.  I put his chicken nuggets on his tray as well as some corn, and he grabbed a chicken nugget and popped it in his mouth.  After he’d finished chewing that, I asked him to try some corn and he grabbed an acorn out of the bowl and went to pop that into his mouth.  I shouted in fright that they were not edible and he cried for a while until I convinced him that they were yucky and not safe to eat.  I sent him some serious mixed signals by letting Dany eat acorns, having him wash the acorns in a bowl just like we do the cherry tomatoes from our garden and “serving” them next to corn.  I really can’t blame him.

Julius has toned down the hitting the last couple weeks.  The other day he accidentally whacked me in the nose while he was busy doing something, and he leaned over and kissed my nose.  Now he gives me a kiss whenever he accidentally hits me.  I consider this a big improvement over the hitting.

Speaking of improvements, I’ve been contemplating a kitchen renovation of some kind.  I haven’t decided on anything yet, so to contain my urge to renovate I’ve been doing lots of very small crafts.  One such craft was a bunch of dry erase boards for my fridge.  A month or two ago I made some cute dry erase boards from frames from the thrift store.  I very cleverly replaced the glass with some acrylic I had downstairs, so when Julius inevitably drops them they don’t shatter.  The problem I realized later is that dry erase markers on acrylic do not erase.  Instead I purchased Lexan to replace the acrylic and it has been perfect!  Just like glass.  It made my project way more expensive though… 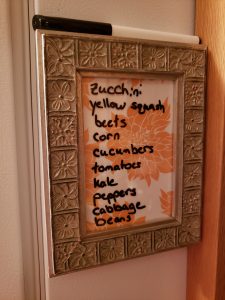 2 Responses to Good Frame of Mind