We stayed up way too late watching Captain Marvel tonight since we made the mistake of starting it last night and needing to finish it in 48 hours before it expired.  I liked it!  Especially all the female rock songs.  It made me realize I didn’t have any old school No Doubt on my Spotify playlist!

Speaking of my Spotify playlist – I abandoned the customized playlist of the week about 17 months ago, when we started playing Raffi songs for Julius.  When my recommendations turned into folk rock versions of kids songs I almost went insane and decided to just never look at it again.  Since then I’ve embraced the kids song channels, especially since Julius always likes to sing along to them in the car.  Frequently I’ll find myself leaving the daycare on my way to work singing “the Wheels on the Bus” at full volume before realizing Julius is no longer in the back seat.  And sometimes (when I’ve really gone crazy) I’ll even finish the song before switching to adult music.

As I probably mentioned months ago, Will and I have been trying to eat vegetarian a bunch of times during the week.  I’ve also been eating vegetarian for lunch.  Despite all these meals I really wanted to come up with a “all ingredients on hand, throw it in a pot” meal.  For instance, American chop suey or hamburger stroganoff.  I (used to) always have ground beef in the freezer, which I could just take out and cook from frozen, add a sauce and be done with it.  I tried experimenting doing the same with beyond beef but, because of the fake smoke flavor they add, it was truly horrible.  Vegetarian meals (that I enjoy) are not generally the meat and potatoes type meal, and I dislike the typical “meat substitutes” like tempeh or tofu, so I needed to approach the problem differently.

One day I tried a meal from Woodland Foods that was exactly what I was looking for: delicious, shelf stable, and it could be produced in large quantities to keep on hand in my pantry.  The version below is what I came up with after several attempts, and was approved by both Will, myself and my dad (who had a second helping and declared he “liked the texture”).  It has a hint of heat and it really does have a nice texture.  It’s been my go-to for a few weeks now, but I might experiment with another version sometime soon. 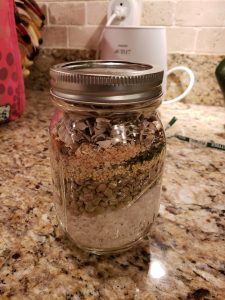 Combine all ingredients in an airtight sealed jar until ready to use.  When ready to use, pour into a pot with 2.5 cups water, stir and bring to a boil.  Cover and simmer on low for 25 minutes. 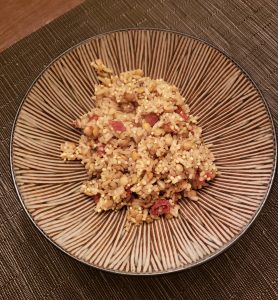 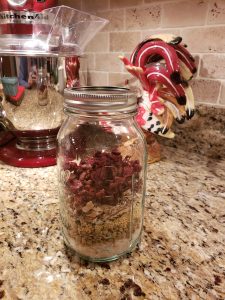