As we already knew, Julius is a little ham.  We had our babysitter over last night so Will and I could have a date night.  Before she left she told us how he was being such a little ham, making her laugh all night.  She said he’s developed such a cute little personality now.

There is one little girl at daycare who is about Julius’ age but until recently has been cared for at home.  For the last few weeks the poor thing cried whenever a parent left after dropping off their child.  Last week it looked like she turned a corner.  She seemed much more cheerful and even said ‘bye’ to me all week without crying.   Then Friday, when I was putting Julius’ clothes in his bin, I heard the unmistakable tears start again.  Julius walked over to me from the next room, looked me in the eye and said “Hailey” and then walked away.  He put the emphasis on her name as if to say “yep that’s Hailey, what are we going to do with her”.  I almost died laughing.

I am completely inundated with projects.  Between Halloween and Julius’ birthday I have once again over committed.  I probably mentioned that I’ve been working on a play kitchen as Julius’ birthday gift, but in case I haven’t, I’m making a play kitchen from an old cast off child’s dresser I picked up off the curb.  Actually, to be precise, I finished the play kitchen last Monday!  I don’t want to toot my own horn, but I think it came out pretty great.  The problem is, since it took me a very long time to finish, it is also going to take me a very long time to write it up.  So don’t expect a post on that until I’ve got some down time.  (Read: after Julius’ birthday.)

Since I still have to finish my own costume, I’m going to leave you with a fun little project I did with Julius last week while we were home potty training.  My work is pretty awesome, and composts and recycles.  99% of the items from the cafe are compostable, which is awesome.  The not-so-awesome part is that my site is full of people who are not used to composting.  This means my site is now also full of fruit flies.  When they first started composting (about 7 years ago, wow) my co-worker would leave his food scraps on his desk until the end of the day as a form of protest.  This earned him the office name plate “Lord of the Fruit Flies”.

While I am all about composting and definitely not protesting it, I am also lazy.  I don’t feel like making a trip to the compost bins every time I eat something (which for me is like once an hour).  Sometimes I’ve even forgotten to empty my bin into the compost bins until the next Morning!  To avoid the scorn of my co-workers and a new office name plate, I’ve been using an old yogurt bin as my compost bucket.  It works GREAT.  It doesn’t smell at all, and I’ve had no fruit flies in my cube at all since I started using it a month ago.  One time I even forgot to empty the compost after a whole weekend and no one was the wiser!  I think it would work great as a home compost bin for food scraps too!  I know most compost bins (like mine) actually are not completely sealed to allow some air flow and prevent anaerobic bacteria from building up, but if you take this out every couple days or keep it in your fridge I don’t see how that could be a problem. 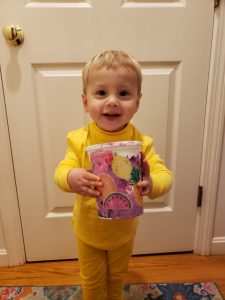 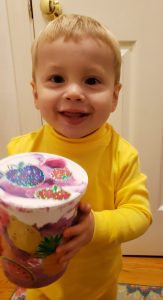 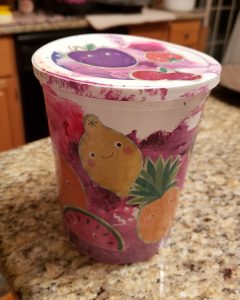 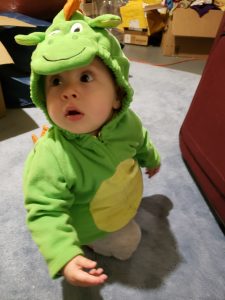 This was a year ago today. 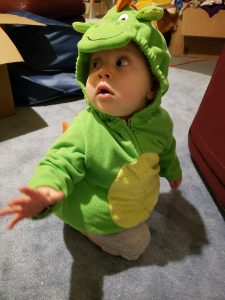 These photos have absolutely nothing to do with anything but aren’t they cute?!