Julius learned how to hop yesterday!  He has been working SO HARD at trying to hop.  It really cracks me up.  Usually he just lifts his arms up in the air pretending to jump since he can’t quite get off the ground.  But Saturday we spent a lot of time in a bounce house.  I think that was the turning point because on Sunday he wanted to be picked up and he hopped!  Actually that was the second time.  The first time I have no idea why he was hopping, probably just being silly.  Today I asked him to ‘show me his hops’ and he got down proudly off his chair and hopped around a bunch.  I held his hands to help him with his balance while he hopped and after a few more hops he moved over and hugged my legs in what seemed like a thank you.  It was so sweet. 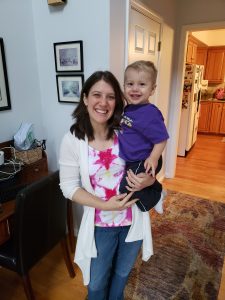 Julius my hopping man and mama in her new tie dye.

You know what else was pretty sweet?  The murder mystery party we just hosted!  We have been buying these ridiculous boxed murder mysteries games every time we see them at thrift stores.  Which is fairly often.  The most recent one we hosted was 1960’s themed.  They are all politically incorrect and quite silly, but they are always fun.  Even folks who aren’t theatrical can play along because they give you a set of “clues” you have to reveal about yourself during the round that are written almost like a script.  At least one person did figure out the murderer so it wasn’t a completely ridiculous plot line.  They also give you some great instructions for serving a meal while playing the game with menu suggestions.  I don’t always follow the menu, but since this one was hippie themed it was completely vegetarian, so I gave it a go.  My idea (even before opening the box) was to have special brownies for dessert and they had a silly twist on that.

I spread incense burners all over the house and intended to host the appetizer round on the back porch where I had set out cushions on the ground.  Unfortunately it was very cold that evening, so we had to move the party indoors instead.  For dinner I set the table with my favorite paisley tablecloth and some fabulous dishes from the 60’s that I found ages ago at the thrift store.  Funny story – I went to show my mom the great dishes I had found and she told me they were the exact same pattern my grandma used as everyday ware when my mom was a kid.  She even found one that was left in the attic to go with my collection. 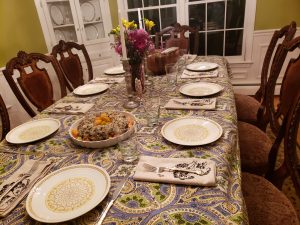 Check out those awesome plates from the actual 1960s!

I love murder mysteries because they mean costumes!  I tie dyed my costume (because another excuse to dye something)!  Half way through the dyeing process I thought it was going to be ugly, but I’m really happy with how it turned out.  I just love how unique tie dye turns out.  E very time is another surprise.  Since I couldn’t help myself, I also tie dyed another shirt at the same time (see above), and I love that one even more!  I’ve worn both to work and around town and I’ve gotten lots of compliments.  The crown was made using a free Cricut pattern – the flowers are all cardstock.  The beads I actually bought from Michaels – they are prestrung and were only $3 for an insanely long string.  Ideally you probably want to restring them into your own love beads, but I didn’t have the time yet. 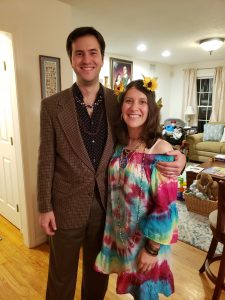 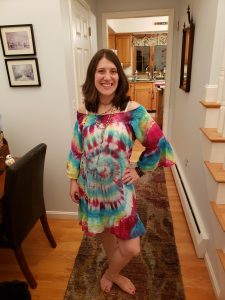 View of my tie dye dress. 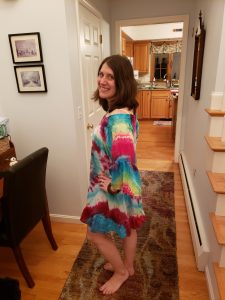 Side view – check out those sleeves!

Bring water and 1/4 c butter to a boil in large saucepan.  Add rice, return to a boil then cover and cook for 30 minutes or until rice is tender and water has been absorbed.  While the rice is cooking, thaw spinach by rinsing under cool water in a strainer.  When rice is done, let sit covered while you prepare the rest of the recipe.  Saute onion in remaining butter until translucent, then add the garlic and saute for another minute more until fragrant.   Stir in parsley, poultry seasoning, Worcestershire sauce, salt and cayenne pepper.  Add spinach and stir.  Add beaten eggs, shredded cheese and toasted almonds, mixing well.  Finally add the rice and cooked rice and fold until incorporated.  Thoroughly grease a bundt pan or circular tube pan with butter.  Press rice mixture into ring.  At this point you can cover with aluminum foil and put the ring in the refrigerator until the party begins (I made mine the night before).  When the party begins, pop it in the oven and it will be ready by the second round.  Bake at 350 F for 45 minutes to an hour.   Serve with chopped fresh tomatoes. 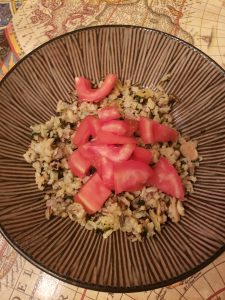