Well I’ve been having a bit of a freak out period the last few days.  My son’s awesome daycare provides snacks, and they are usually fairly healthy but last time I dropped him off right at snack time and he was given Cinnamon Toast Crunch.  I love Cinnamon Toast Crunch, but it is definitely just pure sugar.  He was happy as a clam so I didn’t think anything of it. He usually has cheese crackers or those veggie stick puffs and I’m sure the CTC was just a one off treat.  Anyway, a couple days later I mentioned it to Will offhand, and Will (who abhors cereal – if you want to waste 3 hours of your life, just use the words “cereal is part of a balanced breakfast”) said something like “we should probably provide his snacks”.  Will is usually pretty chill about this stuff so it freaked me out.  Julius gets really bad eczema so controlling all his food may help us figure out what causes flair ups.

Julius has also become increasingly more picky at mealtimes.  We’ve all seen the kids whose parents make them entree after entree for dinner until they finally eat one of them, and we REALLY don’t want to end up with that kid.  We also have friends who have extremely limited palettes and we don’t want that either.  So I started googling.  I hate the internet, I really do.  Anyway, we’ve apparently been doing everything wrong – we give him a rotation of the same 5 things for lunch or dinner.  Will and I don’t eat dinner until 9pm most nights because we don’t have time to make dinner for everyone after work until Julius is in bed.  So we make Julius a quick dinner – grilled cheese, chicken nuggets, meatballs, tortellini, avocados and hardboiled eggs are our go-tos.  Sometimes we’ll give him leftovers from our meal the night before but I make a lot of Indian and Mexican food and I make it spicy.  We can’t give him that.

So now I’ve decided I need to make dinners Julius can eat or else he’s going to become picky.  We also decided we have to spend extra time preparing his snacks for the next day or else he’s going to only want sugar.  Today I attempted to make dinner when I was by myself with Julius after work and I made him beet pancakes (one of our favorites).  Even though I did all the prep work the night before it still took a long time to make them while watching Julius.  The result?  Julius ended up in bed a solid hour late.  He didn’t like them at first, but after I put a bit of sour cream on each piece he ate quite a bit of it.  I consider that a win, even though fried anything is not exactly healthy.  Maybe I’ll just give up and sail the seven seas.  Good thing I created a pattern for a Jolly Roger for such an occasion!  We gave my dad a Jolly Roger for the pontoon boat for his birthday, so I decided to make the flag myself.  Now, you can too! 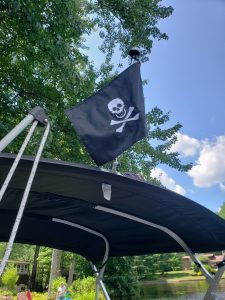 5 Responses to Hoist the Jolly Roger