Posted on November 4, 2019 by lexicolton

Julius ate an entire bowl of salad last night, and then asked for more!  By the end of dinner he had eaten a total of 3 bowls of salad!  Will and I eat salad almost every night with dinner, but usually Julius won’t touch it.  I’m not sure what changed his mind today.  Maybe it was that he helped me cut and wash the lettuce, or that I added cheese to it (he kept saying “Look Dada, cheese”) or maybe the fact that we gave him 2 different choices of salad dressing to dip it in.  (And no he didn’t load the lettuce up in dressing, though he did ask to drink the dressing at the end…) 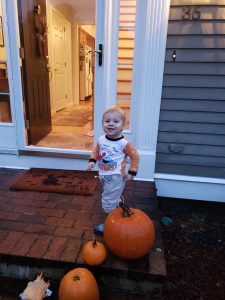 Speaking of herbivores, Impossible Beef debuted 5 weeks ago in stores on the east coast.  Wegman’s now sells the beef, frozen, in vacuum packs like you sometimes get those 1 lb packets of fancy meat like “angus” or “buffalo”.  I went out that night and bought six packs.  First impression is that it looks exactly like ground beef.  My next impression was that it is damn expensive!  Each pack costs $9, but I later realized that a package is only 3/4 of a pound bringing the actual price to a whopping $12/lb!  Sheesh!  But I must admit buying mostly vegetarian is cheaper than buying meat on a daily basis anyway, so having a pack of Impossible Beef a week still fits into our budget.

We’re definitely the target audience for the Impossible Beef.  I’m half-heartedly attempting vegetarianism, and Will eats whatever I make, but misses the meat meals I used to make.  The first meal I made with the Beef was “Hamburger Stroganoff” or as Will calls it “tasty beef stuff”.  I tried making it with Beyond Meat many months ago, and it was awful.  They add some kind of fake smoke flavoring to their Meat that doesn’t go at all with the mushroom flavor.  Perhaps they have changed that since then.  Since the advent of Impossible Beef on the east coast I’ve made “tasty beef stuff” twice (and a few other things as well).  It tastes nearly the same as “tasty beef stuff” with hamburger, and Will declared that the slightly different flavor made it “better” than the original tasty beef stuff.  I’d call that a win!

Some useful tips for cooking the Impossible Beef.  It cooks nearly the same as a pound of 90/10 hamburger except it is slightly more inclined to stick to the bottom of the pan so requires more stirring.  I usually brown hamburger at medium temp.  I’ve tried cooking it from frozen (like I sometimes do with hamburger when I’m super lazy), browning the layer touching the pan, then flipping it over and scraping off the brown bits.  I also tried defrosting it in the microwave first like I do with beef and I found defrosting on the “defrost meat” setting for half the amount of time for meat – for me that’s 6 minutes – and flipping it halfway through worked great.  They both work, but the easiest method, if you have the foresight, is to just defrost it in the fridge the night before. 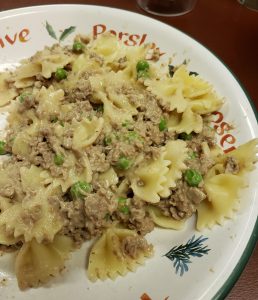 Brown Beef in large saute pan, adding onion halfway through.  After Beef is browned and onion is soft add cream of mushroom soup and sour cream and stir to combine.  Finally add frozen peas, cover, reduce heat to low and simmer for 10 minutes while you cook the pasta.  Serve over pasta.  (I like to mix it all together in the big saute pan to serve). 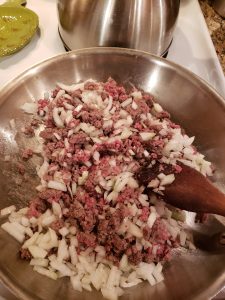