Well, my laissez faire version of beekeeping this year seems to have completely worked out.  I hived the bees, and literally have not opened the hive the entire season, but just from observing the hive exterior it seems to be rocking!  Had I been interfering more I probably would have put another hive box on halfway through the season, but I just decided to let them be.  The one thing I did decide to do this year is put a mouse guard on the hive this autumn to prevent any rodents from entering as the days start to cool off.

Since I took the hands off approach to beekeeping this year the only beekeeping related thing I’ve done is finally harvest that box of honey left over from last season’s bees.  It has been sitting in my garage since last spring, waiting to be harvested.  A couple weeks ago, Will moved it closer to the garage entrance and I left my garage door opened on my way out to an errand, only to discover the bees had found the honey!  I had to wait until sundown when the bees returned to the hive to close the garage door and for the last couple weeks I’ve had to be extremely careful to close the garage when leaving.

After a couple weeks, I finally grew tired of this caution and finally decided to harvest the honey.  We finally used the honey extractor that I purchased so many years ago!  Luckily the extractor hasn’t been going to waste all this time – two of my other beekeeping friends have been able to use it several times.  One of them lent me their sieve, and that is where a large portion of the honey is now draining after the whole process.

Our process was simple – I used a large serrated knife to decap the frames while Will spun out the honey from the frames in the extractor, two frames at a time.  We probably could have done four frames at once but it took me so long to decap the frames, that Will was actually ahead of me in the spinning process.  Things were going swimmingly until some wasps and hornets found the frames and I accidentally put my hand on a wasp which promptly stung me.  Bees don’t bother me one bit, but wasps and hornets scare the heck out of me.  They are so much more aggressive than docile bees and really give bees a bad rap for just sharing the same color spectrum.

My favorite part of the whole process was that Dany would try to get very near the frames, very slowly and carefully, with her tongue partially stuck out the whole time.  It was as if she was thinking, “if my tongue just accidentally grazes this honey as I walk by, I can’t get in trouble for stealing it.”  It was rather comical to watch her approach the frames “stealthily” and I just kept picturing Winnie the Pooh.  After we finished spinning out all the frames, I let Dany play clean up crew around dusk when the bees and wasps had left.  She seemed to enjoy that.

After the honey drains I’ll have to strain it – then it will be ready for mead – or my normal breakfast routine! 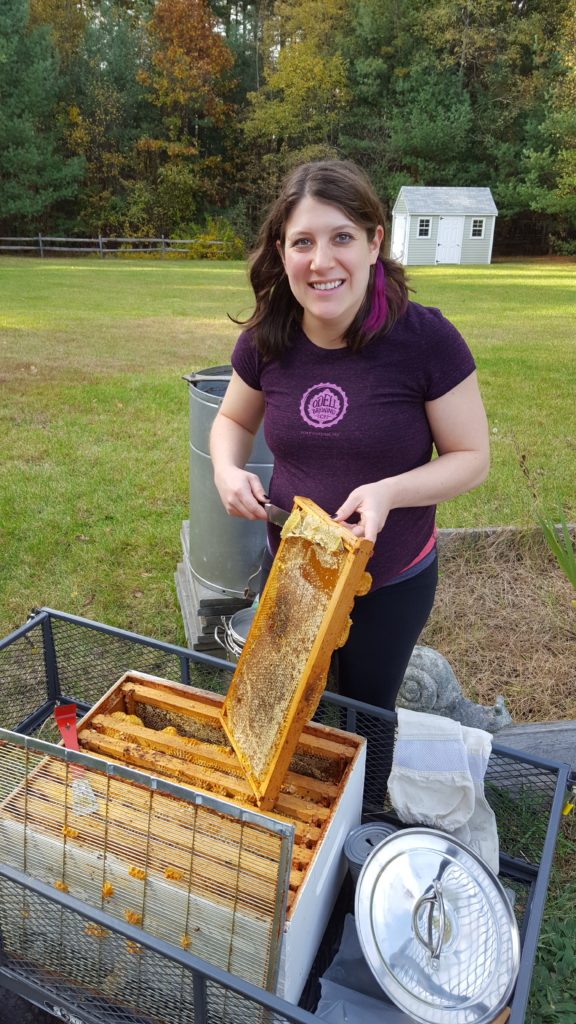 Here I am decapping the frames. 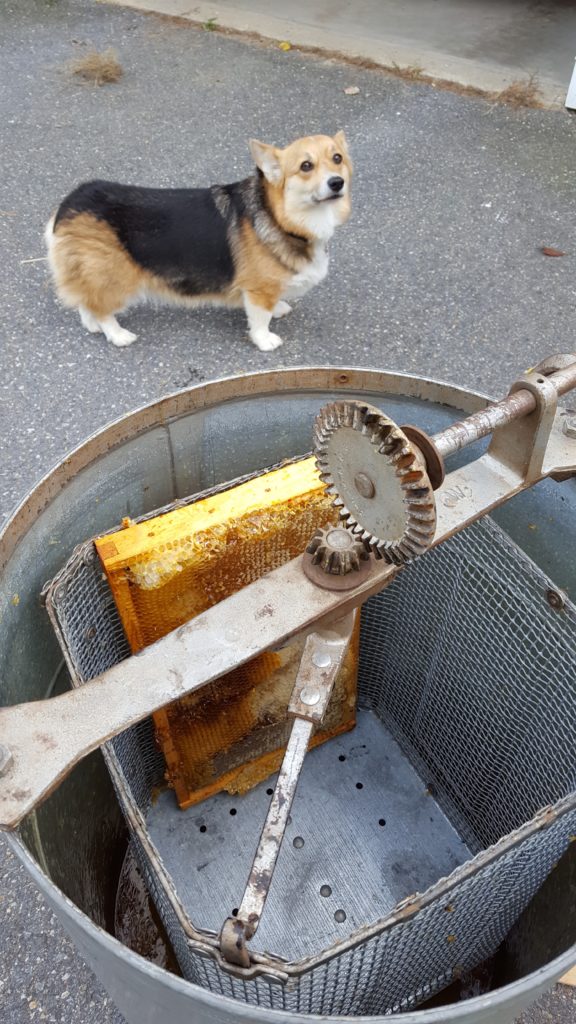 Dany looks on, concerned, as Will loads the frames into the extractor. 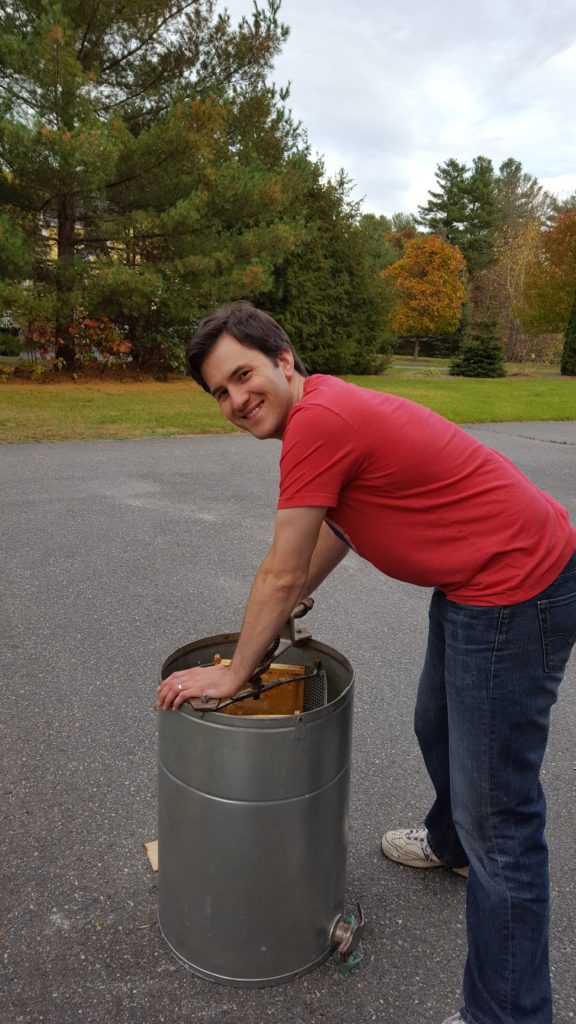 Will spins the extractor. 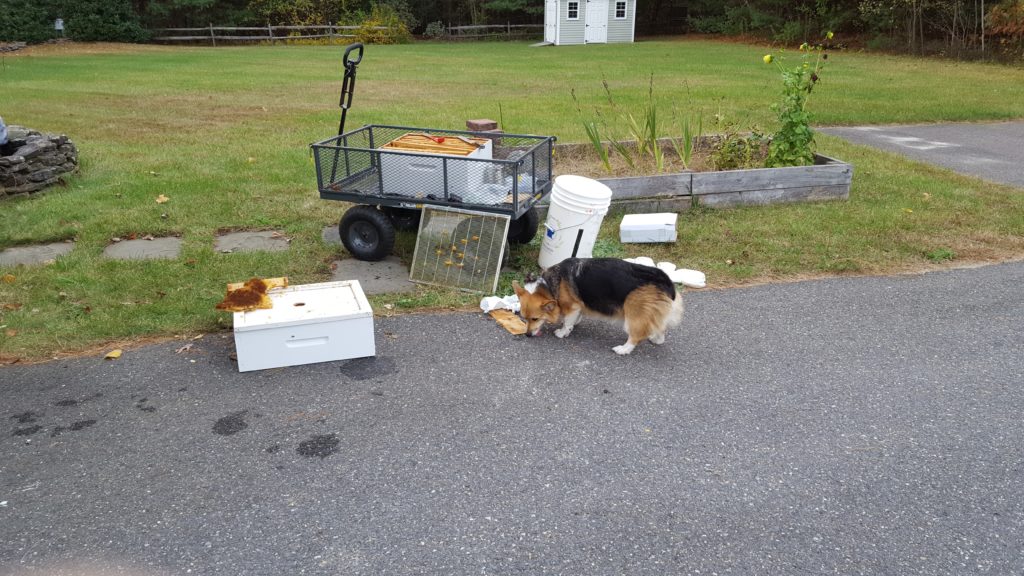 Our honey harvest draining into a 5 gallon bucket (we didn’t get nearly 5 gallons though!