Patricia is such a silly lady.  It’s funny to see her personality evolve.  Patricia has been eating solid foods like a champ.  We started her a few weeks ago, and already she’s glomming things down.  I am pretty sure Julius didn’t start eating solid foods in earnest until 9 or 10 months.  She is a MUCH messier eater than Julius is though.  Julius would let us feed him and would open his mouth for more, taking dainty bites.  Patricia grabs the spoon while you are feeding her, particularly the end of the spoon with the food, then forces it into her own mouth.  After that she gums the spoon for a while, then drops it and smears food all over her face.  She is STRONG, so once she has hold of that spoon it’s all over until she gives it up.

The other day I went to clean her up after smearing herself with food and I ran her hands under the running water.  She got so excited that she started pumping her legs while I held her.  Since she was so excited about the water I decided to give her a bath instead (and of course Julius wanted to come too).  As we were waiting for the tub to fill up, she was squealing with joy and trying to climb into the tub (did I mention that she is almost crawling)!  She was SO EXCITED!  I don’t know if Patricia’s actions are just more obvious than Julius’s were or we are now more accustomed to baby language, but it is so much easier to interpret what she wants than it was for us with Julius.  It might be a bit of both.

On the other side of things, Julius these days is a total ham.  (Actually who am I kidding, as a baby Julius was a total ham.)  He has started singing us silly songs that he has made up.  Like “today is waffle day” and “the muffin song”  (not to be confused with do you know the muffin man).  Some of the lyrics are over the top.  My absolute favorite song I wish I had video recorded.  It had an actual tune that I cannot now remember, but the lyrics are the real gems.  Here you go,

Everybody is a bagel

Every single person is wearing a bagel costume

I can’t make this stuff up.  I can however make some silly bugs.  Let’s get to it. 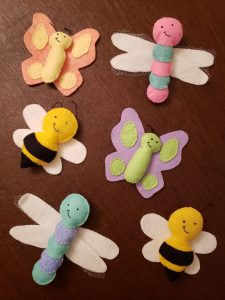 Cut out all pattern pieces as directed.  Do not add seam allowance. 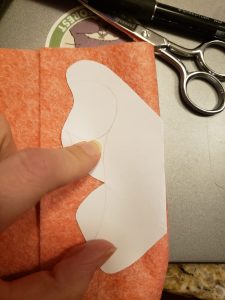