Today was the first day of “Mama Preschool” in which I once again pretend I am qualified to home school my child (I am not).  At least this time we’re not pretending to do it while we both work.  We’re still afraid of sending Julius to daycare until at least Will gets the vaccine, but if he were still in daycare he’d be in preschool by now.  Julius was pretty disappointed when he realized “Mama Preschool” was not the same as actual preschool.  He told me multiple times “I want to go to preschool!”  I felt like I’d deceived him a bit…

Through no credit of my own, Julius’ vocabulary has dramatically improved over the last year.  It is really funny, he still makes up words and uses them in sentences, but when you ask him what they mean he tells you that they don’t mean anything.  He still has some gems in his vocabulary though.  For instance the other day he was pushing a box (imaginary firetruck) around the floor with his favorite stuffed dog Gaga inside and shouting “the smoke protector is coming!”  I explained to him several times that the thing on the ceiling was a smoke detector but he would not be convinced.  Oh the irony.  And when he doesn’t want to go to bed he tells me “I am going to unscape!”  And then when he wants you to catch him, “I am unscaping…” Adorable (and also when he’s escaping, frustrating).

Well this is the last installment of my how-to’s on Julius’ Winnie the Pooh Adventure.  Today I’m going to show you how I made Owl’s Blustery House.  So I have to be honest – this is far from my best work.  I had grand visions of making a really cool cardboard house that looked exactly like owl’s tree house in Winnie the Pooh and the Blustery Day.  Something to rival the catbus.  In my dreams it had peaked roofs and everything.  Unfortunately as I got closer to Patricia’s due date my dreams slowly degraded.  The day before the party on the expected due date of my second child I devoted about 45 minutes to this little number.  Honestly he uses it all the time so in terms of effort-to-use ratio, we’re really getting our money’s worth. 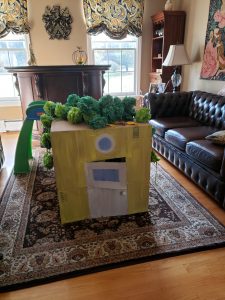