Thank you all for asking about the bees and their queen after the bear attack.  I don’t have a ton of information because I did not want to bother them on Saturday and it rained today and Sunday.  What I can tell you is that the bees were going in and out of the hive as expected on Saturday carrying pollen and there were a lot of defenders at the entrance to the hive.  I’ll keep you posted when I check on them next.

On a lighter note, last week I held a “Ladies Night” at my house.  In some of my other posts you’ve probably seen that I like to invite friends to get together to paint things.  In the past we’ve done ceramics and pet silhouettes on canvas.  This time I decided we’d be painting wine glasses!  The reason being that I have a ton (25 or so) Nashoba Valley wine glasses that they give you during the tasting.  Yes we’ve been there that many times, or nearly.  I had read that you could remove the labels of certain labeling processes using Star San.  I was pretty sure these met the description so I have several sitting in a mixture of it.  Unfortunately it seems be incorrect, or the wrong type of label since its been about 2 weeks now.

So  instead I purchased 8 glasses from the dollar store.  I then bought 10 different colors of “multisurface” acrylic paint, a set of paintbrushes and paint palettes from Michaels for $25.  Combined with paper towels, plastic water cups and some aprons I had on hand we were ready to paint! 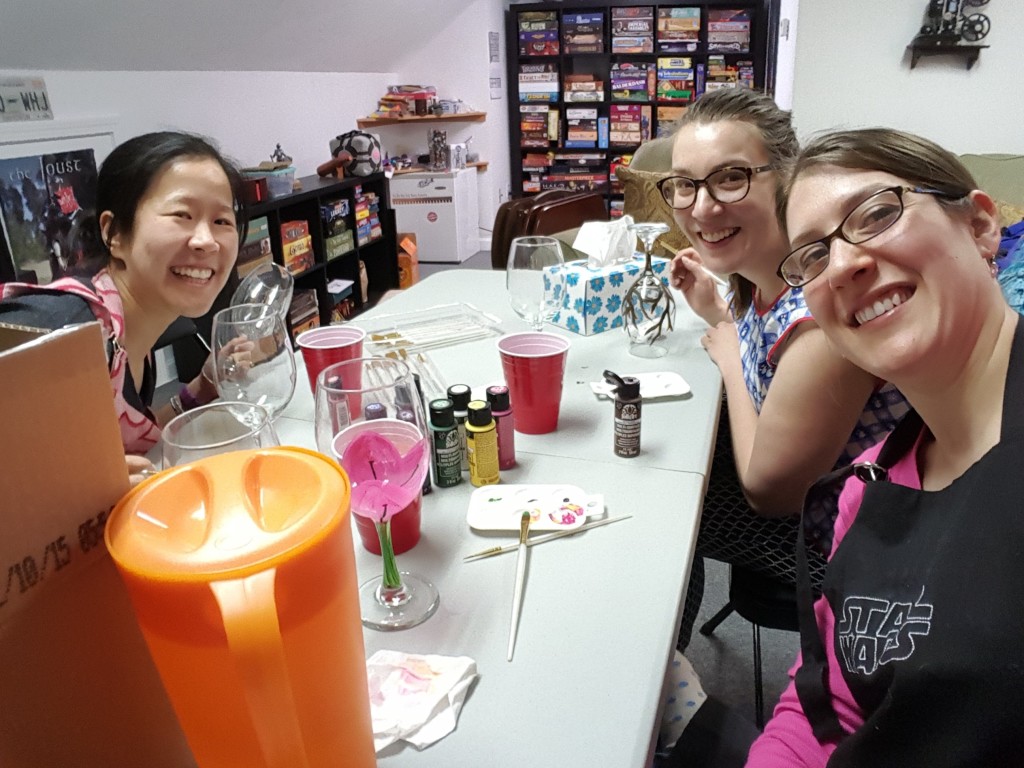 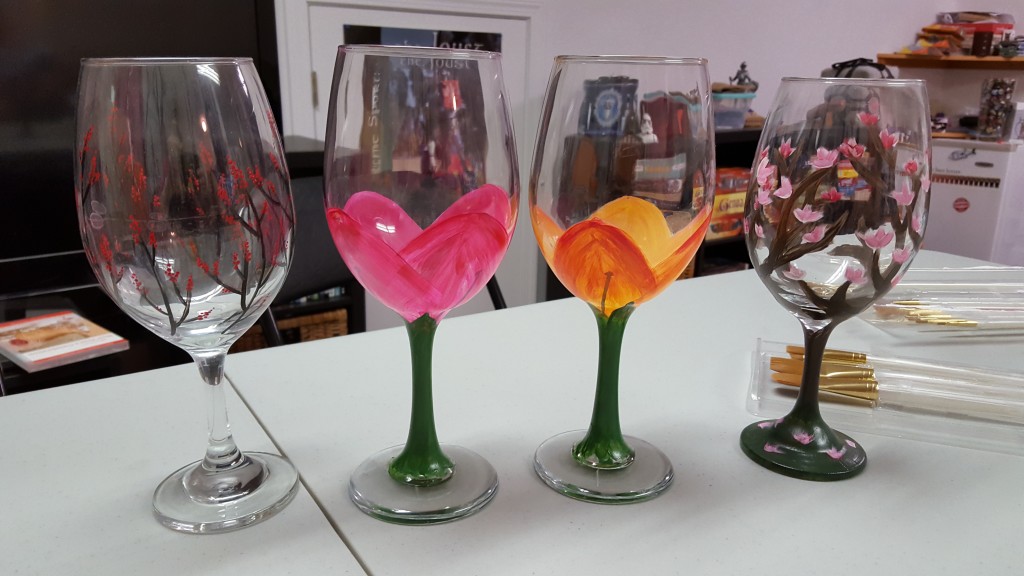 Look at our cute glasses!

Before painting I like to serve appetizers and drinks.  I have been wanting to use these fabulous tartlet pans that I got from my wedding so I decided to make some mini quiches since it would be easy to make them ahead and freeze them.  Plus with a double batch of dough I could make ahead and freeze mini galettes for dessert too!  Well I ended up getting too busy to make the mini quiches ahead of time and everyone was too full for the mini galettes I had made for dessert, but I have recipes and instructions below in case you want to try for yourself.  I made more quiches the next day to freeze and Will & I ate one of the mini galettes yesterday for dessert and it was awesome.

This is my favorite recipe for pie dough.  It is from Williams Sonoma Food Made Fast Baking (I love this book):

It makes about 3 single crust pies.  I always make the full amount and freeze some for later.  To freeze take portioned disk and wrap in waxed paper.  Place in freezer bag directly into freezer.  Thaw in refrigerator the day before using.

To make the mini galettes, follow the steps as above to make the dough and berry filling.  When making the filling be sure to use frozen fruit and do not let the filling thaw.  Instead of rolling into one large round, form dough round into 6 rounds about 6 inches wide each.  Fill with frozen filling and fold up sides as in recipe.  I then like to paint the top of the crust in egg yolk and then sprinkle on sugar in the raw.  To freeze, place on parchment paper on a baking sheet in the freezer for 2 hours or until frozen.  Wrap in waxed paper then place in a freezer bag.  To cook directly from freezer, place on parchment paper on a baking sheet and cook in a 425 degree oven for 20 minutes or until brown and bubbling. 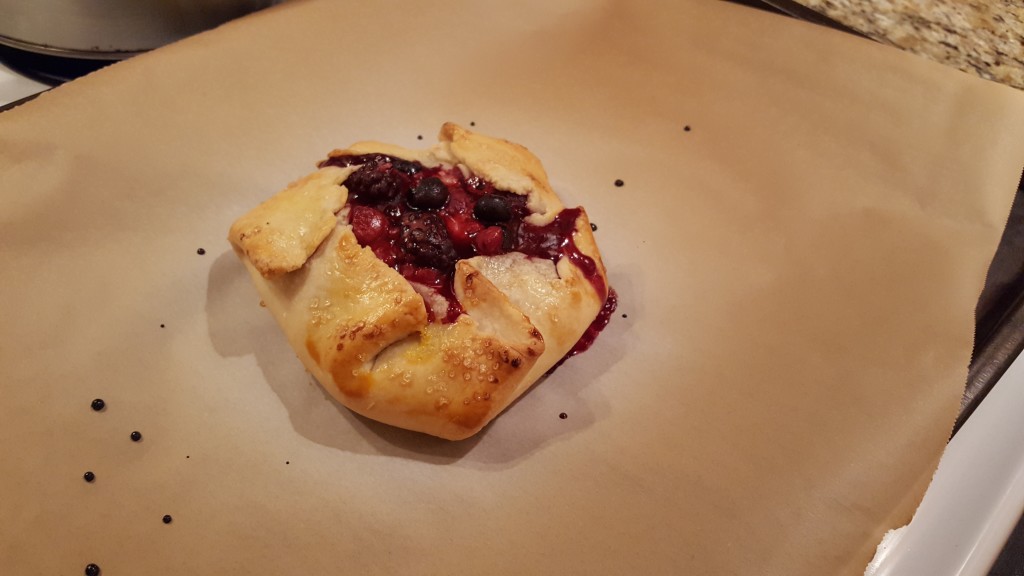 Using 1/6 of a disk of dough from the above pie dough recipe, roll out your pie dough to fit generously in a tartlet pan. 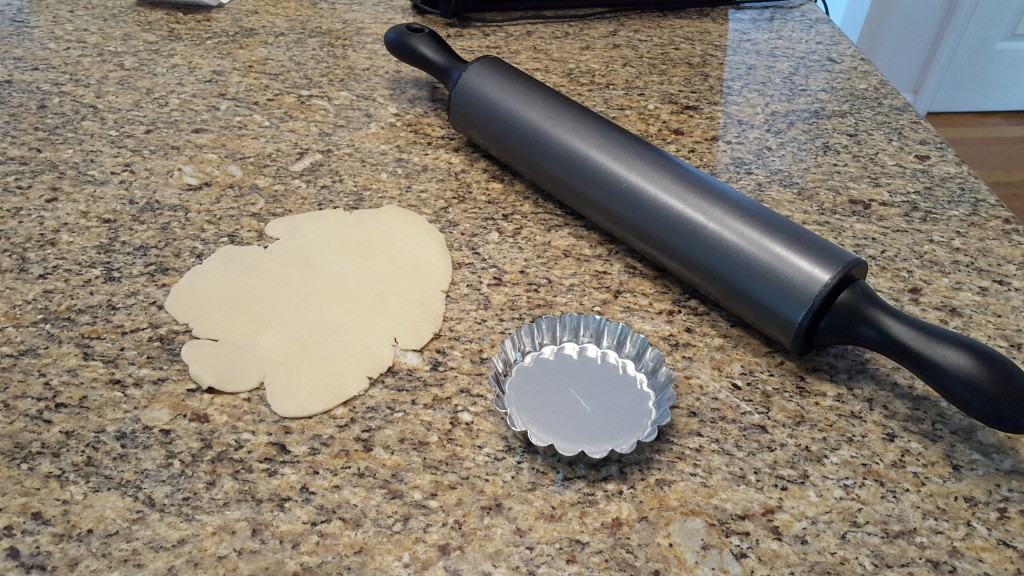 Press the dough into the tartlet pans letting the excess dough hang over the side.  Be careful not to stretch the dough.  I do not butter the pans. 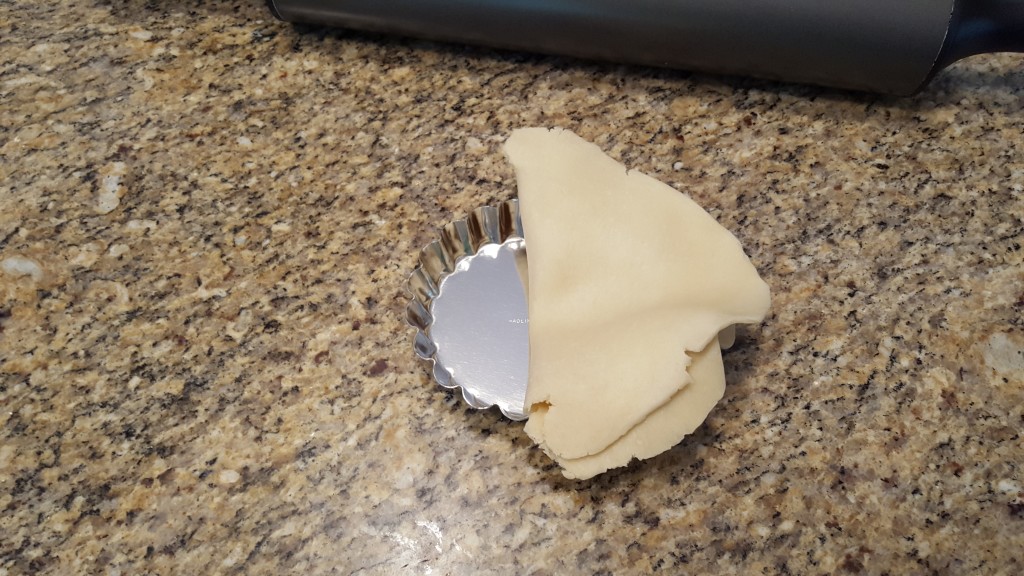 For the next step I gently press the excess dough over the side of the pans and push down enough to make an indentation.  You’ll see why in a few steps 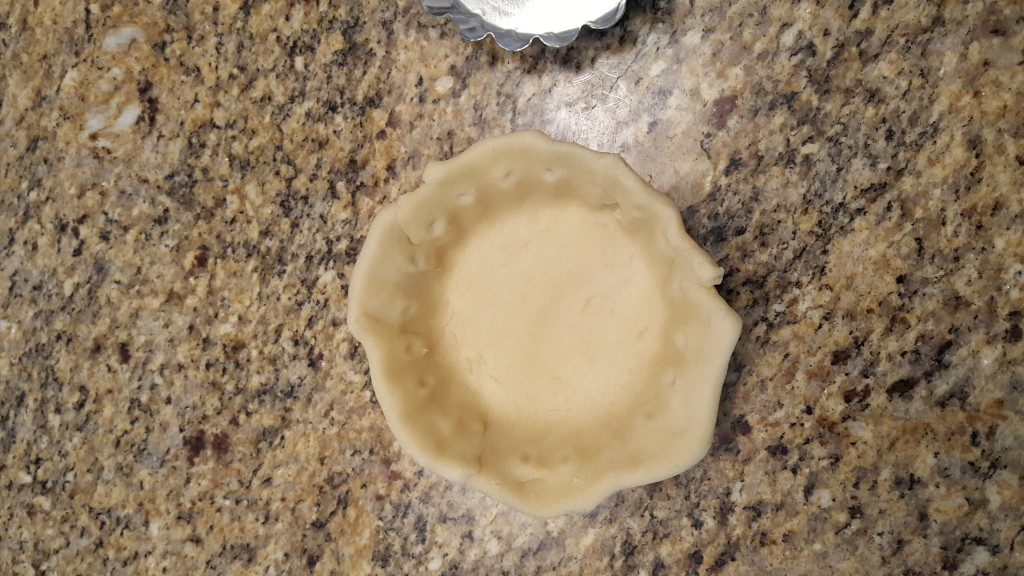 Add parchment paper in each crust and pour beans or pie beads into the crust to weight it down. 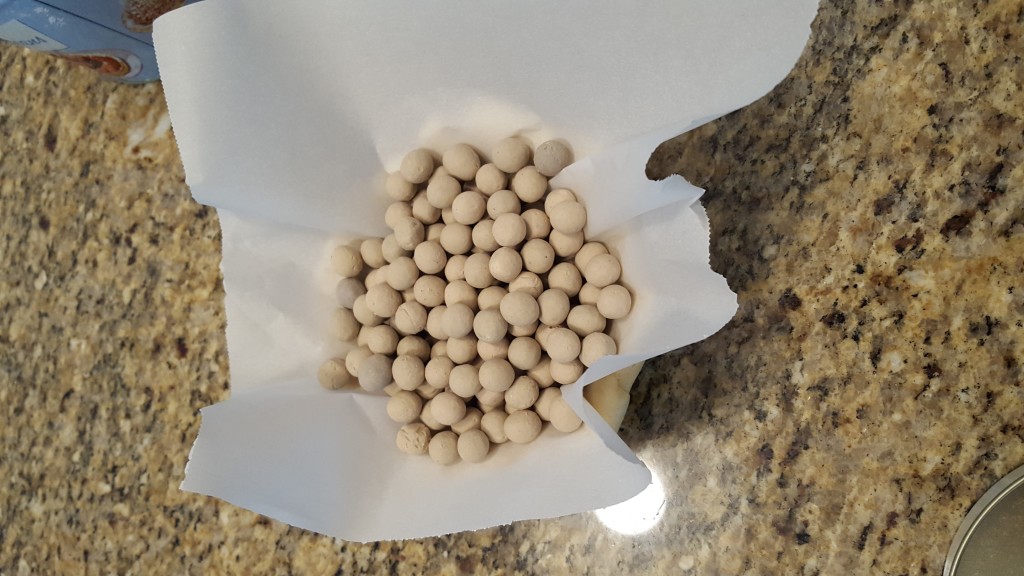 Cook for 10 minutes in preheated oven at 425 or until just barely beginning to brown.

Remove the parchment and baking beads and prick the bottom of the crust with a fork.  Return to the oven for 5 more minutes or until the bottom begins to look less opaque and slightly cooked. 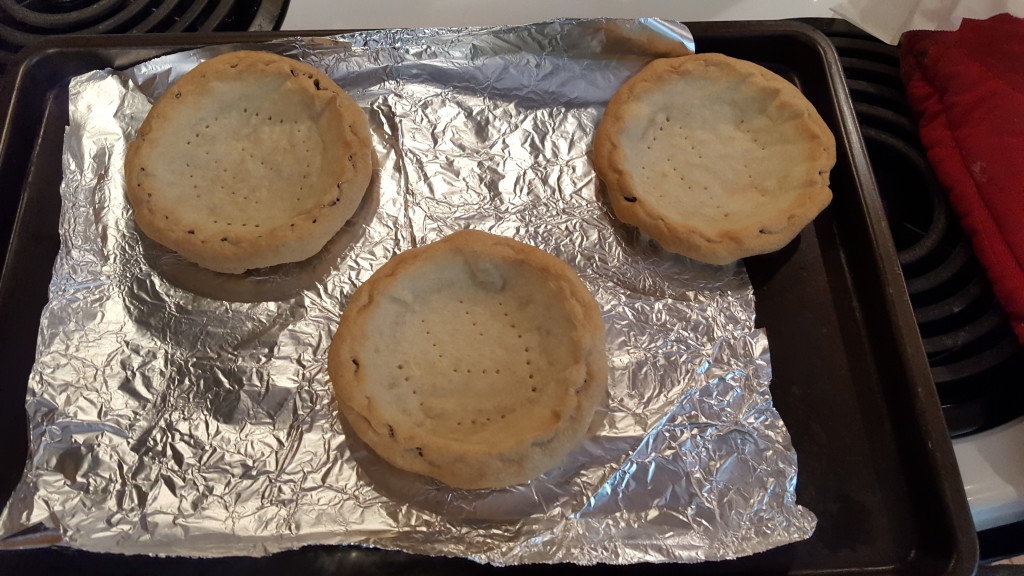 Remove from oven, invert on a plate and press down to break off that overhanging layer of crust 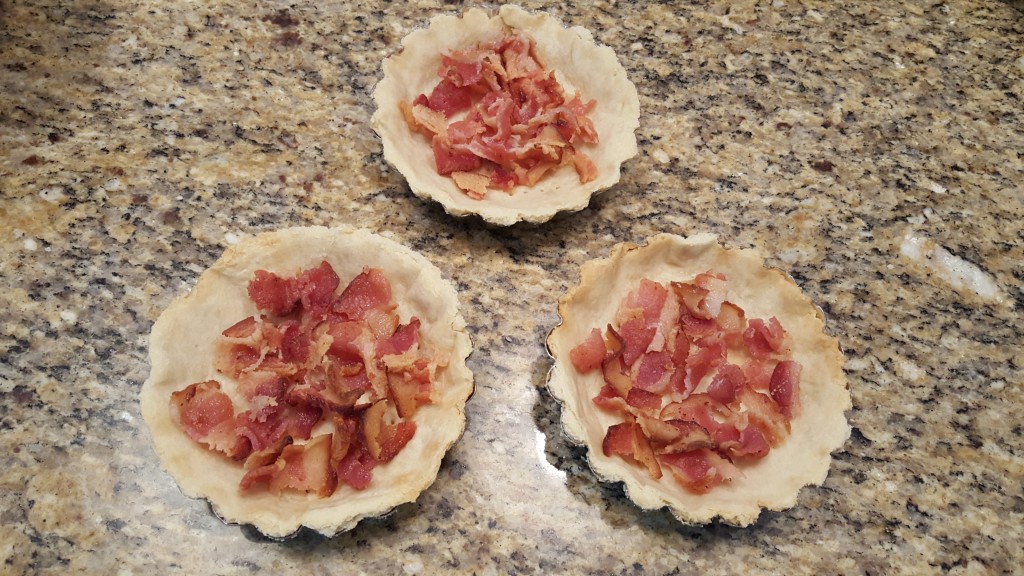 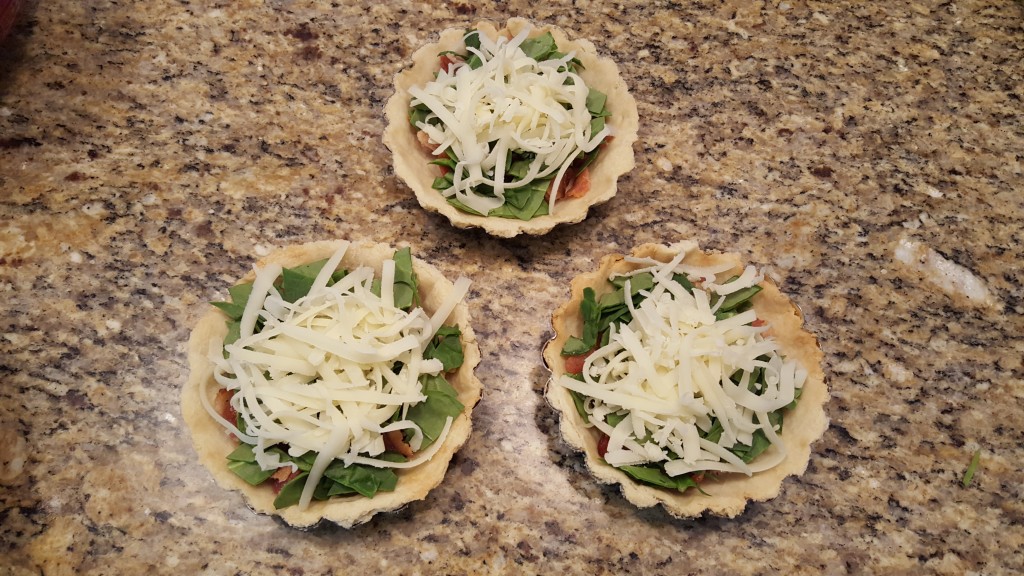 Pour egg mixture over everything being careful to keep it from spilling over the edges. 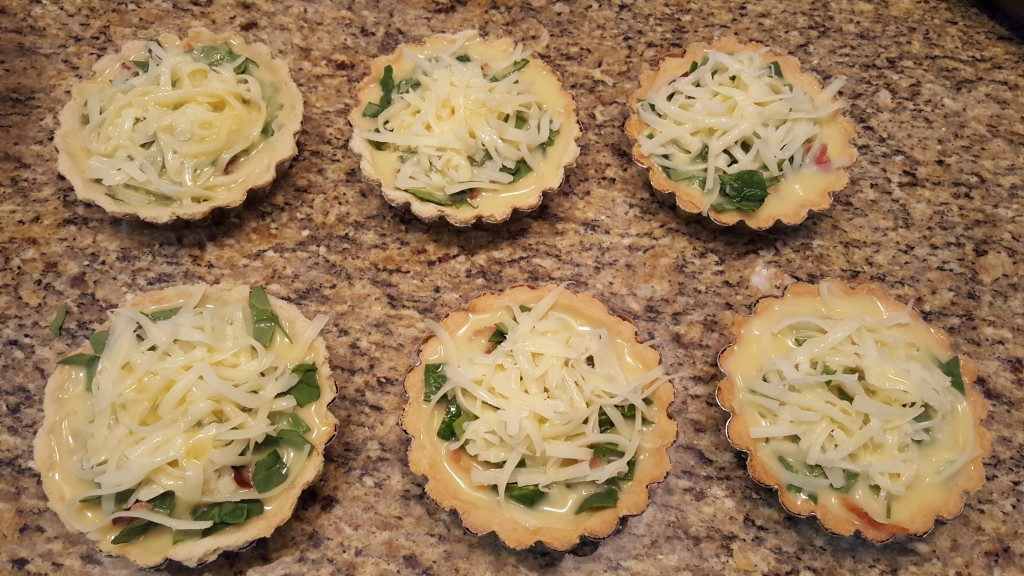 Bake in 375 degree oven for 20 minutes or until quiches are set.

Either serve immediately (invert quiche and gently remove from tart pan before serving) or to freeze let cool slightly then move entire baking sheet to the freezer.  Freeze on tray for 4 hours or until frozen.  Wrap in waxed paper then store in a freezer bag.  To reheat from the freezer, bake at 375 degrees for 20 minutes or until heated through.