Well I completely forgot yesterday was Monday which is why I’m late posting this.  You see, we had a baby last week so I’m a bit out of it.  That’s right!  We had a baby!  So that means another birth story.  This one is shorter than Julius’ story but once again you should skip this post if you aren’t interested in labor and delivery.

Since this was my second baby everyone in the world warned me that the second baby comes much faster than the first.  This meant that I was actually a bit worried about getting to the hospital this time since once again I planned to deliver at Women & Infants in Providence.  For this reason we planned to stay with my parents in RI in the days leading up to my due date… but as always I had too much stuff to get done and we stayed at home until Julius’ birthday (the day after the due date).

I was convinced that Julius and the new baby were going to have the same birthday, just to mess with me, since planning 2 birthdays for the same day would be stressful and we all know how much I love planning birthdays.  The morning of Julius’ birthday I had a bloody show.  At that point I was 100% convinced that they were going to share a birthday.  Wait, let me rewind a bit more.

At my 36 week appointment they checked the size of the baby, and they said she was on track to be over nine pounds.  They had said the same thing about Julius but he was less than 7 pounds… so I mostly didn’t believe them. And yet…my stomach was A LOT bigger this time around, even though I had been diligently exercising far more.  So I thought maybe they could be right.  I explained to the doctor around 38 weeks that I was scared I could not deliver a baby as big as they were projecting and asked if this was a reason to be induced.  She said that generally baby size was not something they considered as a candidate for induction until after the due date, but that the blasted PUPPP rash was.  After some deliberation I decided I didn’t want to be induced for the godforsaken rash.  (I wagered that if I had survived it last time without throwing myself out a window, I could probably do it again.)  Ideally I wanted to be in the hospital as short as possible so I could get back home to Julius.

Anyway, because of my concern about the baby’s size I had opted for my doctors to do membrane sweeps at my last three appointments to attempt to get me into labor naturally.  Okay now back to Julius’ birthday.  So between the membrane sweeps doing their job, me losing my mucus plug, and my superstition about having birthday twin siblings, I was convinced I was going to go into labor that day.  We had planned a party for Julius on his birthday and the only invited guests were my parents.  I didn’t go into labor during the party, but since things were getting real we decided to enact our original plan to stay with my parents until I went into labor.

Well not a whole ton happened until I started having some painful contractions just after I went to bed the night of the 10th.  After an hour of walking around and realizing they didn’t seem to be slowing I finally woke Will up at 1:45am.  I was pretty sure I was in labor, but since I could still talk through the contractions I didn’t think I was in active labor yet.  Will started timing the contractions, and they were every 1.5 minutes and about 30 seconds each.   Will said that I should probably call the doctor because some websites thought this was when you should head to the hospital.  After waking up my mom for consultation I called the doctor on call and based on the contractions not being too horrible, he said I was probably not yet in active labor, but since it was my second baby I might want to consider heading to the hospital.  After some convincing at 3:30am we headed out.

No one was in the triage waiting room when we arrived, but there was an ambulance outside with 3 first responders in hazmat suits, unloading a stretcher.  They must have noticed I was concerned because they assured me that they were clean and hadn’t picked anyone up yet.  Yeesh.  The nurse brought me into a room in triage and after monitoring my contractions had a resident do a cervical check.  I was only at 4cm.  They told us that usually they wouldn’t admit someone to labor and delivery at 4cm, but since my contractions were so close together and they hadn’t sent many people up to labor and delivery tonight, they thought the attending physician might send me up anyway.  They sent me up to a labor room around 6:30am.

They asked me before I went up if I planned to have an epidural to which my answer was “heck yes”.  I told them I didn’t think I needed one right away because the pain was bad but manageable.  When I got up there though they immediately gave me the epidural.  Those things really are magic.  After the epidural the doctor who I’d spoken to on the phone came in to check me and I was at 6cm, 100% effaced, but my water still hadn’t broken.  He broke my water.  A short while later there was a shift change and a new doctor and nurse introduced themselves.  The labor nurse noticed my contractions had slowed a bit and gave me a tiny amount of Pitocin to get them going again.  Fifteen minutes later I told Will that I was feeling some serious pressure down low and I thought I had better call the nurse.  The nurse and doctor came rushing in and I told them I felt the baby very very low.  They had me lift my legs up and do a test push during a contraction and they both smiled and said “yup, time to have a baby”.

From there they got me into the stirrups and I pushed twice during one contraction, and two more times without a contraction and the baby was out.  I remember thinking two things when I first held her “wow she is big” and “why isn’t she screaming bloody murder?”  I actually asked the second question out loud and they said they weren’t concerned and sure enough she started crying a second later.  After everything was done, Doctor Hawa came back in two more times to see if they’d weighed the baby yet.  He said his guess was 8 lbs 11 oz for the baby – but he wouldn’t be surprised if she was 9 lbs…  She was 9 lbs 3.6oz and 21.5 inches!  Holy moley!  Welcome to the world Patricia Naomi Colton! 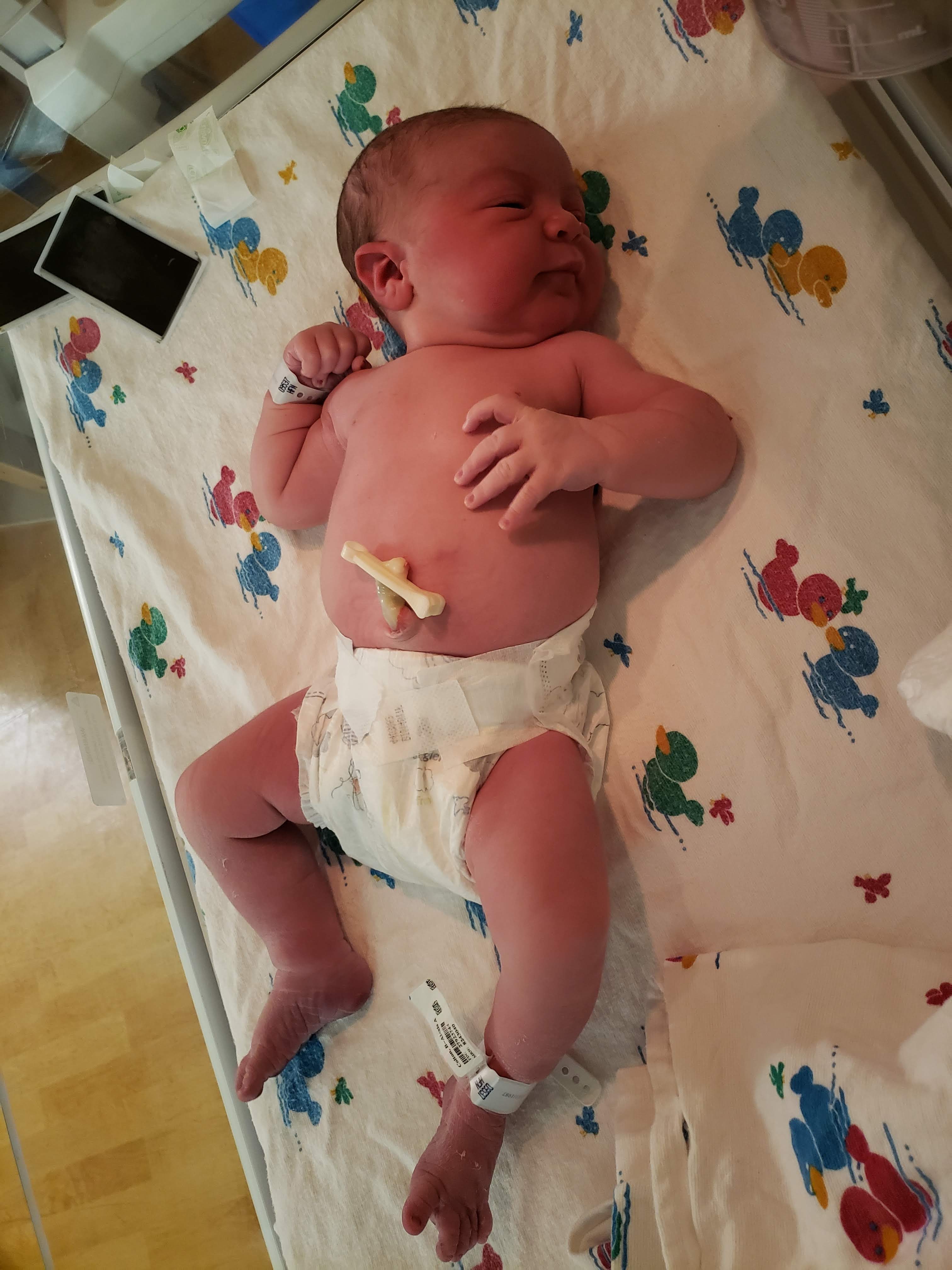 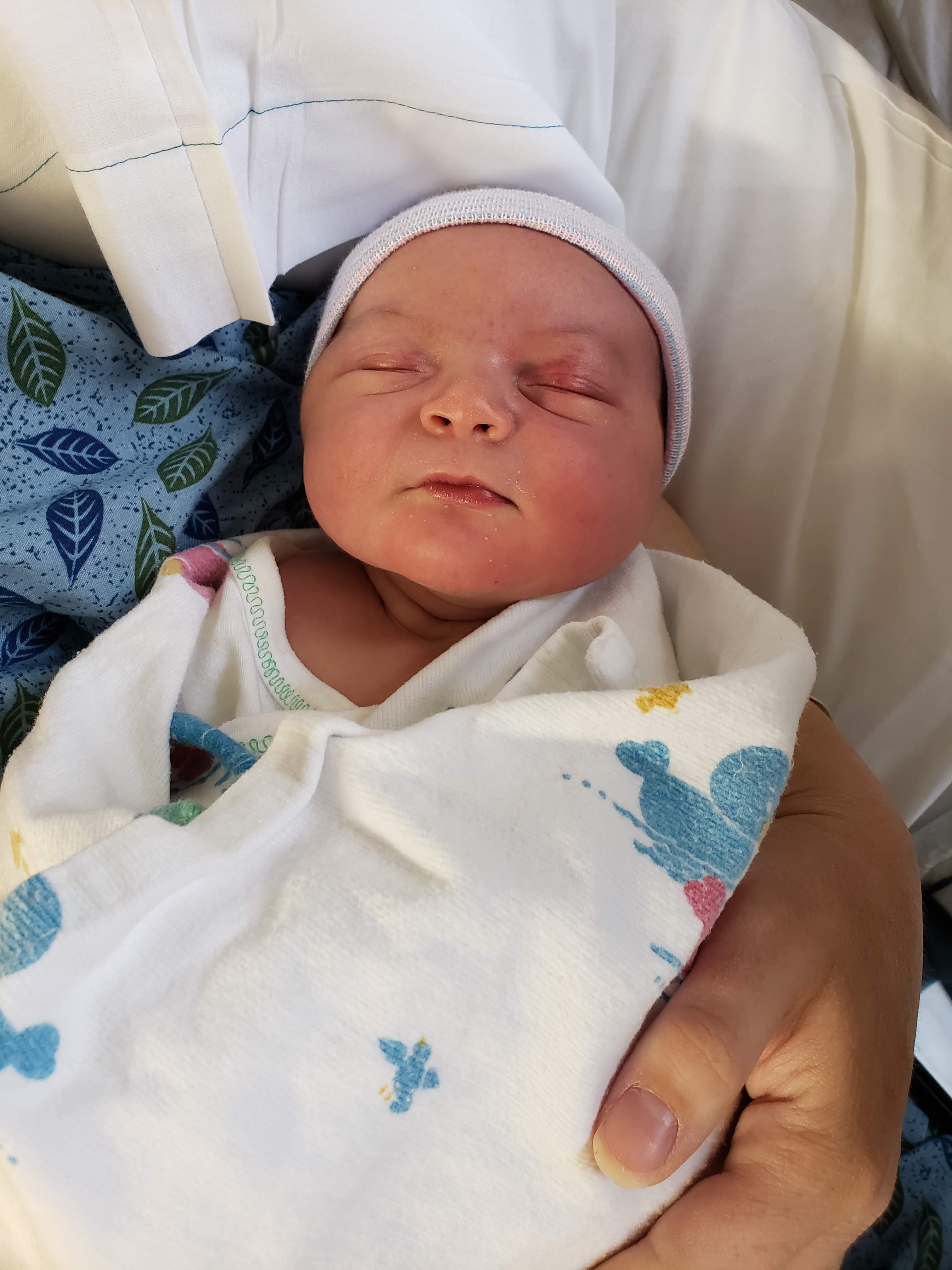 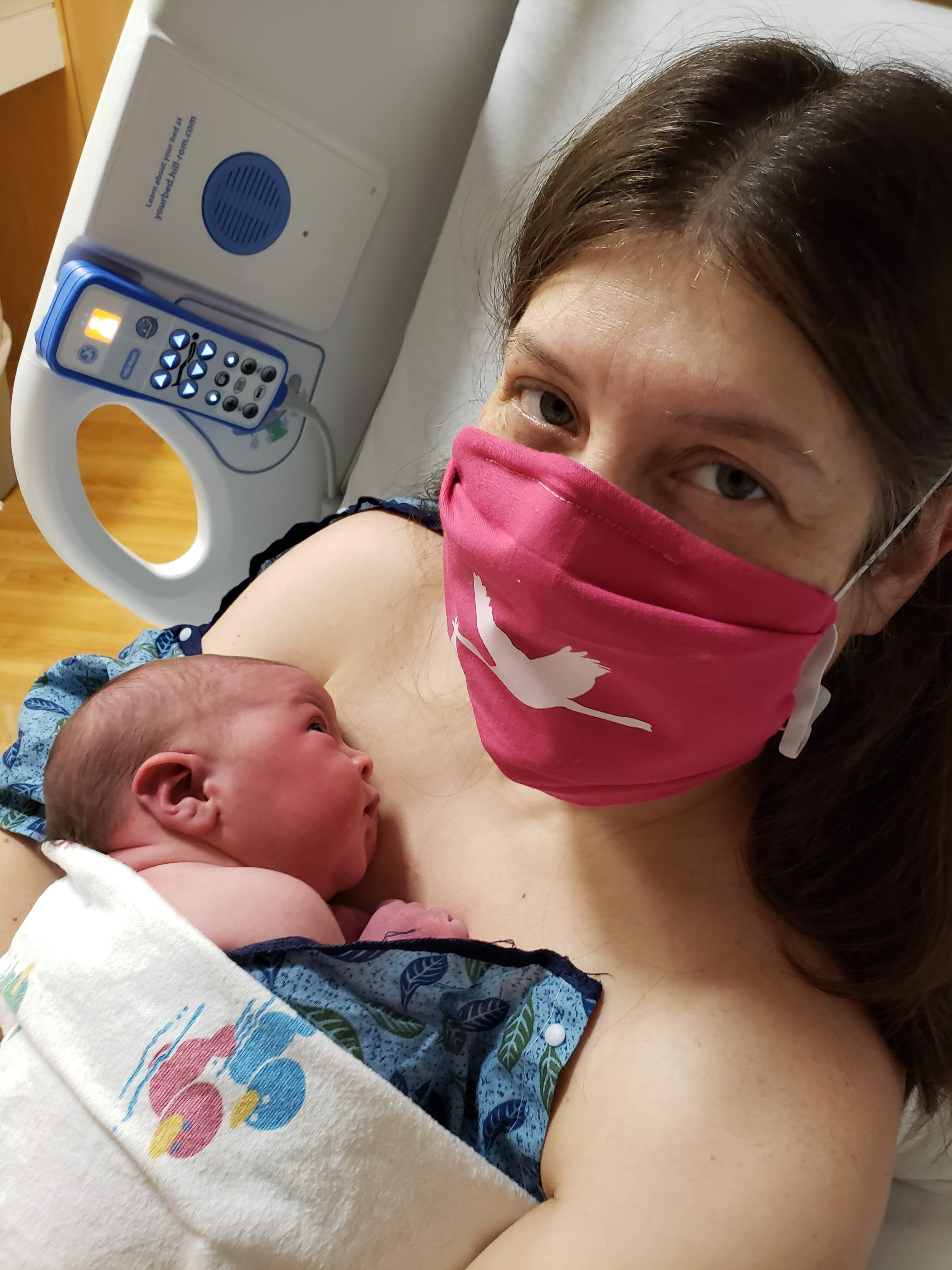 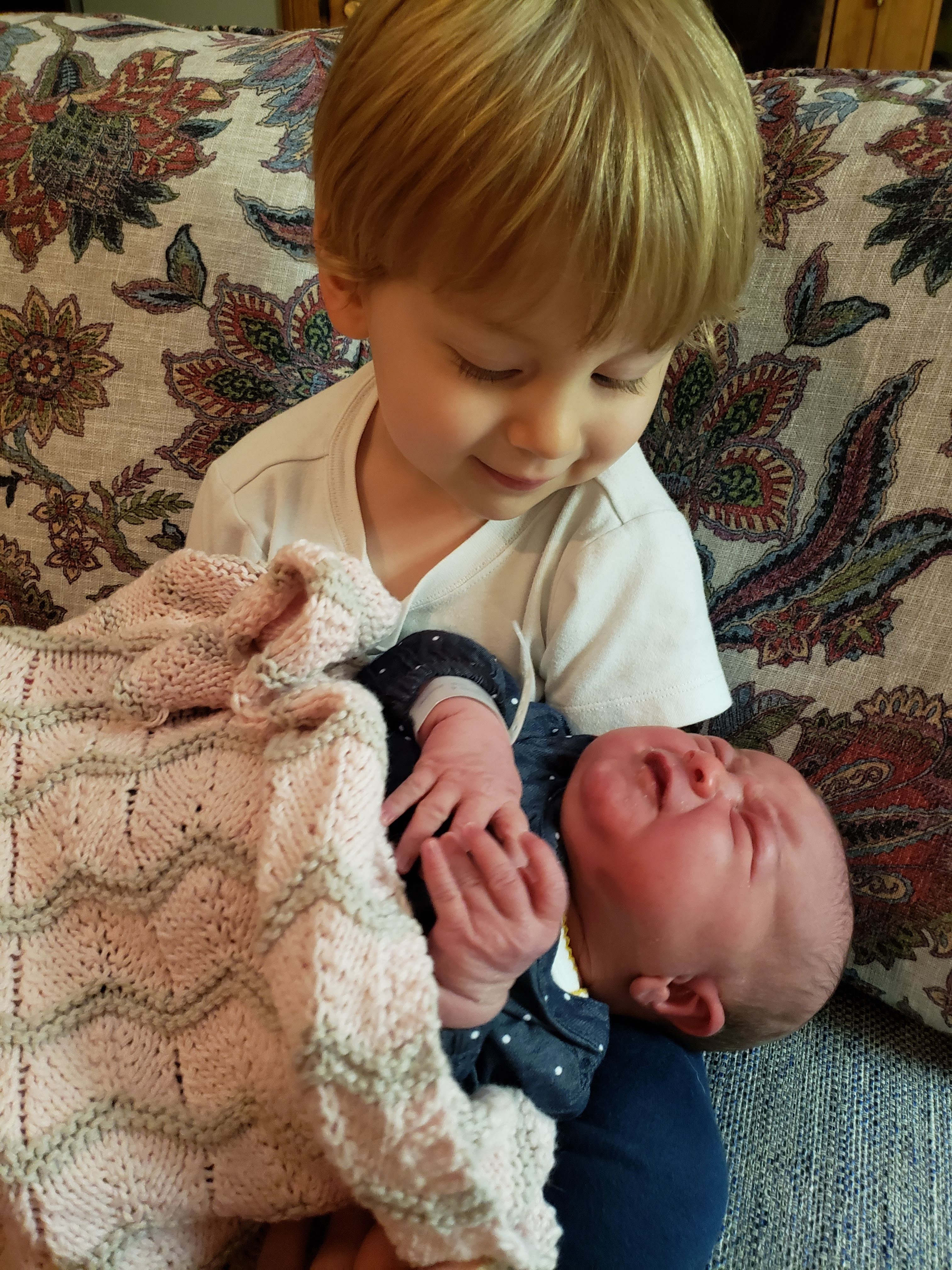 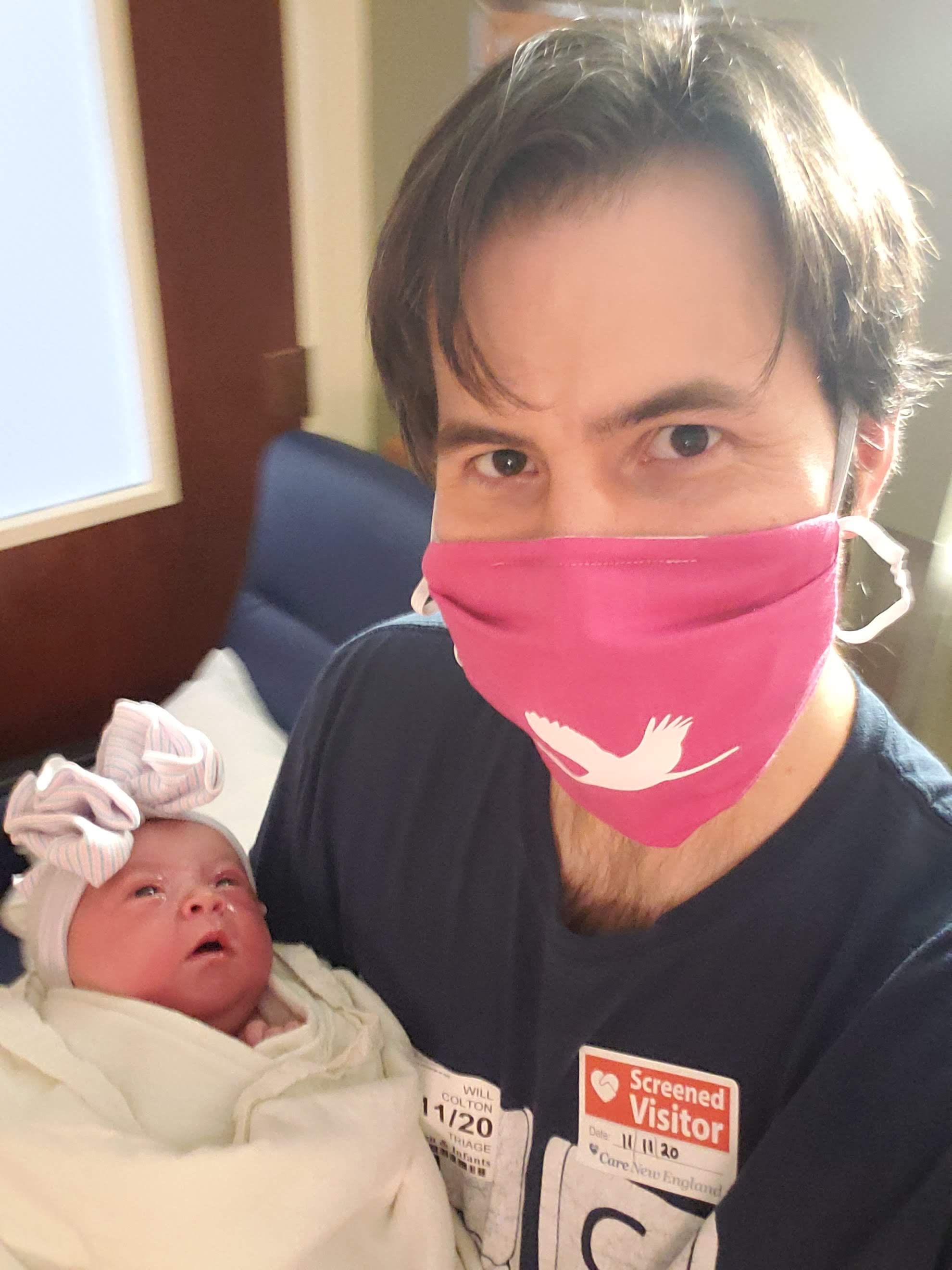 This entry was posted in Uncategorized. Bookmark the permalink.

One Response to Patricia