Posted on December 2, 2019 by lexicolton

Okay I know I said I would show you the play kitchen soon and there is no time like the present.  Here goes…  Let me start by saying Julius LOVES it.  When he first opened it I’d only given him some fake eggs and some old wooden fruit I had along with a bunch of pots and pans, baking sheets and mixing bowls I’d gotten from the thrift store.  All of it cost me around $25, even though one of the pans was $6!  I felt better getting them used rather than buying the Melissa and Doug sets that were manufactured just for play.  Anyway, after I gave him the set I asked him to make me some eggs and he immediately took out a pot, put all the eggs in it, pretended to fill it with water, put it on the stovetop and turned it “on”.  Will looked at me with an impressed look and mouthed “success!” 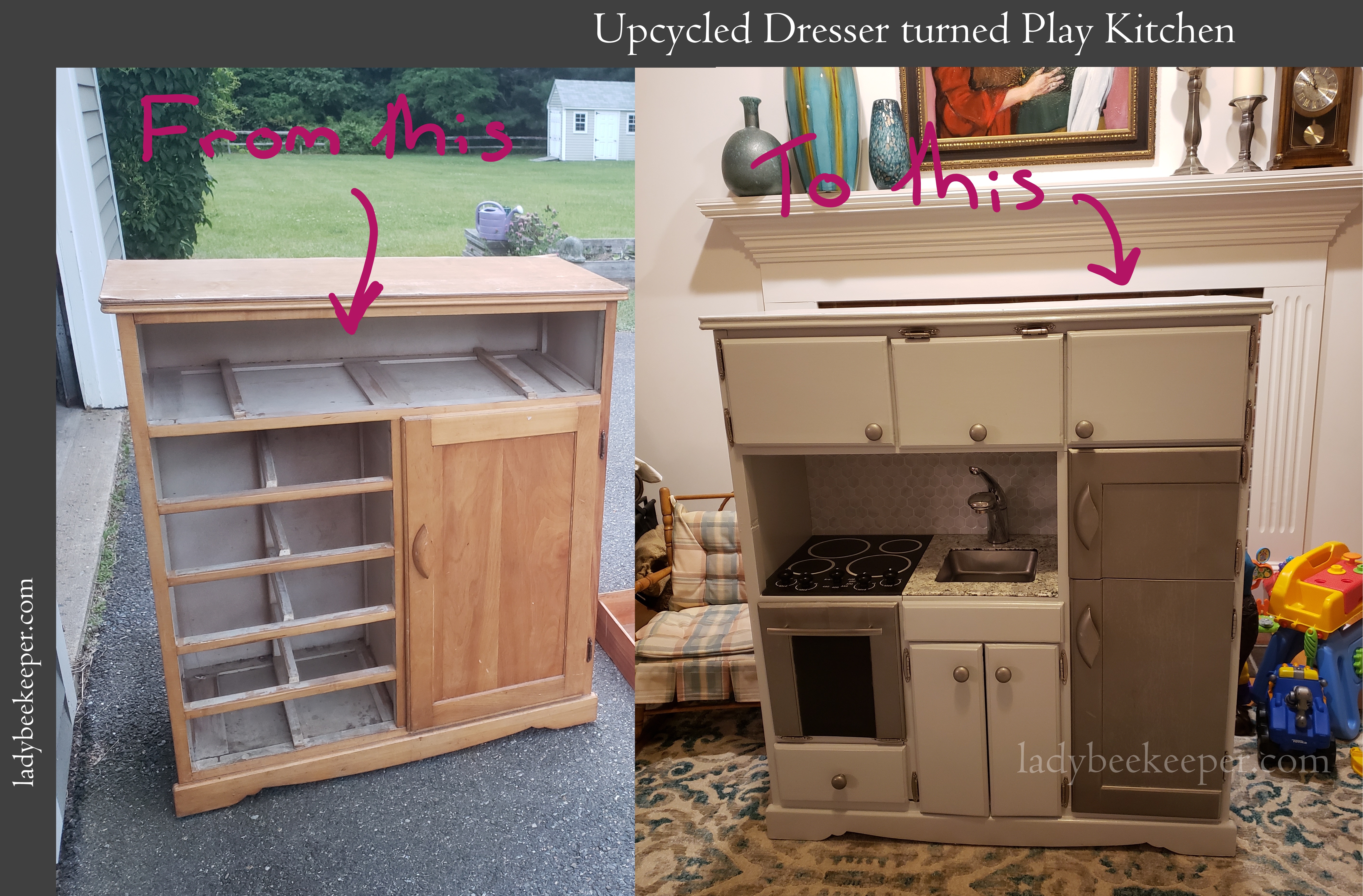 So I started thinking about the play kitchen this summer.  I know it would have been easier to buy one second hand, but I really wanted to make one.  I’ve seen some pretty great homemade play kitchens on the internet.  One day on the way in to work I saw the perfect solid wood dresser sitting on the side of the road.  I pulled over, took all the drawers out, put them in my car and then realized I couldn’t fit the rest of the dresser with Julius’ car seat in there (and he was in the car seat).  So I took everything out of the car and put it back on the side of the road discouraged.  Later that day, Will was returning from an errand and i asked him to pick up the dresser for me if it was still there.  It was!  This was June 14th. 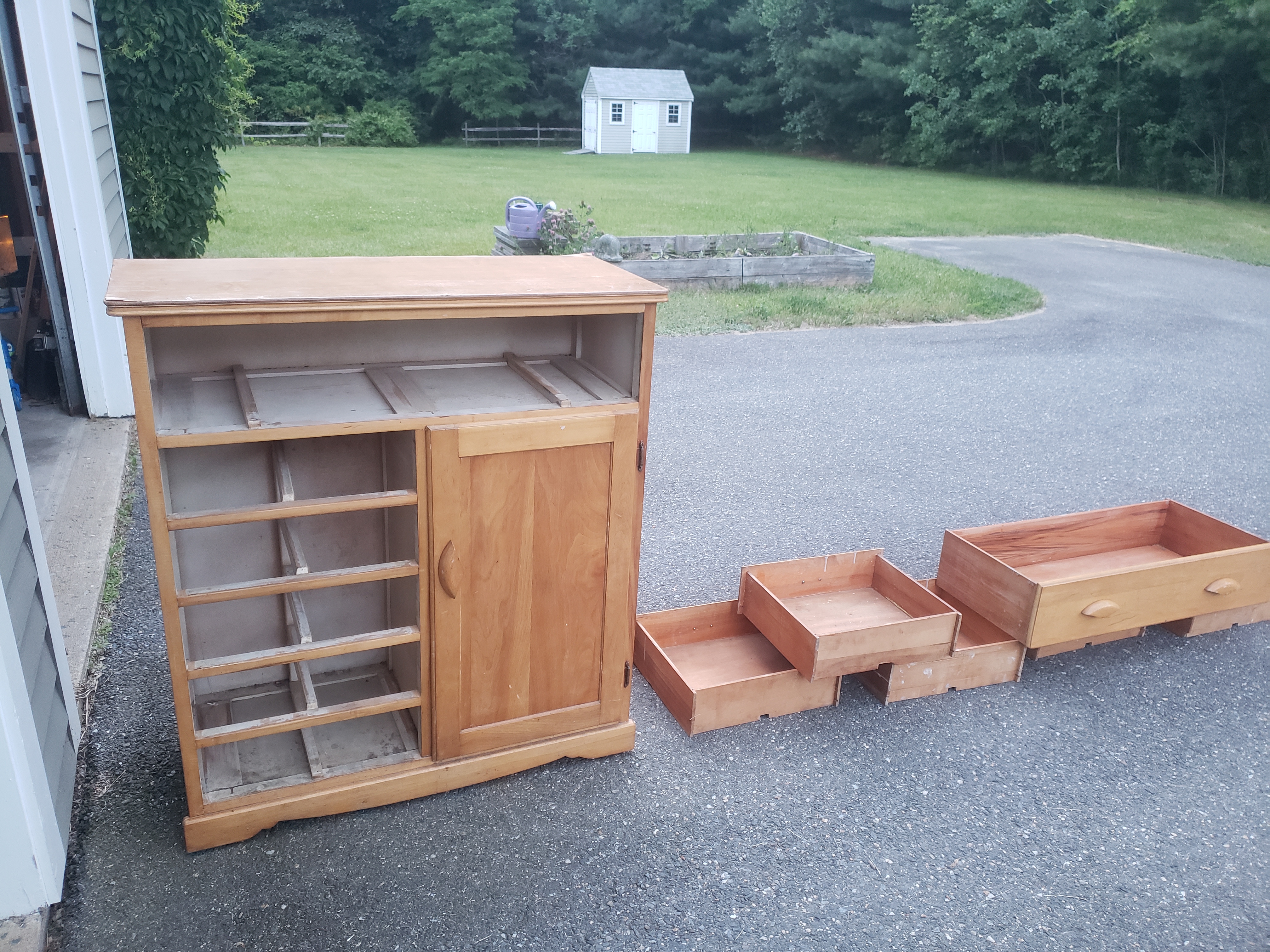 Dresser soon to be a play kitchen…

Fast forward to September 18th.  I finally was sick of seeing the dresser sitting in our garage, and realized that this project could potentially take me a long time.  I finally dragged the entire thing down to the basement and started disassembling it.

Initially I had gotten the dresser thinking that it would work perfectly to have an oven on the left and a fridge on the right.  Unfortunately I asked Will if he thought it needed a sink (without telling him that would be 300% more work) and he said “definitely).  So I decided to split the dresser into thirds, instead of halves.  This meant I needed to cut down the door on the right hand size and move the partition almost a foot.  I’d also need to somehow divide the now larger left side in half into an oven and sink area.  The top would become cabinets.  Here is the gist of what I needed to do…

I don’t want to bore you with the details of this part, but it took a LONG time.  The dresser was incredibly well made, and didn’t use any screws or anything just clever miters.  I was able to get most of it apart with nothing more than a rubber mallet, but putting it back together was the hard part.  I added braces with scrap wood from portions of the dresser I didn’t need and screwed the refrigerator divider into those to make it stable.  I also extended the oven/sink area top by adding a length of wood from the no longer needed middle shelves and using it as the divider between the two sides and a brace.  I then added the extension of wood on top of this and affixed the other end to the refrigerator divider.  I also cut down and reassembled the bottom-most drawer to make it a shorter width to fit under the oven.  Finally I used more of the scrap wood for the middle shelving and added dividers for drawer-turned-cabinets at the top.  I used lots of wood glue for everything.  This whole part took me 2 weeks working almost every night after work. 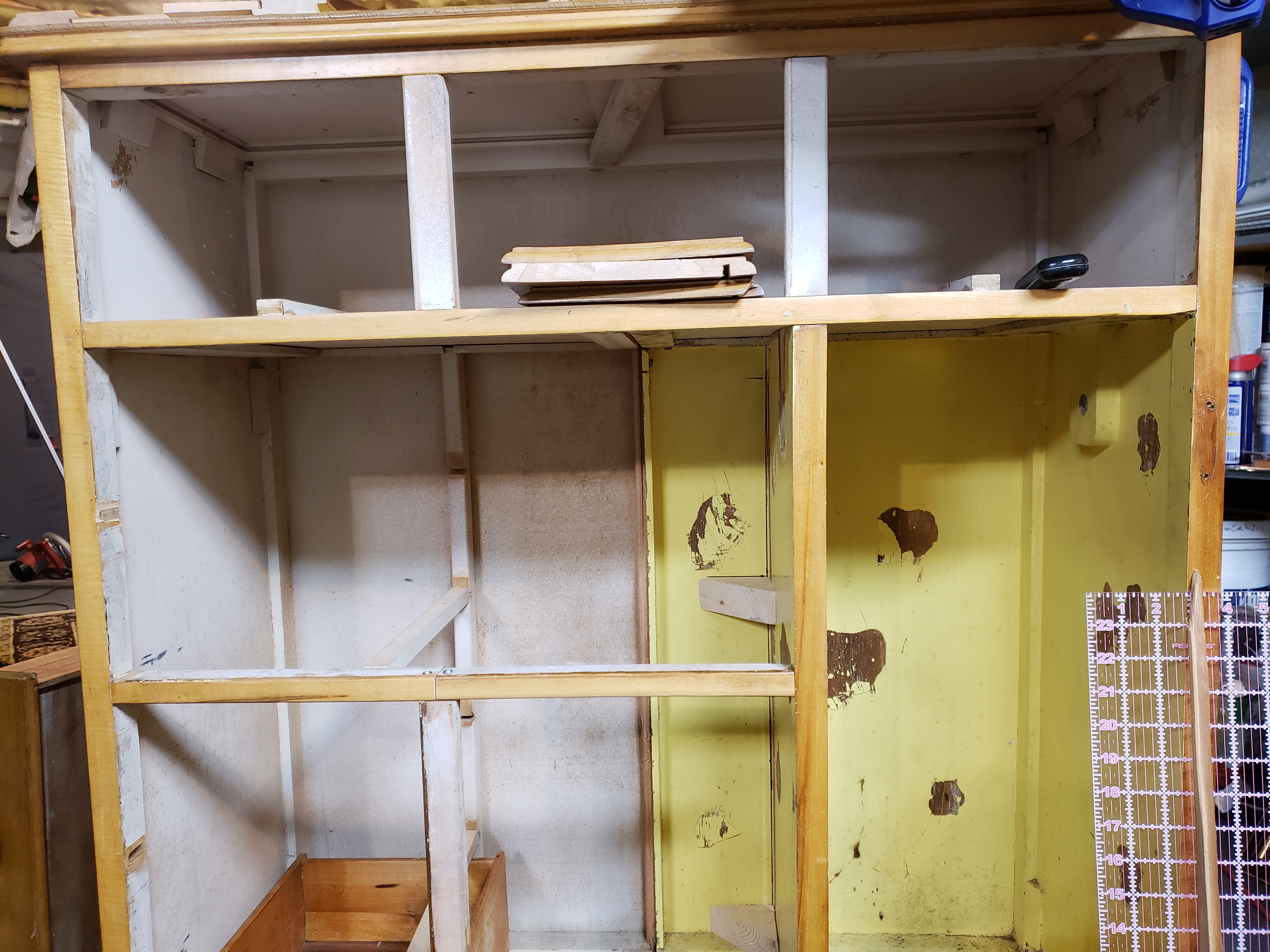 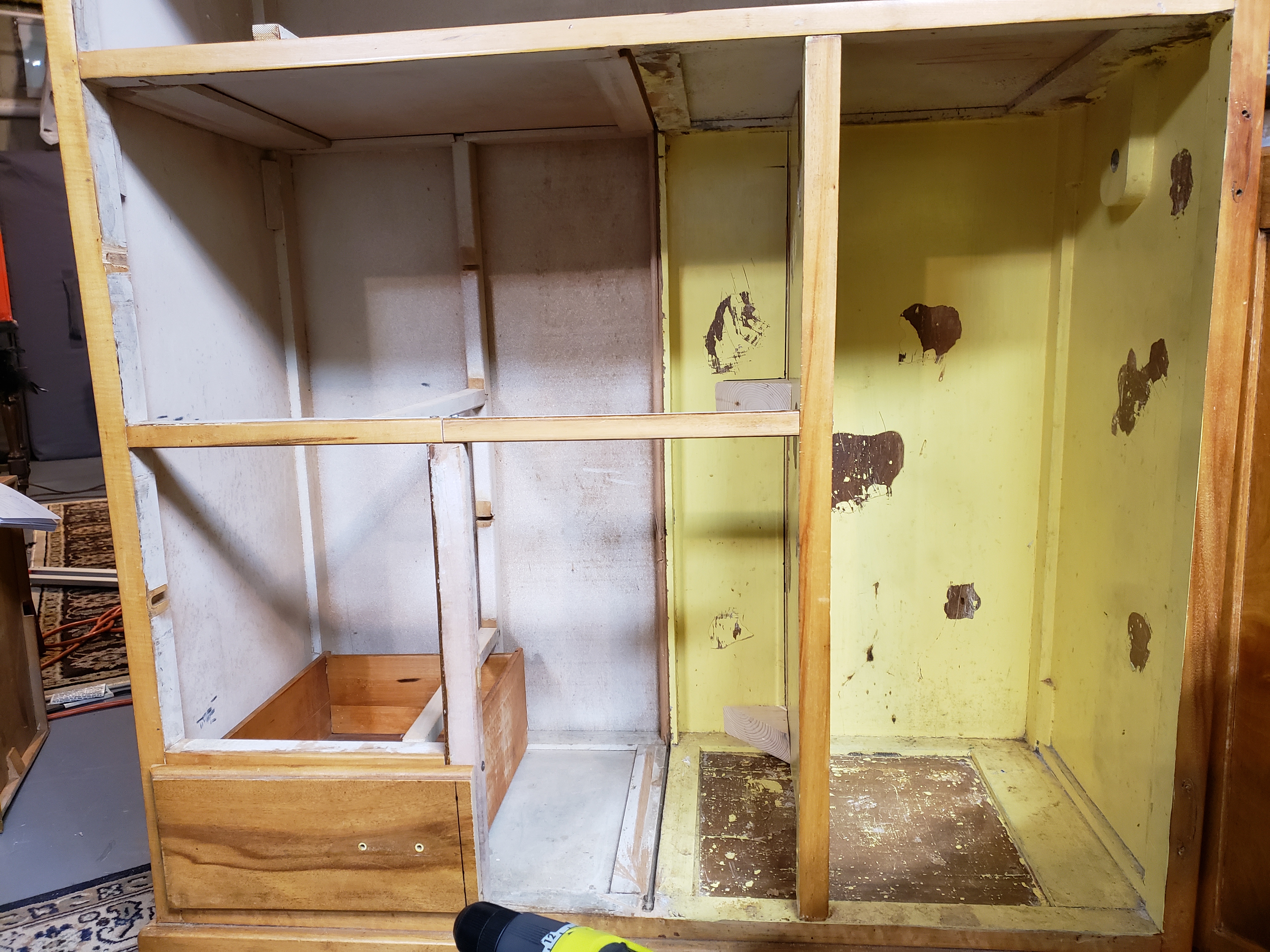 Next I assembled all the cabinet faces, refrigerator doors, and oven door.  I was determined to not have to purchase any wood for this project so I made the oven door by cutting the scrap from the refrigerator door in half and gluing it together.  I think it worked out pretty well and you can barely tell.  It was around this time that I decided I needed a router and the whole router and saw incident occurred. I do have a scar from it, but it’s just below another scar that has never healed in grade school, so I doubt it’s noticeable.  I was able to figure out how to use the router and cut a bunch of drawer faces down to size for the upper cabinets, cabinets under the sink and the drawer face from the drawer under the oven.  I also installed the oven bottom (which is a piece of cheap hardboard I actually did end up purchasing).  I installed them using more scrap wood braces.  I also cut the oven top/counter top down to size and rounded the edge using my router (this was a piece of 1/4″ thick wood that I had lying around from some project I don’t remember). 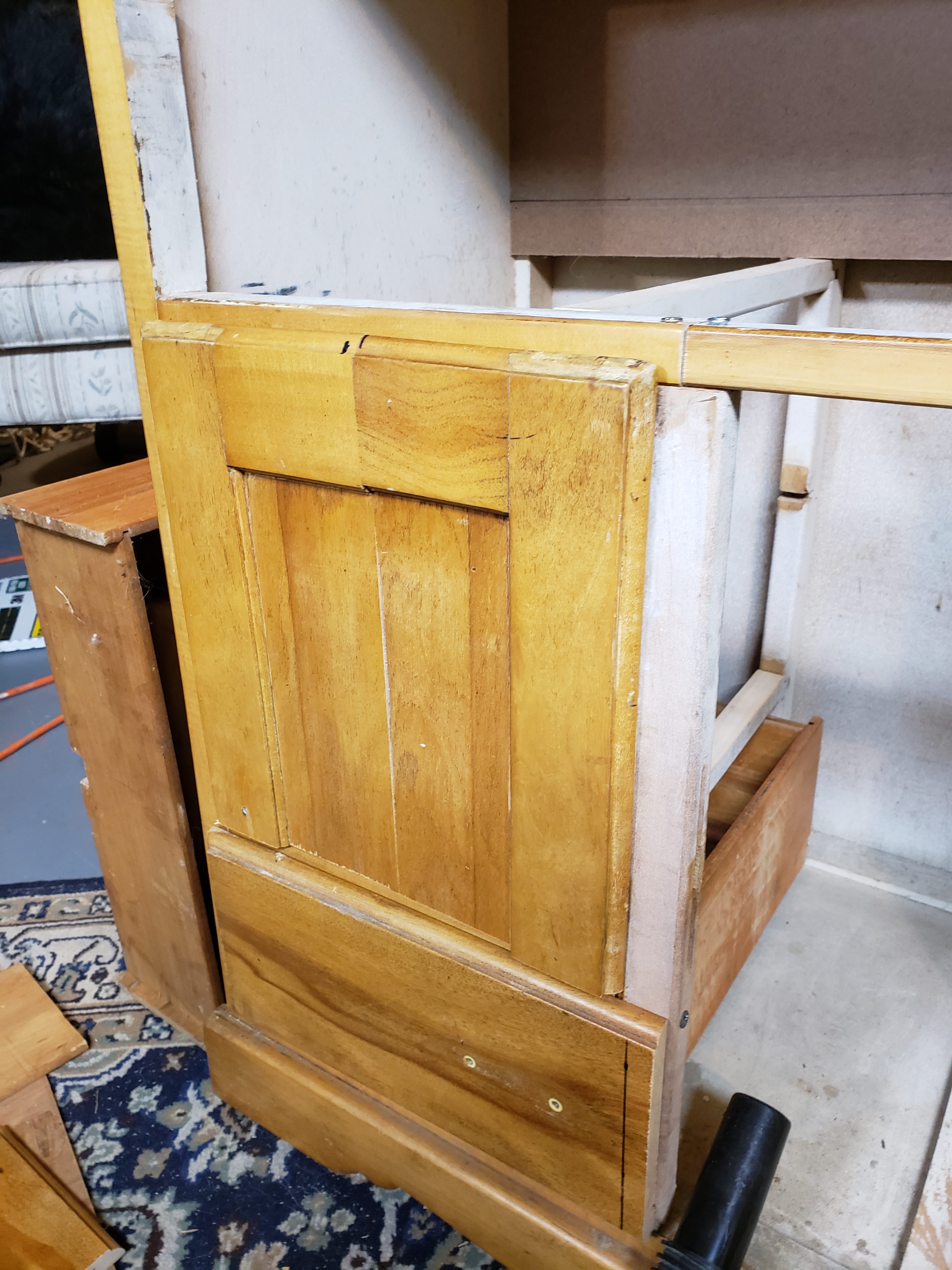 Oven door created from pieces left over from fridge door. 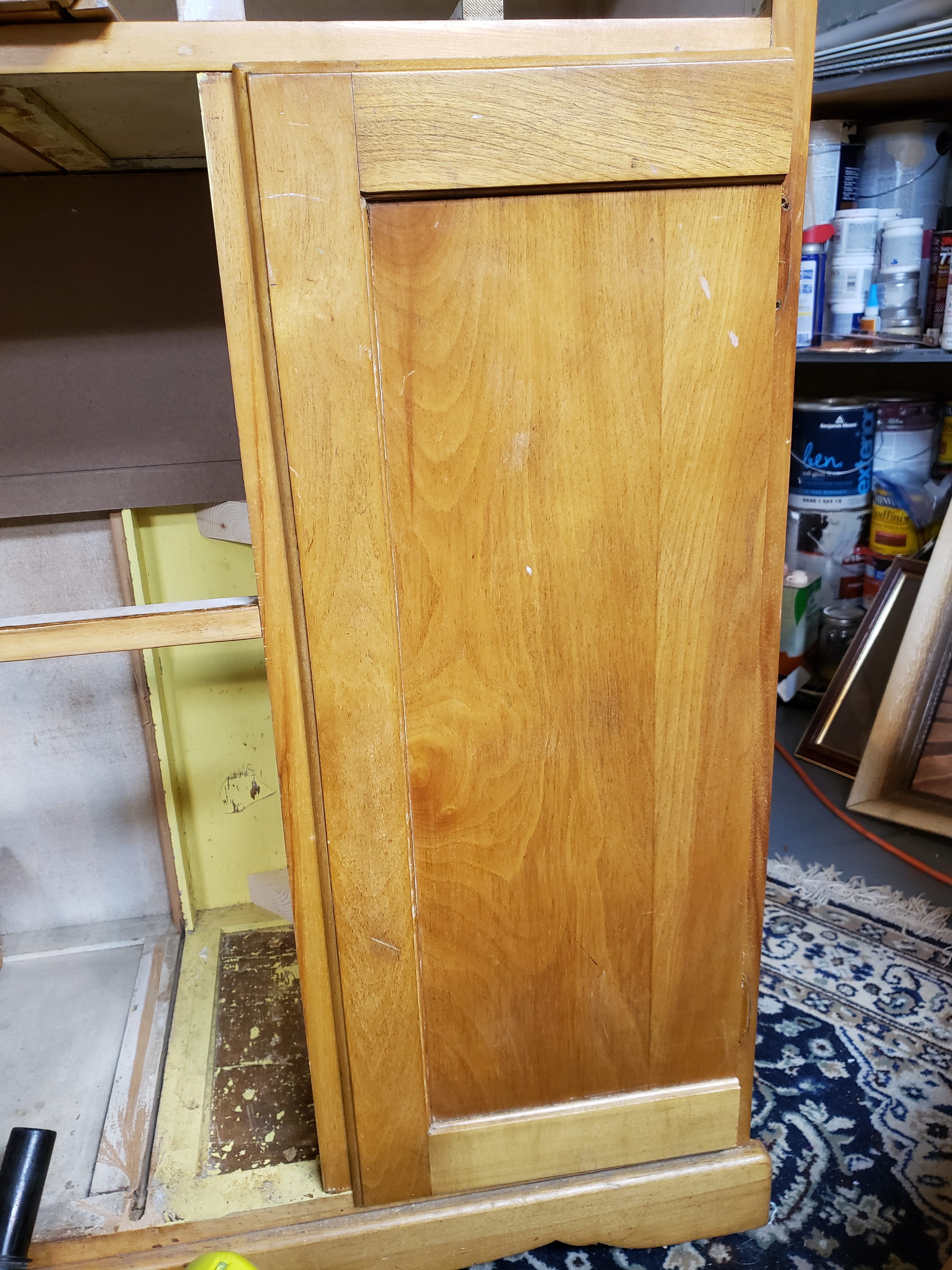 Next I cut out a hole for my sink (a cake pan I’d found at the dollar store).  I used a hole saw to drill holes in each corner then used my bandsaw to cut the rest out.  I sealed up the entryline I had to cut with the bandsaw to get into the inside of the piece with sawdust and wood glue.  It worked great.  I also drilled a hole for where the faucet would fit (I bought a real faucet off craigslist for $15).  I cut a hole using a hole saw and then used my dremel to extend the hole to the exact size I needed so the faucet would fit snuggly.  At this point I was also worried that the faucet would be too heavy for my 1/4″ wood countertop, so using scrap wood I built a beefy brace to sit underneath the countertop and surround the faucet.  I then sanded the heck out of everything at this point. 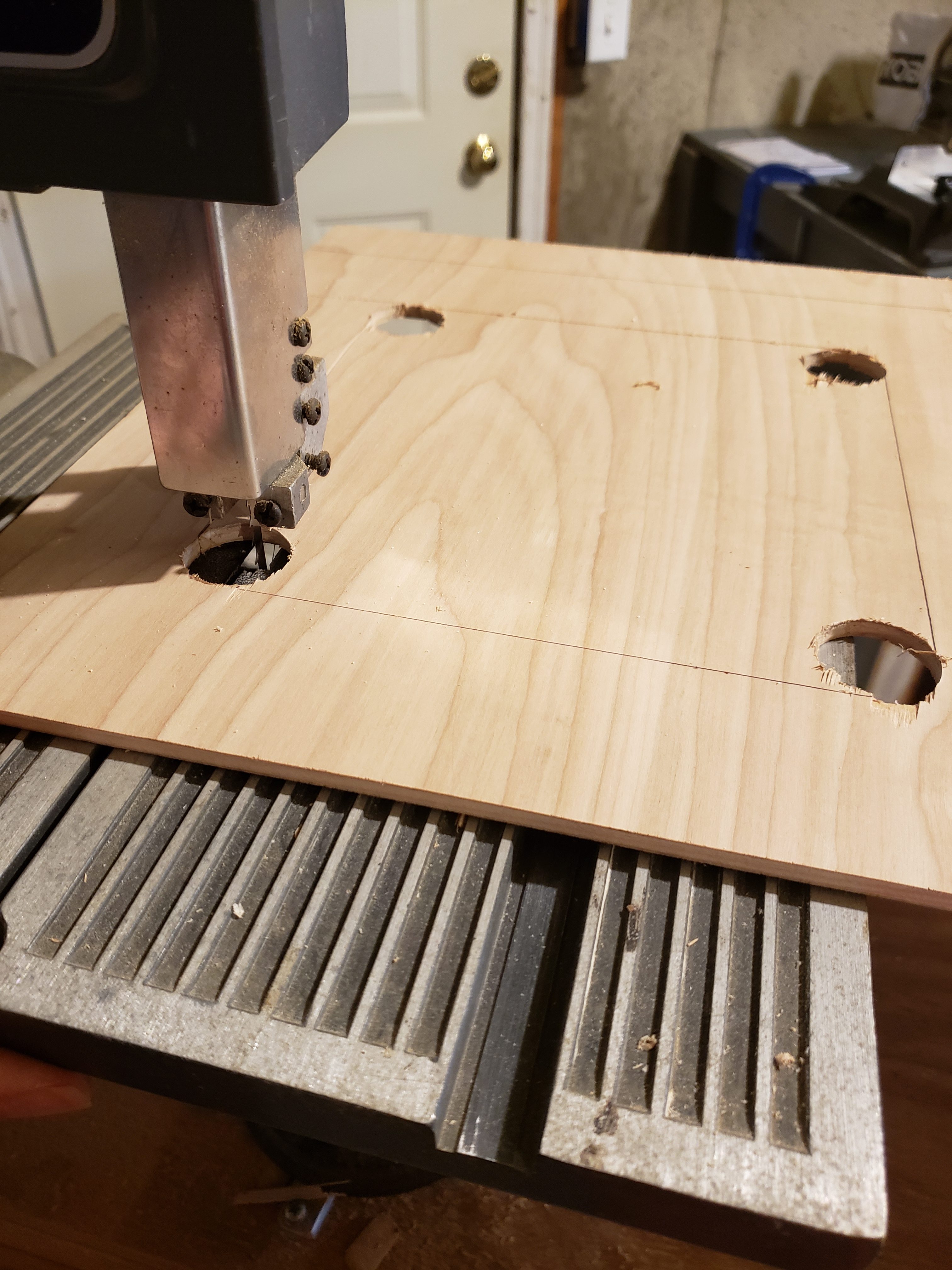 Cutting out the hole for the sink basin. 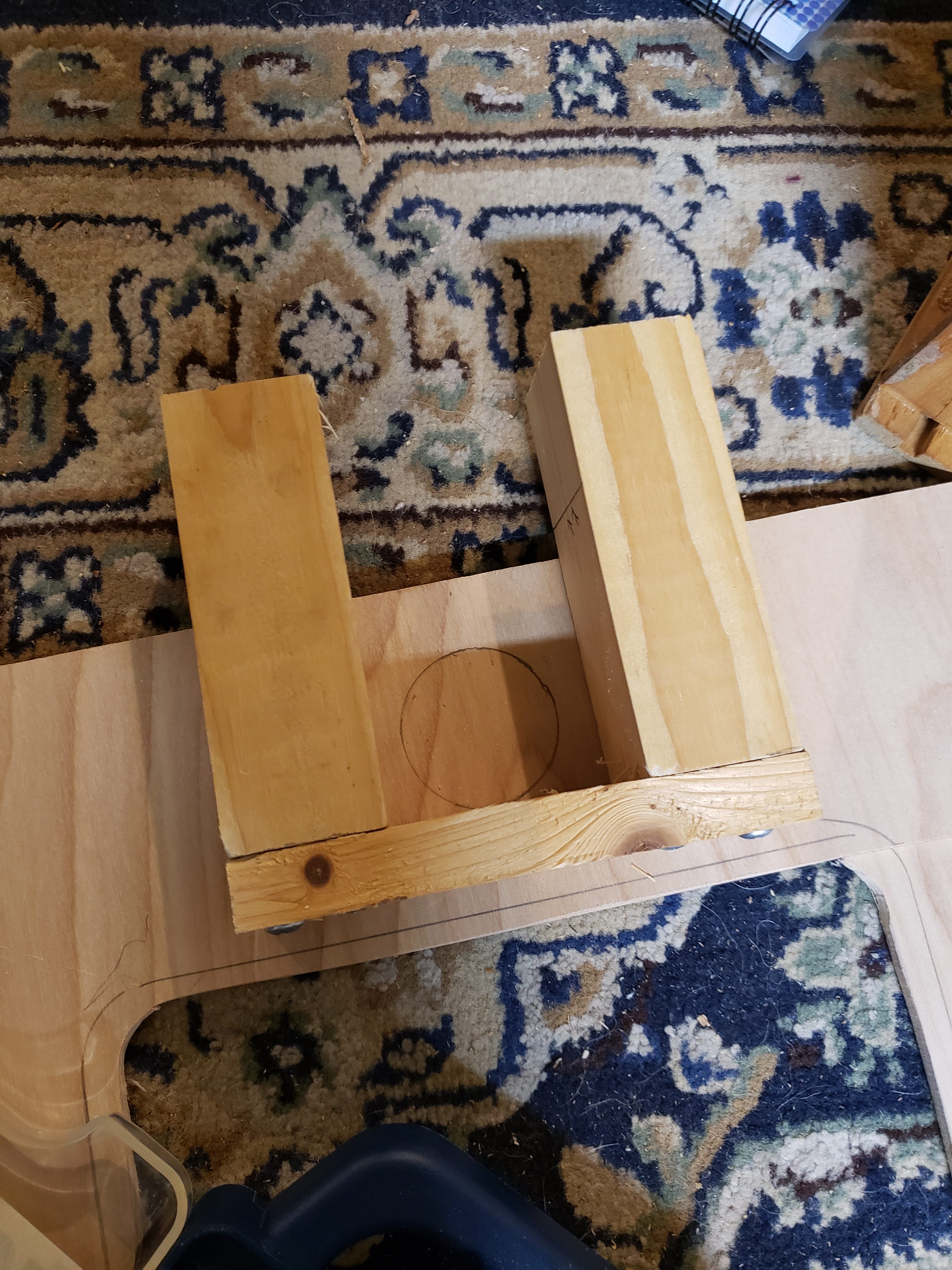 Brace for the heavy faucet 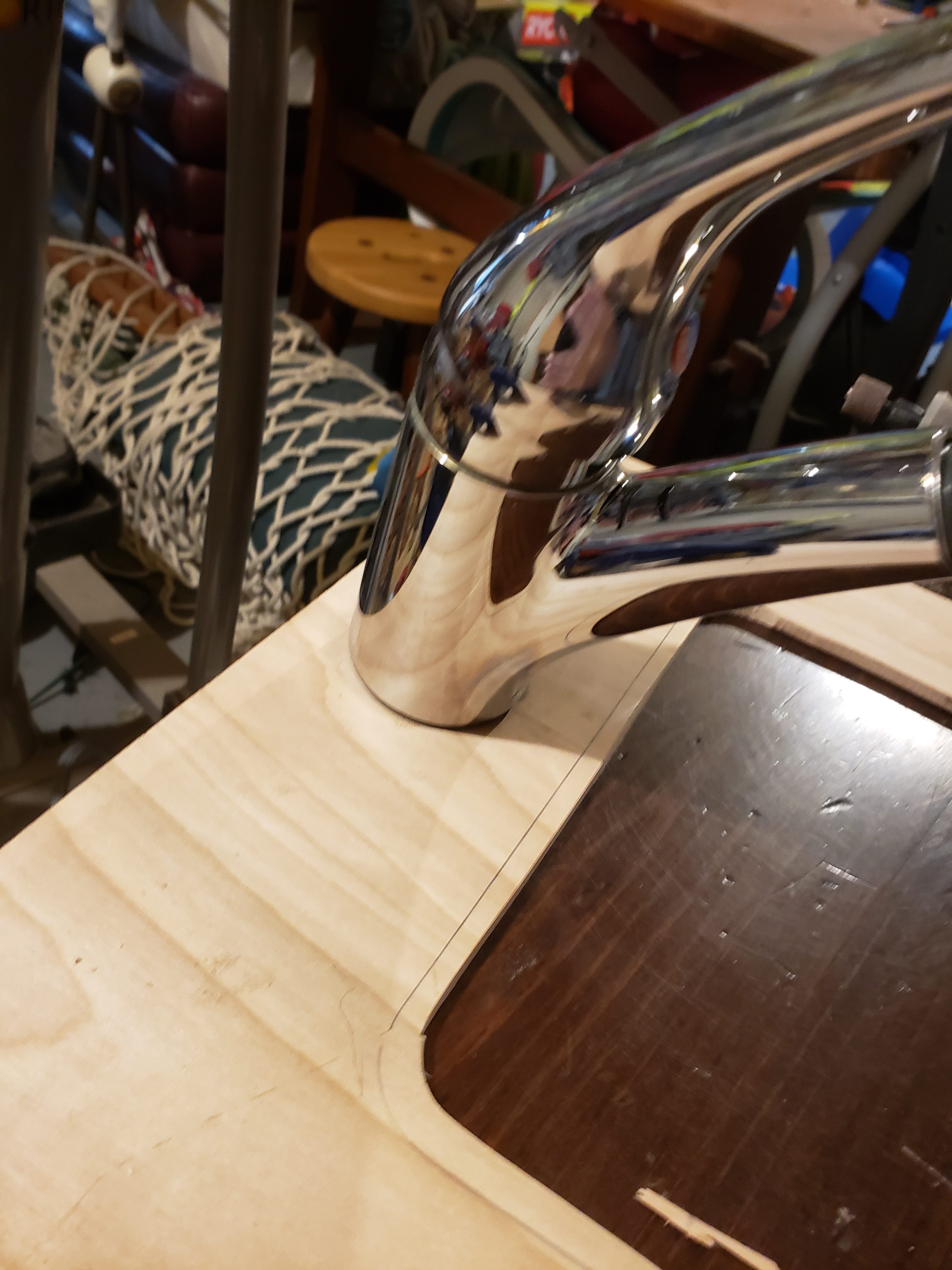 Here is where I started painting.  I painted the entire countertop/stove top black.  After it dried I divided it in half using painter’s tape and started sponge painting the part over the sink in random patterns (turning the sponge frequently).  I did it using tan, then white, then a grey/purple I mixed myself.  I made sure to also apply paint in the lip above where the sink basin would sit.  I personally think my fake granite came out pretty great. 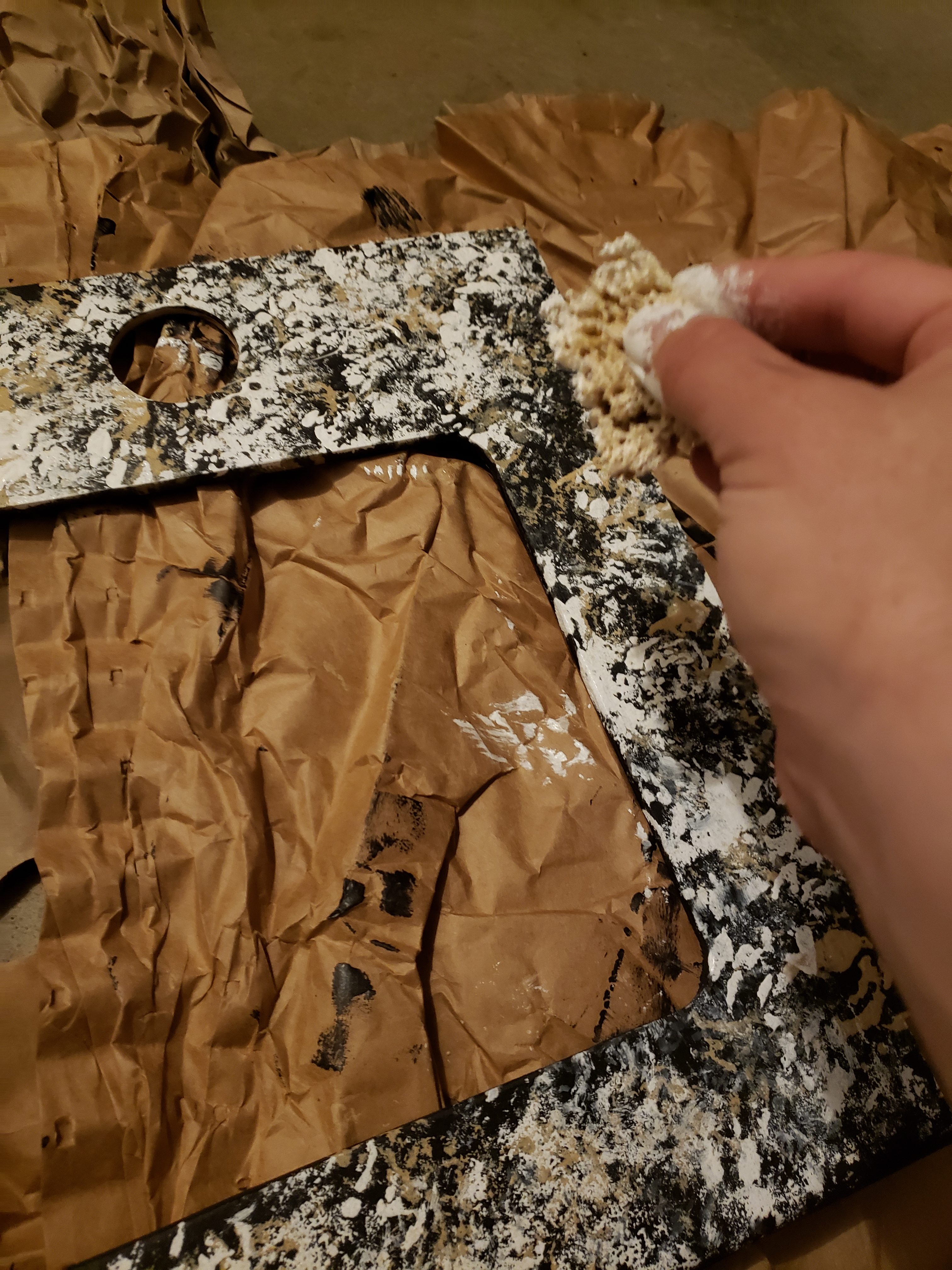 Using a sponge to dab on fake granite. 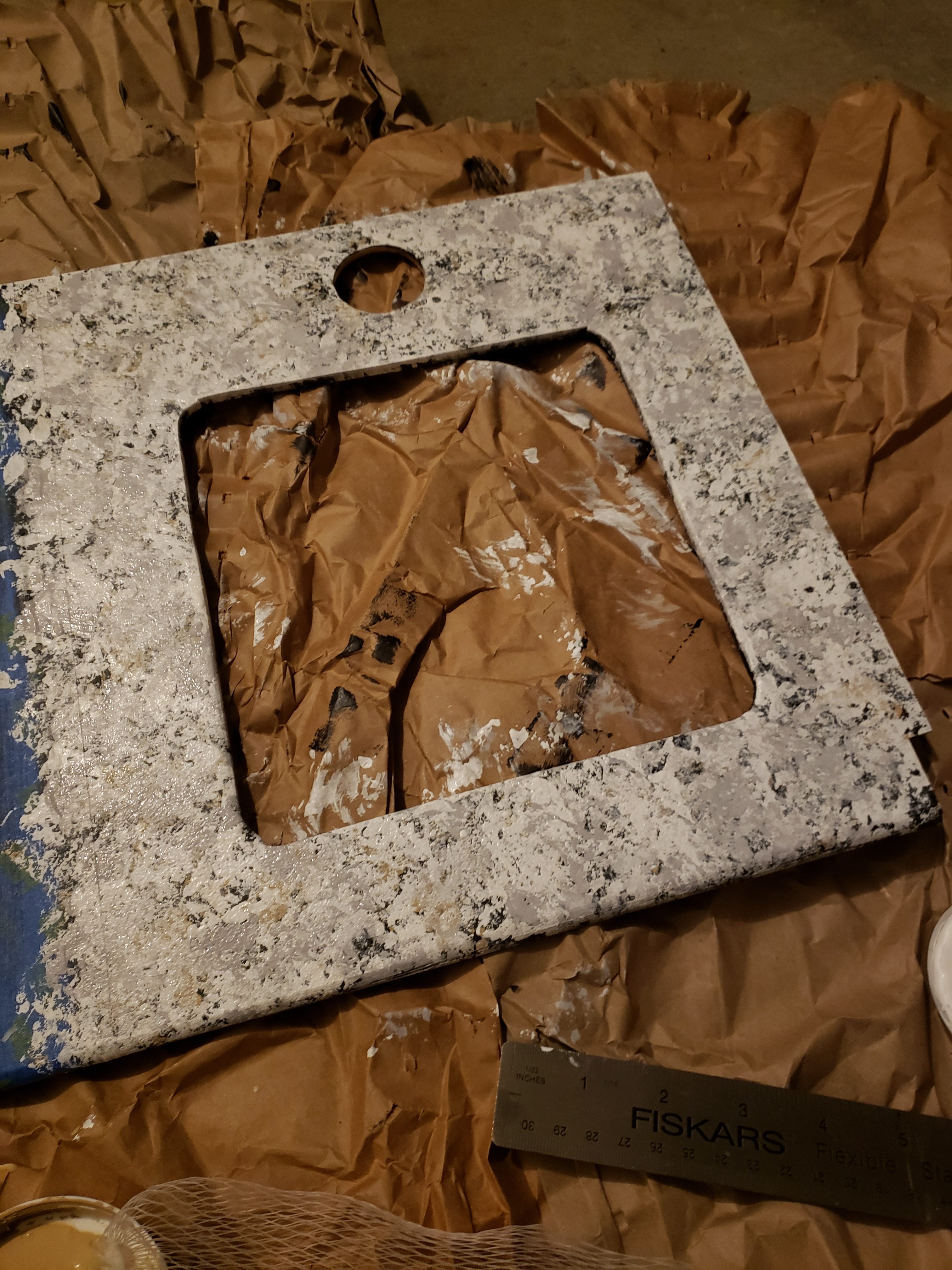 For the stove, I created a template on my Cricut (you can find it here) and cut it out using stick-on vinyl.  This I stuck to the stove top half of the counter and painted it white.  I touched it up a bit afterwards, but overall this saved me a lot of time and it came out great.  When the entire countertop was dry I sealed all of it using polyurethane.  After the countertop dried I glued the “sink basin” to the counter with E6000. 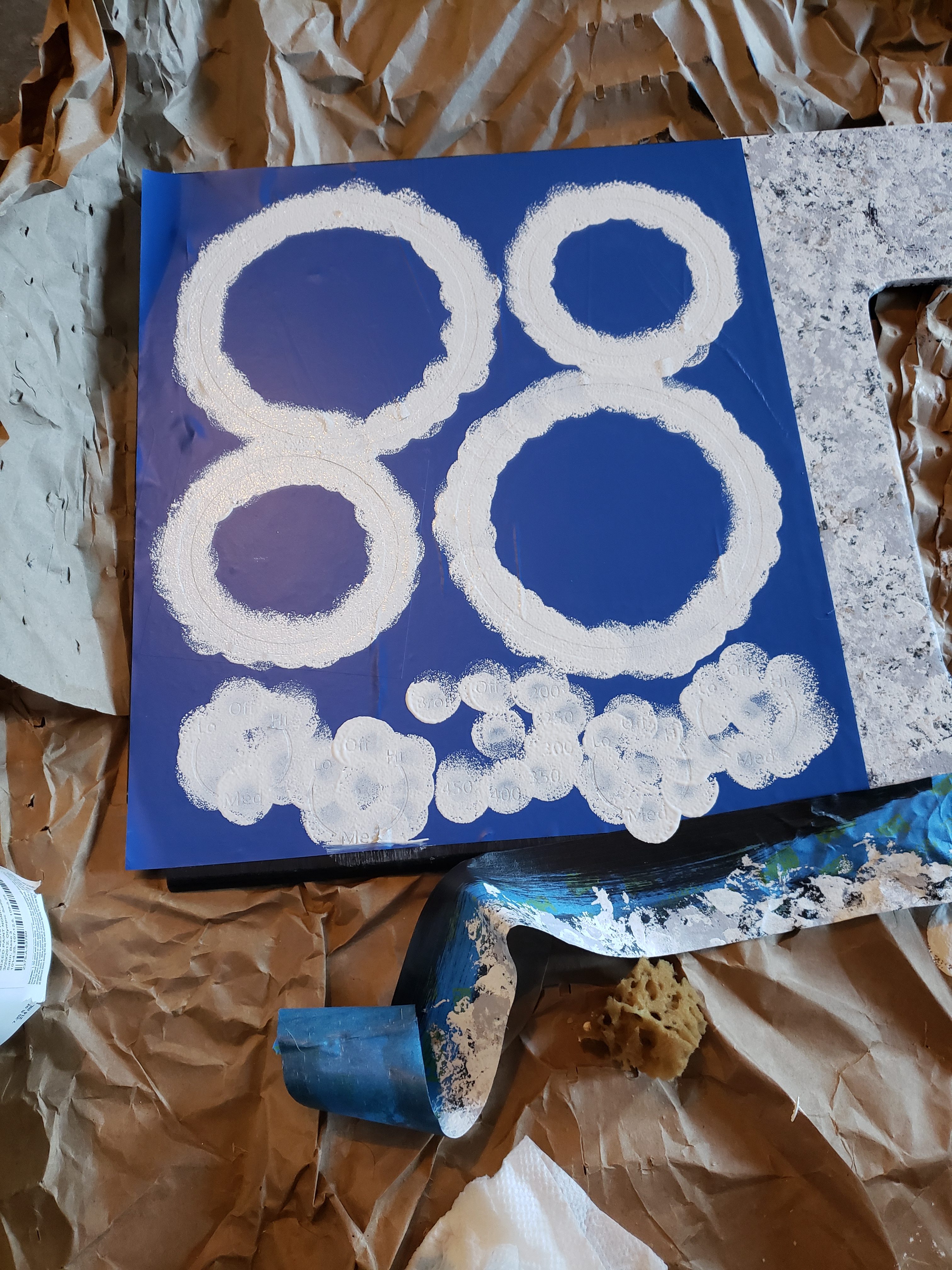 Using Cricut stencil to paint the stovetop on. 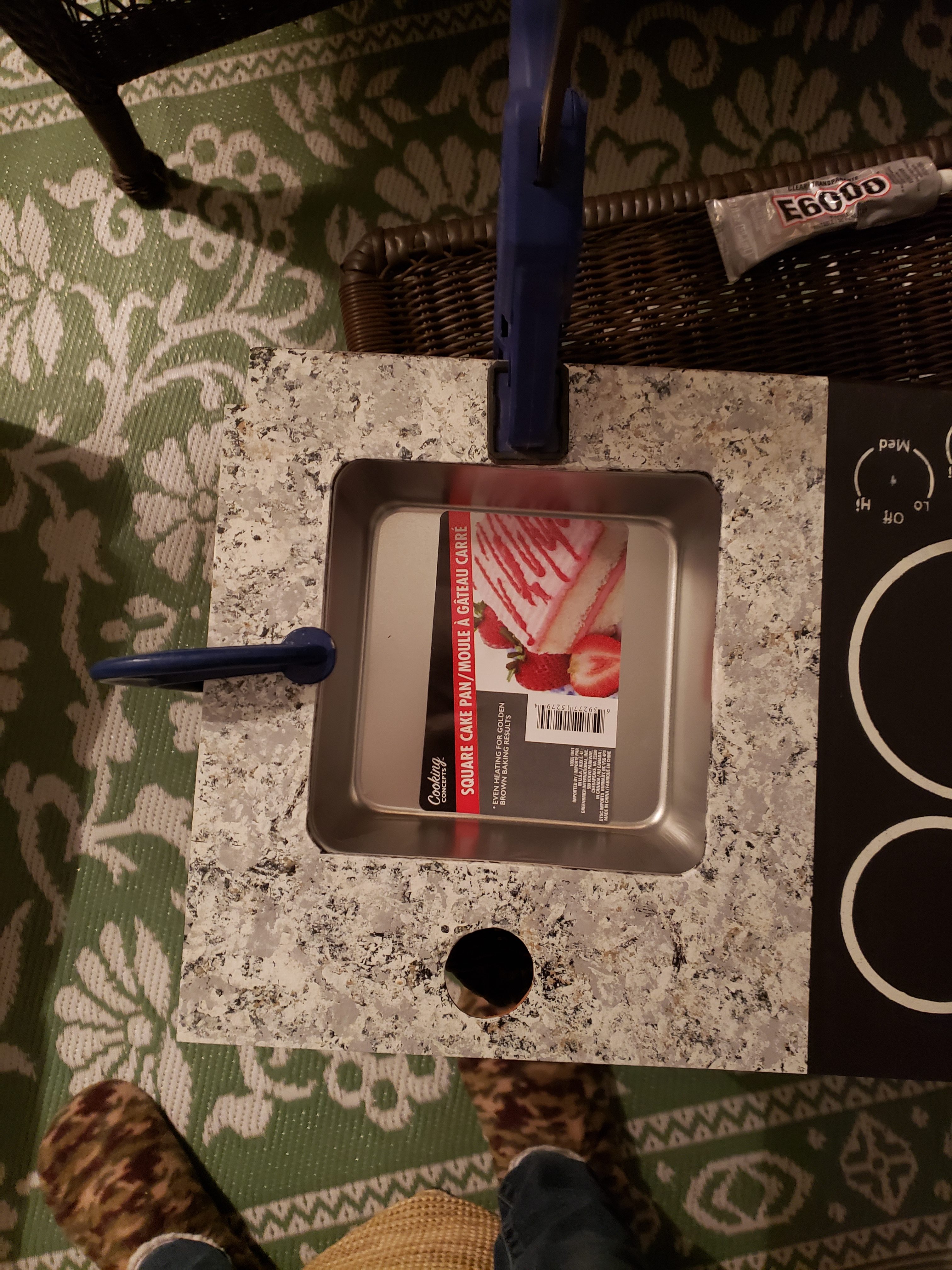 Gluing the sink basin to the countertop.

For the last minute additions before I painted everything I installed the fridge shelves by gluing braces for where the division between fridge and freezer, and fridge shelf would sit.  I cut the shelves from the bottom of the drawers that I wasn’t using.  For the division between where fridge and freezer would sit I used one of the nice mitered pieces from one of the drawer faces and cut it down so it would look a bit fancier.  Since I had this in place I finally cut the fridge door to form the freezer door and fridge door.   I also installed all the braces for the countertop, and cut a piece of hardboard for the backsplash.  And here is when I finally installed the oven side. 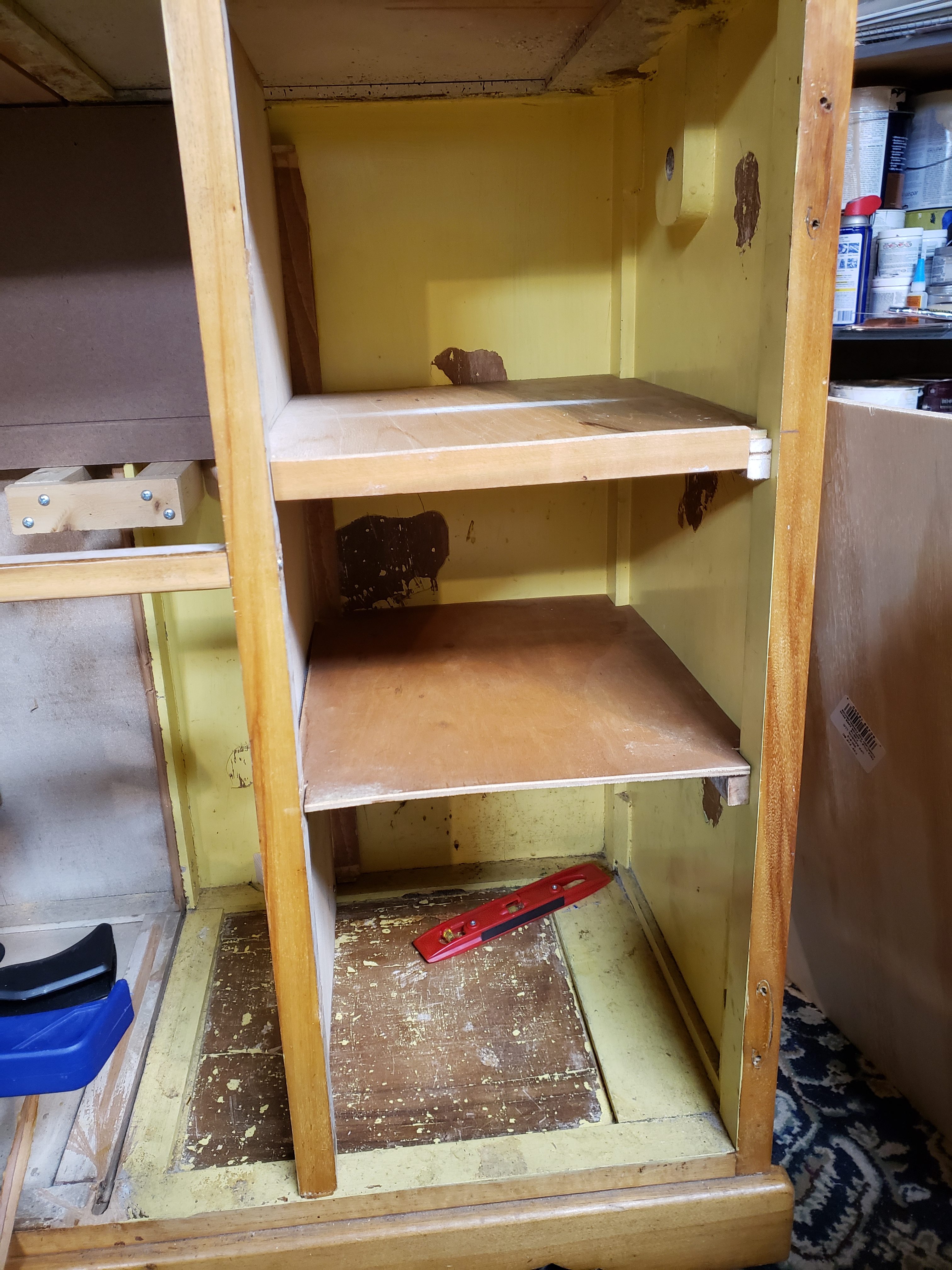 Installing shelves for fridge and division for freezer. 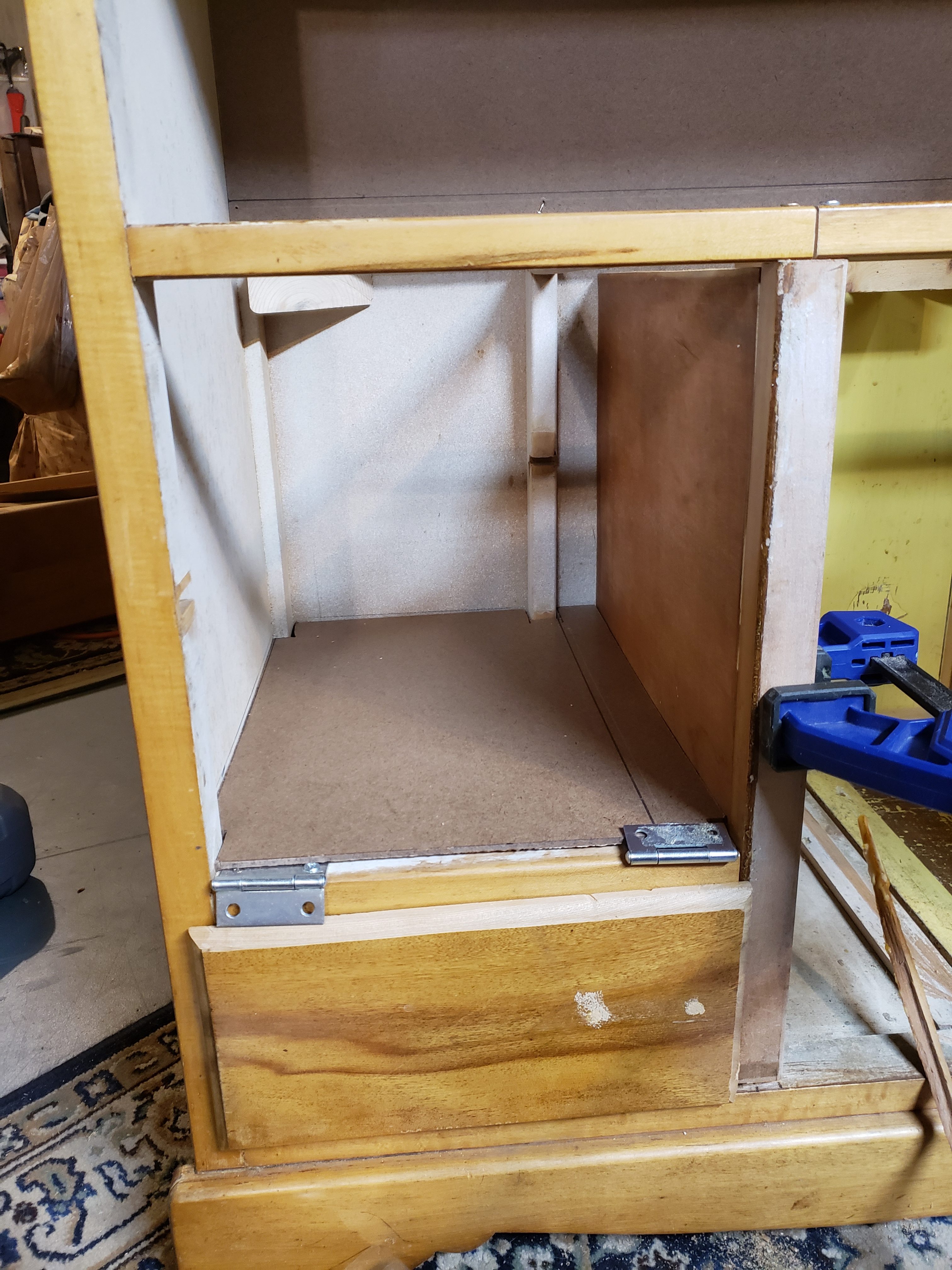 At this point I painted EVERYYTHING.  The inside of the fridge I painted white, and the inside of the stove I painted black.  The stove door and fridge doors I painted with this stainless steel spray paint Roger had given to me long ago (he couldn’t remember why he had it when I told him this).  I spray painted the cabinet knobs silver (ugly white porcelain things that were the first thing I swapped out in my kitchen when we moved in) and the cabinet knobs I used for the oven I spray painted black.  Everything else I painted in this grey cabinet paint which was far more expensive than I should have paid ($25 for a quart!)  I was sort of testing the paint for my kitchen though.  The coverage is amazing – so it may be worth it someday. 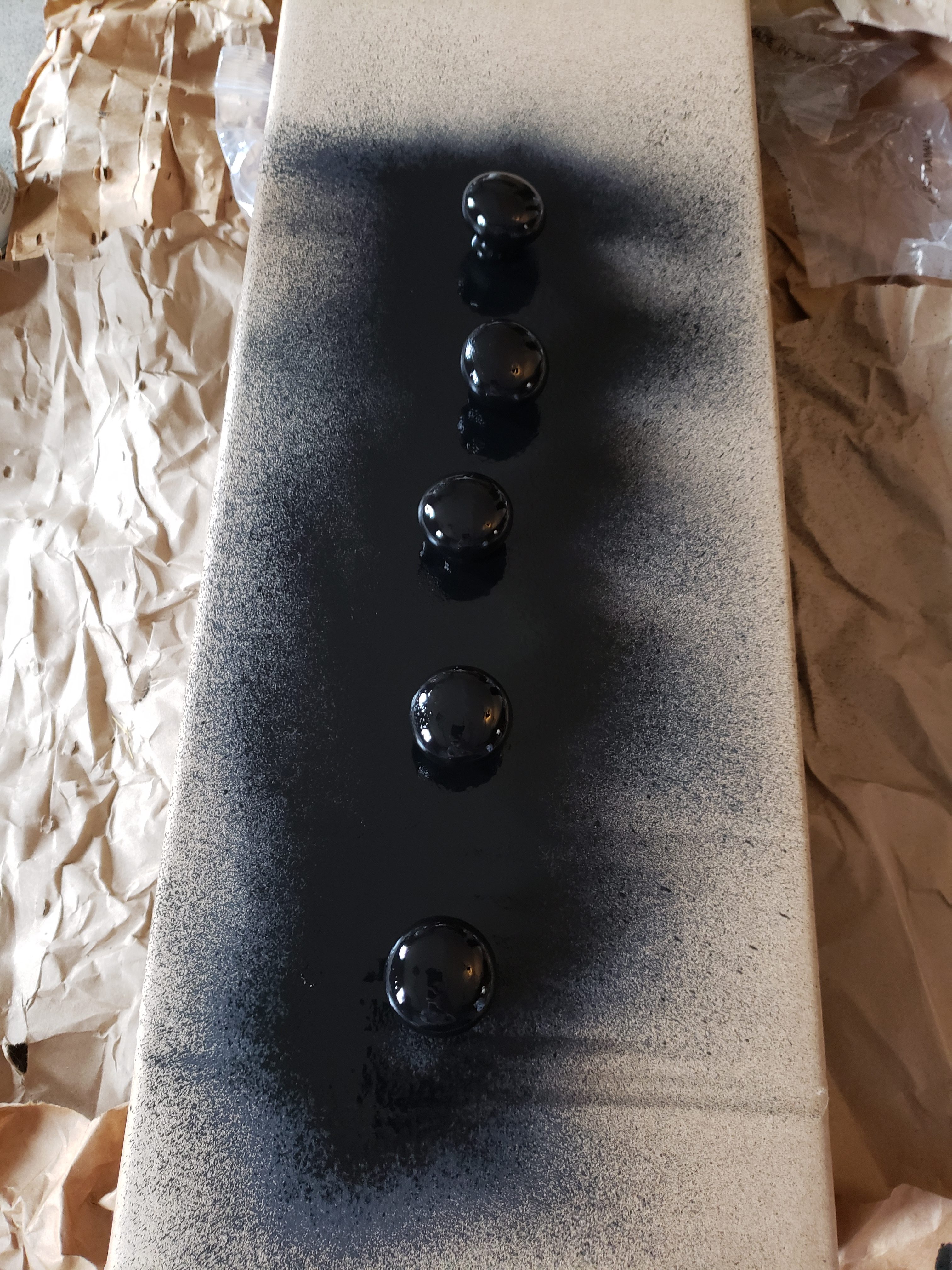 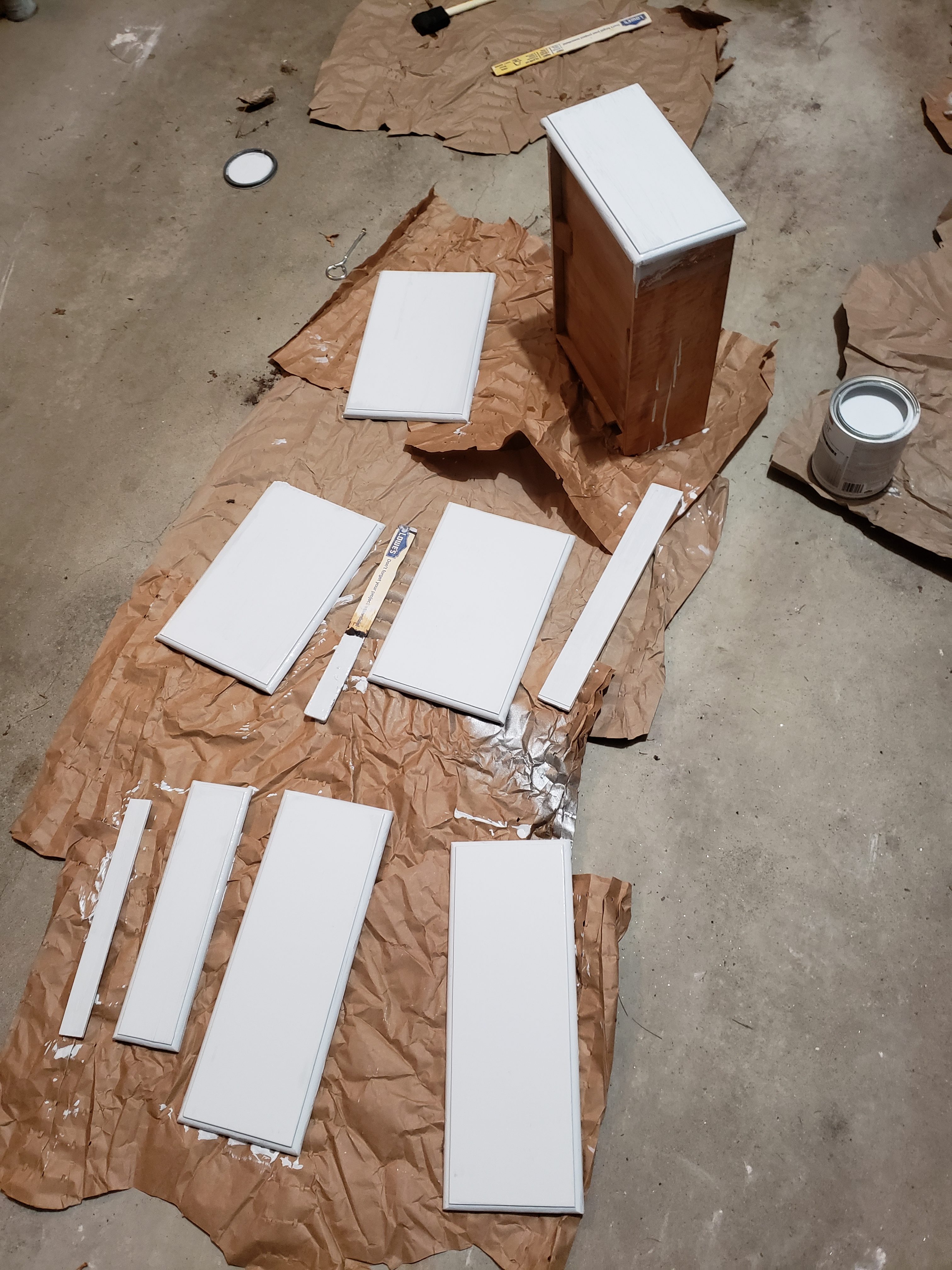 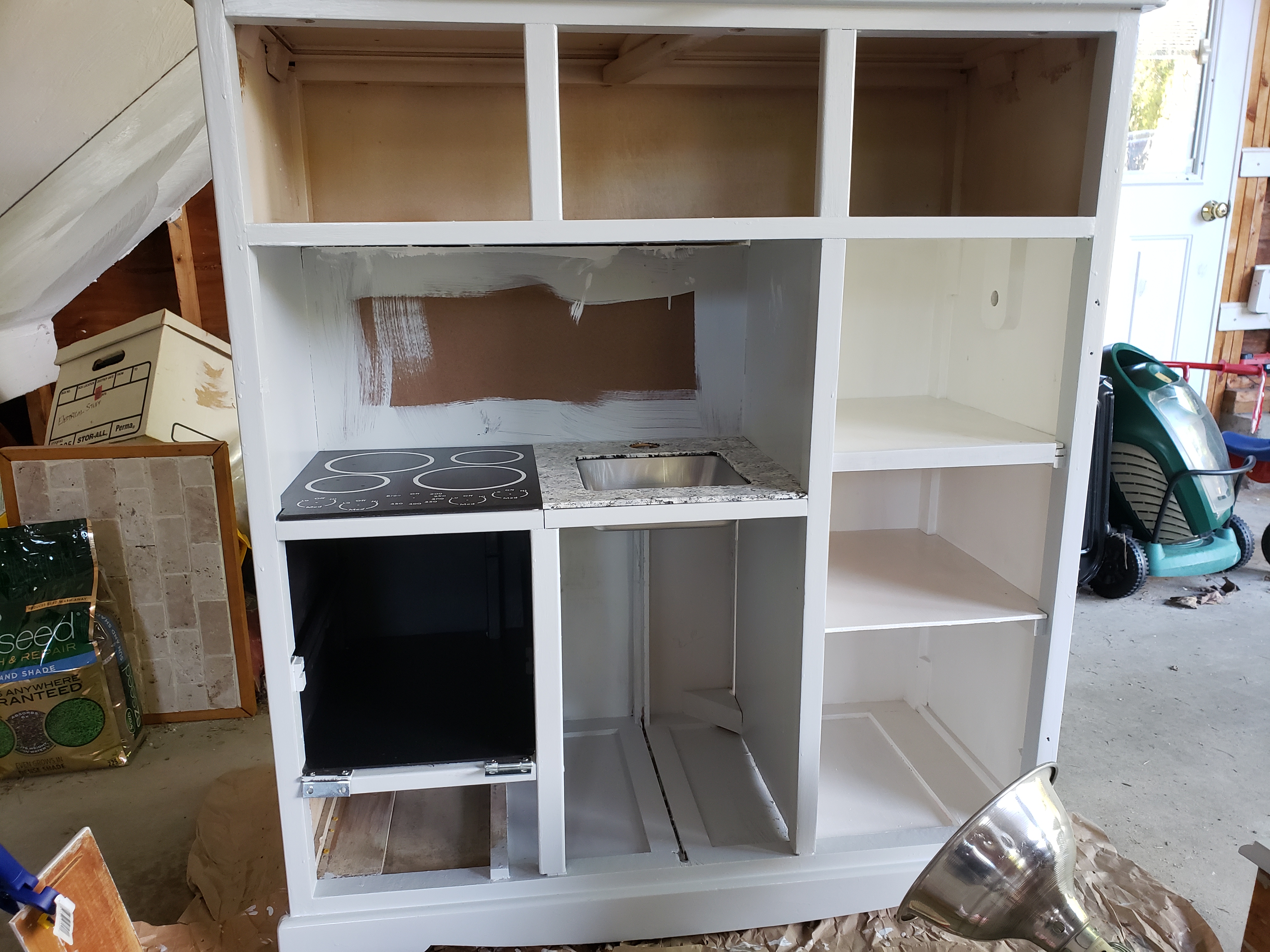 After everything dried I installed the countertop/stove top and put in a backsplash using this super cool sticky backsplash material.  (Also probably not worth paying for this, but looks pretty neat).  I then installed all the cabinets using hinges I bought (and 2 that I had from the project already).  Next I installed magnetic catches for the oven and fridge doors so they’d stay shut nicely.  Then I drilled holes for the knobs and installed those.  I installed the faucet and an oven rack I’d made from a cookie rack I got at Dollar Tree.  The finishing touch was to add a puck light I’d gotten from the Dollar Tree over the countertop. 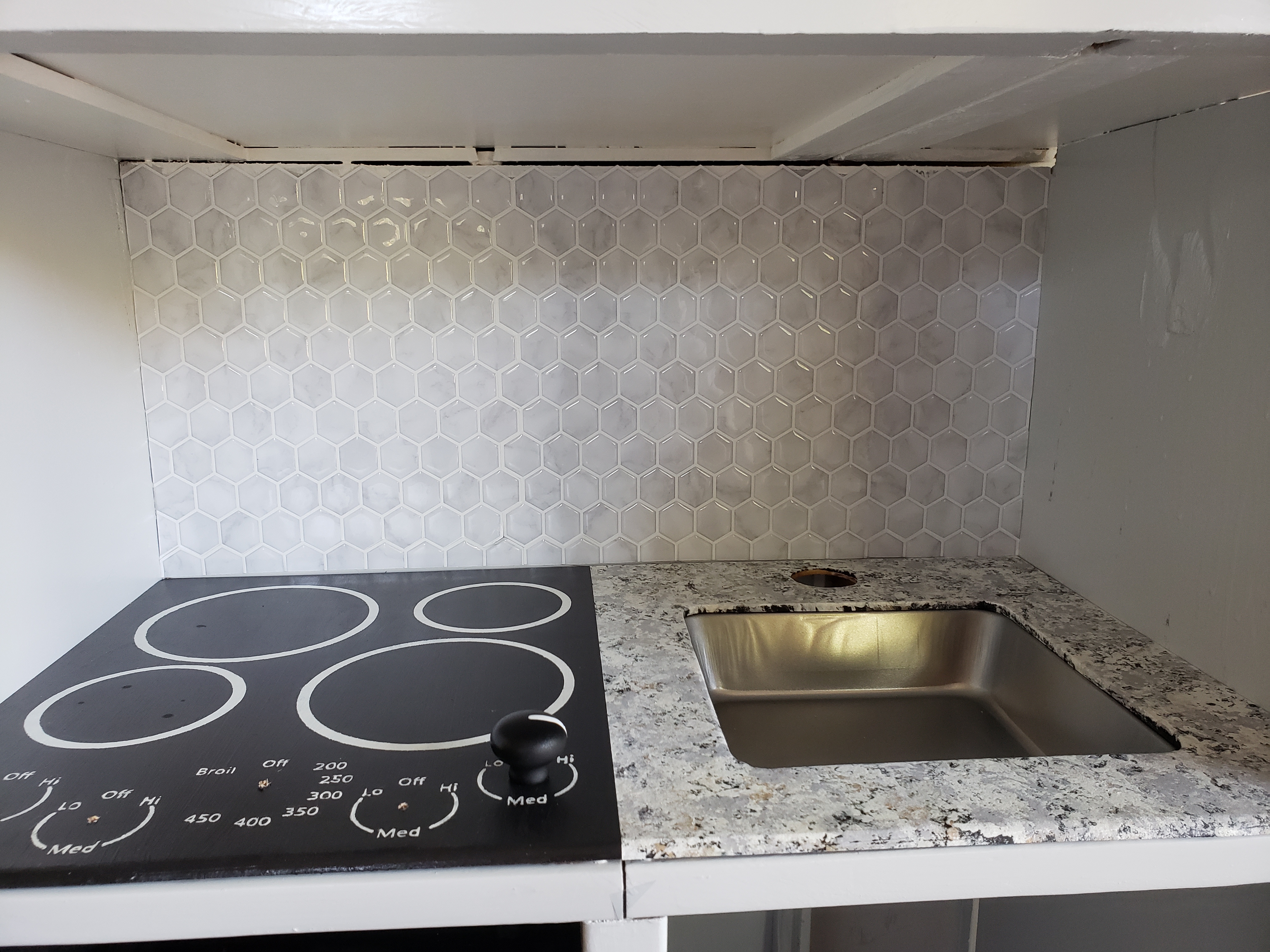 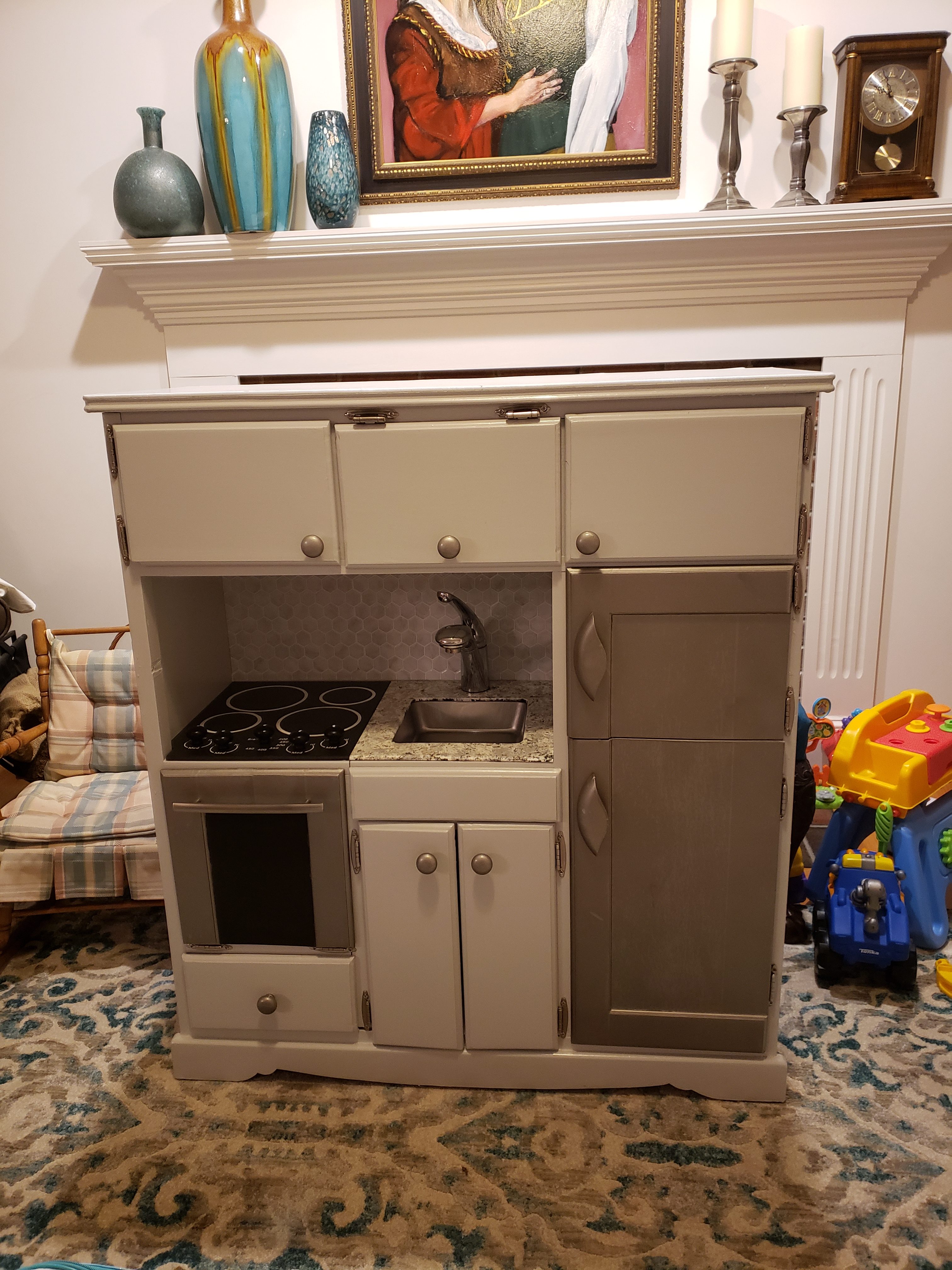 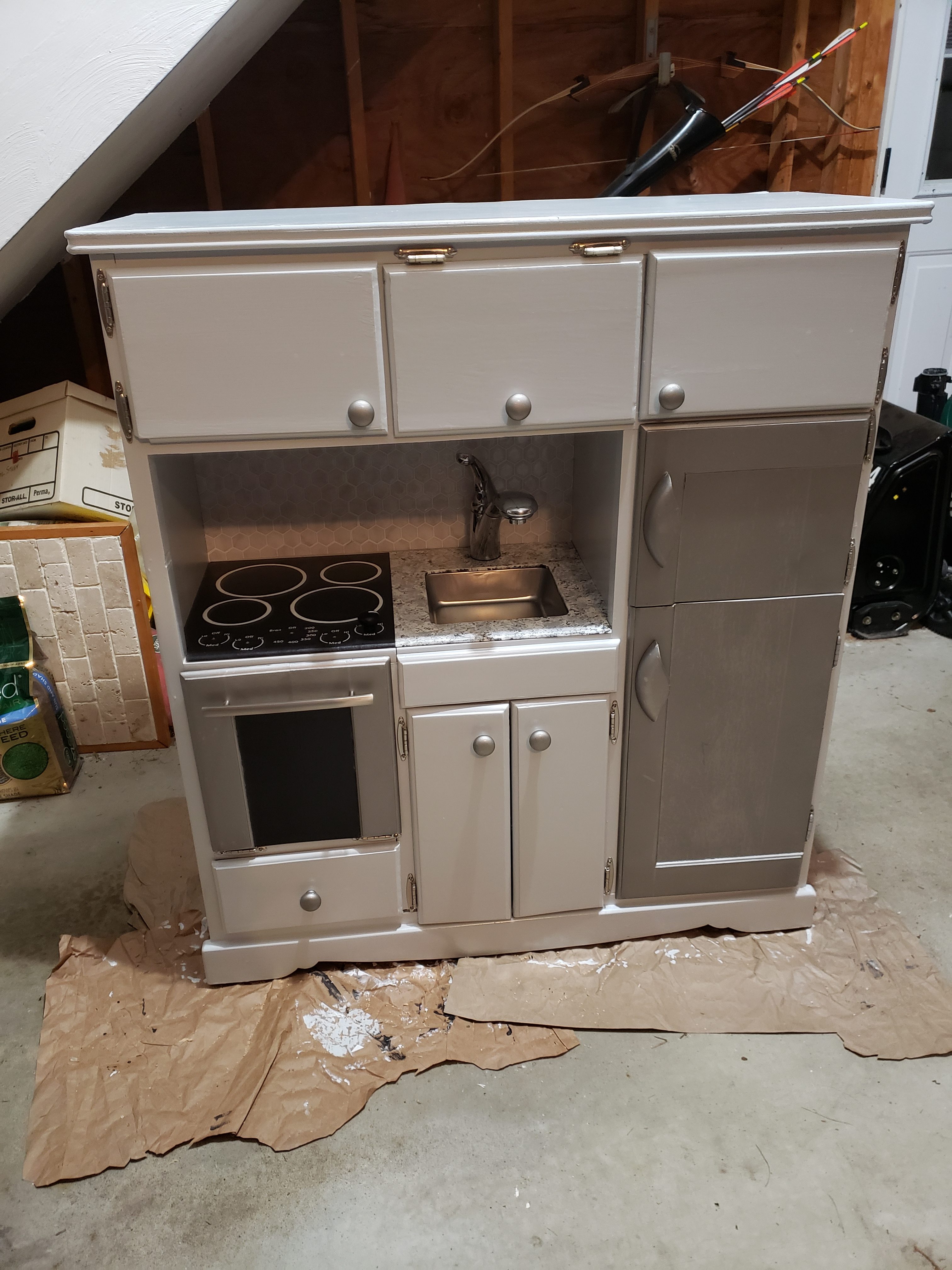 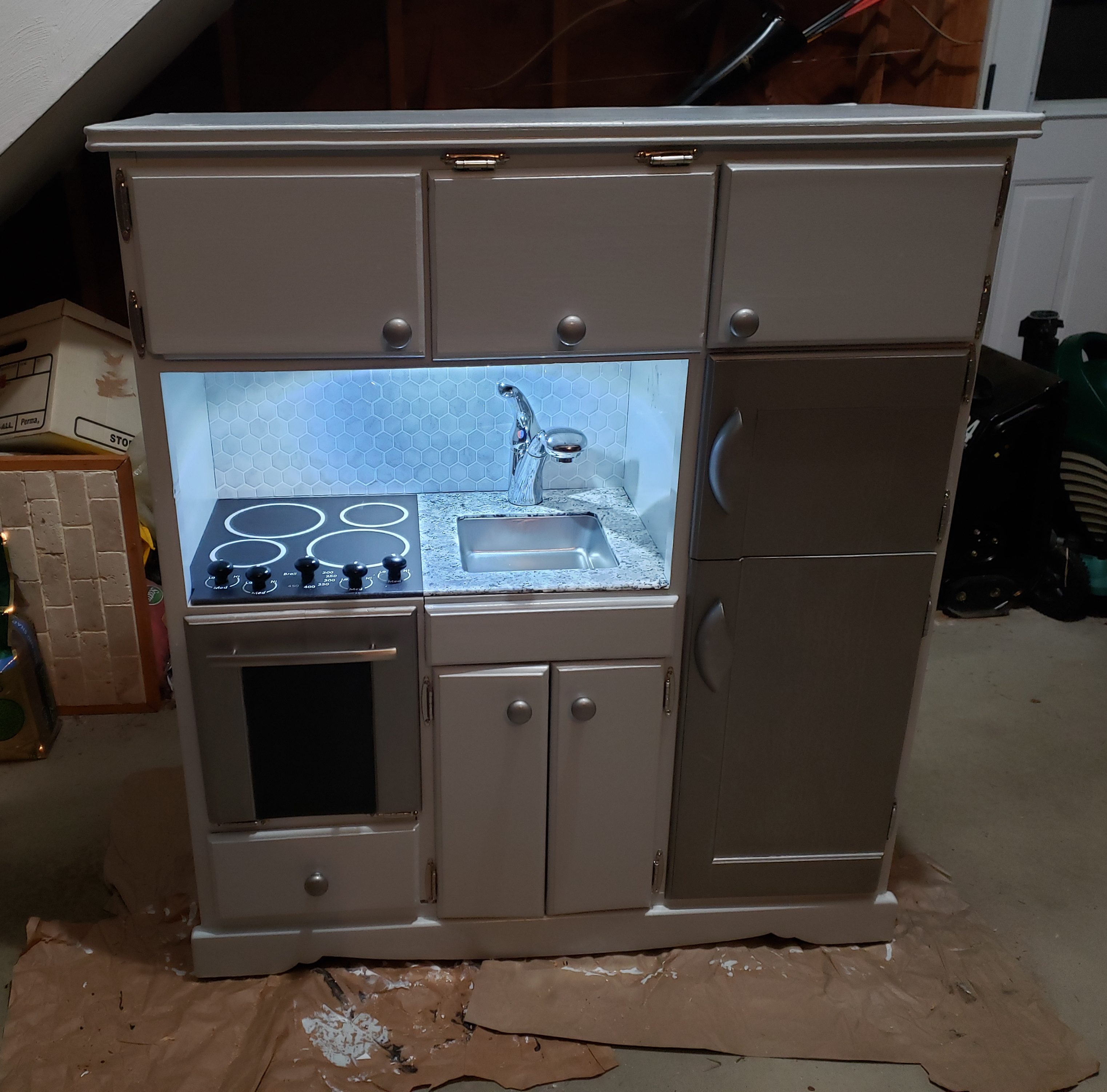 View with under countertop lighting 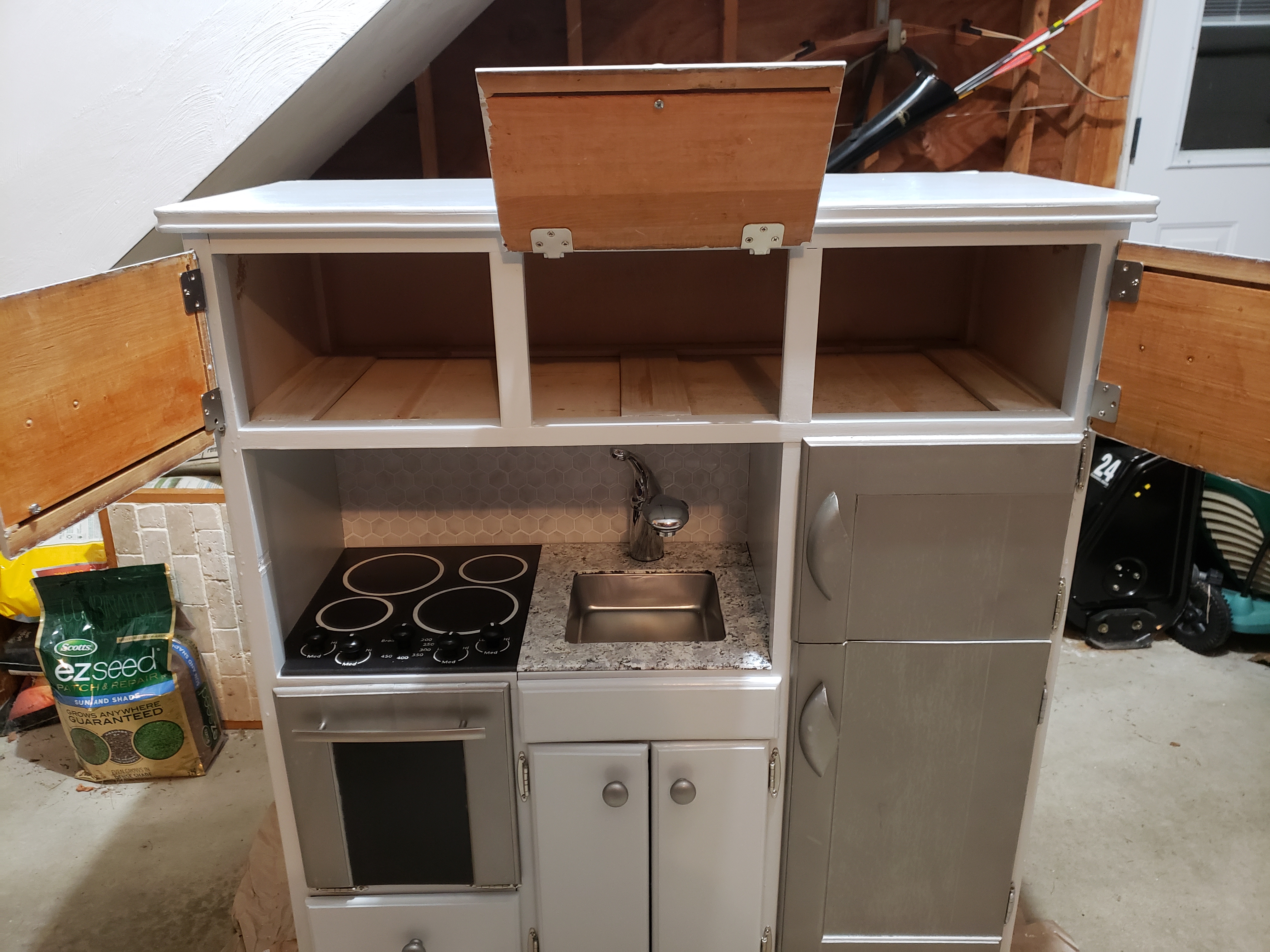 Inside view of top cabinets 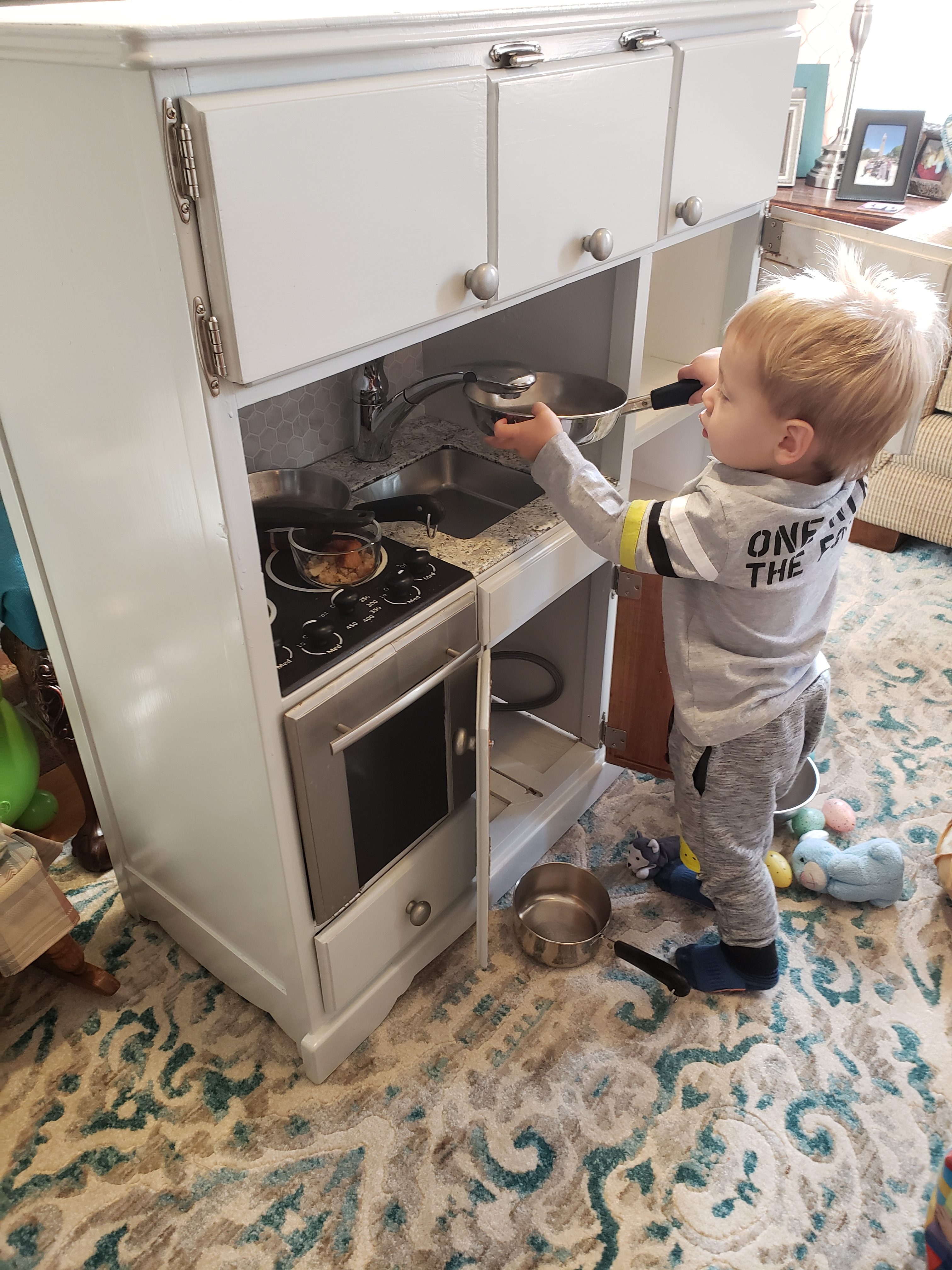 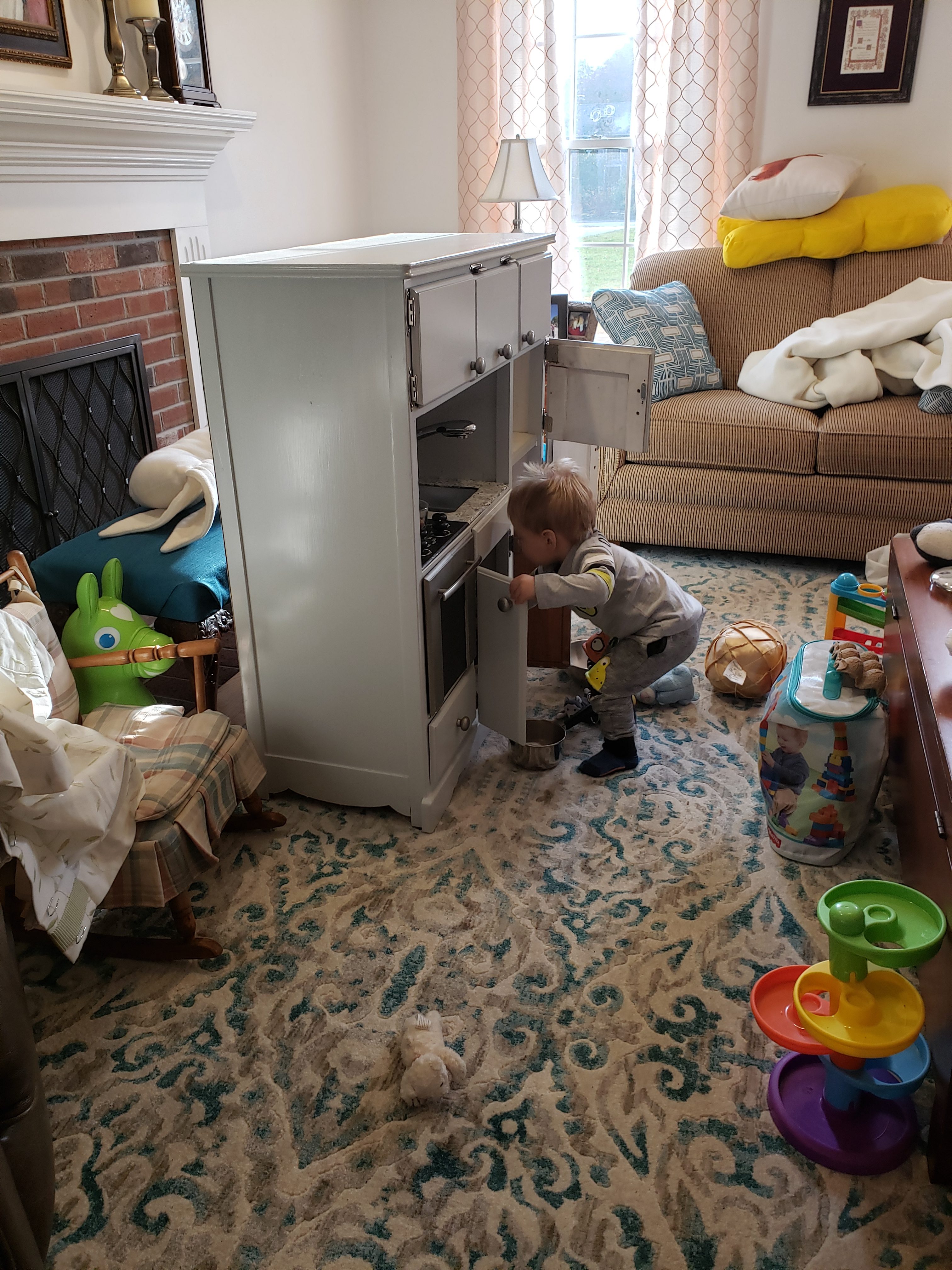 Checking under the sink for pans. 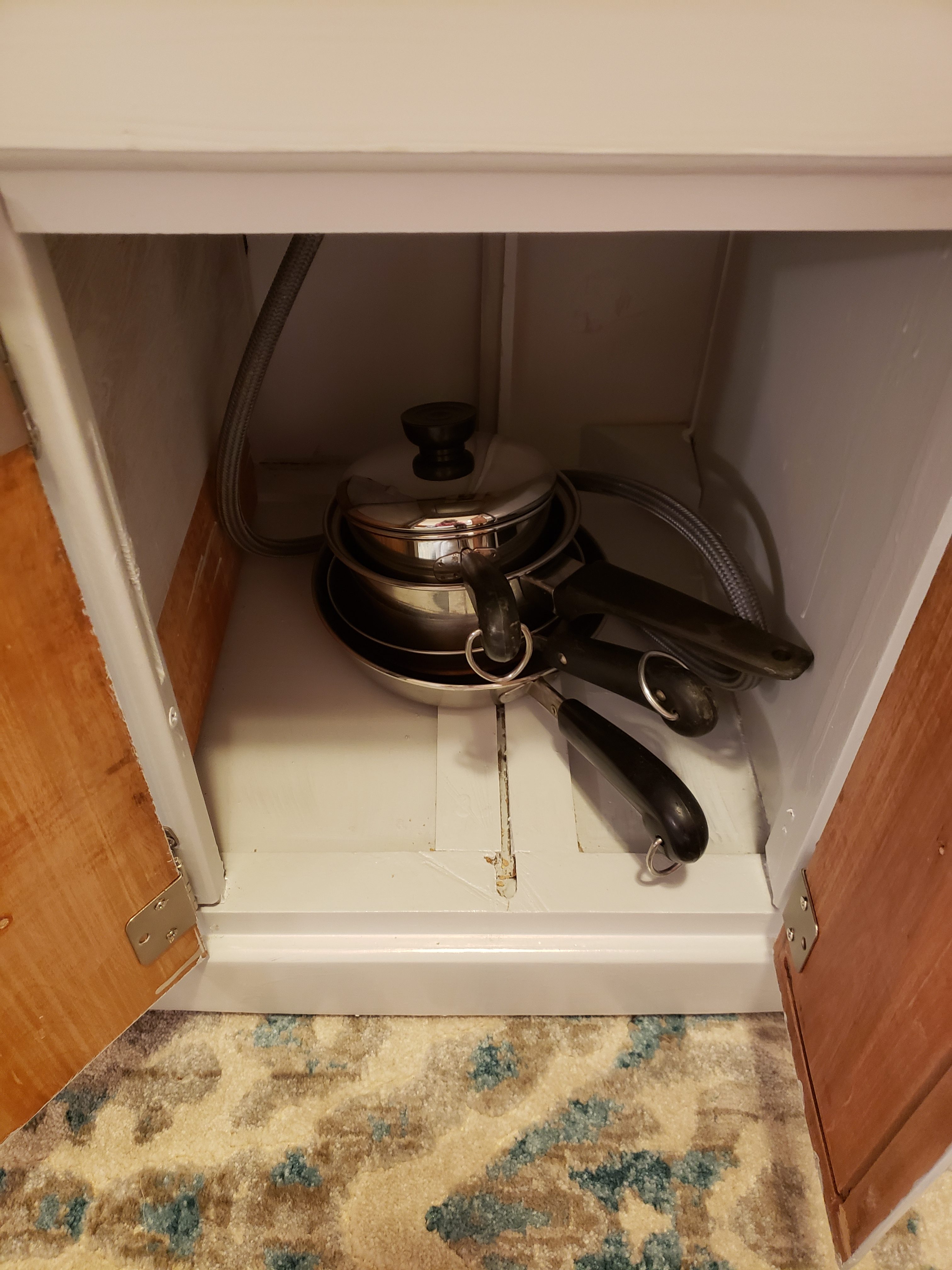 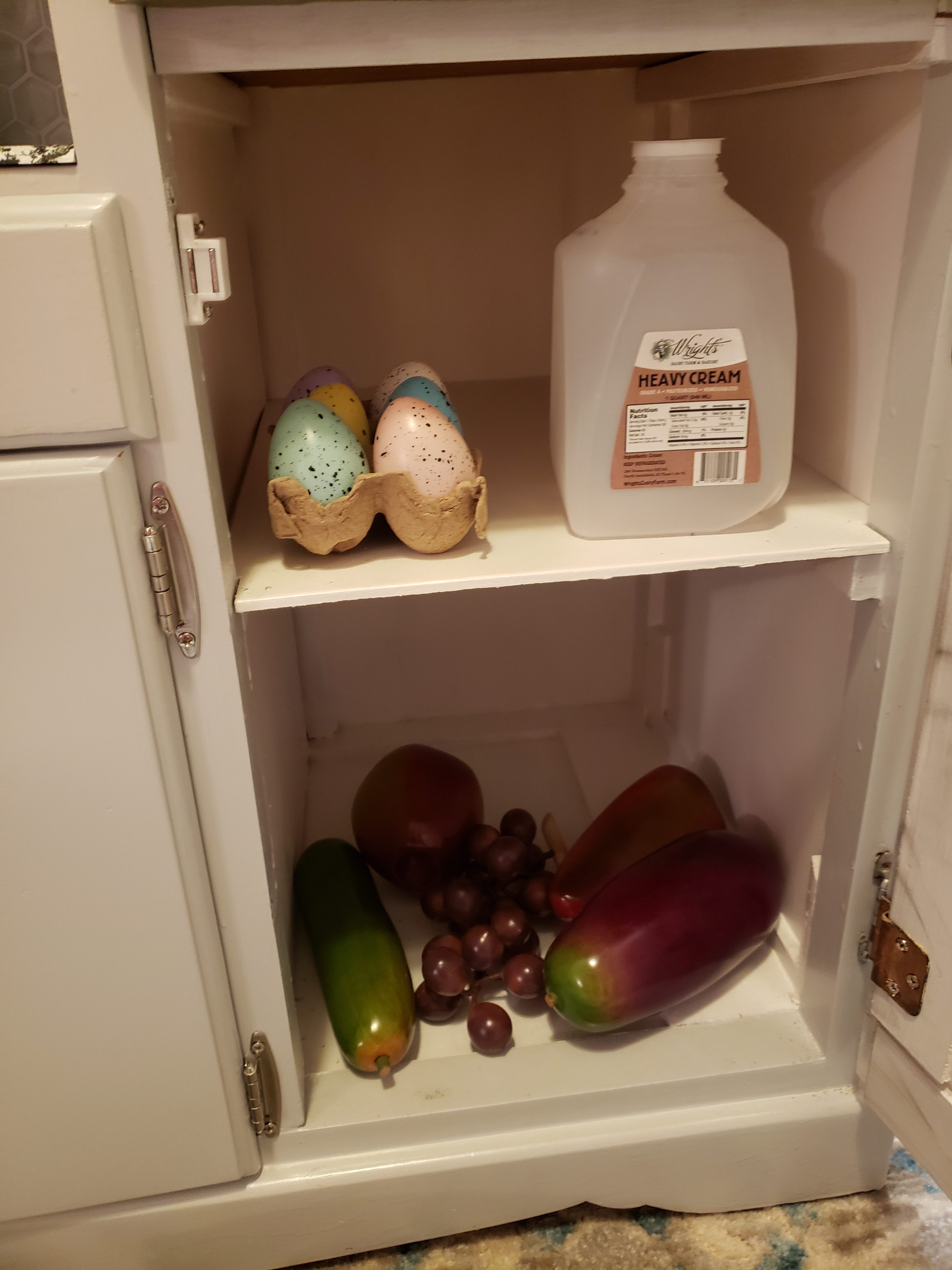 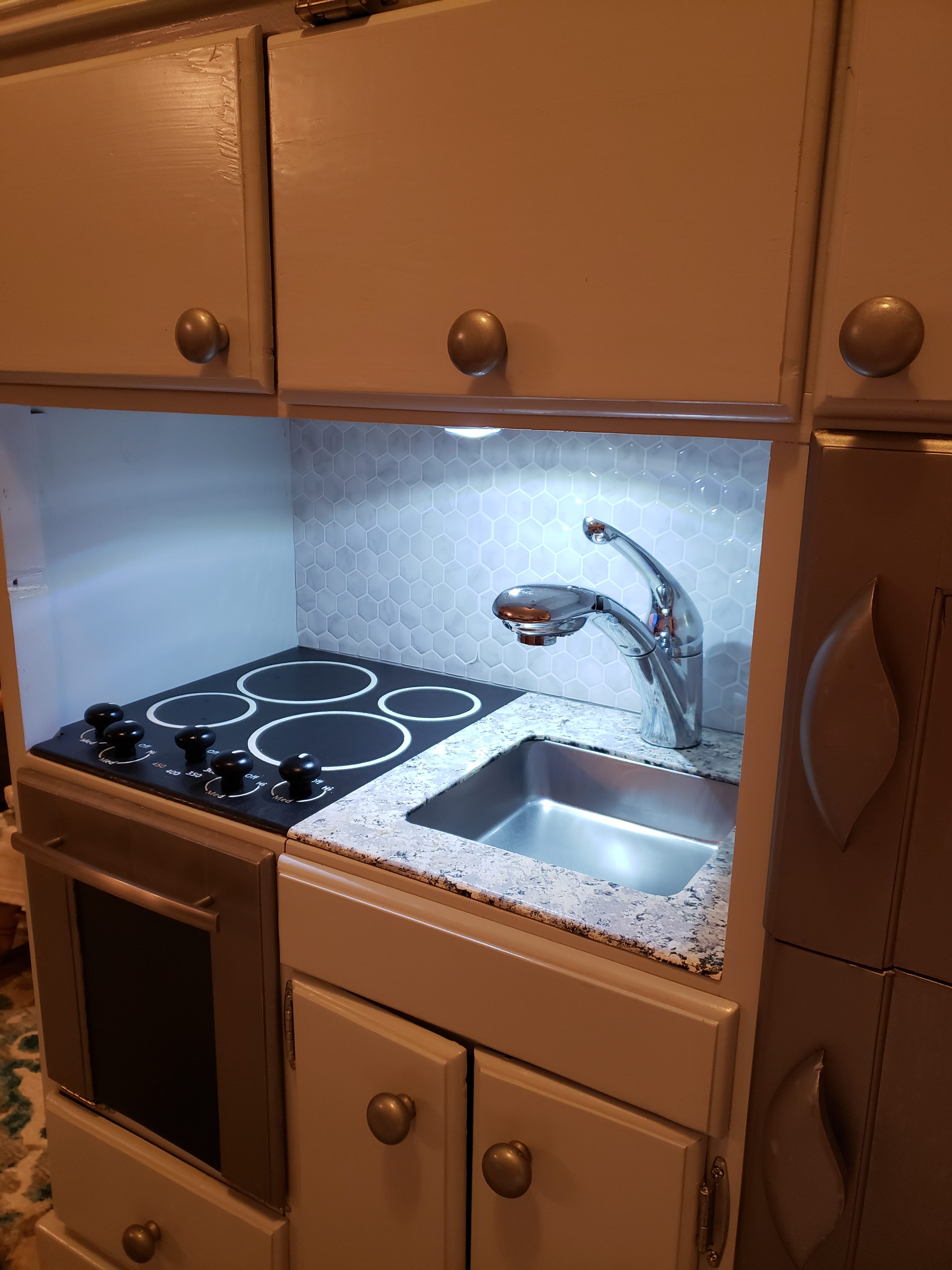 Under the counter light… 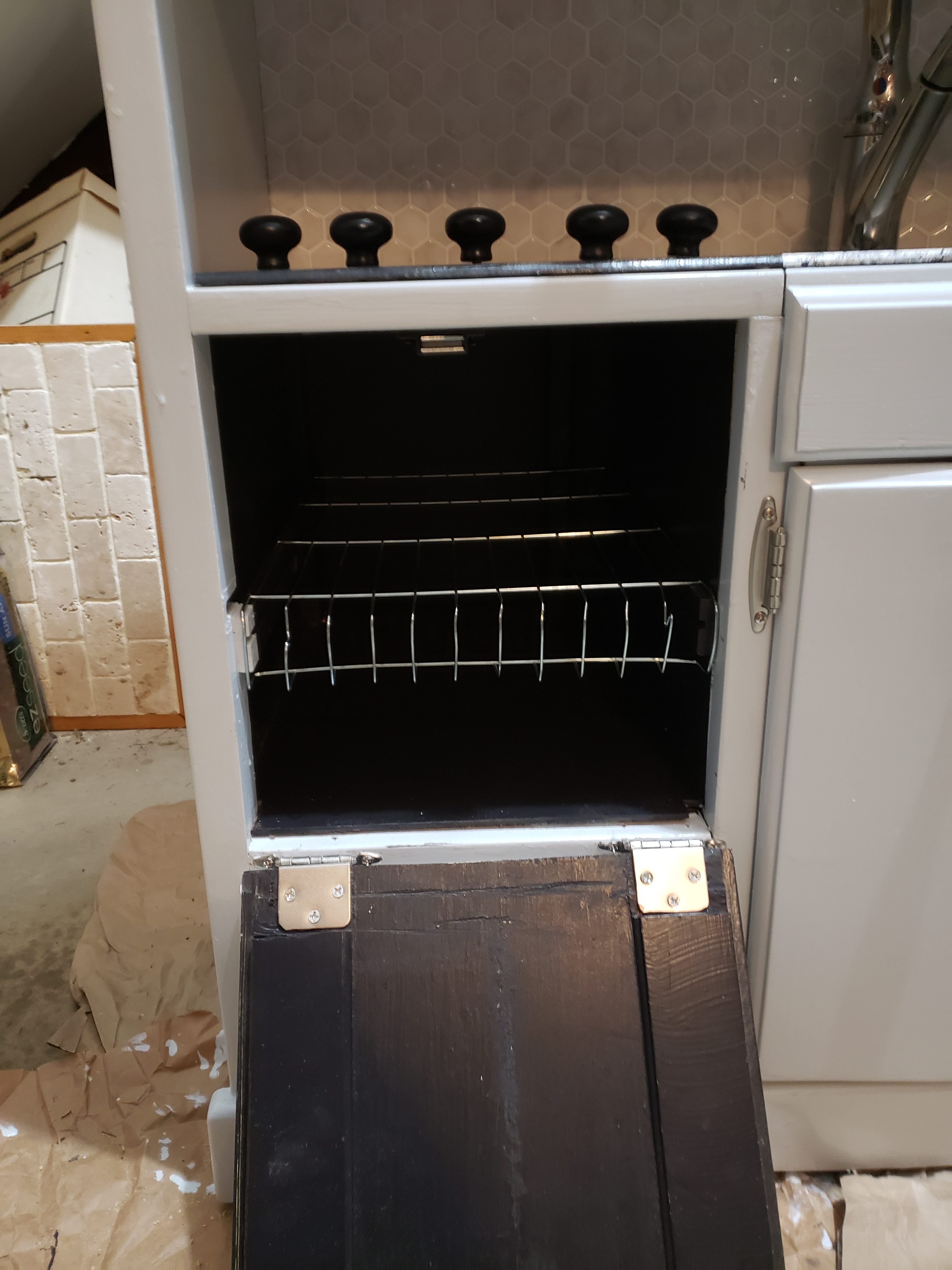 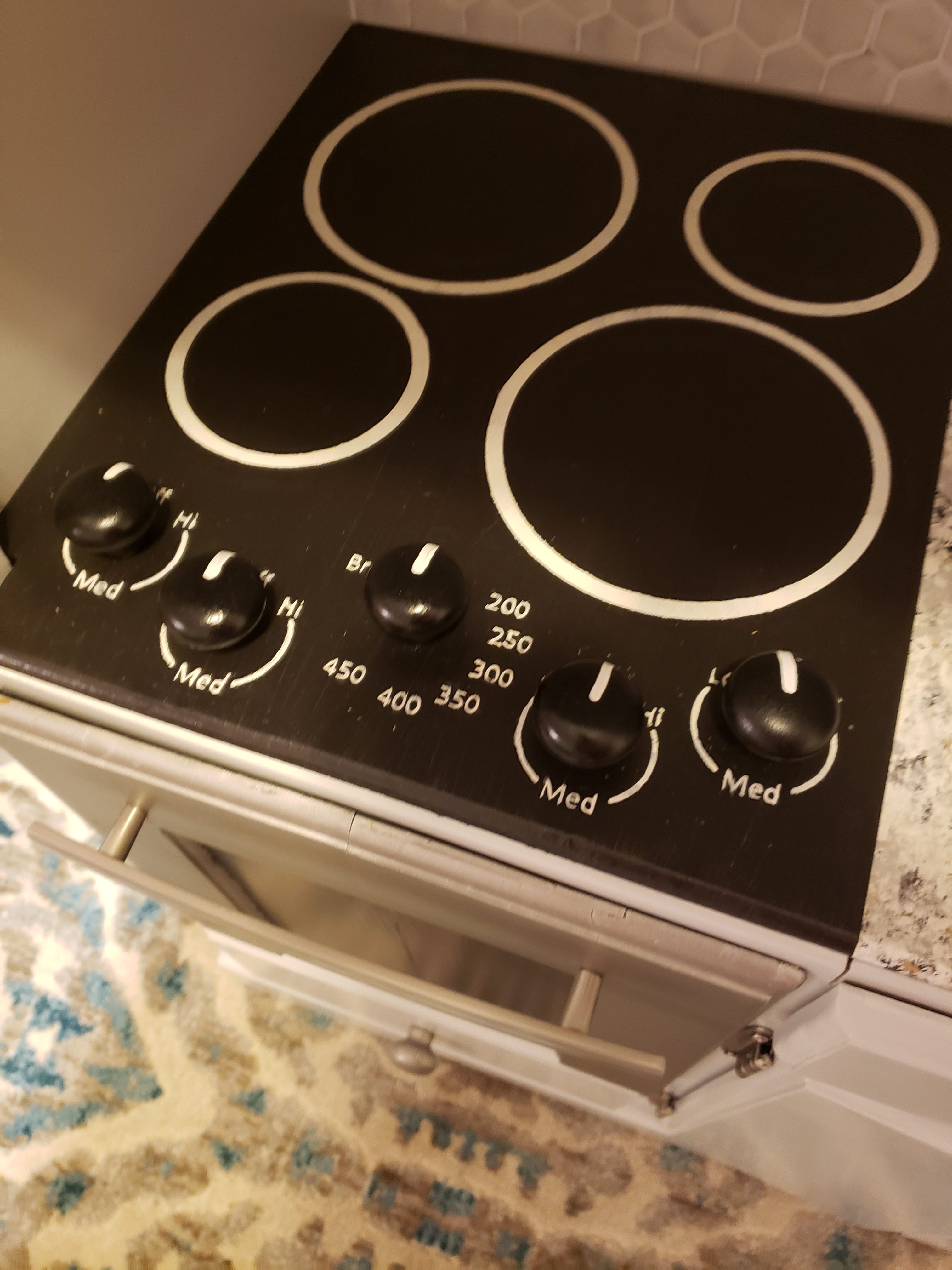 Total = ~$85.  Overall it was pretty expensive, given that you can buy a new plastic play kitchen for that price.  If I hadn’t bought the darn paint it would have been more reasonable.  But this thing is all solid wood and metal!  No plastic parts on this kitchen!  If you compare it to some of the models at Pottery Barn it was a complete steal!  Plus, I’m damn proud of it.