Julius has had so much fun this past week with his cousin Finnegan!  They have been doing lots of adorable things together with lots of adorable giggles.  After the first evening Julius spent with Finn I went up to his room to say goodnight because I was late home from work.  I asked him what he thought of his new cousin Artemis and his response was “baby’s crying” because at the time she was indeed crying.  Then seconds later he got all excited and said, “oh! Finn’s here!” And I told him that I knew and that it was very exciting.  His response was “I like cousin Finnegan” in the cutest contemplative little boy voice ever. 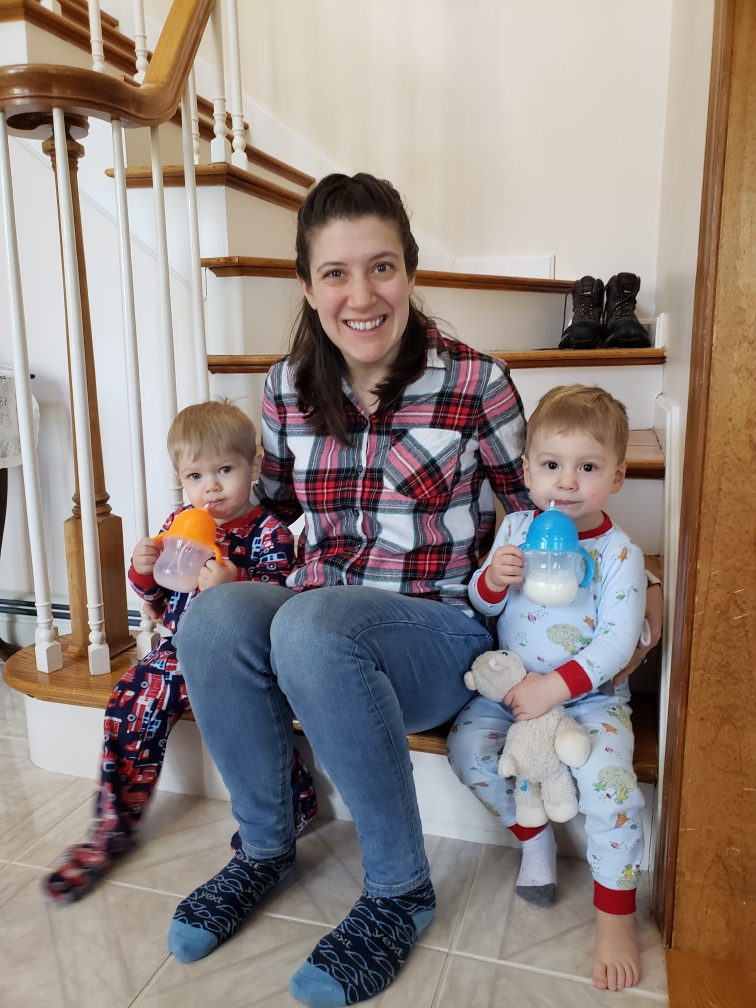 A rare photo where both boys were (mostly) in focus (usually one or the other was blurry due to constant movement).

In other news,  we’ve learned this weekend that while Julius’ love of baking may be waning, his love of music is only just beginning.  He saw Aunt Mandy’s guitar this week and could not contain his excitement.  He asked to play it about a dozen times. My favorite part?  He called the guitar strap “seatbelt”.  Watching Julius play the guitar while singing was adorable.  And I got front row seats! (“Mama sit.” says Julius, patting the ground in front of him.)  The only ones closer were Julius’ loveys Gaga, Sheepey and Baby Sheepey (who got stage seats). 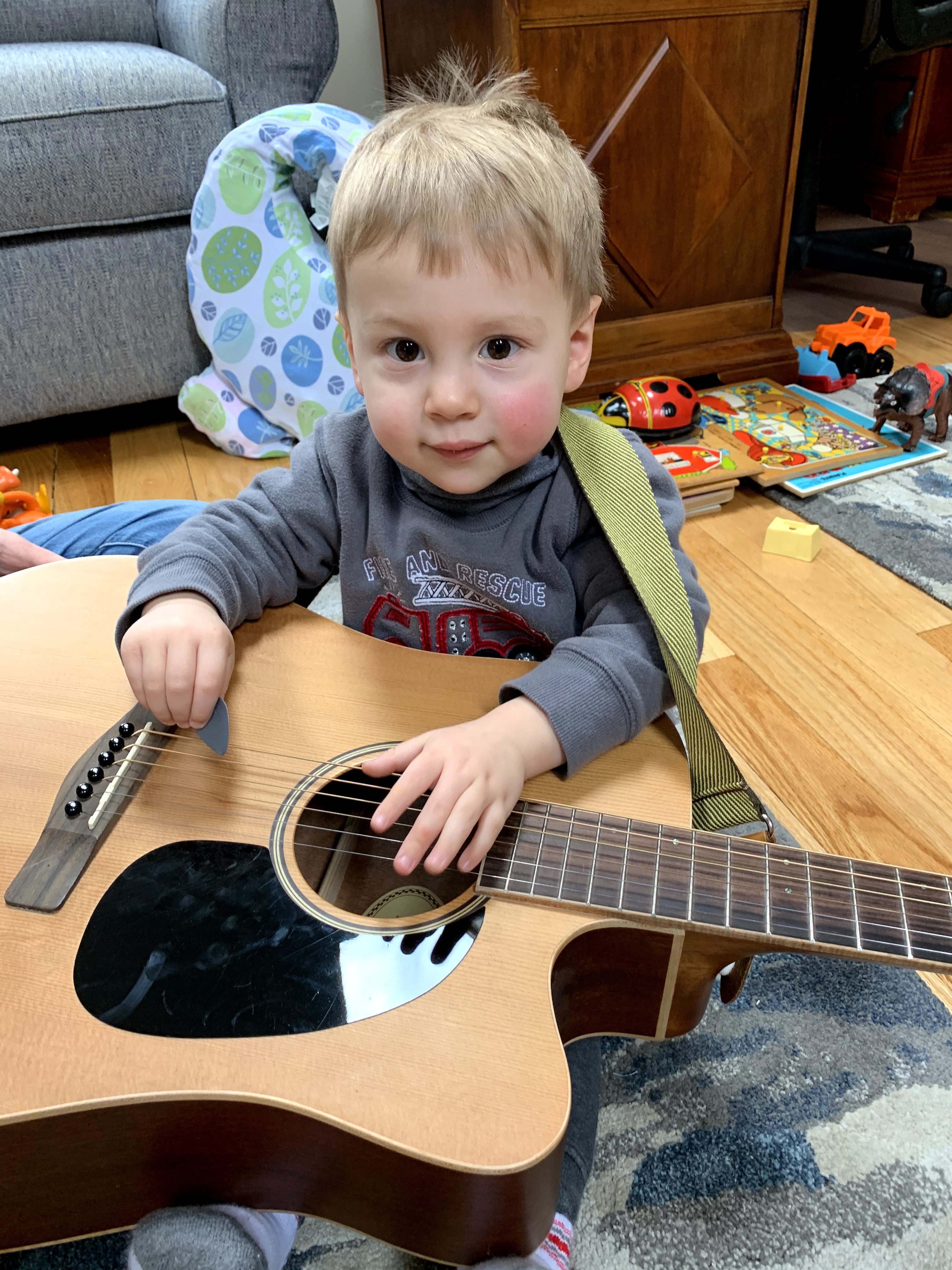 The face of a future rock star.

Despite Julius’ new found love I still decided to reorganize my cabinets for easy access to my muffin tins.  You know, just in case his love of baking renews.  I have this incredibly long, thin cabinet where I keep my baking sheets, cutting boards and cooling racks.  It’s so deep that I also keep all my muffin tins (mini muffin tins included) in there behind the baking sheets.  This is fine when you only need to make muffins every so often, but it got to the point where I’d be pulling out the muffin tins more often than the baking sheets!  In addition to being long and thin, it is also very tall.  To solve the muffin problem I decided to grow vertically. 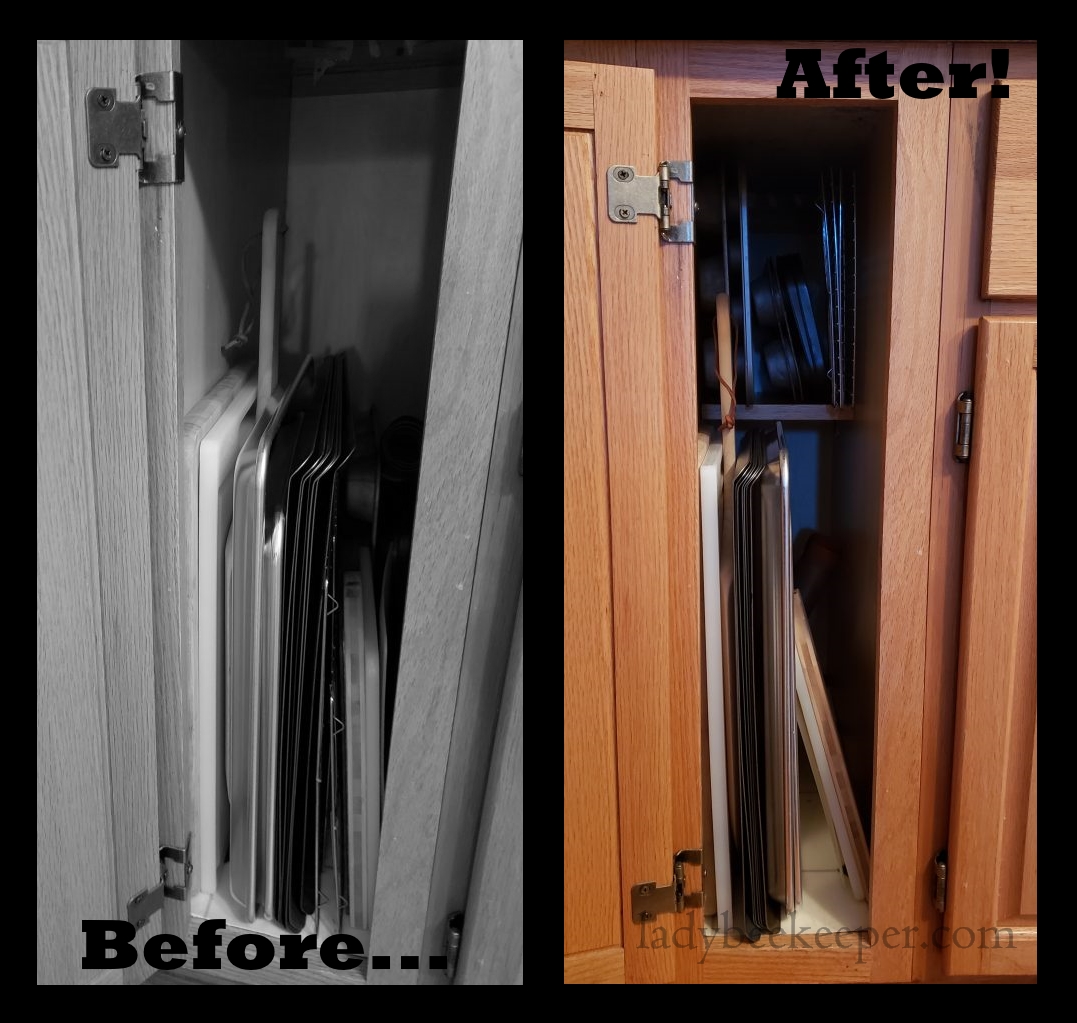 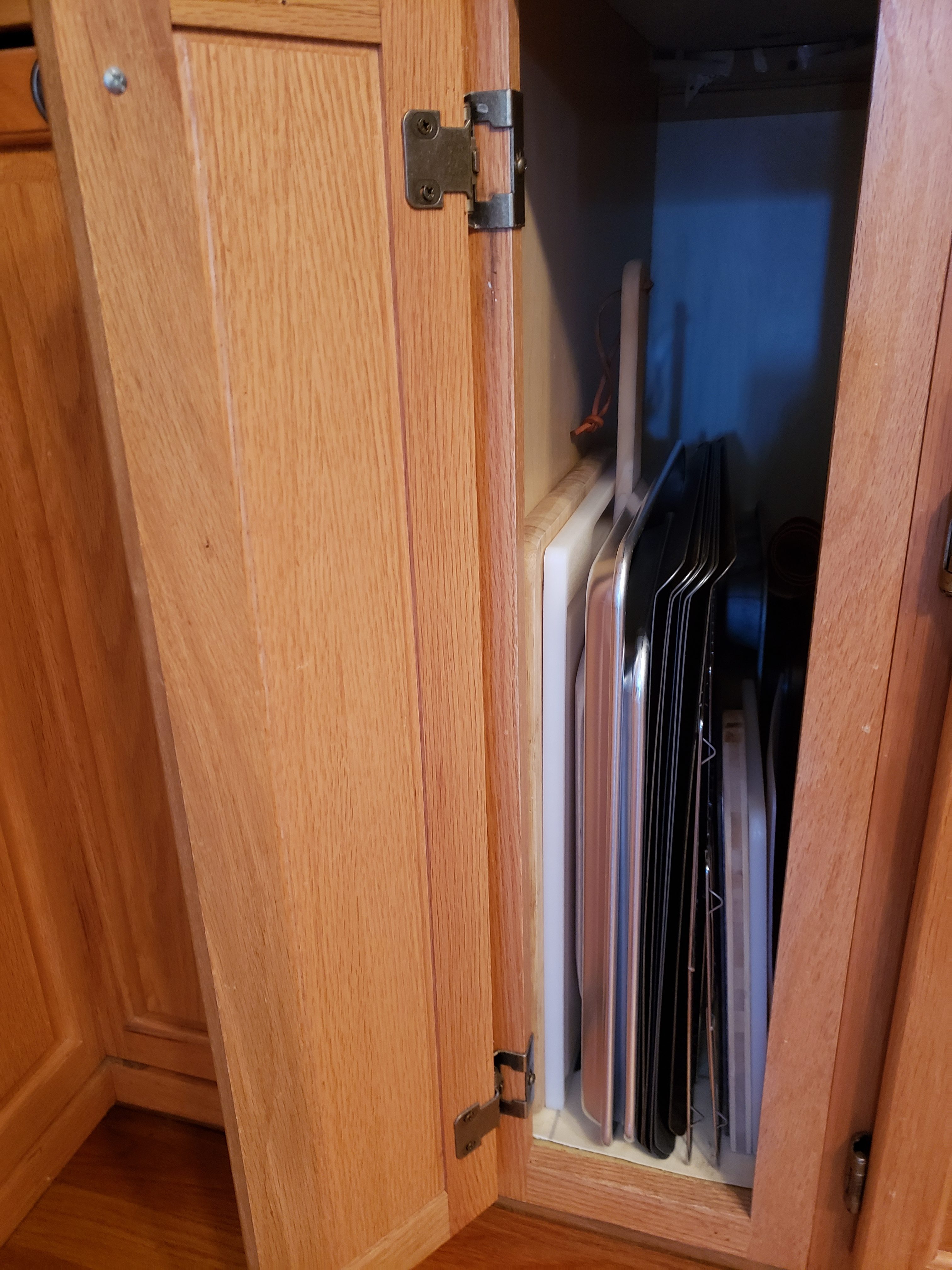 Before – Check out all that clutter! You can barely make out the stack of muffin tins behind all the front row baking paraphernalia.

The shelf is an old piece of scrap cabinet that I cut to 10″ deep by 7.5″ wide and sits 17″ above the floor of the cabinet, leaving a shelf 11″ high space for me to slide muffin tins and cooling racks onto. 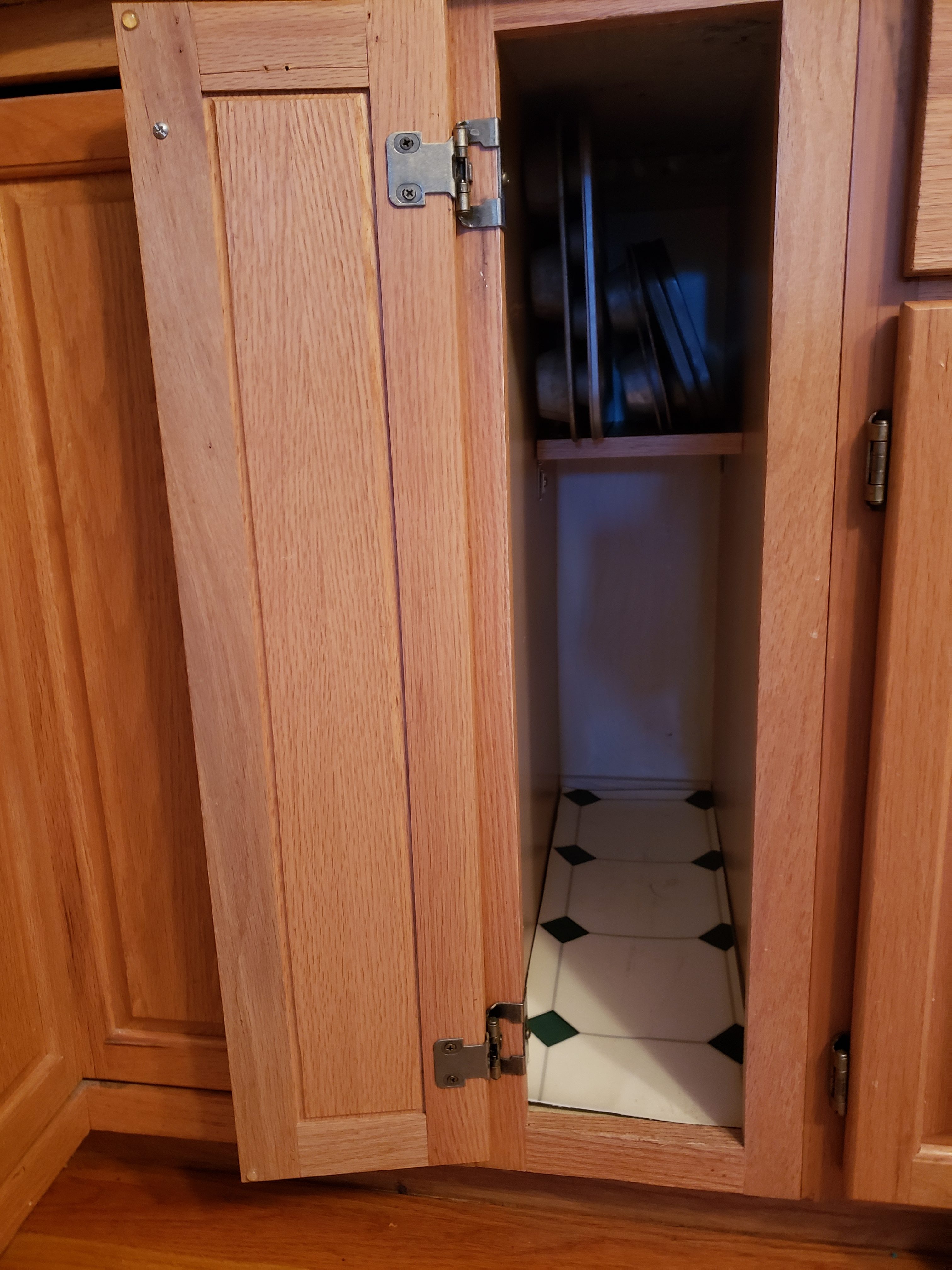 Finished shelf sits 17″ above the bottom of the cabinet and only protrudes less than halfway into the depth of the cabinet, so if needed taller items can still fit in the front space.

I used repurposed those Ikea wall mounting brackets as the braces for my shelf and screwed the braces onto the shelf before I mounted it. 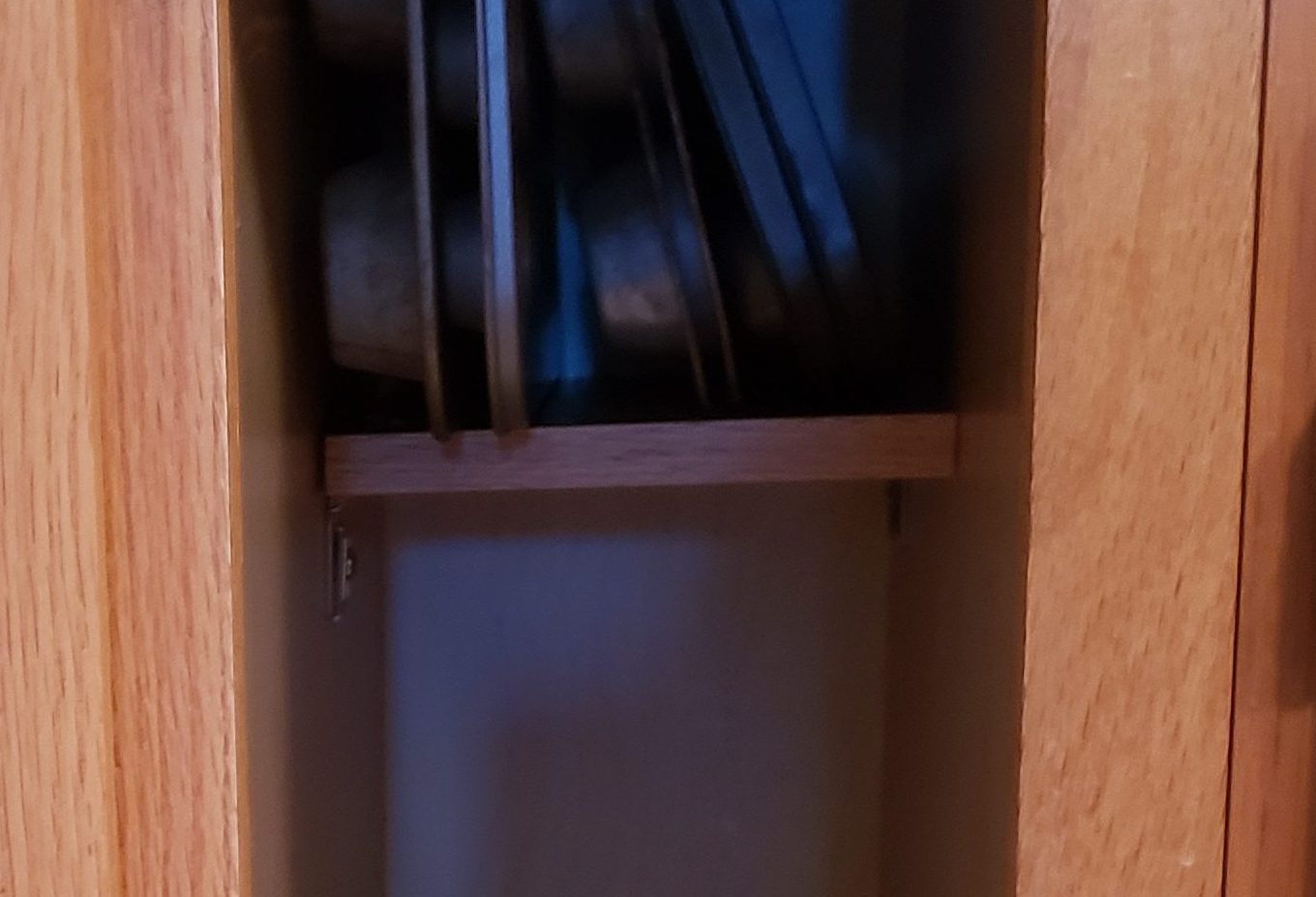 Because the cabinet is only 7.5″ wide, mounting the whole thing inside the cabinet was a task of perseverance and raw muscle.  I used a short handled ratcheting screwdriver (that I got from a Yankee Swap several Christmases ago and LOVE) and lower arm muscle to drive the screws into the walls of the cabinet.  The walls were made of some kind of compressed hardboard type board so it was VERY difficult to get them to bite.  I attempted several times to tap in some nail holes to use as pilot holes with limited success.  (7.5″ minus the length of a nail is not very much room to hammer a nail…)  I don’t have a picture of this because it was nearly impossible to wedge myself into the cabinet in such a way that I could reach that far back.  It was completely selfie proof. 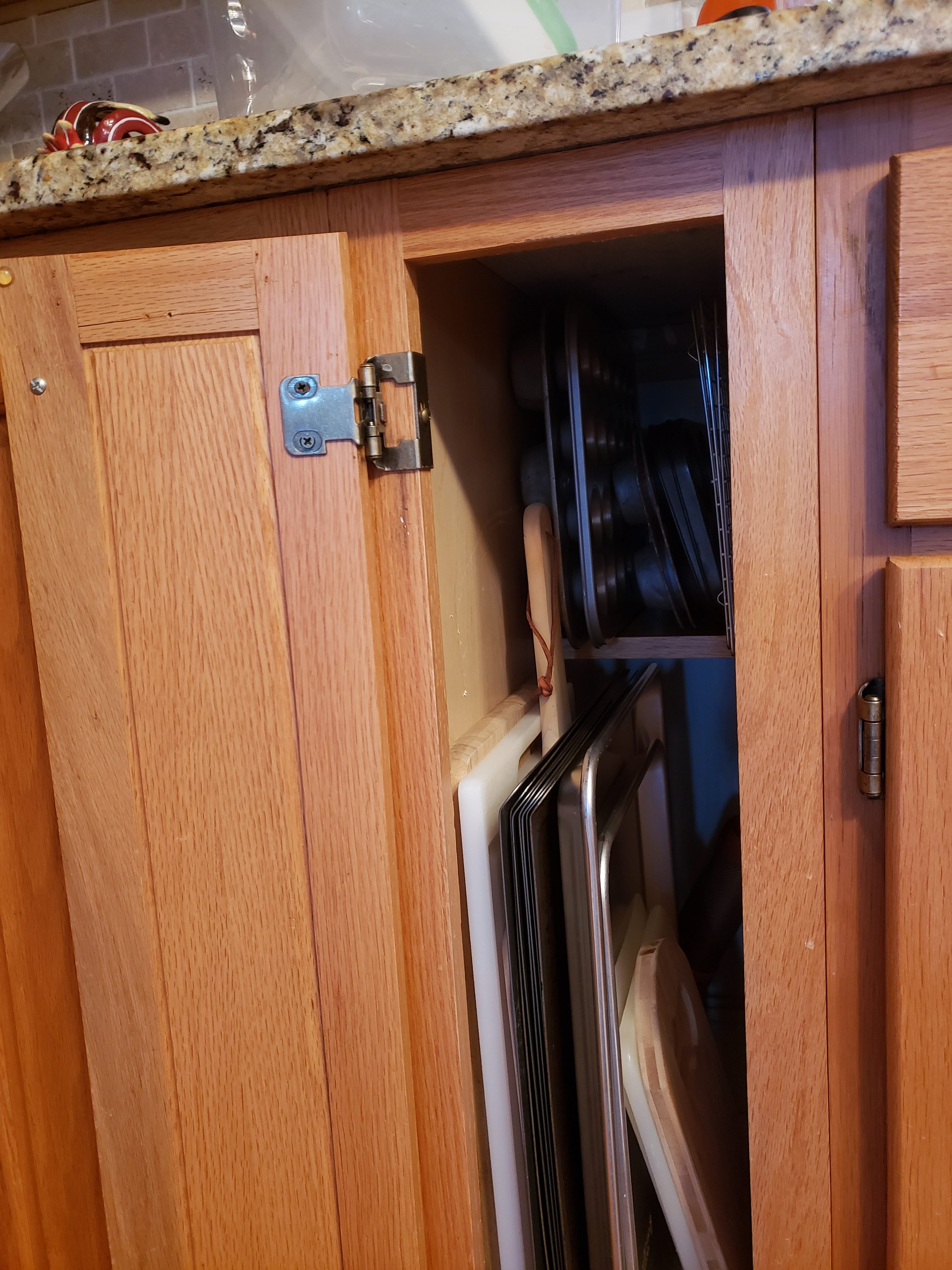 Look at how much more organized my cabinet looks!

The shelf works great and makes my cabinet feel so much more organized!  I no longer have to move things around to get access to my muffin tins and I even had space to put my cooling racks on the shelf, making the bottom space feel roomier! 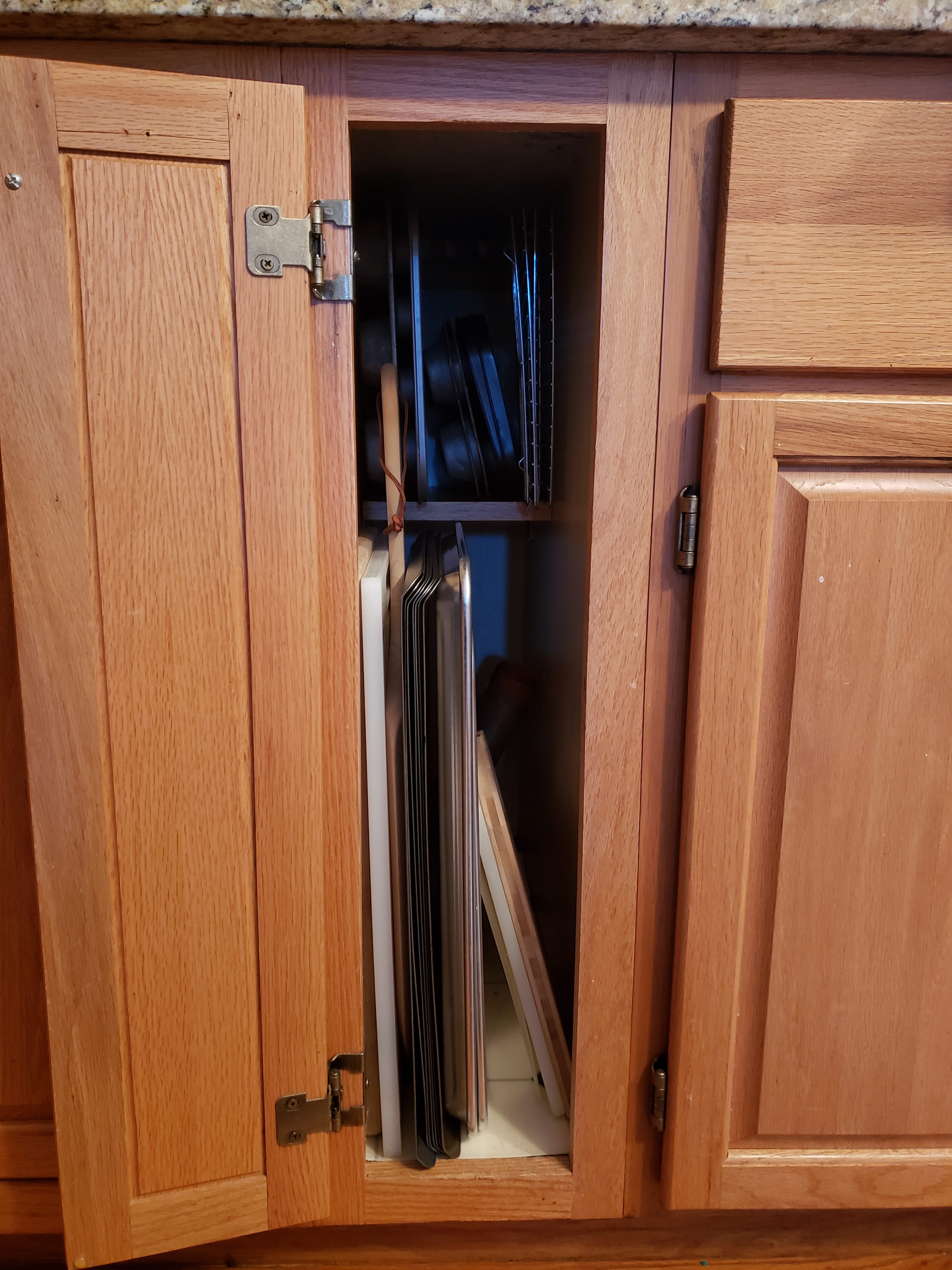 Wow! Everytime I open my cabinet I stand in awe of the baking organization!

This entry was posted in Home Improvement. Bookmark the permalink.