You’ve probably heard me talk about my grandma’s Swedish Meatballs at some point in time (maybe here, here, or here).  My grandma used to make them every year for Christmas and over the years my mom and I have slowly taken over making them.  For this reason I’ve gotten  smarter in my preparation of meatballs.  The original recipe requires you to lovingly pan fry them a few at a time but when you’re making 200 meatballs that gets really old, really fast.

The other problem is that the delicious Swedish meatballs my grandma makes contain not one, but two types of meat!  This makes them twice as non-vegetarian (that’s definitely how that works).  German food and gravy are two of the things making me want to cave on this whole vegetarian thing.  I was looking over one of my recipes, which was chicken schnitzel with mushroom gravy, the other day and realized that pretty much the entire world of my grandma’s German cooking is out the window.  That is not okay!    This (and selfishness for not being able to eat Swedish meatballs on Christmas) lead me to attempt a vegetarian version of Swedish meatballs from Impossible Meat.  It was darn close to the original and I’ve had it 3 times now.  Plus with all the shortcuts passed down in the Kohm/Collins/now-Colton family, it is a breeze to make (as far as Swedish meatball making goes).  Now to figure out how to vegetarianize rouladen… 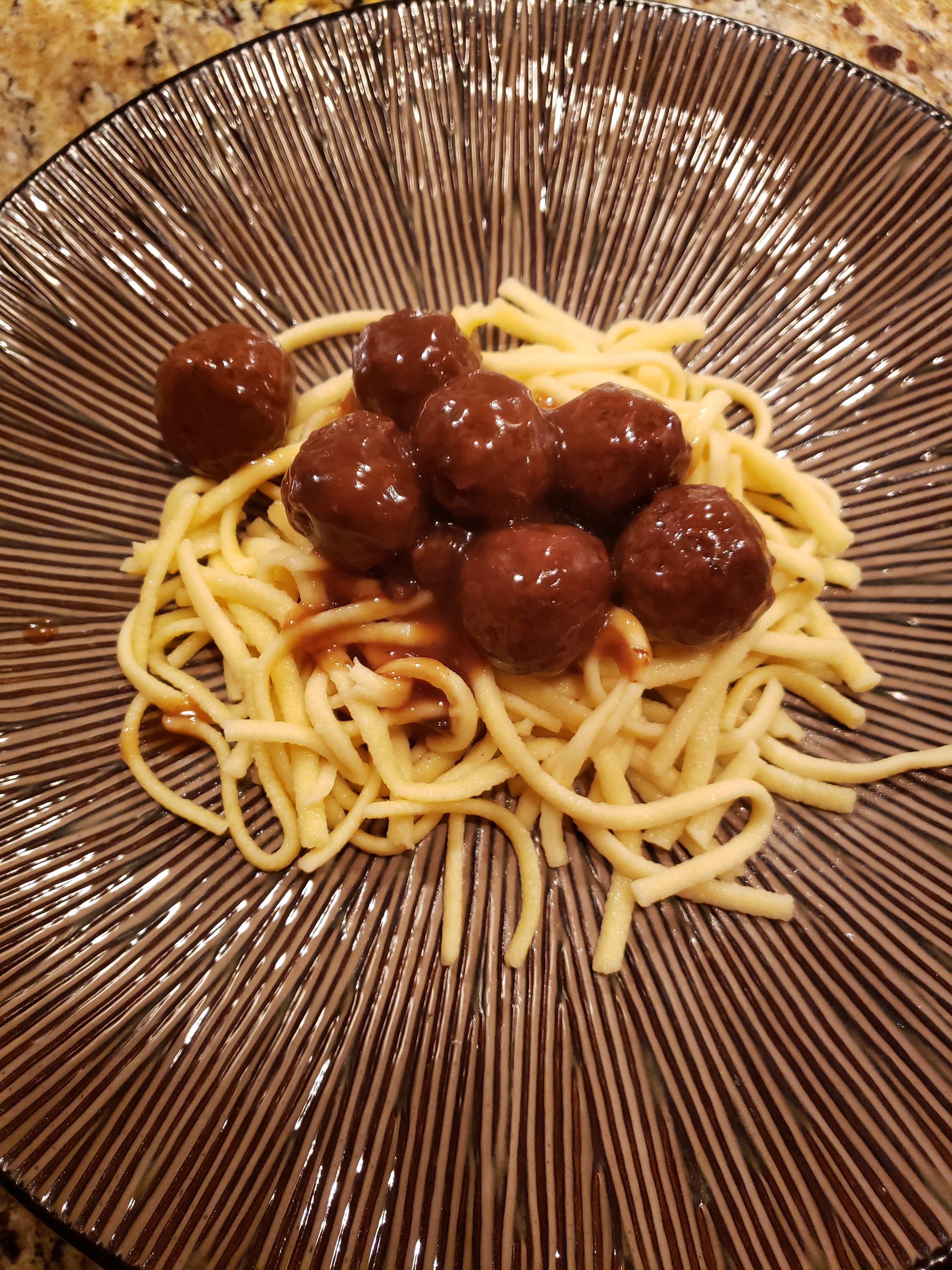 Preheat oven to 400 degrees.  Combine all ingredients except mushroom gravy and olive oil.  (It is easiest to mix with your hands to really get everything properly combined.)  Let stand 30 minutes for flavors to mingle.  Scoop meat by teaspoonful and roll into balls.  Place on a rimmed baking tray, drizzled with olive oil and either toss balls in olive oil or lightly spray with olive oil.  Bake at 400 for 10 min until the meatballs have browned, then flip meatballs and cook for 7 more.  At this point you can freeze the meatballs* on a new tray in the freezer until firm and transfer to ziplock bags or freezer proof containers for storage.  If you would like to eat them right away, stick them in a large saucepan, cover with the mushroom gravy and bring to a simmer, stirring periodically to prevent the meatballs from sticking to the bottom of the pan.  Let simmer for 30 minutes so the meatballs impart flavor to the sauce.  Serve over spaetzle.

*To reheat the meatballs from freezing I usually stick them all in a crock pot in the morning, throw the sauce on top and cook on low until dinner time.

**My grandma is the original smart cook, she used to make a delicious gravy to go over the swedish meatballs but eventually realized that canned gravy worked nearly as well and took way less time to make. 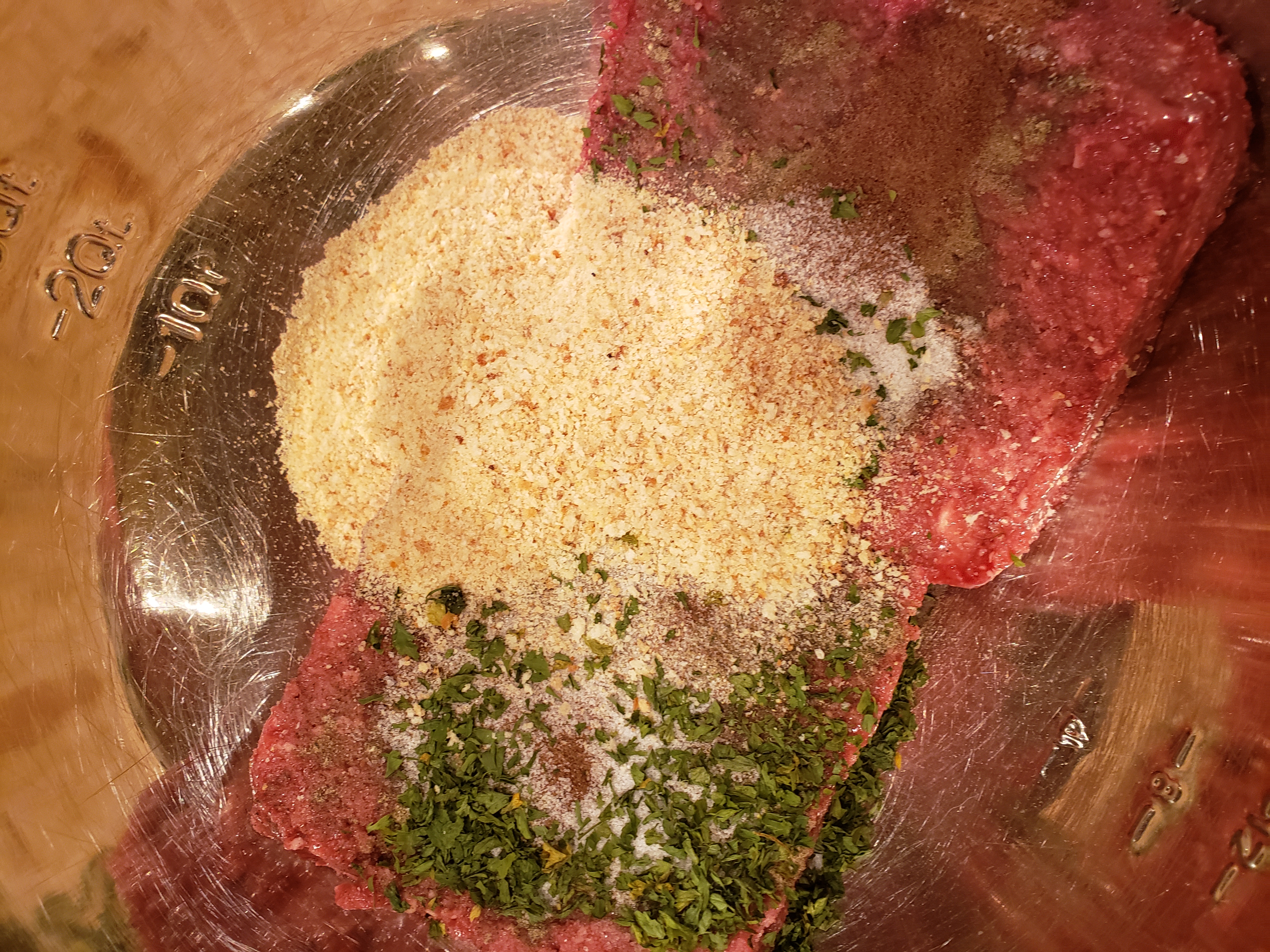 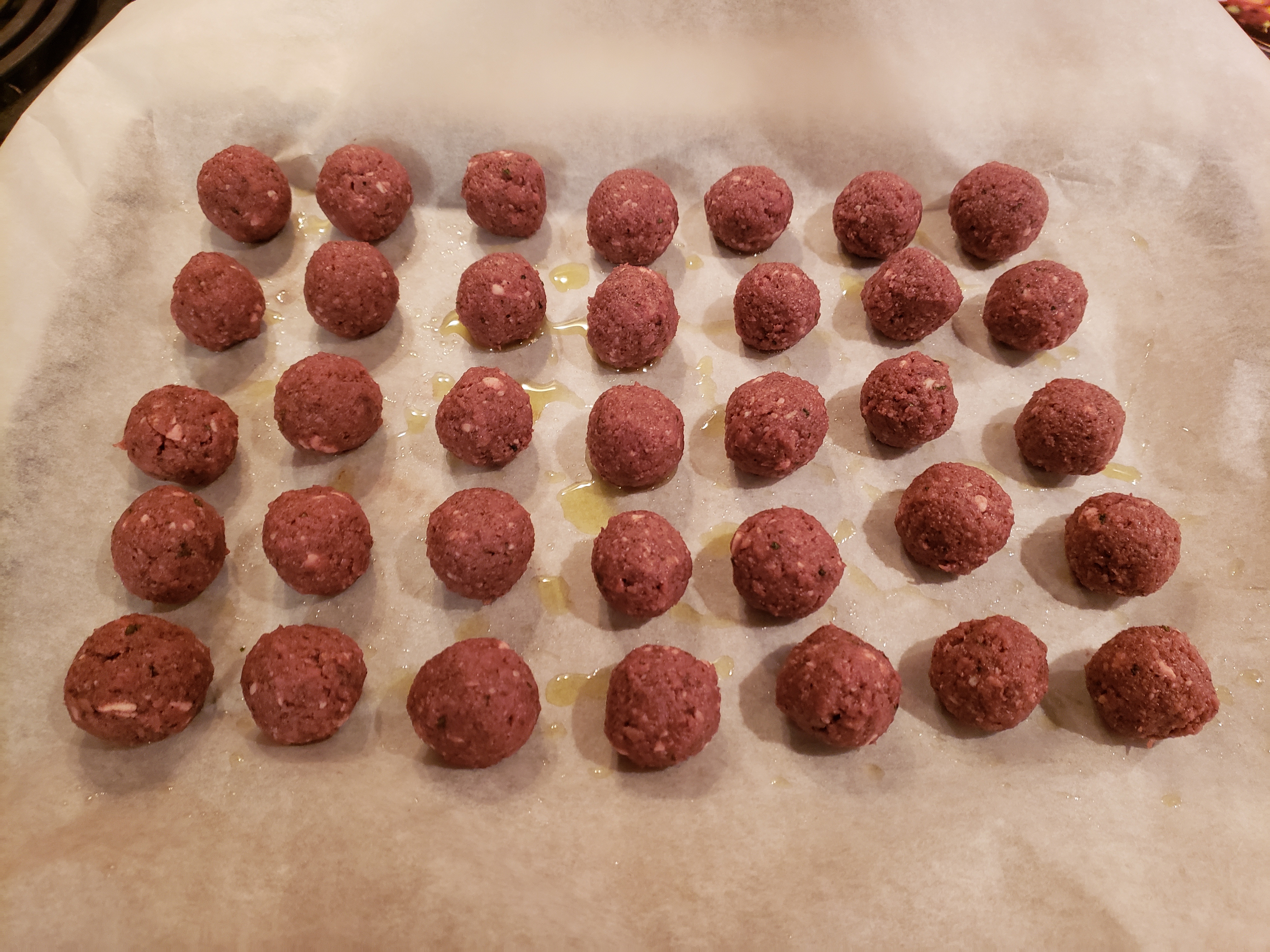 Meatballs prior to rolling. 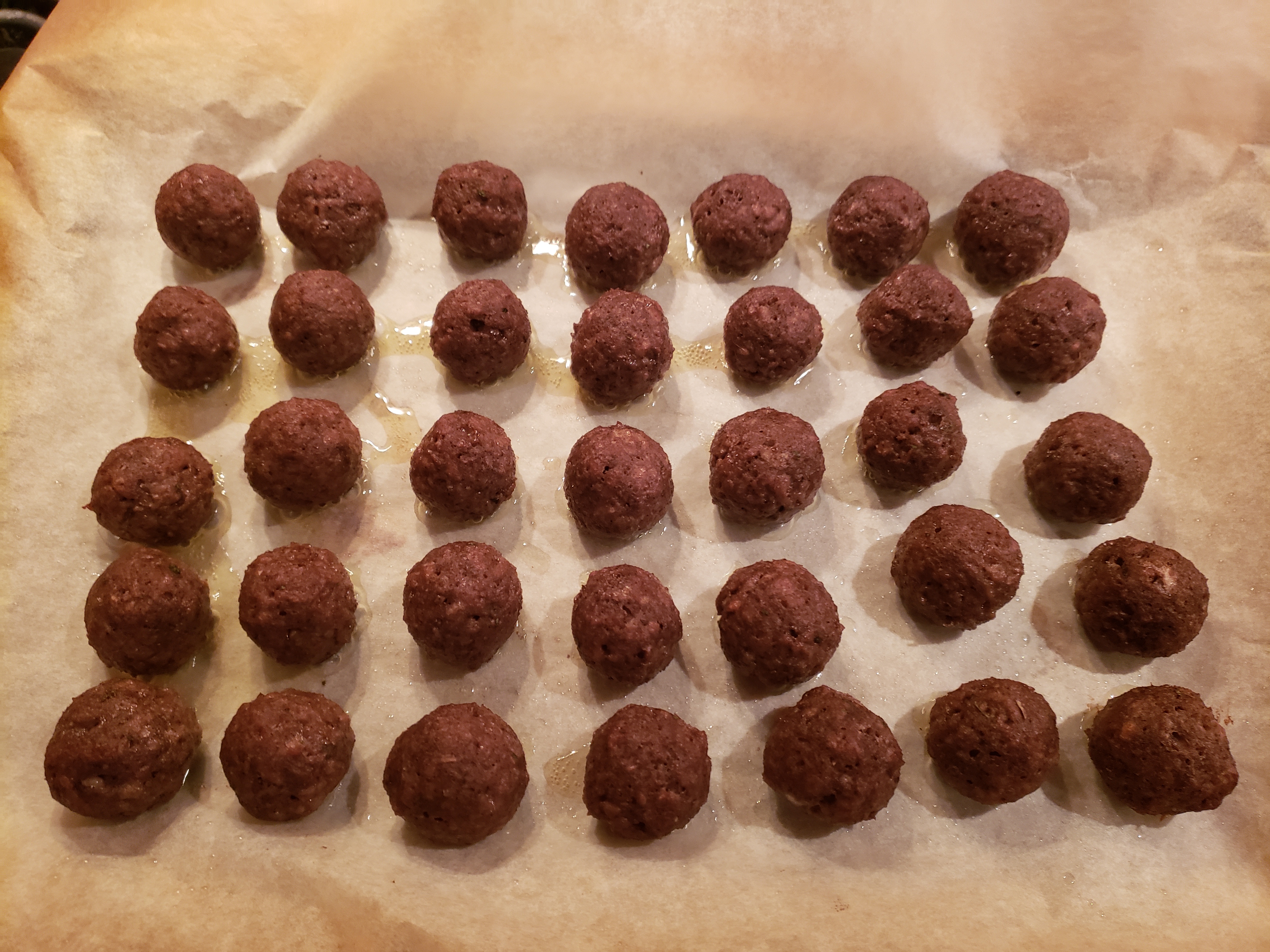 Meatballs after the first browning step. 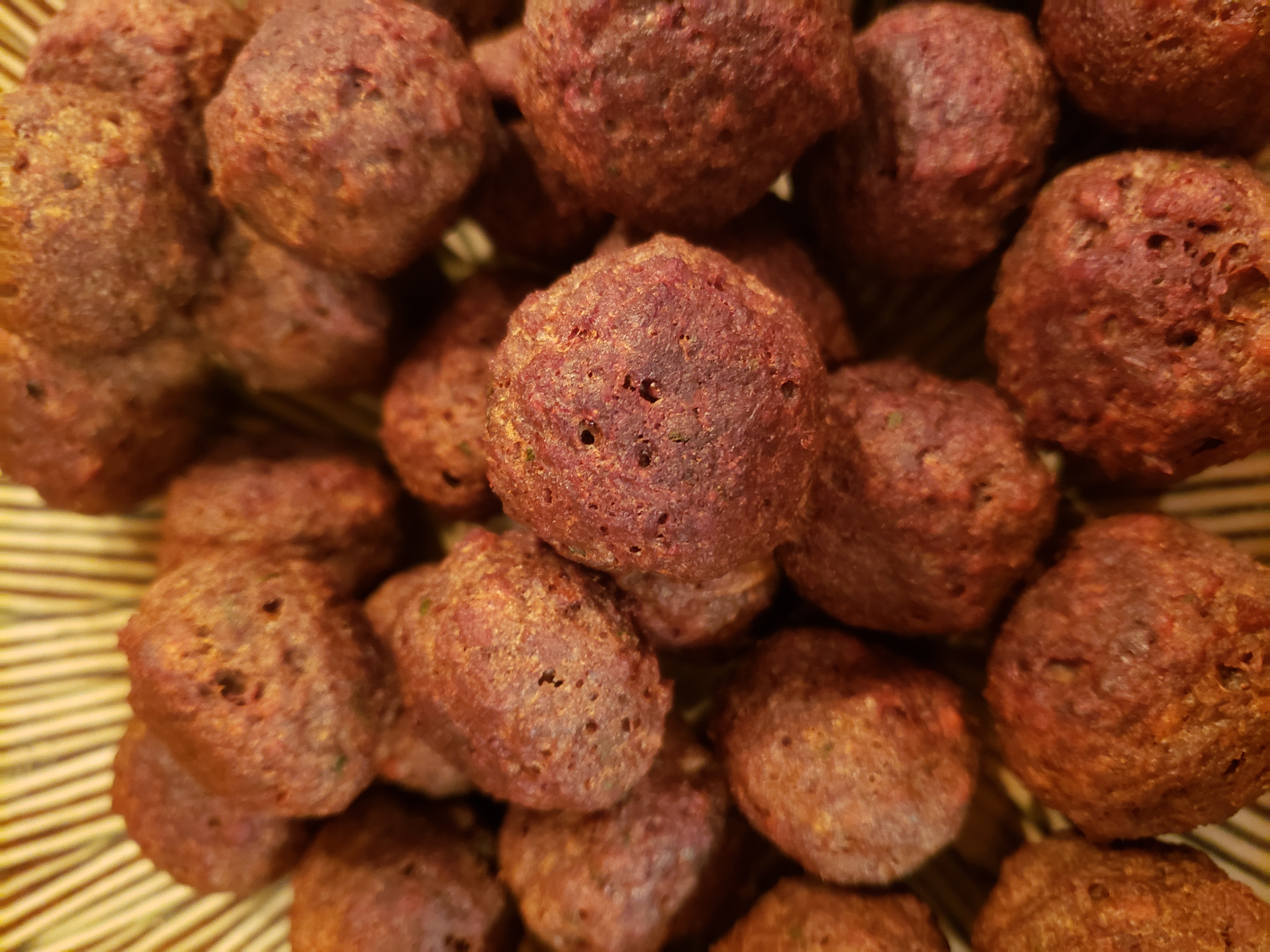 2 Responses to Sweet Dish of Meatballs