Never do woodworking when you’re pissed off.  I feel like this should be the number one thing someone tells you when you buy a saw.  I was working on Julius’ birthday present last night and was in a bad mood over a particularly crappy router I purchased from Home Depot.  The thing was so horribly made that I spent a solid TWO HOURS trying to get the base to move above the collet and bit.  That is not an exaggeration. Anyway, I digress.

After being grumpy that I wasted my whole evening (and one of my drawer faces) I decided to cut off the portion of the drawer face that the router had ruined.  Problem was I didn’t want to remove the face from the drawer itself so I couldn’t cut it on my chop saw or band saw, and I decided the circular saw was too dangerous for this task.  Ultimately I decided to use my handsaw.  It was hard.  Repairing the side of drawer I had ruined meant I was ripping the wood by hand.  I also don’t own a rip saw, so I was using a cross cut saw (clearly in addition to forgetting to tell me the number one rule above, my saw benefactors also forgot to tell me about rip saws vs. cross cut saws).  I was about 3/4 of the ways through the wood and somehow the piece I was sawing broke off.  This did not deter me.  I lined the saw up with the broken edge and applied the same very firm pressure I had been using.  Unfortunately since I didn’t have a divet for the saw to follow the saw jumped the tracks and I got about 12 lacerations on my left hand.

The best part of the story is that I woke Will up for his ‘professional’ evaluation because I don’t trust my opinions with blood and guts.  I very quietly said “I don’t want you to freak out because it’s really not that bad, but I cut myself with the hand saw.”  I thought that was a very logical way to put it.  Will asked me to show him (which frankly I was impressed with because he doesn’t have the best track record with medical things) and when I did he exclaimed “you need to go to the hospital”!  So I went to the hospital (which is only 3 minutes from our house), and in the nicest way possible they told me that I’d probably be waiting all night for something that lame.

Another dose of realism for the day is that I’m a toddler push over.  I put Julius to bed 4/5 days last week because Will had to work late, and not once did I get Julius to bed at his bedtime. Honestly the closest I got was half an hour after his normal bedtime.  But really, how can you rush a little boy when he’s playing a ukelele while pooping on the potty?

If you feel like all you do is clean up poop all day I’ve got the perfect craft for you!  This is a little holder for your dog poop bags that you can clip onto a leash or stroller!  Will and I reuse the produce bags we get from the grocery store as dog poop bags while we’re on walks with Dany.  While we’re at home we use a giant pooper scooper to clean up the poop so we don’t waste bags.  You can fit about 15 produce bags in this little holder for when you need them. 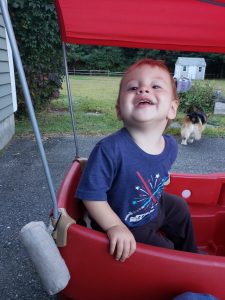 Julius likes to show as much of the inside of his nose as possible now when saying “cheese”. 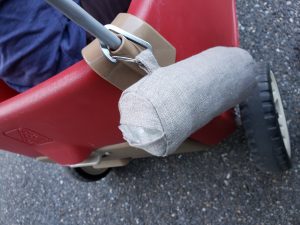 Waste Bag Carrier on the ready 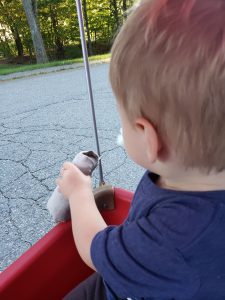 2 Responses to Taking Care of Business