These last two weeks have been filled with showers!  I am so lucky to have such wonderful friends, family and co-workers to celebrate with!  The first shower was a complete surprise.  I had known my friends Amy and Roger were planning to hold an event at work with cake to celebrate.  They had told me several weeks ago because they wanted to make sure I’d be at work that Friday because apparently the invite list had grown to greater than 50 people!  So when Roger and Amy suggested we go out to lunch the Friday beforehand, I didn’t think anything of it.  I mean, I was a bit confused when Roger told me he would be heading to Vermont on vacation that day but was coming all the way to our work just to have lunch with us first.  I was thrown off by the fact that he said he HAD to tell us some news this week, and didn’t want to talk about it on the work campus.  That lead me to jump to the conclusion that he was going to quit, and planning to give his two weeks notice on Monday.

When Amy and I got to the restaurant and I saw my retired co-worker’s car at the restaurant I thought it was a crazy coincidence.  Then I was confused when Amy walked right past the hostess, until I saw the ladies from my old team at a table with blue “It’s a boy” balloons and tablecloths.  What a complete surprise!  It was a lot of fun getting to hang out with all the women I don’t get to see on a regular basis anymore!

When I left the shower they had me take the “It’s a boy” balloons back with me, so I decided rather than bring them home that I would put them in my cubicle.  I hadn’t told most of my co-workers the gender yet, so I thought it would start some conversations.  Well, boy did it start some conversations!  Many people didn’t notice the balloons until Monday – and I happened to have a doctor’s appointment that morning, so I got to the office late.  This prompted a large group of people to believe that I had already had the baby!  Imagine their surprise when I came into the office later that morning…

After all the shenanigans from the first shower, I wasn’t positive the second one was real at all, or just a decoy.  But the second shower was massive!  Amy and Roger invited over 50 people to eat cake to celebrate!  The people who hadn’t seen the “It’s a boy” balloons received the news via the decorated cakes, and giant blue diaper cake that my manager made for me.  It was a great time, and so sweet of them to throw me another party!

The final shower was this past Saturday and my sister flew in from Colorado to host the party with my mom.  It was both friends and family and I really hope everyone had a good time!  They played a game where you had to make a baby out of play doh, and I got to vote for my favorites.  The entries were hilarious.  Among the sculpted babies were a donut (food baby), Dany (fur baby) and a starfish (I’m not really sure it was even a baby).  It cracked me up.

Well thanks to all my thoughtful friends, family and co-workers I have LOTS of thank you notes to send!  I decided to whip up a bunch of cards using the baby’s ultrasound photos to make things a bit more personalized. 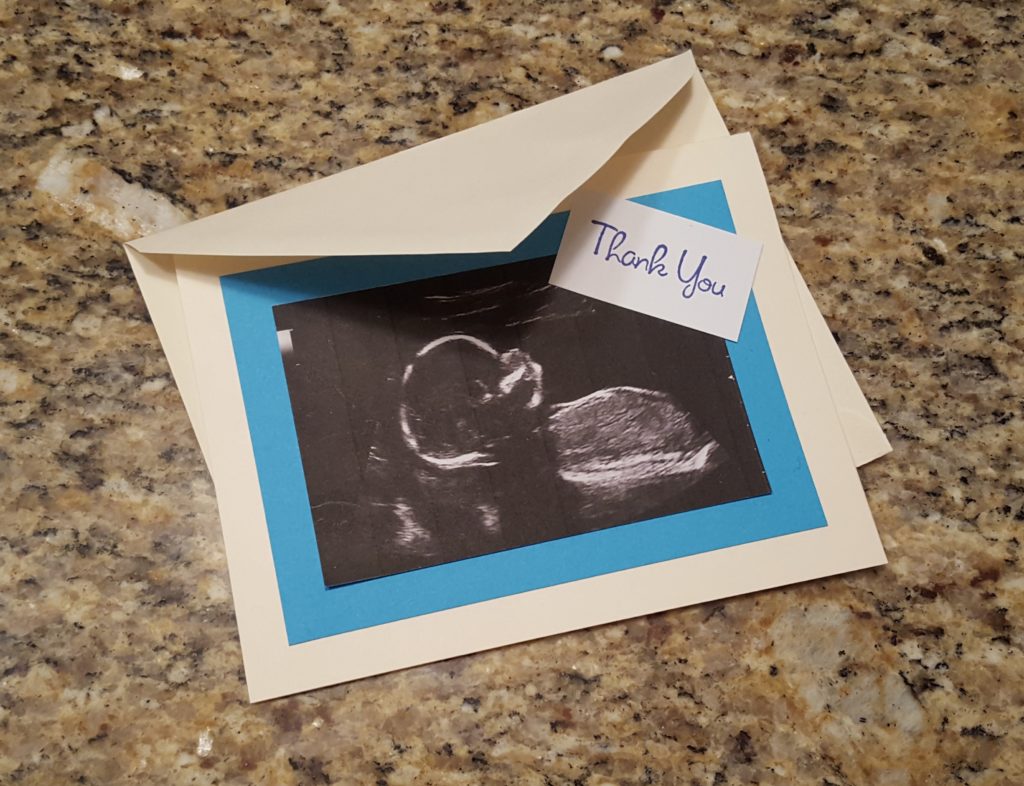 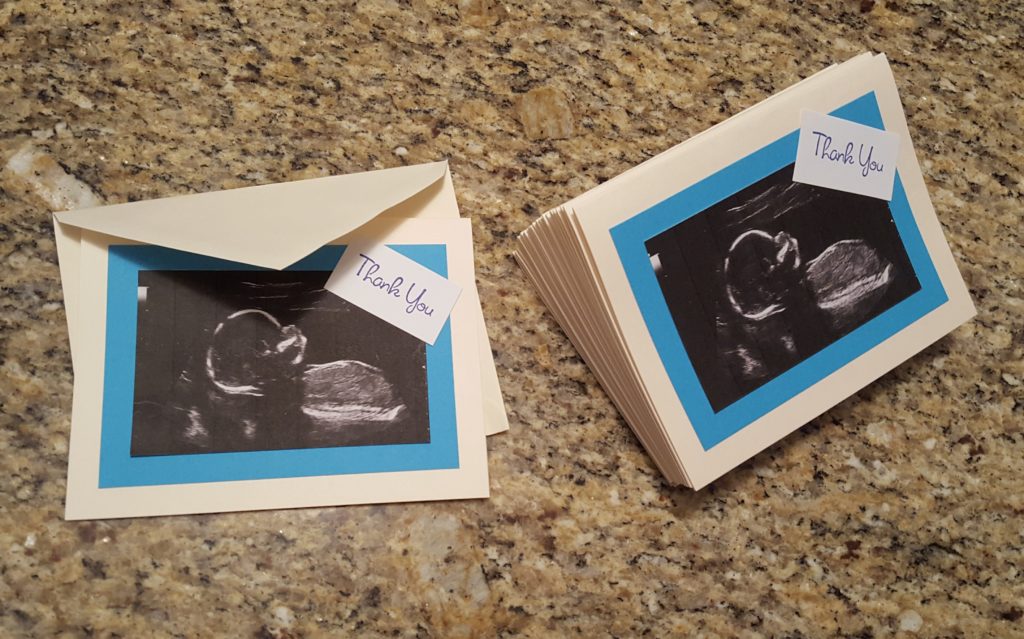 And I just wanted to shout out to my dear friends Maren and Matt and their new bundle of joy!!