Posted on December 9, 2019 by lexicolton

Tomorrow is our holiday pot luck at work and I’ve been debating what to make.  I want to make something vegetarian, but that also might be appetizing to non-vegetarians.  Since lots of people want to try Impossible Meat I decided to make my vegetarian version of shepherd’s pie.  I love shepherd’s pie.  I make a delicious non-veg version of shepherd’s pie using worcestershire sauce as flavoring.  Until I became a vegetarian I didn’t realize that worcestershire sauce is made with anchovies.  Anchovies are fish (in case you didn’t know).

Can we step back for a second and discuss this whole vegetarian thing?  It seems to confuse people, and honestly used to confuse me quite a bit when I wasn’t eating vegetarian.  Here’s your vegetarian primer from a (current) vegetarian.  Vegetarians do not eat meat.  That includes fish.  If you eat fish you are called a pescatarian.  Vegetarians generally do not consume anything that comes from a dead animal.  For example, chicken broth, fish stock, beef boullion.  Are you with me?  Okay here is where things start to get confusing.

What about products created directly from byproducts of the meat industry such as lard or gelatin?  Yeah, those aren’t really vegetarian either.  (Goodbye marshmallows.)  I only realized this when I noticed the “vegetarian refried beans” sitting in the grocery store and discovered the non-vegetarian ones were chock full of lard.  Okay, then what about stuff like sugar, which is not made directly from animals but uses the bones of dead animals in its processing?  I think the only people who really know about that process are vegans (and me apparently) so I think vegetarians are okay with refined sugar since it doesn’t say “may contain bone char” on the packages.

Okay we’re almost done.  The last thing that confuses me is the term “ovo-lacto” vegetarian.  This means a vegetarian who eats eggs and dairy.  This is what people generally mean when they say vegetarian.  I actually used to think the distinction between vegans and vegetarians is that vegetarians consume dairy and eggs and vegans do not.  While that is generally true it is not 100% accurate.  What I discovered is that many of my Indian friends consume dairy but not eggs or vice versa (or don’t consume either) and still call themselves vegetarian.  Vegans do not consume eggs and dairy since they are products that are created by animals, even though the creation of these products may not take the life of the animal.  Honey is also on the vegan do not eat list for the same reason.  So far I haven’t met a vegetarian who doesn’t eat honey.  (I will stop here on the vegan commentary because the different types of vegan are equally confusing and I am not vegan myself.  You can amuse yourself with the wikipedia page on veganism which is probably much more accurate.)

So where do I stand?  I am currently a vegetarian.  Specifically I am an ovo-lacto vegetarian, which is what most people mean when they say “vegetarian”.  Everyone has their own reason for vegetarianism, and for me it is environmental impact.  It takes a lot more resources to raise meat for consumption than plants.  Plus the methane from cows is a huge contributor to global warming.  Unfortunately the dairy industry is as bad as the meat industry in terms of environmental impact (and really is just a feeder into the meat industry since cows must give birth to produce milk).  So I’m a hypocrite since I’m not yet willing to give up dairy products.  One step at a time I guess. 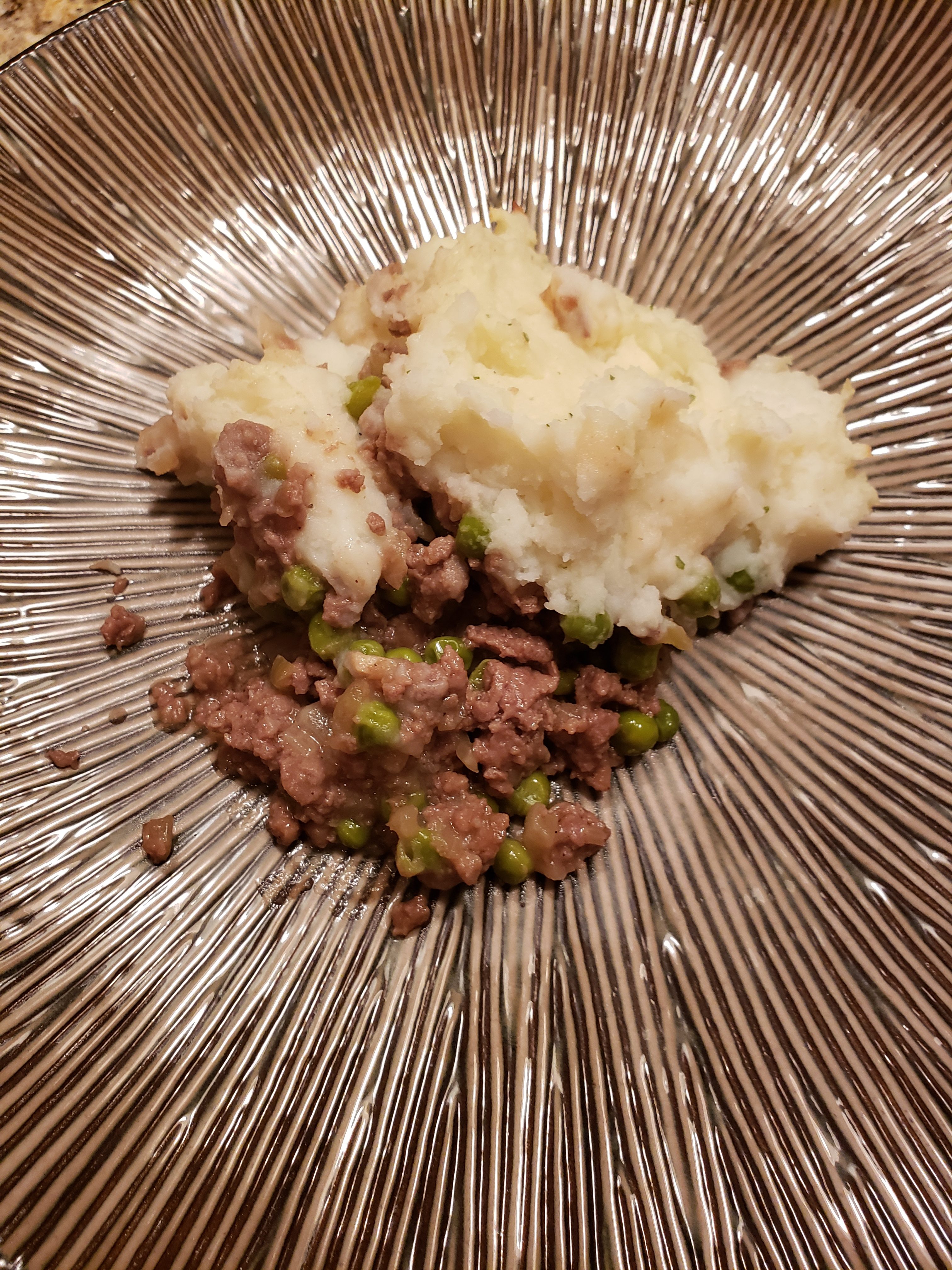 Brown meat in a pan with the onion on medium heat.  When meat is brown and cooked through, sprinkle soy sauce on top of the mixture and stir to incorporate.  Add peas (or corn if desired).  Add half of the vegetable broth, cover, lower the heat to low and let simmer for 15 to 20 minutes.  Continue to add more broth periodically so mixture stays moist.  While beef is simmering prepare the mashed potatoes according to package directions.  After 20 minutes is up, pour beef mixture into a 9.5″ pie pan.  Top with potatoes.  Bake in a preheated 375 degree F oven for 30 minutes until tops of potatoes start to crisp and the filling is bubbling. 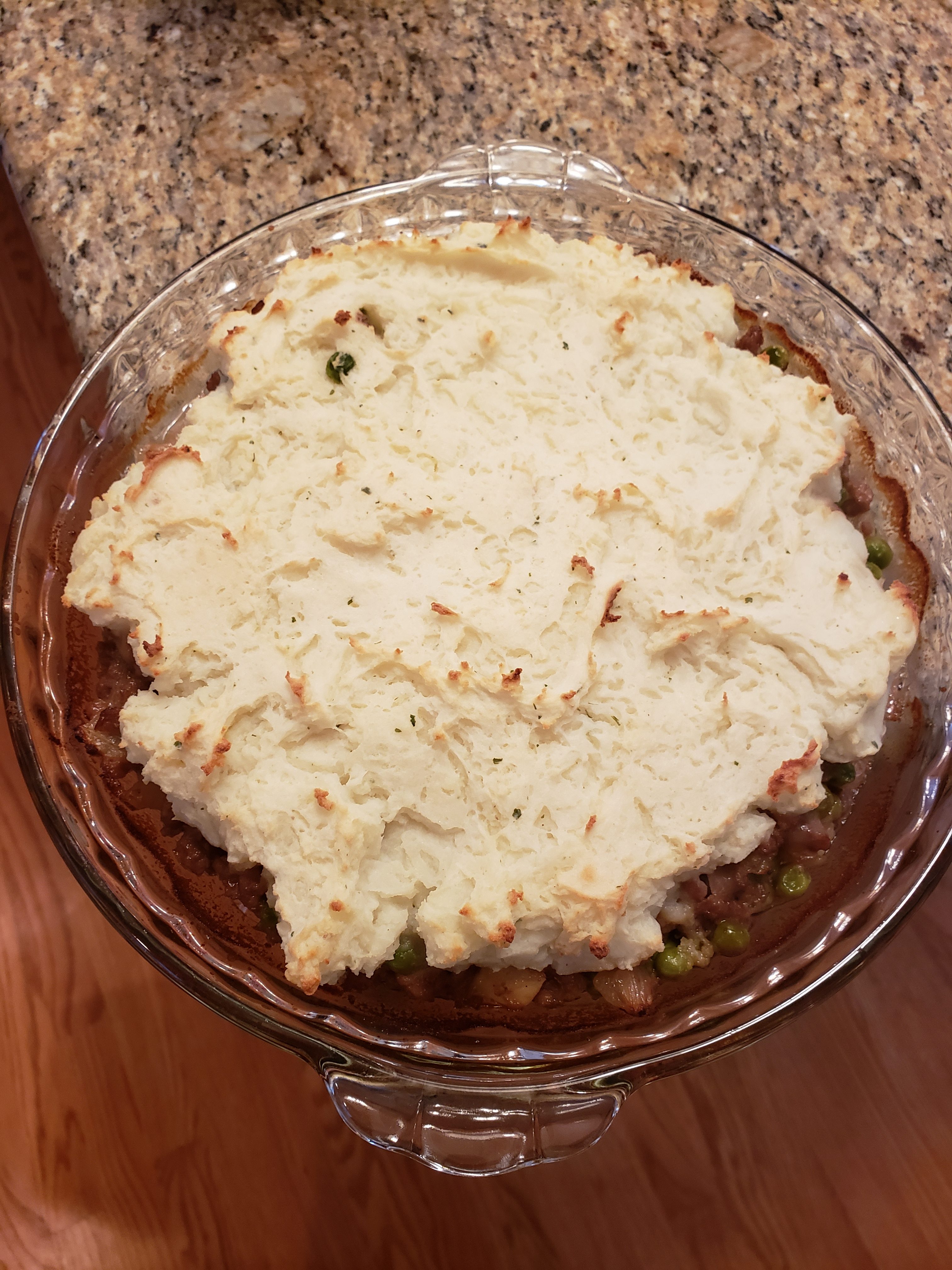 2 Responses to Vegetarianism for Dummies