Well this is it.  Will and I decided to try and start potty training Julius this weekend.  We’re sick of washing diapers I guess.  Plus he really hates diaper changes and that has lead to more rashes lately.  Poor guy.  We’ve told him that this weekend he gets to be a “nunu” (naked) while he potty trains.  He seemed excited at the prospect. Who doesn’t want to run around pantsless all day?

For the last few weeks Julius and I have been making muffins on Sunday or Tuesday mornings.  We’ve made chocolate chip zucchini, chocolate chip banana, blueberry and apple muffins.  They are all delicious.  I’ve been trying to make them slightly healthier (picture me saying that in air quotes) by using this cool article from King Arthur Flour on how to cut down the sugar in muffins.  It’s a great article, and very scientific.  The gist is that you can usually use half the weight of flour in sugar (maybe a bit less if you have other sweet things flavoring the batter) without compromising the texture of the muffin.  Julius can’t tell the difference when we lower the sugar and is constantly asking for “muthins”.  We’ve been reading If You Give a Moose a Muffin the sequel to If You Give a Mouse a Cookie which he refers to as “Moose a Muthins”.  It’s my current favorite word in Julius’ vocabulary (maybe second favorite to “tutu”). 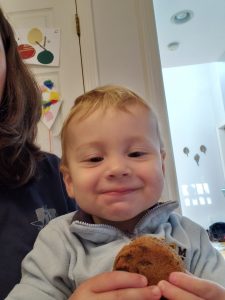 I’m feverishly working on a present for Julius’ birthday.  I decided to make him a play kitchen and some play food.  When I decided this (about 6 months ago) it seemed like I had plenty of time.  Unfortunately, several months of procrastination later and I’m starting to run out of time!  You may be thinking, “but you have a whole month!”  You’d be right about that, but this particular month is filled with Halloween, the medieval party and all the planning for Julius’ 2nd birthday party!

Despite my busy-ness (or maybe because of it) I’ve still made time for a few quick crafts.  This one was inspired by Julius who was constantly taking all my earrings out of the drawers and losing them.  He motivated me to reorganize my jewelry cabinet and add another earring rack.  The earring rack I made earlier has completely run out of room, and has gotten me frustrated, because there is no way to use earrings with backs on it without taking it off the wall.  This new holder made entirely from scraps, has worked amazingly well and it only took me about 30 minutes.  I wish I’d made one years ago! 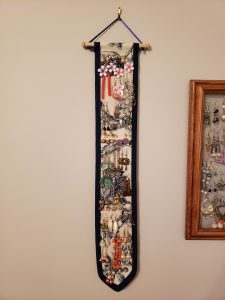 2 Responses to Hanging Out