Nobody Likes a Wet Bum

Posted on February 5, 2018 by lexicolton

Julius is becoming much, much less of a squish and much, much more of a tiny person.  In fact, I’ve almost entirely stopped calling him “squish”.  Not only because he is less squishy but also because it seems he is now listening to me very attentively.  I don’t want him to grow up thinking his name is Squish – I think that’s a name I’d better erase from existence before he learns to talk.  Instead, I’ve been calling him mostly Juli-ouli-us.  In addition I’ve recently discovered that he likes his name.  Whenever I refer to him as Julius he puts on a huge smile, especially when it becomes the lyric in a song.

He has developed a lot more control over his hands and arms, and is now happily grabbings things and putting them in his mouth.  On top of that, he has been smiling and laughing!  I discovered a couple weeks ago that he is extremely ticklish.  He also ‘talks’ a lot more.  My favorite thing that he does lately is he babbles and coos quietly to me while looking at me in the eye.  I call it whispering sweet nothings.  It is completely adorable.

Frequently he’ll do a lot of these adorable things while he’s on the changing table.  He seems to almost always be in a good mood when we’re changing his diaper.  I guess it’s because (as we frequently tell him) nobody likes a wet bum.  The changing table itself was given to us by my co-worker since his grandson has outgrown it.  It has been great for us to store all our diapers, diaper covers, wipes, diaper pail liners, etc.  Plus is really saves our backs when we’re changing him all the time!  My only complaint with the table is that I’d like a space to store diaper rash cream or spray for our cloth wipes on the top of the table for easy access.

To solve this problem, I decided to make a little fabric box to add on the side of the changing table.  The velcro and ribbon additions are used specifically to mount the box onto a changing table, but these can easily be omitted to form a basic storage container.  It was so easy to make I will probably create more of these in different sizes for other forms of storage!  The canvas really works nicely to stiffen the sides so they stand up on their own without interfacing.

** Skip this step for an ordinary box that you don’t intend to mount on a changing table. 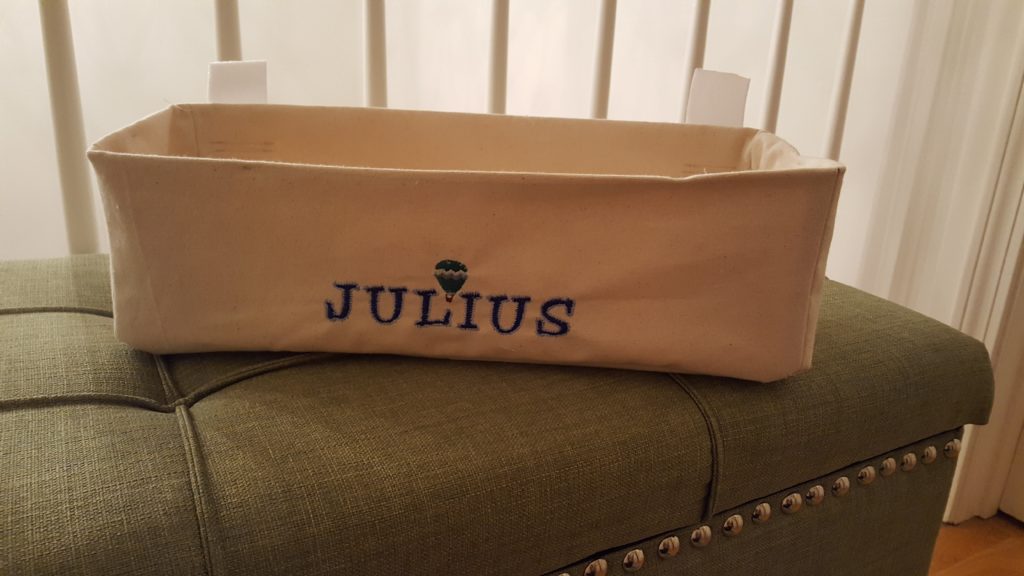 Here’s what the box looks like without being mounted.  Julioulius wouldn’t fit so I had to use his real name. 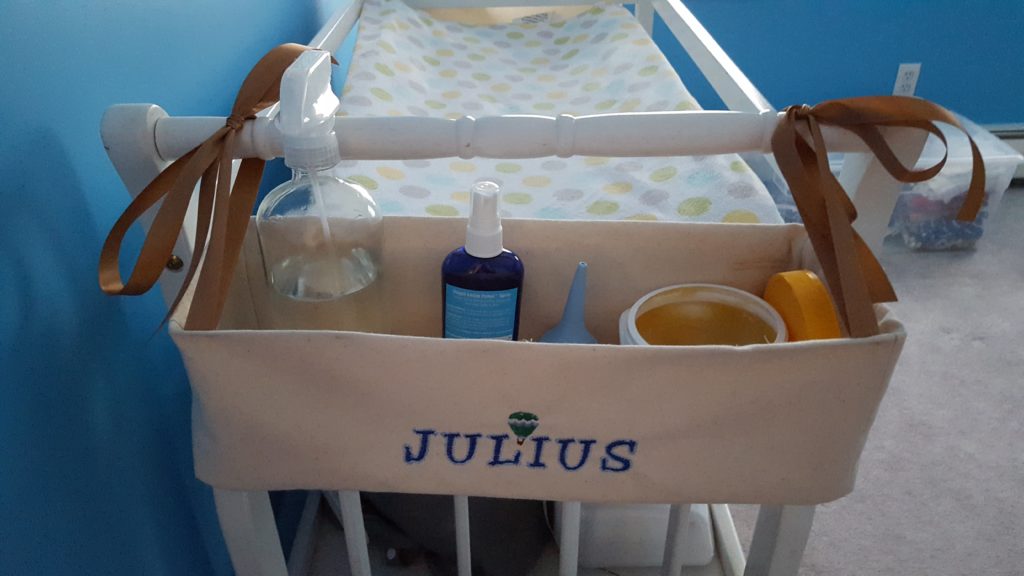