Well even though I’m in the second trimester, which is supposedly “the honeymoon phase”, I’ve felt worse than in the first trimester.  On top of the weird second trimester issues, I’ve had a lot of trouble motivating myself to do anything.  Normal things like cooking and cleaning have fallen to the wayside, and I’ve had a lot of trouble attempting to do anything worth blogging about.

Two weekends ago with Will’s help I managed to get the house cleaned to some level of satisfaction, but that was about all I did the whole weekend.  When I mentioned to Will that I hadn’t accomplished anything and was feeling lazy his response was, “you made a cake for your dog.  No one would call someone who makes a cake for their dog ‘lazy’.”  Point taken.  It was Dany’s birthday so I had made her a banana cake with peanut butter cream cheese frosting.  But I mean, that’s not human food so its not blog worthy… 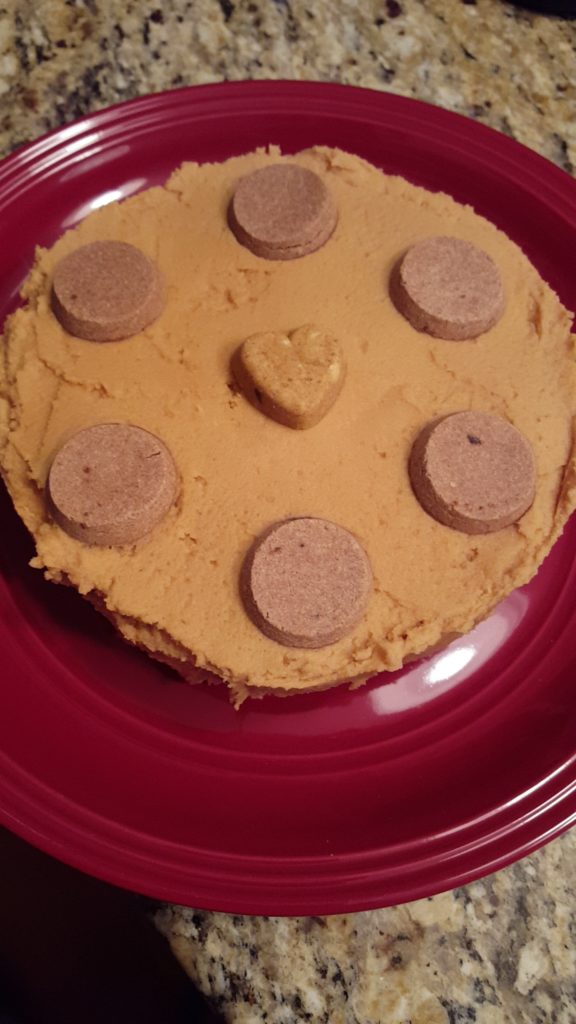 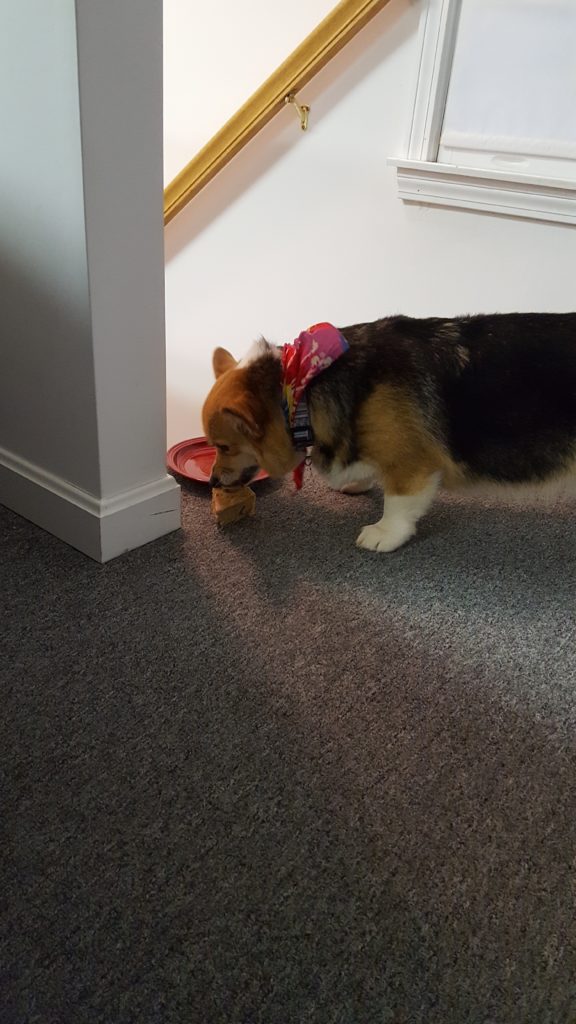 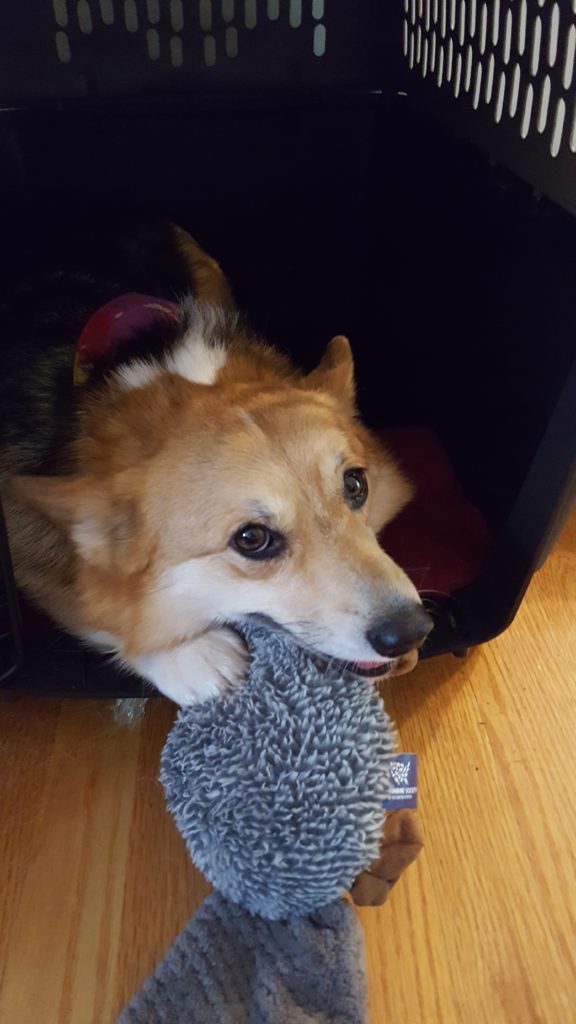 Birthday dog with her birthday gift!

On top of not feeling great I’ve got quite a bump now, to the point where I can’t zip my normal pants.  When I was in Nashville last weekend my mother in law offered to take me to Pea in the Pod to try on some maternity clothes.  Honestly I was very embarrassed about the whole maternity clothes thing so I was a bit hesitant.  But these clothes are more fashionable than my normal wardrobe!  So thanks to my mother in law and a friend’s hand-me-downs I’m now up to 3 pairs of pants!

Well even though the clothes at Pea in the Pod are amazing they are pretty expensive but I felt I could really use a few more tops and another pair of jeans.  So I decided to check out Savers.  My plan was to buy some second hand jeans and modify them to add a belly band for maternity.  Well the maternity jeans were actually CHEAPER than a normal pair of jeans!  Can you believe that?!  So I bought 2 pairs of jeans, 1 skirt, 6 tops, a dress and a prenatal yoga dvd for $61.  That is less than a new pair of jeans!

Despite my maternity wardrobe feeling nearly complete I bought a pattern for an adorable maternity dress quite a while ago.  The pattern is Kwik Sew K3486.  Well, speaking of thrift stores, I’m going to let you in on another secret of mine.  I buy most of my fabric at Savers.  Not just in the fabric section either – I tend to buy curtains or tablecloths and re-purpose them as long as they aren’t faded or don’t have any stains.  For this dress I actually bought a cotton shower curtain… The fabric was adorable and summery looking and it was made from a nice soft medium weight cotton.  The curtain cost me only $4.99 and the pattern was $11.99 for a grand total of$17.  Plus the dress only took me 6 hours to make!  It really was a quick sew!  I’ll definitely be using this pattern again!  Would you have guessed this came from a shower curtain? 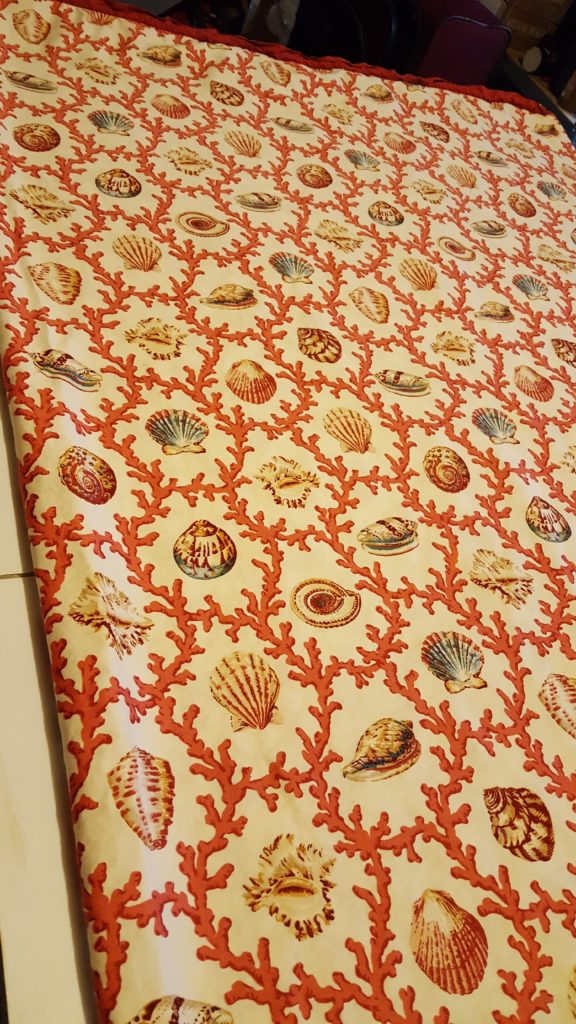 Shower curtain, complete with ruffles. But look how cute the pattern is! 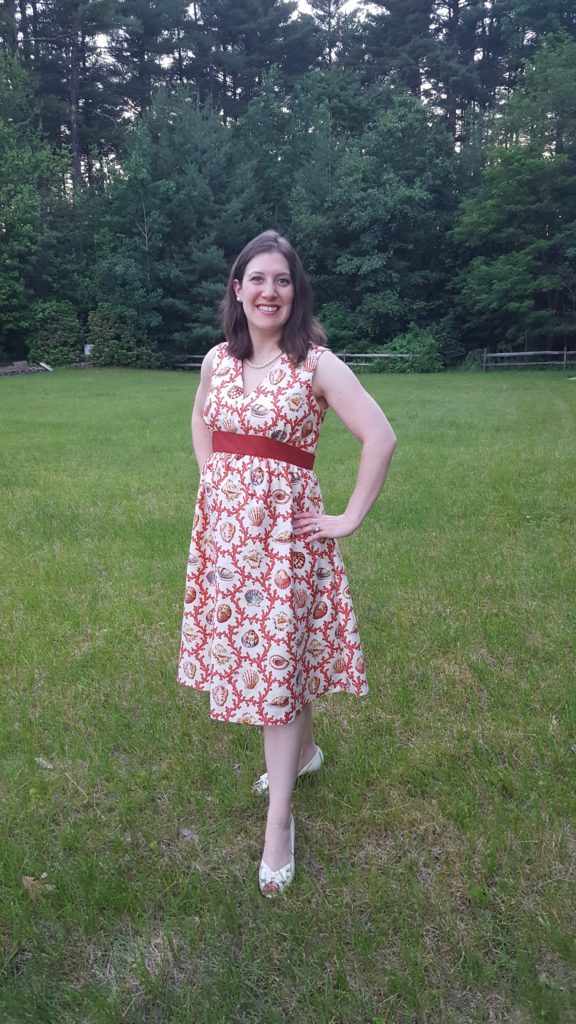 Can you believe this was a shower curtain?! 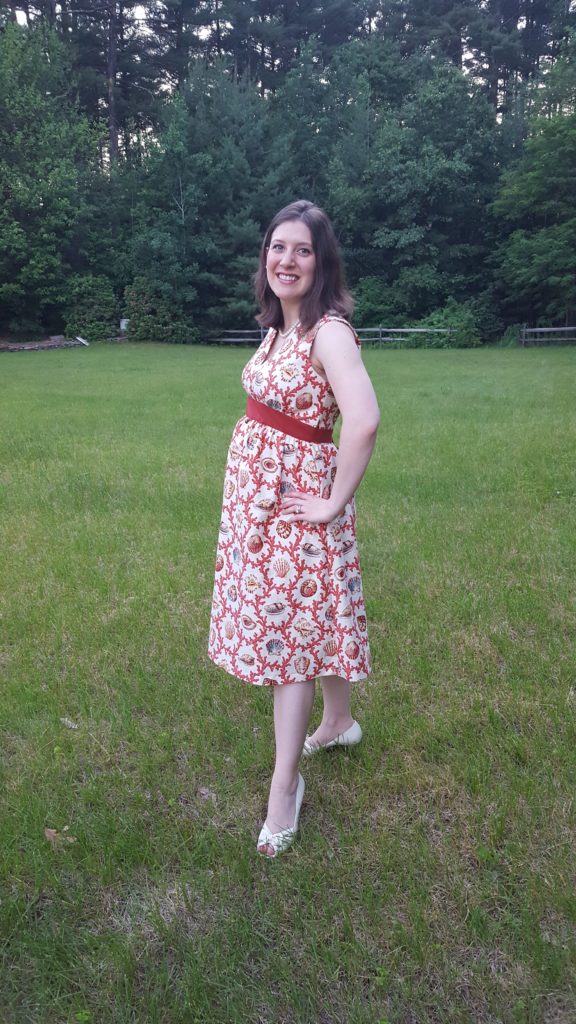 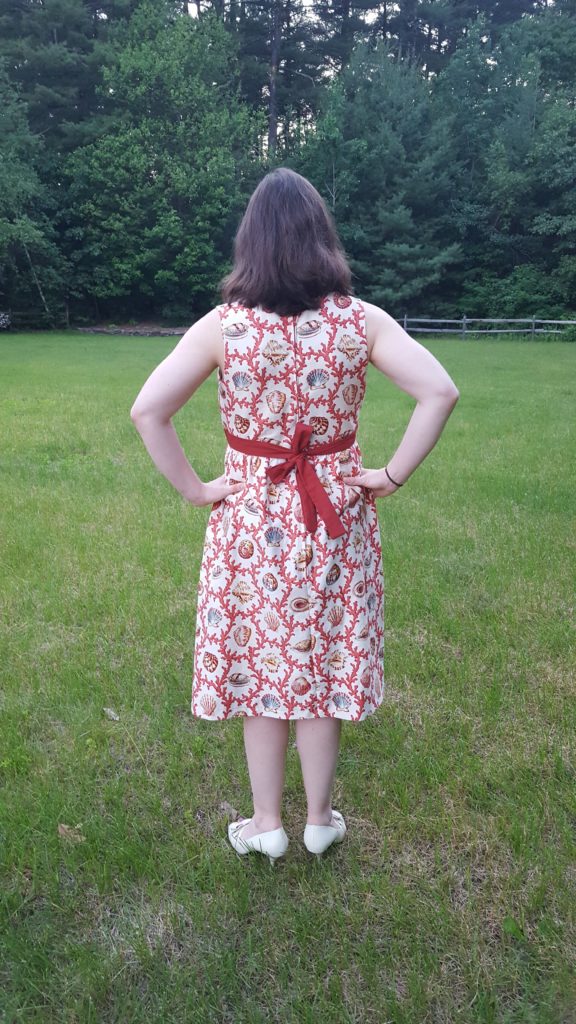 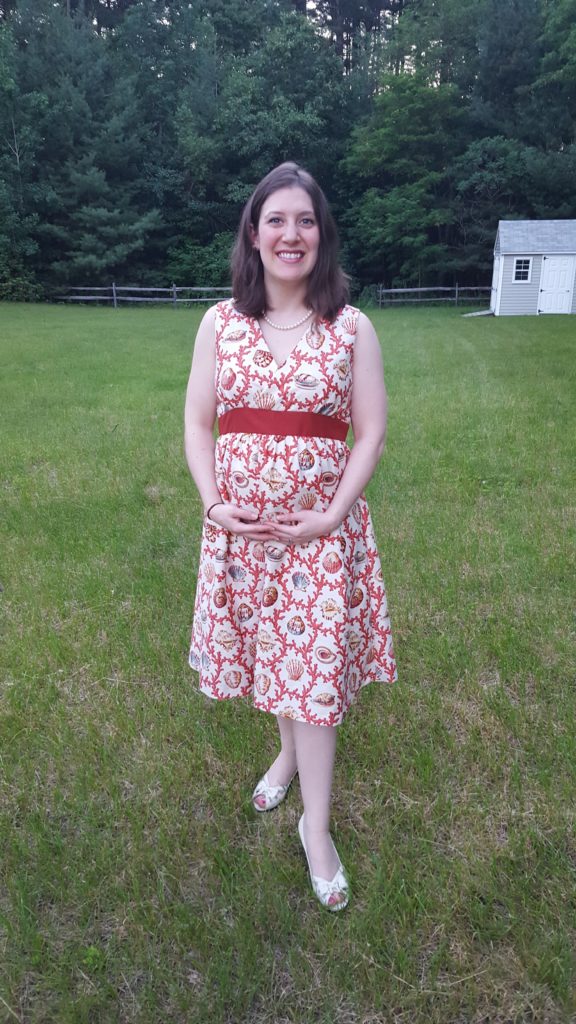 The dress hides the bump fairly well, until you do this. 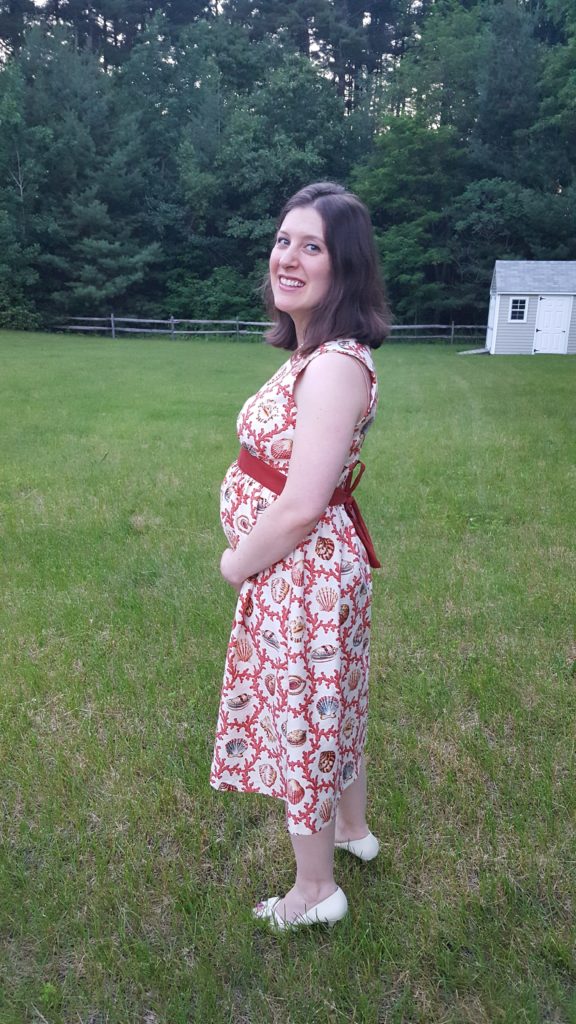 Just one more thing if you’ve gotten this far!!  We are having a Maker Faire at work and I’m going to bring in some of my best creations!  I need your help to decide what to bring in!  What are your favorite projects I’ve put up on the blog?

5 Responses to Shower Curtains and Ramblings