Hello dear friends!  What a beautiful weekend it was!  We decided to leave our houses and go to an outdoor public event for the first time in months!  Will and I decided it was time to determine how safe we felt at Davis Farmland – one of our favorite places of all time.  Julius had a great time, though he wasn’t as excited as we thought he would be about going there.  He told us “well I’m not too excited, but I am a little bit excited.”  Whatever that means, no one knows for sure.

Overall we felt fairly safe, and since they require masks almost every adult we saw had one on (with the exception of 1 piece of hot garbage).  Julius wore his mask the whole time (which made us feel better since we are still paranoid after all).  Will told me that Julius’ mask-wearing prompted an unmasked little boy that Julius was playing with to ask his mom for his mask.  Nothing beats that.

Okay so forget Davis Farmland, the real wildness is that I WENT GROCERY SHOPPING!  INDOORS!  It was the first time in 14 months that I have set foot inside a grocery store.  Can I tell you, it was weird… you all probably have seen the inside of a store in the past year, but this hyper paranoid hypochondriac has been avoiding retail since I found out I was pregnant.  It was surreal.  There were so many signs!   “You must wear a mask at all times” and “maintain 6 feet between customers” and “only 90 people allowed in the store at a time”.  I felt like Cillian Murphy in the beginning of 28 days later when he wakes up after the zombie apocalypse has ravaged the city and is quietly walking around and piecing it all together.  I didn’t know where to stand for the cash registers, I wasn’t sure how the deli worked anymore and I made awkward unintelligible chatter at the checkout people because I have only spoken to about 14 humans face to face in the last year.  But other than that it was great!!  I didn’t even have a panic attack!

All that progress aside, despite the CDC updates, I still have two unvaccinated children, and I can’t see myself hosting any indoor parties anytime soon, vaccinated friends or not.   Luckily one good thing that has come out of this horror show is virtual parties!  Sure, sure, compared to in person parties they suck.  But, I’ve seen more of my far away friends in the last year than I have in the last 5 years combined!  And think of the commute time you save for those of my friends who are “local”!  One of the best parties that works for the online format is board games.  While our entire collection isn’t available online, a great assortment of games are available on free sites like Yucata and Board Game Arena.  Since the beginning of the pandemic Will and I became paying members of Board Game Arena and I don’t think we’ll stop anytime soon.  Throwing a virtual board game party is the next best thing to live board games!  Read on below to hear about our latest adventure…

You all have heard about DanyCon, the family convention we throw for the Collins/Colton Family every year.  Since last year’s DanyCon was such a hit virtually, we knew we could scale the event easily without much extra effort.  So thanks to the pandemic we decided to host our first ever DanyCon and Friends!***

A Lexi party wouldn’t be complete without a theme.  Themes for virtual parties are rather loose, but I tried my best to tie it together.  For DanyCon and Friends, Will and I decided “carnival” would be the theme.  Our invite emails used carnival vernacular like “step right up” and “extravaganza”.  The virtual game rooms oozed theme.  The swag makes me think of a carnival every time I look at it. 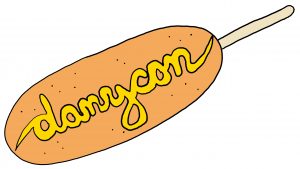 Could you guess the theme from this alone?

We learned what worked from DanyCon and did a slightly more stream lined version for DanyCon and Friends.  Instead of having folks learn multiple platforms we hosted the entire DanyCon and Friends on just Board Game Arena.  For communication we used Discord chat and voice channels only since we found video didn’t add much for DanyCon.  Though we initially wanted to have a multi-day convention, we decided that with two young kids one day was enough.

To register we asked people to do the following:

Sign up for board game arena
Sign up for discord
Reply to this email with the following information:

Are you a premium BGA member? Y/N

We then sent out a link that people could click to join Will’s discord server.  He granted access to the sites below when they joined.

For discord we created several channels:

#rules and recommendations – text channel that only Will and I could edit.  We posted the rules of the Con here as well as any updates as the day went on.  On this board we asked everyone to change their discord name on Will’s server to their real name to avoid confusion for everyone.  The only other rules were our normal board game house rules:

#LFG – text channel where you could post when you were looking for a game.

LFG – voice channel where you could hang out when looking for a game.  At the top of this channel we pinned a decoder ring with everyone’s name and their board game arena handle for easy access.  Premium users were bolded since some games require one person with a premium account to play.

10 different voice channels where guests “hung out” when they found a game to play.  Someone thought it would be neat to see which rooms were used the most often, but sadly we couldn’t get that info off discord.  I personally spent the most time in Pickle on a Stick through no choice of my own, and I don’t think I saw anyone in Churro ever.

What convention would be complete without side quests and prizes?!  I decided to send out bingo cards to everyone who registered.  I created the cards with this nifty site and sent out individual links to folks via timed email so they’d get the bingo card at the start of DanyCon.  Folks were instructed to email me with their line or full cards and I gave prizes (amazon gift cards) to the first 3 people who sent me their cards, plus the only person to complete a full card. 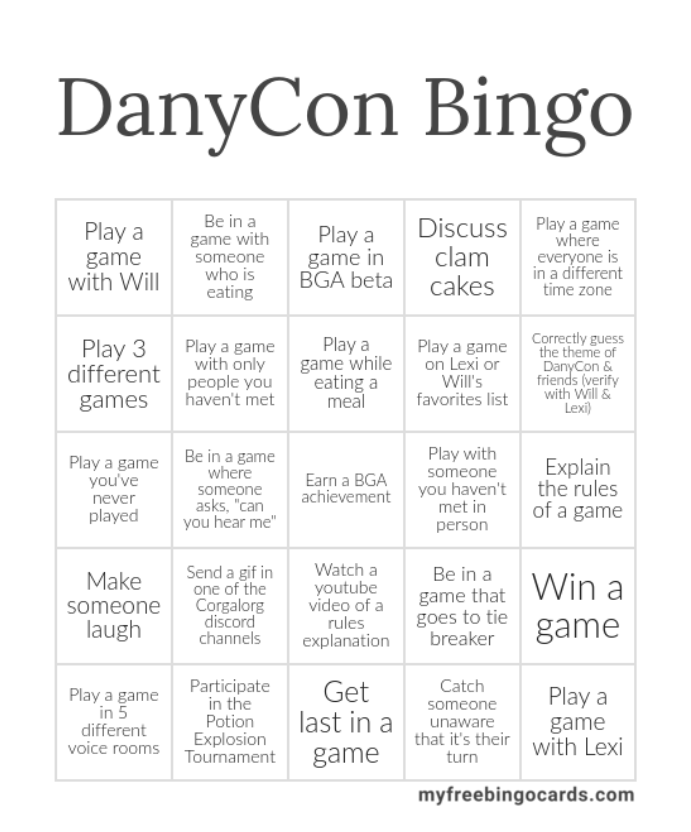 On top of Bingo, I was looking to create some worthy adversaries to fuel my Potion Explosion addition.  (Hands down this is my favorite game on Board Game Arena.)  I had folks sign up for the tournament and then we created a not quite round robin bracket and picked a premium BGA member in each game group create a game to play.  We played asynchronously and actually finished the tournament later in the week.  This meant we didn’t take any precious time away from real time board games during DanyCon.  The winner (Erin) took home an amazon gift card and was declared the Potion Master. 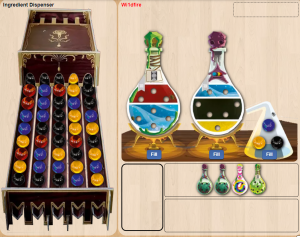 I love to give out swag, but this time around I couldn’t make swag for all the people we invited and still be sane.  Instead we decided that giving a pin would be a fun idea since Will and I love silly pins.  Originally I wanted to do the usual Dany silhouette in red and white stripes like a carnival tent, but it looked way too much like the Japanese Rising Sun flag so I scrapped it.  Instead we decided we’d keep the Dany silhouette for our family DanyCon.  In a stroke of inspiration I sketched up a corn dog, with some DanyCon mustard.  We used Wizard Pins to create our pins and we had a great experience!  The pins are going out via USPS tomorrow.  (Sorry to ruin the surprise!) 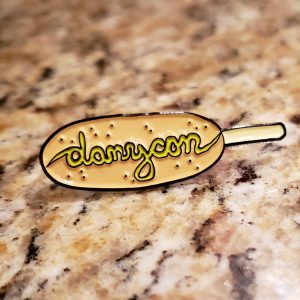 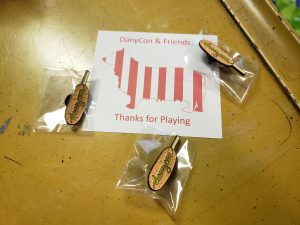 Overall it was a GREAT time, and a perfect end to my last week of maternity leave. I learned some games, played some old favorites, enjoyed some fun party games, and made some new friends.  We had around 30 people join us for games and fun, and could easily have accommodated many, many more.  My only regret is that I didn’t get to play a game with everyone who came!  We will definitely do this again soon!

***If for some reason you didn’t get invited this time, please let us know, it is because either we meant to invite you but were too sleep deprived with an infant when we made the invite list or we just didn’t realize you liked board games.  (In all seriousness, because of the number of friends we mistakenly left off this time, we plan to make an email distribution for next time.)

This entry was posted in Parties. Bookmark the permalink.

4 Responses to DanyCon and Friends