This year for Christmas Will, Julius and I are the only ones who will be at my parents house in RI. We usually do a Secret Santa type thing but we’ve added different twists over the past few years.  Two years ago everyone joked about how we just basically bought exactly what each person asked for and there were no surprises.  Then last year people didn’t want to do it since everyone was remote.  This year I proposed a new twist.

The idea was that we could only purchase second hand gifts or make gifts.  Because thrift stores have a rotating stock of items this meant you were pretty much guaranteed to get a surprise.  My brother (accidentally) dubbed the new gift exchange “Trash Christmas”, which I thought was hilarious.  To prevent anyone from getting actual trash, everyone in the family had to post a public “wish list” with really vague things they enjoy that might be found at a thrift shop. My example was “Corgis, almost anything nerdy, robots, kawaii characters, cook books, crafts of all kinds, flannel, sewing, sci-fi and fantasy novels.  Renaissance or medieval anything.  Party supplies like beautiful serving platters.   A good can’t think of anything gift for me would be to mail me a bunch of fabric from the thrift store.  I’ll find something to do with it.”  Later folks started adding their favorites types of homemade snacks, which I thought was a great addition.

Tonight we are going to have a Google Hangout party to open gifts and play some games.  I made part of my gift, but since I don’t want to reveal anything to the gift giver, I’ll save the post for another day.  Instead I’ll finally show you our Christmas card! 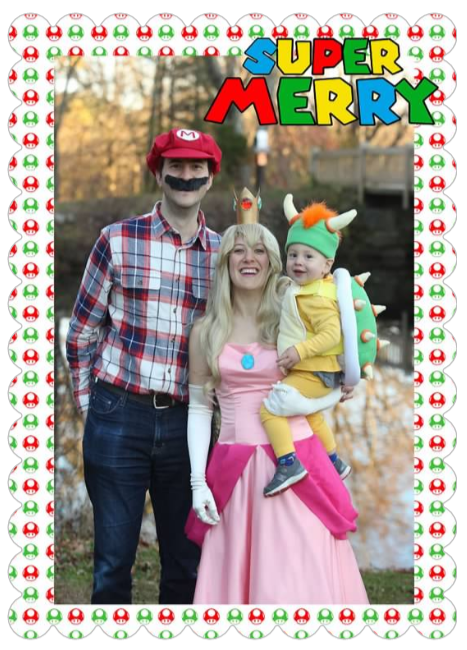 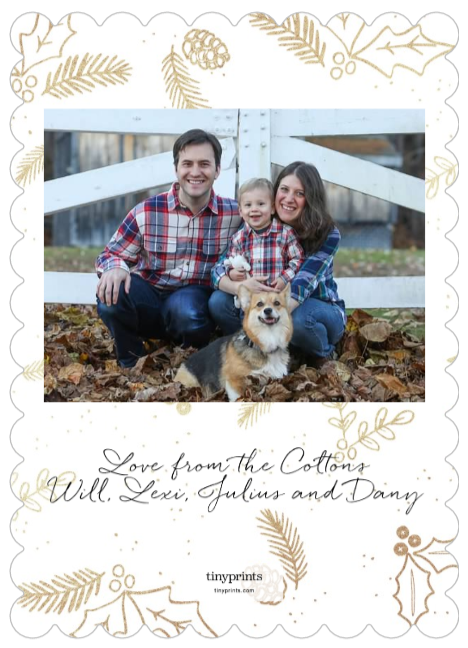 As you know we went as Mario, Peach and Bowser for Halloween.  We had a fabulous local photographer (Shayna Lee Photography) take our photos again this fall and we warned her we were going to want a couple in our costumes.  On the day of the shoot Will and I were so discombobulated that we somehow forgot to pack Will’s Mario costume (though somehow we remembered the hat and mustache).   Luckily Will’s outfit for the shoot had lots of red and blue in it so we deemed the costume “fancy Mario”.  The entire shoot came out fabulous and it was hard to pick our favorites, but this is what we came up with for our Christmas card.

We started with a custom theme on tinyprints and created the front of the card using paint.net.  If you ever want to send out Mario-looking Christmas Cards, I’ve included the template and instructions on how to use it.  Disclaimer: my blog and these blog posts are in no way affiliated with Nintendo and our cosplay and Christmas card are merely paying homage to the original characters through my own original interpretation and parody.

I wish you all the happiest of holidays!