Posted on September 2, 2019 by lexicolton

We’ve spent the last few days at Will’s grandparents’ house in east Tennessee celebrating Grandaddy’s birthday.  Will has a large family and Julius loved the constant attention he received.  Grandmother joked when we left that we were going to have to invite the neighborhood over when we got home to give him the same amount of attention.

Julius has been picking up words almost daily it feels like.  We can’t always understand him, but once he says it ten or twelve times we usually get it.  He can even tell us all his daycare friends’ names.  The other day Will asked him what his best friend’s name is.  He replied “Sheepy” (his favorite stuffed animal).  Will laughed and clarified with “who is your baby best friend?”  He then responded “Baby Sheepy”  (which is the name we use for the mini version of Sheepy).  Will had to ask who his “daycare best friend” is to get the final answer of “Connor”, his buddy at daycare.  I cracked up when I heard that.

As I think I’ve mentioned, I’ve been modifying some of our favorite recipes to work with our slowly developing vegetarian diet.  We have been getting LOTS of peppers this season from our CSA (awesome) and stuffed peppers is one of our favorites.  Let’s be honest though, they’re just a pile of ground beef.  Well I started making this super easy recipe that Will declared “at least as delicious as the original”.  I hope you like it too.  The best part?  It tastes even better the second day.

Preheat oven to 350 degrees F. Saute onion in olive oil until softened and fragrant.  Add beans and tomato sauce, cover and simmer for 30 minutes.  Cut tops off peppers and discard the stems, ribs and seeds.  Sprinkle cheese in the bottom of each pepper, fill halfway with bean mixture, sprinkle more cheese on top and fill to the top with more bean mixture.  Top with cheese and the pepper top. Cook for 30 minutes, or until tops of peppers are slightly brown and peppers are soft. 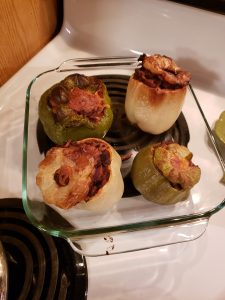 Peppers ready to be cooked 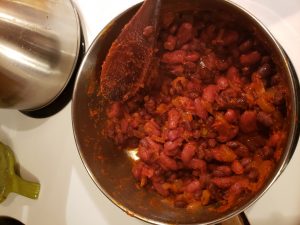