I spent the past weekend doing a one day version of an online scavenger hunt that my sister in law Erin has been doing for years, called GISH.  It was lots of fun, but also lots of work!  You’re required to do/create lots of silly stuff and post links to videos and pictures for “points”.  The points don’t really matter it seems, but I guess the best photos/videos get street cred.  I picked multiple activities that involve making masks because conveniently I had made mask patterns a couple weeks ago.  I don’t know about you, but I really do think this style of mask is going to come into fashion any day now – and you saw it here first! 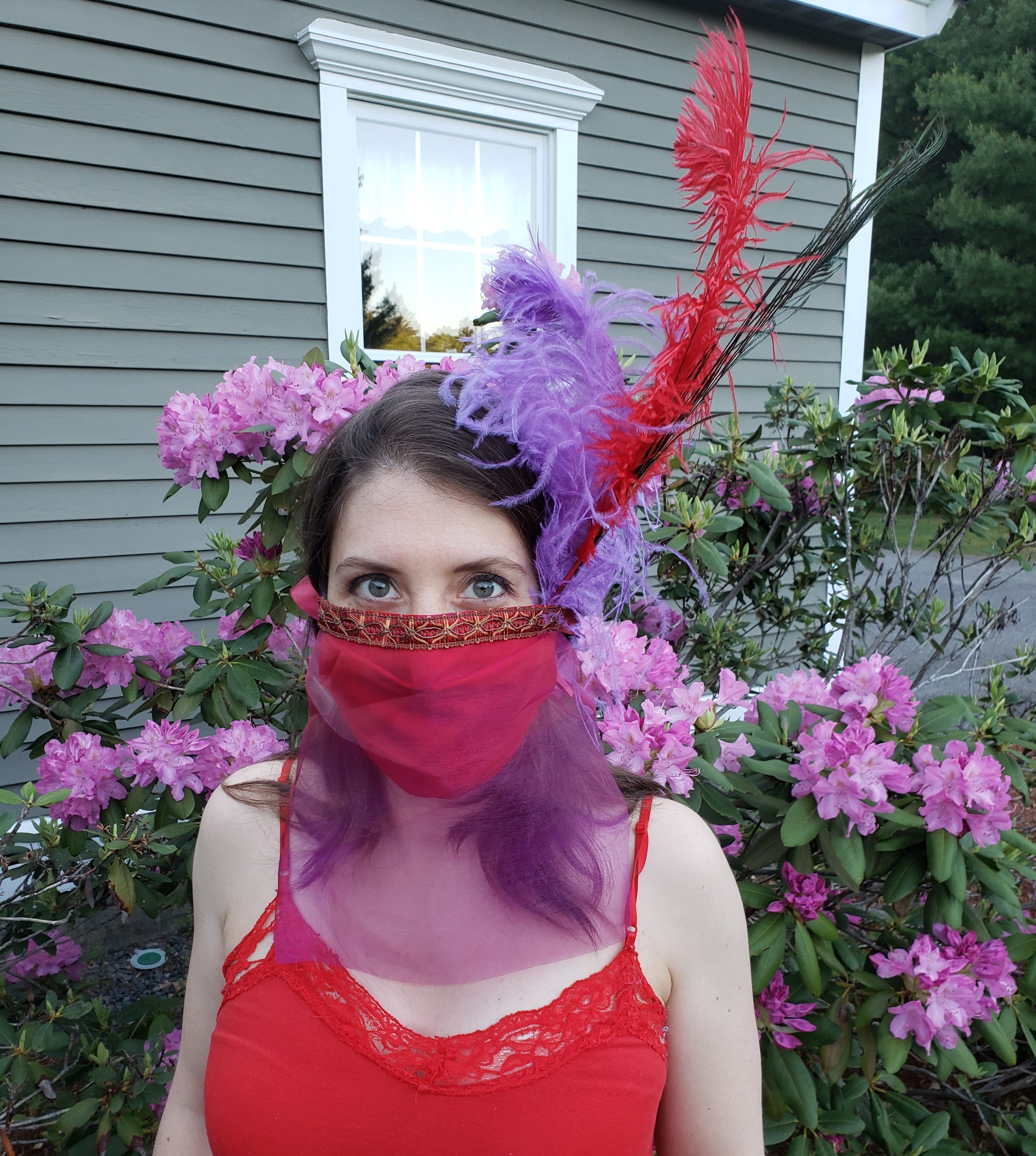 My high fashion mask – for all those socially distanced balls you’ll be attending.

Julius loved watching all the videos from the competition – but this one he asked to watch about 100 times calling it “the swingy thing”.  He got to see the whole thing live too, and was very disappointed that after his nap I wouldn’t do it again.  He did seem very confused about the reason I was baking a cake and letting him eat it though.  Julius asked multiple times “is it my birthday?”  To which I had to explain that we were just having a cake for fun.  He got more confused when I showed him this video we made even after I assured him it was not my birthday.  My favorite thing about Julius right now is the phrase “this is SO MUCH FUN” which he squeals with delight in his adorable little toddler voice whenever we are doing something that he thinks is grand (being made into a human burrito, being pushed around on the dog footstool, going in the paddleboat etc).  It is adorable, but we have not managed to capture it on camera yet.

Speaking of fun – I finally held another ladies’ night!  This one was completely virtual, and involved a craft that I was able to mail and which each person could accomplish without any specialized equipment.  It also involved things I already had around the house, so I didn’t have to order anything to make it possible.    Though it took more preparation beforehand for the craft, it was infinitely easier because I didn’t have to plan food.  I did plan out my own personal beverages though and they were well worth it…

I wanted the invitations to be slightly mysterious and keep the craft a surprise.  I didn’t tell anyone I was sending the invitations out, so it was fun to get messages from people when they received them!  You’ll notice I didn’t put an RSVP because I’d already done the prep work and it didn’t matter for logistics how many showed up (though I hoped everyone would of course). 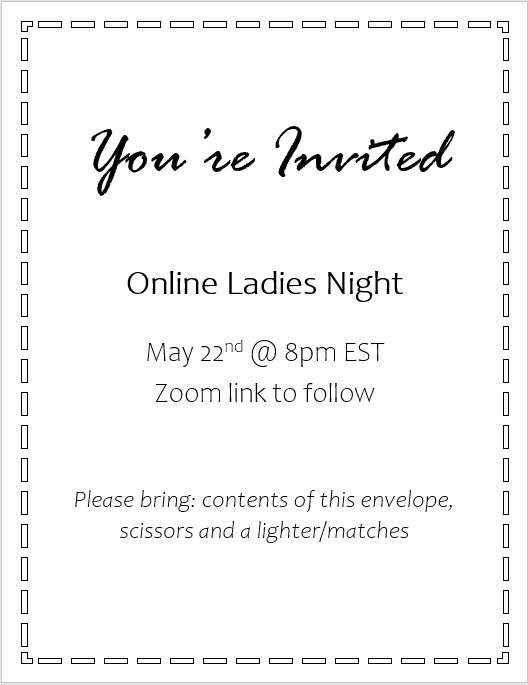 I made up mailers for each invitee (19 total) consisting of the craft packet and invitation.  The weight of each in an A2 envelope, and accounting for hand sorting required because of the lumpiness from the beads, required $.76 of postage (in 2020).  I slapped on a postcard stamp and a first class stamp because that was all I had, wasting 14 cents a card!  A small price to pay to keep the postal service going!

For each guest you will need:

Package beads and cord up in a zip lock bag, place in A2 envelope with invitation.  Affix postage, accounting for hand cancelling for non-machine sorting.  In 2020 this was 76 cents.

I decided to use Google Hangouts instead of Zoom because I’ve been using Hangouts for years, and it is free.  For me the audio and video was great, but most people are more familiar with Zoom at this point and it made things slightly complicated.  I’m not sure what I’d use next time. 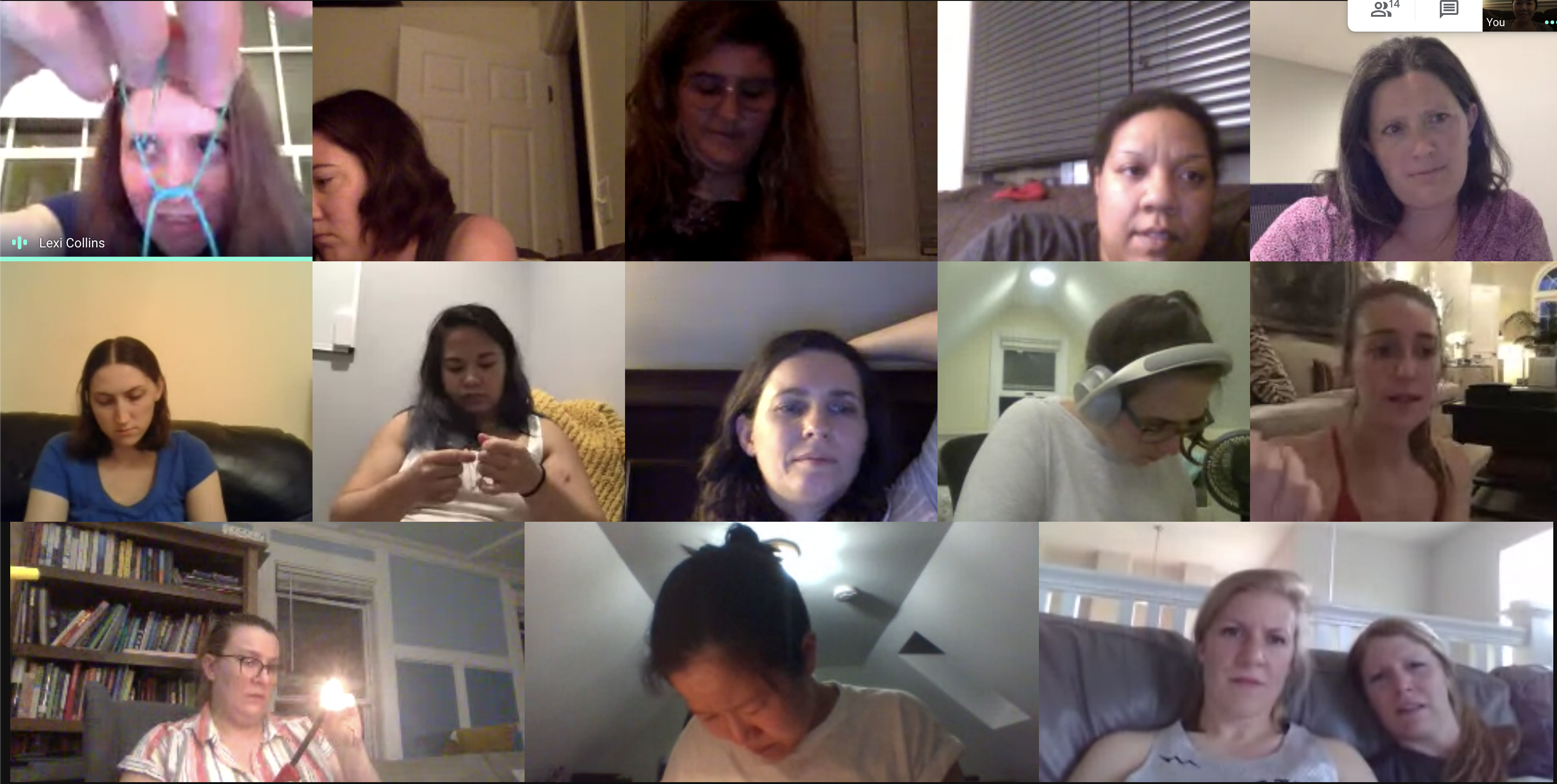 Everyone busy at work, while I share my knot. Note Emma’s casual use of fire looking badass. Thanks to Ka for this photo!

We always have wine at ladies’ night so I encouraged everyone to BYOW this time.  I chose a couple of mocktails that were downright delicious.  The first one I whipped up right before the party started, the other I made in advance and stuck in the fridge until my pina colada ran out.

I lead everyone through a tutorial of how to make a Morse Code bracelet.  It took about 2 hours total, and I’d guess about 75% of the people finished it on the call.

Here’s my written tutorial if you want to try it yourself! 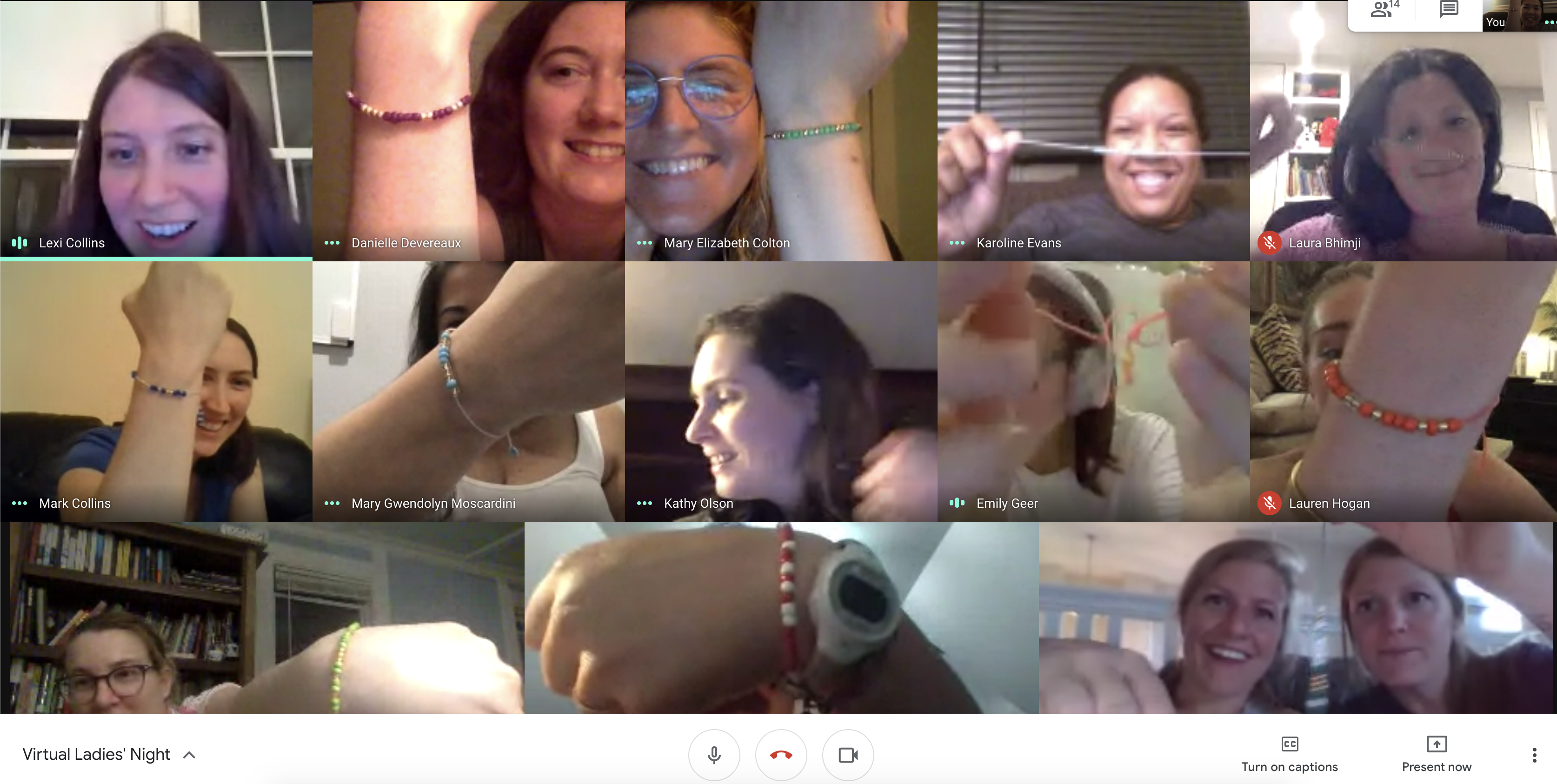 Everyone holding up their finished (or sort of finished) bracelets!

It was fun to see everyone, and I think most people had fun doing the craft.  I’m happy so many people turned out for it!

The only downside is that there wasn’t as much chatter as usual for a ladies’ night.  It was mostly a craft project and there were A LOT of people on the call.  (It’s hard to have side conversations on a conference with 12 people.)  It sort of reminded me of a paint nite, where you don’t have much time to side chat because you’re so busy finishing your painting.  Several ladies stayed after the craft to chat and that was definitely the most enjoyable conversation of the night. 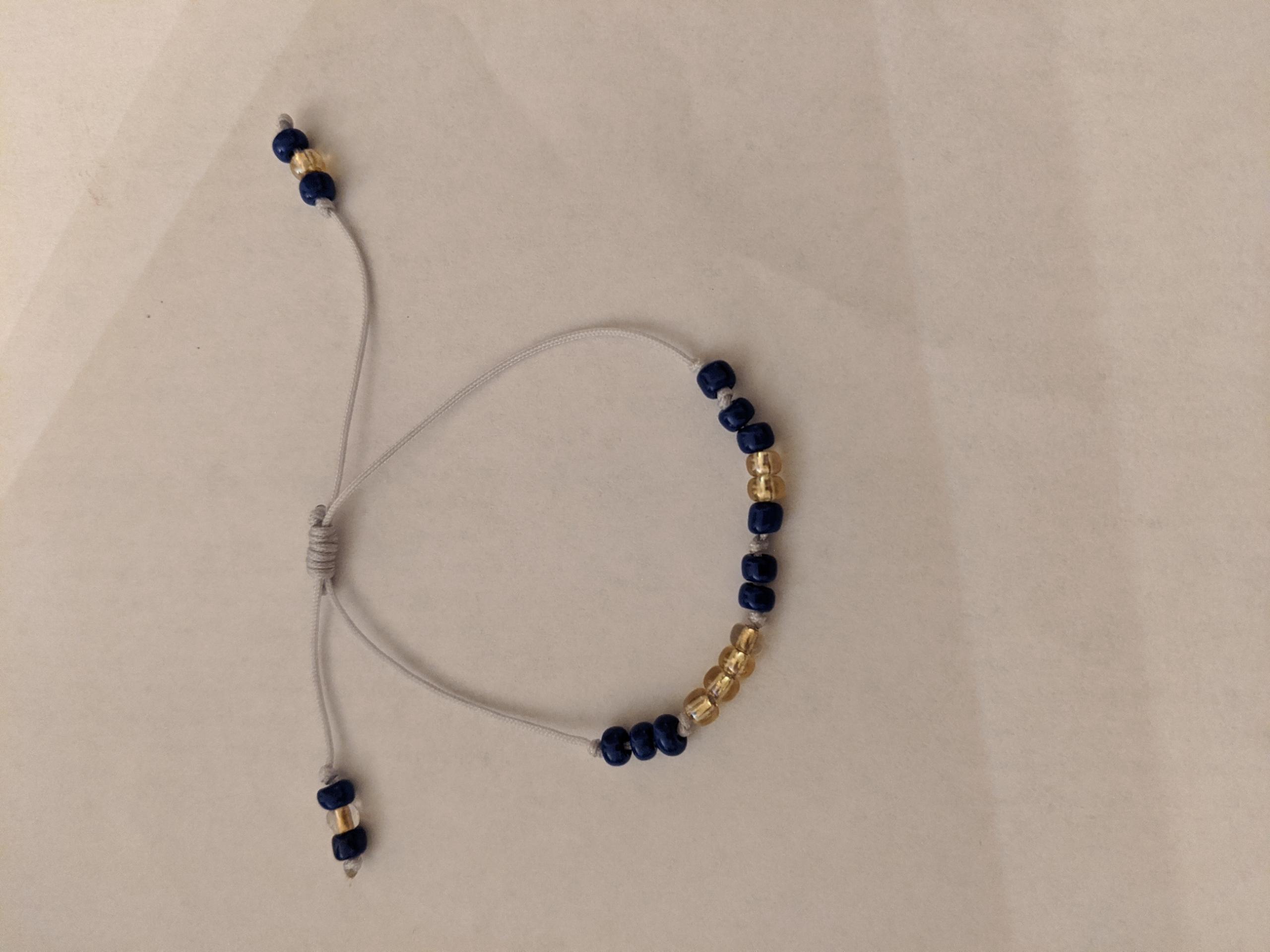 Erin’s lovely bracelet! I love how she put the knots between each letter… so you can actually decode it! 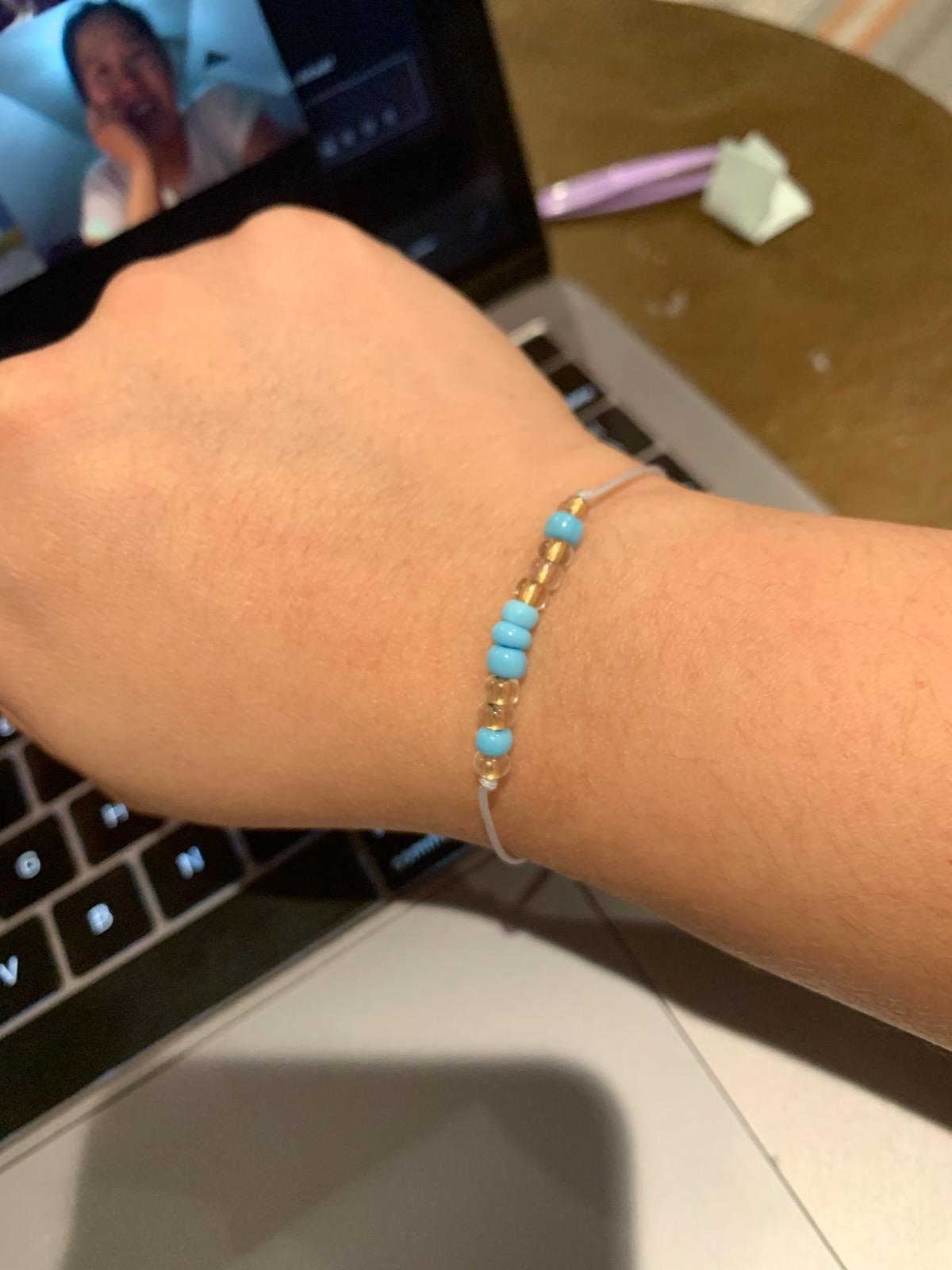 Mary showing off her lovely bracelet! 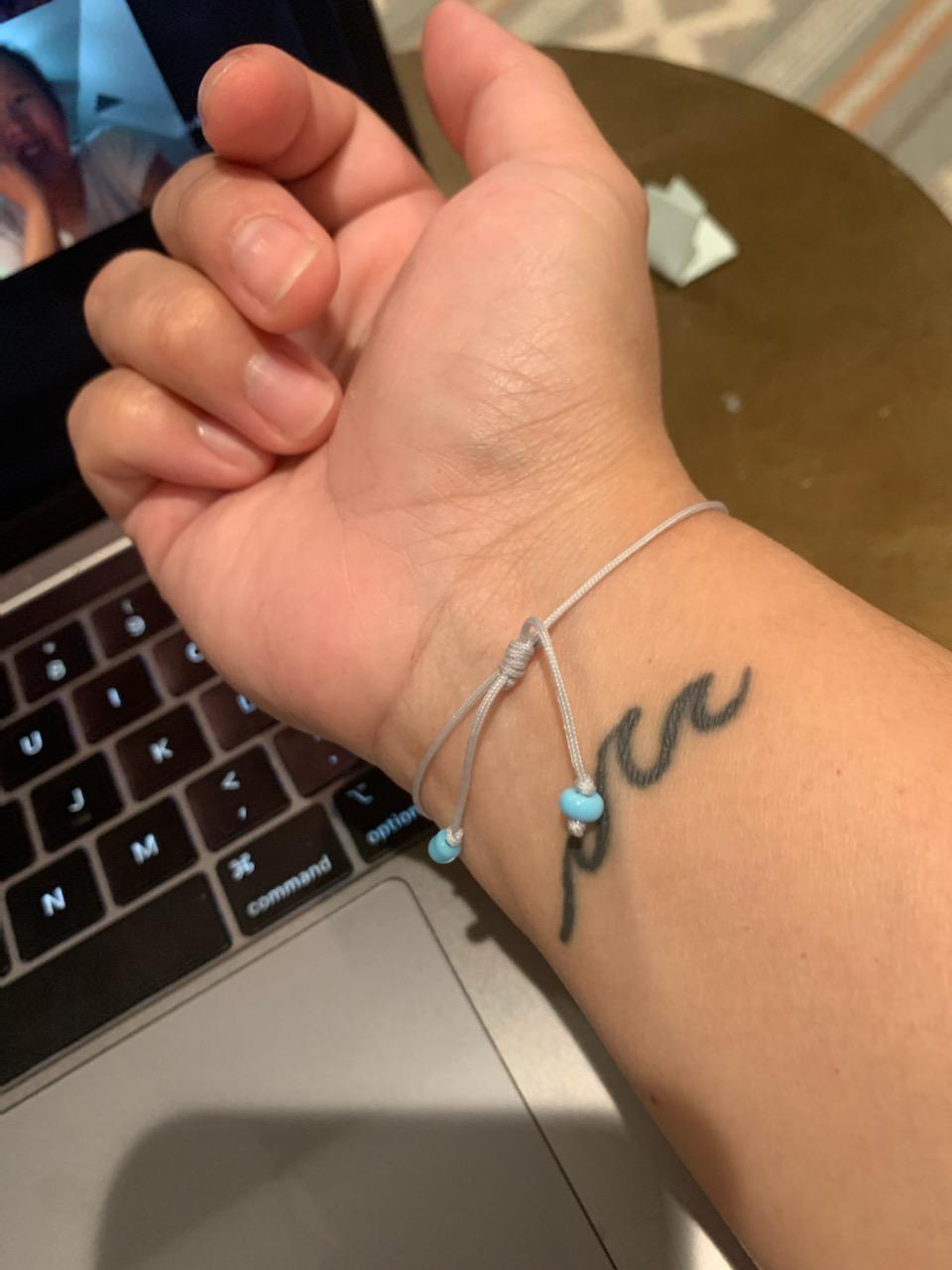 Mary’s bracelet – back view – it came out perfect! 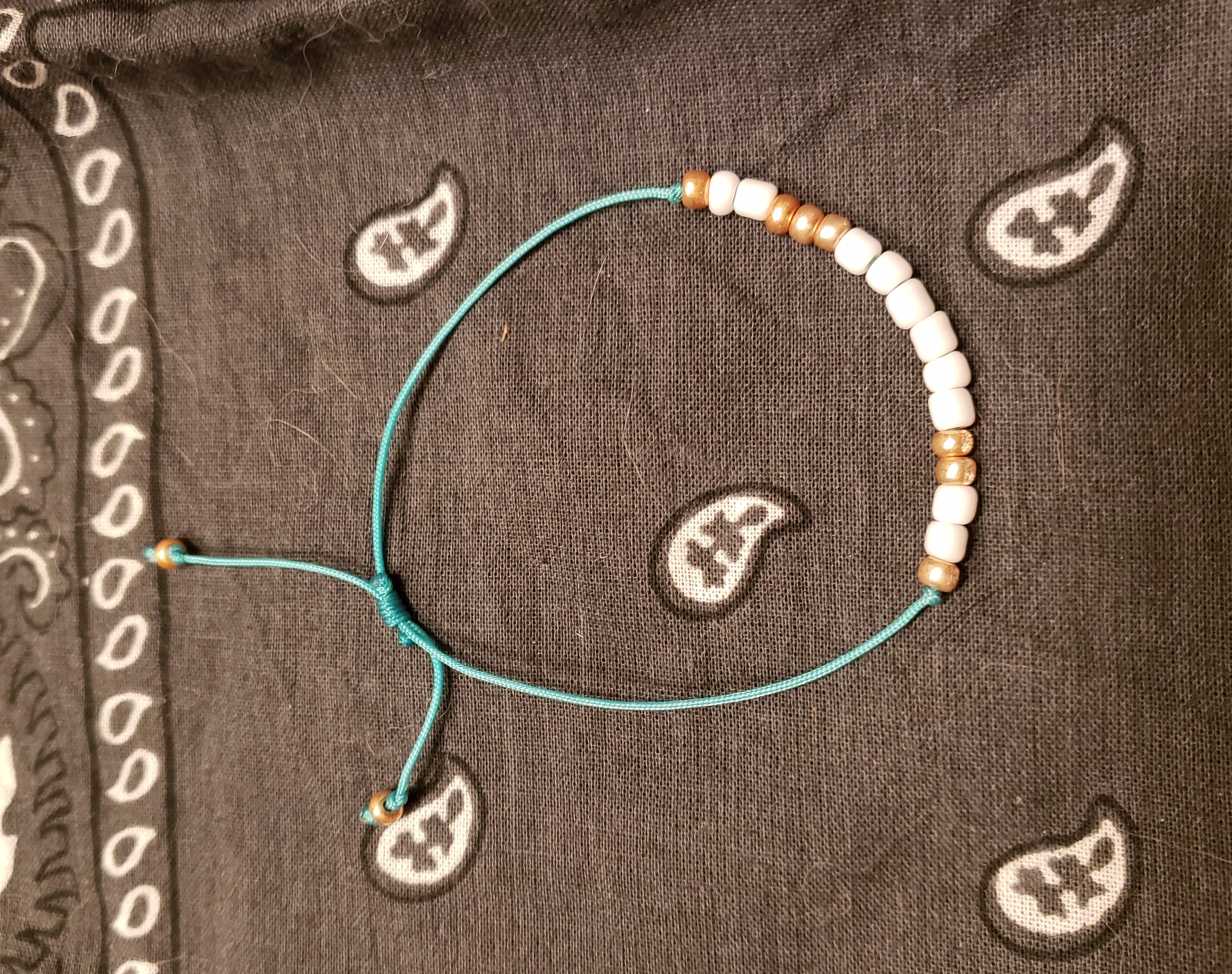 This entry was posted in Crafts & Sewing, Parties. Bookmark the permalink.