Sorry everyone who was awaiting my post last Tuesday morning – I had it all ready to go Monday night at 9pm (early, mind you) and apparently I didn’t hit “publish”.  I only noticed on my way to my car after work when I went to check to see if anyone had left comments and discovered it hadn’t been posted!  Kudos to those who noticed!

Will and I took vacation the last 4 days because my family was all in town!  It was so fun to see everyone again, and I am so sad it is already over.  Julius had fun playing with his cousin Finn, though I think he was a bit annoyed to not be the center of attention for once!  Ha!  As the first grand baby on both sides he is a bit spoiled.  He started recently acting out for attention, though I think he only does it to me.  He likes to hit, punch or hit me and then watch my reaction.  I hate it.  I started out saying “please don’t do that, you are hurting mama” in my no-bullshit voice, eventually I moved onto my stern voice.  Neither of those worked.  Will caught him doing it one time and hollered at him.  Julius of course started crying.  Later he hit me again.  I am hoping this is just part of the terrible two’s phase and he will outgrow it soon because it really makes me sad.

I’m secretly worried that he learned the hitting thing from this stupid video that he loves (one of only two youtube videos he has ever seen) of the minions singing Barbara Ann.  Will first showed it to him because he was eating bananas and wanted to show him a song about bananas.  Since then he asks us to play it on our phones, and we’ll each show it to him occasionally.    The other day I noticed that halfway through the video one of the minions punches another minion!  I honestly never noticed it until recently because it happens so quickly.  When I noticed it I stated that it wasn’t nice how the minion hit his friend, and that we don’t hit our friends.  I have never let him watch the video again.  Maybe someday I’ll cut the video to take out the hitting, because he really likes it and likes the little yellow guys.

After the snack scare, I decided to make Julius some cute snack bags.  Since the fabric was on clearance – they have minions on them.  The bags are nice and small for little hands and little snacks, and they have a convenient spot for a label!  Will and I had been writing his name on masking tape and attaching them to containers to label Julius’ snacks, but this is far easier.  If you’ve mastered the sandwich bags these are just as easy! 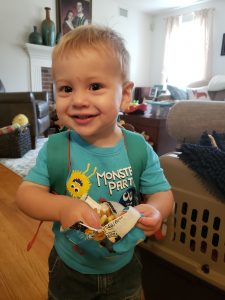 9. Pin the loop tape portion of the velcro to the inside edge of the bag’s flap. 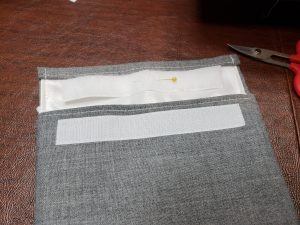 10. On the outside of the flap, center your 5″ strip.  Place a piece of parchment paper over the vinyl.  You can masking tape this whole thing if desired. 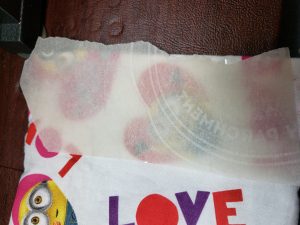 11. Placing the vinyl/parchment side down, stitch along all 4 edges of velcro. 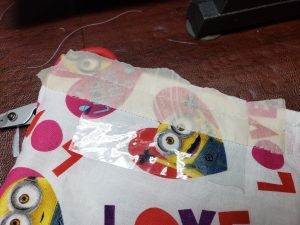 13. Trim the vinyl close to the stitching.

14. Insert small cardboard tag into the vinyl pocket to label. 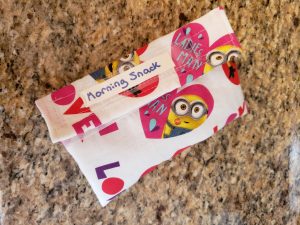 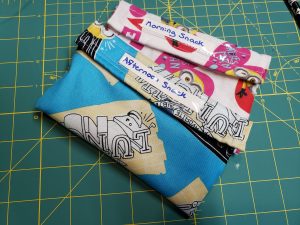 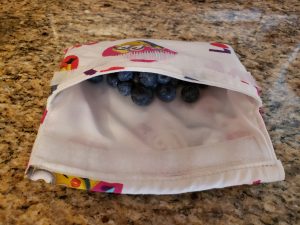