So I’m just now coming to terms with the fact that Julius listens to everything we say.  Yesterday when I went to take him out of his crib he kept saying “pop pop ooh ooh aah aah” over and over again.  When I finally figured out that’s what he was saying, I realized he wanted this book that Erin and Mark got him called “Poke a Dot – 10 Little Monkeys” which I sometimes call “Pop Pop Monkeys”.

Today he kept asking for “sit buh bye” which had me completely stumped.  I knew that he wanted to sit in the front seat of the car and pretend to drive (since he was gesturing wildly and frustrated at the front seat), but I had no idea why that was “sit buh bye”.  Later it dawned on me.  The first time I sat him in the driver seat of the car, a couple weeks ago, I closed the door and said “bye bye” (and pretended like he was driving away) which he thought was hilarious.  I completely forgot about it until today.

In other news, he really has started to push my buttons.  Will is the rigid, structured parent while I am the push over who tries to negotiate with her toddler.  Have you ever tried to negotiate with a toddler?  Let me save you some time and tell you it would be easier to teach math to a duck.  How did this happen?!  (I guess duck evolution just didn’t favor algebra skills.)

I really, really don’t want Julius to know I’m the push over, but it is already too late.  I have started to dread bath time because getting Julius to come out of the bath always ends in tears or else a 30 minute delayed bed time.  Will is out of town this week; it’s only day one of Mommy daycare and I was a solid 58 minutes late putting him to bed.  But, it wasn’t all dawdling or I (probably) wouldn’t have let it happen.  He accomplished a lot in that extra 58 minutes of time.  For the second day in a row he has done all his business on the potty before his bath AND he ate more vegetables (and way more dinner) than I’ve seen him eat in a week.  (He hasn’t eaten much in the last few days.) As an added bonus I didn’t have to deal with ANY tears.  I know you’re reading this Will, so, yes, I was 58 minutes late, and yes, I really am sorry there is no real excuse.  To make it up to you, I’ll make you some peanut butter bars.

My mom makes these peanut butter kiss cookies that Will has deemed “the best”.  She has tweaked the recipe so they come out perfect.  They are a lot of work.  Not only do you have to unwrap by hand a million Hershey’s Kisses, but you also have to roll the peanut butter batter into balls (these aren’t drop cookies, which are already too much work for me), then after cooking press a kiss into each one.  Who’s got time for that?!  (My mom makes the time for Will, who long ago we deemed the “favorite child” in our family.  For perspective she calls these “Will cookies”.)  I of course tweaked the recipe to make them as easy as possible so I could make them when we weren’t seeing my mom for a while.  While they aren’t quite as light and fluffy as my mom’s cookies they make a pretty mean peanut butter cookie bar in half the time. 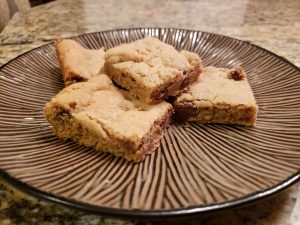 Preheat oven to 375.  Butter/grease a 13″x9″ baking pan. Cream together butter and sugars.  Add egg and mix until combined.  Add peanut butter and combine.  Add baking power, soda and salt and mix thoroughly.  Add flour gradually in 1/3 cup increments.  When thoroughly combined stir in chocolate chips.  Press evenly into the prepared baking pan.  Bake for 13 minutes or until cookies are puffed and a toothpick comes out clean.  Place on a baking rack and let cool in pan for 30 minutes.  Cut into squares and serve. 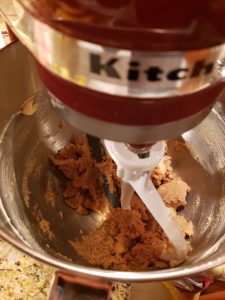 Cream together butter and sugars 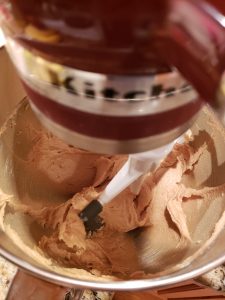 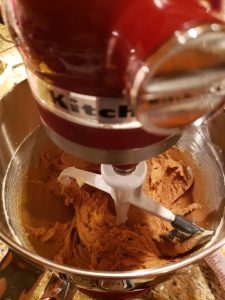 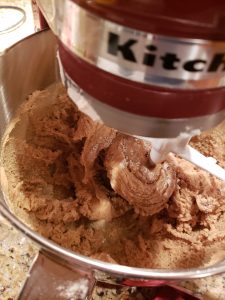 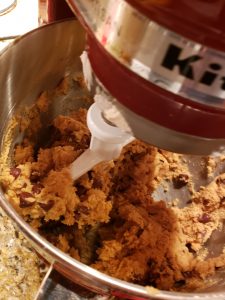 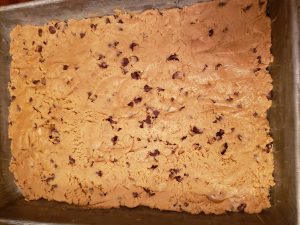 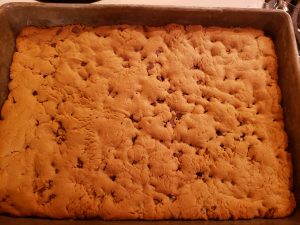 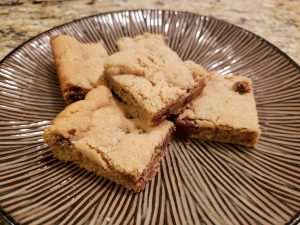 2 Responses to Push Over