Hello dear friends and family!  I have been away for the last 5 days on business travel in Austin, meeting lots of co-workers who I’ve never met in person, and seeing lots of co-workers I haven’t seen in years.  My poor co-workers had to deal with my vegetarianism while I was in Austin, a city known for it’s superb barbeque.  I tried to assure them that I could find something to eat anywhere, but they insisted on going to several places with great vegetarian options instead.  They’re too nice.

I hate being vegetarian!  The food is fine, it’s just that I feel like I am doing a disservice to people or being difficult.  My mom is especially affronted.  The other day my mom and dad took us to my favorite seafood restaurant.  After dinner my mom confessed that she was hoping the seafood options would have been enough to convince me to cave and order lobster.  Good try mom… but I haven’t caved yet!

One thing I do miss though is gravy and mashed potatoes.  Roast beef or roast chicken are great, but the real magic of roast meats is gravy.  My mom makes a truly incredible gravy from any roast meat.  My dad and I used to (mostly jokingly) fight to lick the spoon for the last drops of mom’s gravy.  For this reason I knew my only chance of surviving a vegetarian Thanksgiving was a great veggie gravy.  In advance of Thanksgiving I piloted a recipe for mushroom gravy that I thought was pretty great.  It didn’t come out quite as perfect on actual Thanksgiving day because I forgot to buy vegetable broth and couldn’t find Gravy Master anywhere in the south (for this reason I advise you to follow the recipe to the letter).  Even so, it was delicious and better than a no-gravy-Thanksgiving.  Will tested the gravy and rated it “great” (though he didn’t grow up with roasts with gravy, so he is only a novice in the joys of gravy). 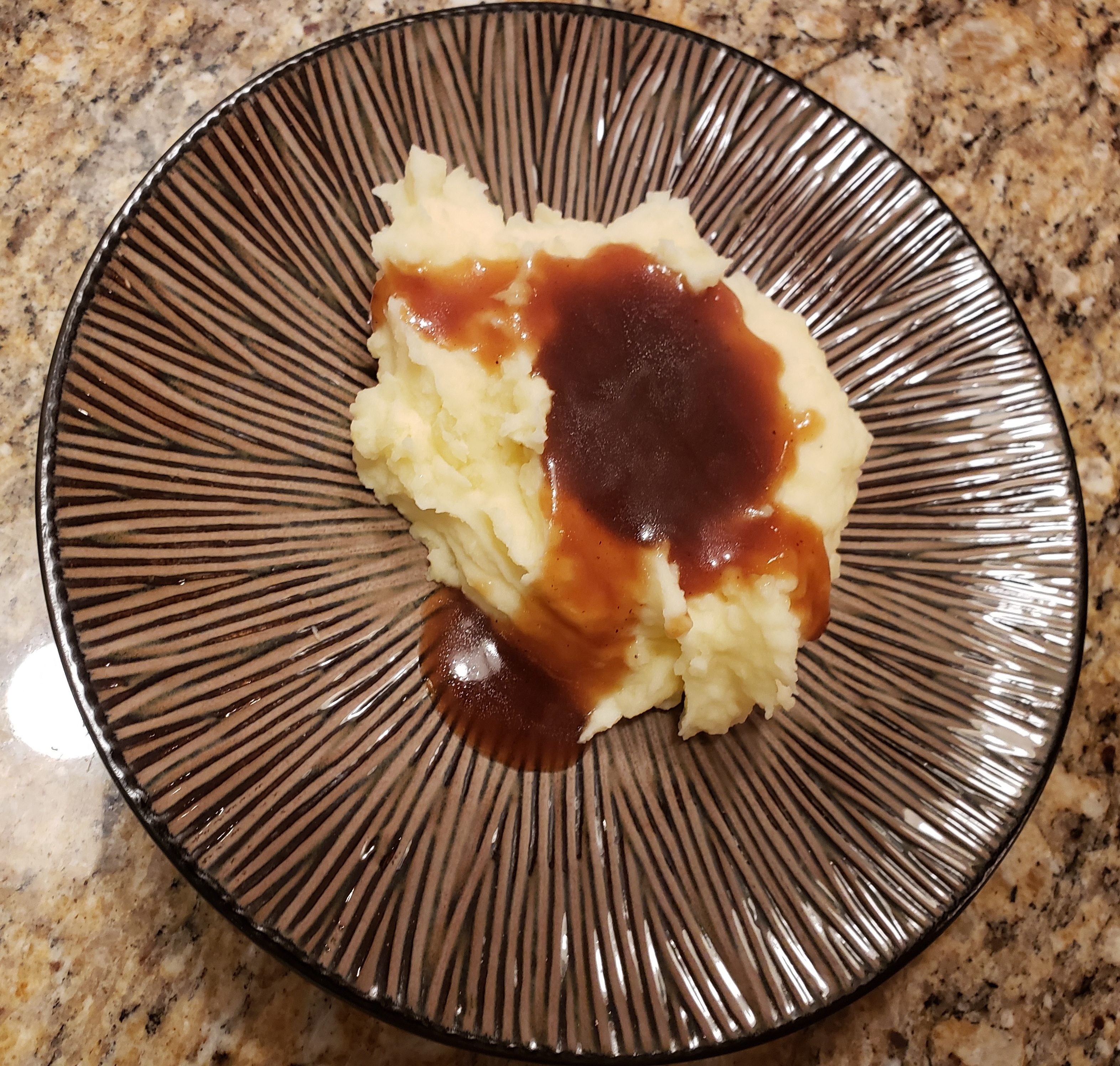 Pour 1/2 cup of hot water over mushrooms and let sit for an hour.  While mushrooms are steeping, carmelize onion in butter and olive oil over medium high heat in a saute pan.  Remove from heat when light brown.  Heat a kettle of water to boil, and deglaze the onion saute pan with 1/2 c boiling water.  Return the pan to heat and let come to a bare simmer.  Add mushrooms and mushroom liquid and a veggie bouillon cube.  Return to a bare simmer.  When the cube has dissolved and the bits of onion are off the bottom of the pan, strain out the onions and mushrooms, reserving the liquid.  Return the liquid to the pan, add Gravy Master, another 1/2 cup of water and salt and pepper to taste.  Again bring to a simmer.  Mix cornstarch into 1/4 cup of water, stirring until combined.  Slowly pour cornstarch mixture into simmering liquid, stirring constantly to prevent clumps from forming. 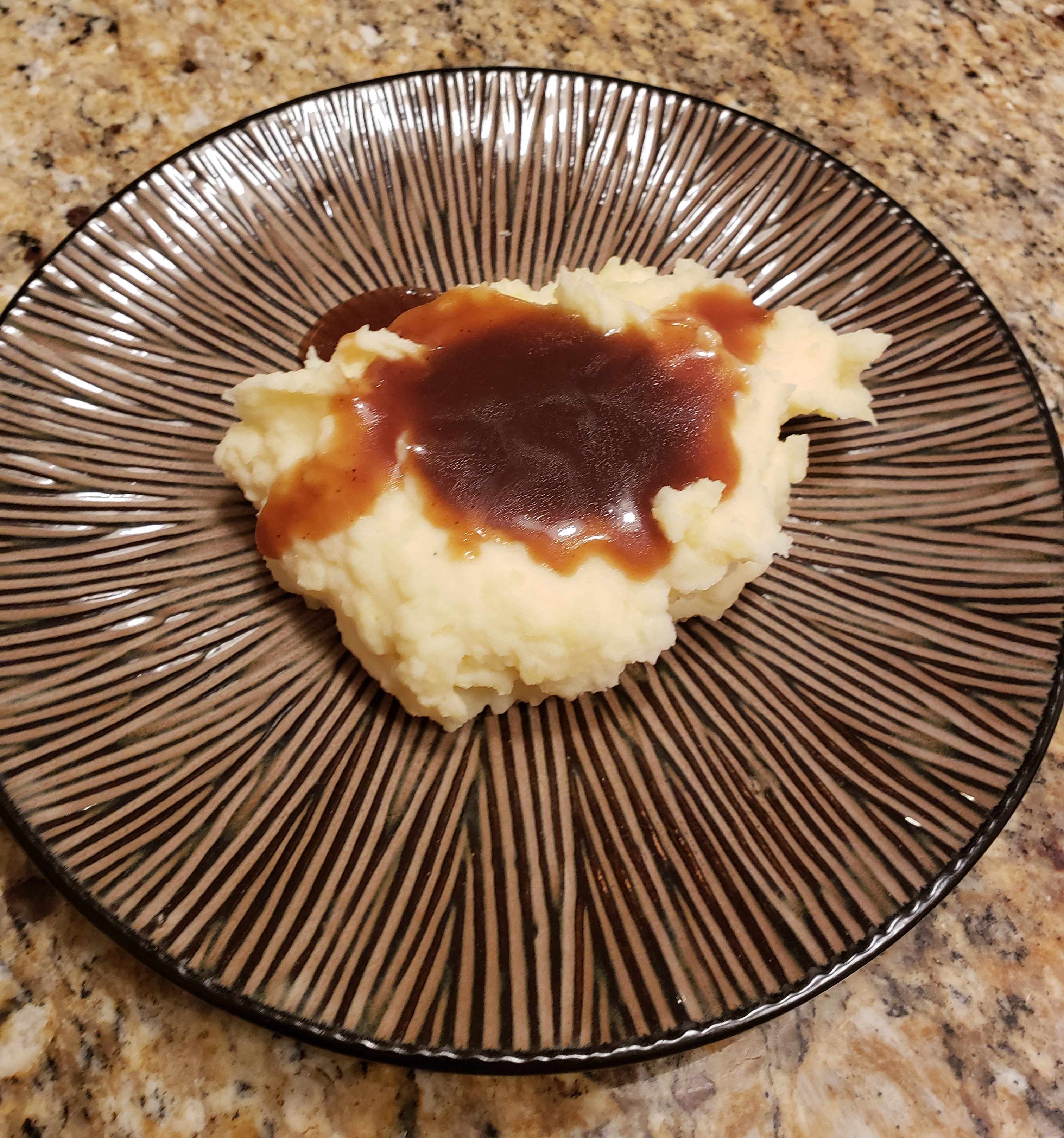