But What About the Bees?

Okay I’m ready to talk about it now… after two seasons of evasion, here’s what happened to the 2015 bees…

I got this package of bees from the same beekeeper i purchased them from last year – he gets them from a reputable farm in Georgia. Well this year I decided I was going to get them EARLY so if anything went wrong this time around I could correct it before late summer. I picked the bees up at the end of April. Well, if you’re familiar with New England, you know the winter of 2015 was pretty much Hell frozen over. 6 foot snow drifts etc. 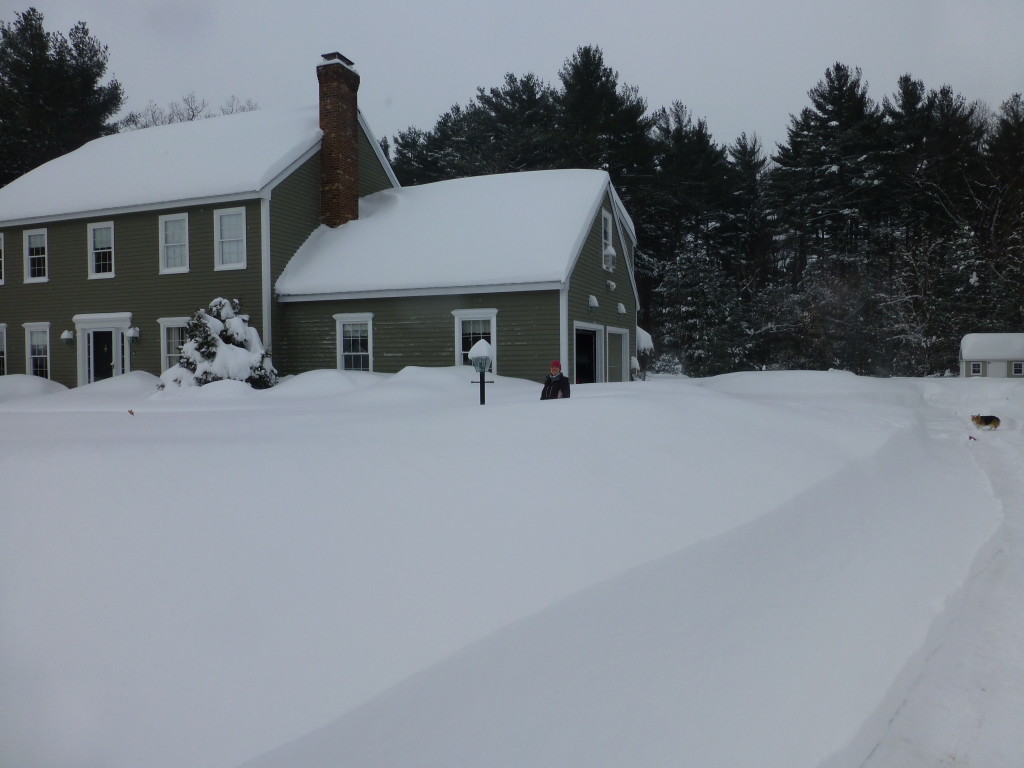 When the time came to pick up my bees the snow has ALMOST melted, but it was still only in the 40’s. If you remember from earlier posts, bees don’t leave their winter cluster until the temperature hits 55. I wasn’t going to risk it so I waited 2 days until the weather broke, keeping them in my basement and spraying them with sugar syrup periodically. I actually felt rather knowledgeable about the whole thing because while I was picking up the package, I dissuaded a new beekeeper from installing the package the day of in the dark and cold. She didn’t know whether to trust me completely (I guess because I told her what happened last year), and went inside to ask the owner… While I was leaving she told me he had given her the exact same advice. (+1 for the Lady Beekeeper…)

When I finally installed the package on a sunny 60 degree Thursday, I had lost 10% of my workers and they had used up the entire can of sugar syrup. I hived them, this time making sure not to drop the queen into the package of 1000’s of bees. It was my easiest hiving yet, and I immediately provided them with 5 gallons of fortified sugar syrup and a pollen patty. Things looked good – my azaleas bloomed shortly thereafter and were crawling with bees. Then I went for the first inspection – right on time.

I saw literally EXACTLY what I had seen last year – no capped brood except drone cells, and really spotty egg laying. Great. The only difference was that this time I found the queen. I knew what I had to do, but now I was extremely angry that I had gotten 3 terrible layers from the same beekeeper. And I really like this beekeeper! He is such a nice guy! But I couldn’t risk a 4th dud. Not at $25 a pop, and the risk of losing another $100 package of bees. I called every beekeeper within 50 miles. I even called Rossman Apiaries directly (the Georgian apiary where the package was from). No one had any queens because it was too early in the season! Plan backfired!

I finally called my local bee store and I told the woman over the phone that this was my 3rd bad queen. I asked her how I could guarantee my next queen was a good one (even though I didn’t think there was any way). She had no idea, but I figured I’d bite the bullet and try one last time with this source, rather than let my colony just die with the bad layer. He was very nice as always and even gave me the queen for free. Oh, did I mention my friend from California was in town for the weekend while all this was happening? Beekeeping has such touchy timing that I knew I had to get a new queen this weekend or risk the whole hive, luckily my friend understood.

The next part is the most interesting but I don’t have any pictures of it so you’ll have to imagine it. I put ratcheting straps around the hive and Will and I lifted the whole thing on a wheelbarrow and moved it 50 yards from its resting place. (Will wore my suit, I just put a veil and gloves on for this part, thank goodness for the extra veil.) While we’re doing this my neighbor walks over and starts asking about the bees. Very inopportune moment. I’m not sure why people like to come talk to me while I’m gowned up, you would expect it to have the opposite effect. When my neighbor eventually left, I started sweeping bees off the frames, one at a time and then Will placed the frames even further away when we guaranteed they were bee-free. Then we moved the whole bee-free hive back to its resting spot (where some foraging bees were already gathering) and added the frames and new queen.

Two weeks later I opened up the hive again… to see the exact same thing. The queen was still in there, but there was only an egg in every 8 cells or so. Better luck next year…